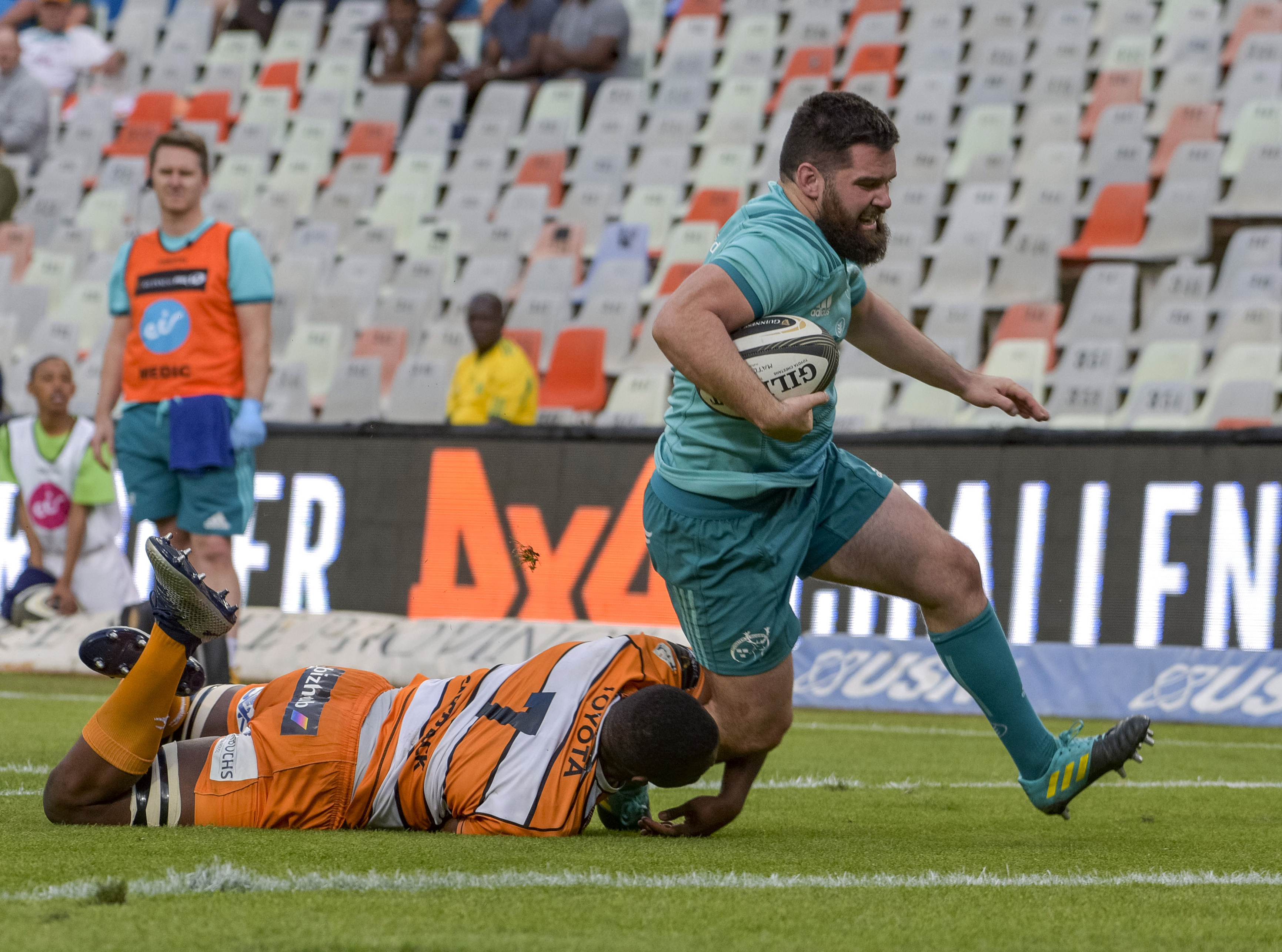 Rory Scannell standing over a kick near the halfway line in the dying minutes of a budgie smuggler tight PRO14 game?

Wasn’t this last week’s script? If it was, nobody bothered to change the ending – thankfully. Scannell stepped up, stared down the posts and, just like last week, booted the ball so hard there was almost a shockwave after contact. Three seconds after contact, the ball sailed through the Cheetahs posts with enough pop that the ball boy near the hoarding had to step back and reach up to catch it – it had more legs than a millipede.

That penalty kicked from the car park was enough to put Munster four points up with four minutes to play. From there, Munster’s job was simple – take the restart, hang onto the ball for a phase or two to drain the clock, box kick, chase, realign and then trust your D knowing that the Cheetahs were out of 3 point range.

A botched exit from Keatley made things way hairier than they needed to be but that in itself gave Munster’s Young Bucks a chance to make a name for themselves at the tail end of a brutal block of games to open the season. A penalty was conceded in the aftermath of the blown exit, which allowed the Cheetahs a shot at the Munster 5m line. 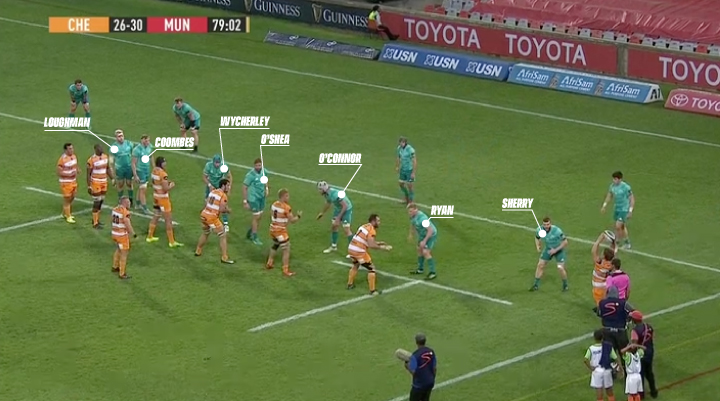 Jeremy Loughman, Gavin Coombes, Fineen Wycherley, Darren O’Shea and Sean O’Connor have less than 50 Munster caps between them but they – along with Ryan, Sherry and Cloete – would have to defend a four-point lead against a Cheetahs maul drive on the five-metre line with a minute left to play. If the young lads were for breaking, it’d be here that you’d hear the crack.

They pressed the Cheetahs towards the touchline, pinched them on the edge of the touchline drive and that caused a choke point that separated the ball carrier at the back from the wall at the front. Chris Cloete did the rest to kill the maul stone dead.

A few seconds later, Cloete forced a spill from the Cheetahs to give Munster a scrum that would see out the game.

As endings go, let’s say it was a tight one. But seeing out tight endings like this is exactly the kind of fire that can forge young players into who Munster and Ireland need them to be.

It was a fitting end to a game that was never quite what you expected, even when you were watching it.

The first half was a picture of territorial and situational control from Munster. We limited the opportunities presented to the Cheetahs to attack in transition and defended their set-piece phase play quite well for the most part.

That isn’t to say that there weren’t issues;

This linebreak came off the back of a good centre-field ruck position and their ability to find a slow edge defence with O’Shea and Botha tracking across. Smith hit the line right as Botha was tracking across Lee and the pacey fullback didn’t need much invitation to scorch past on the outside. Wootton did excellently to hunt down Maxwane with the try line winking at him.

Munster had been warned on the Cheetahs danger at the edge earlier in the game;

Lee – again – hit a gap on the edge of Munster’s defence and put Rhyno Smith through the gap. Maxwane – again – was denied with the try line beckoning him. Shane Daly, slotting into the #13 shirt at relatively short notice with Arnold dropping out to due concussion symptoms as part of his RTP, looks to be the one “responsible” for this linebreak but he does OK here for me. The real damage was done here;

Oliver’s (Orange #6) targeted blocking line on Bleyendaal created the hole for Lee and the rest followed from there. Munster conceded a try after Cloete saw yellow at the tail end of a penalty chain that was started by this one conceded by O’Byrne.

About as clear a case of being held into a ruck as you could hope to see, in fairness, but outside these incidents, Munster managed the half quite well. Johnston was kicking and distributing well. The scrum and lineout were effective and we were taking our chances well when presented with them. Botha scored off the back of a Mathewson quick tap scrum penalty and Kevin O’Byrne barrelled over after a powerful Munster maul. To go in 15-5 up at halftime was about as good as could be expected but it was never going to be that simple. Sooner or later, the travel and altitude would start to catch up with Munster.

It didn’t happen in the first 10 minutes of the half anyway. Bill Johnston scorched onto an O’Byrne offload to send a superb pass over the head of Maxwane for Coombes to finish.

From there though, the wall hit and the wall hit hard. That isn’t to put the entirety of the Cheetahs comeback down to Munster altitude and travel fatigue but it played a part. The other part – the majority – was down to the exhausting style of rugby that the Cheetahs used to exploit the first hint of Munster black smoke.

In the build-up to the penalty that would lead to the second Cheetahs try, the Bloemfontein franchise went touchline to touchline with a ruck marking the extremity of each attacking sequence.

That kind of retention, pace and width will cause a side with as many heavy forwards as Munster had to drop off in their spacing and alignment. Munster made changes straight after that try was conceded (off a nice 5m lineout gimmick, in fairness) but the fatigue looked to have set in collectively.

The Cheetahs scored two more tries in quick succession. After a quick tap penalty, the Cheetahs exploited some average pillaring off a ruck to score their third.

O’Shea was left with a little too much to do at “B” to track a scrumhalf as quick as Venter. All of a sudden, the Cheetahs were back in it. A breakdown transition and wide running from the Cheetahs found tired defensive alignments and enough space to craft a bonus point try and the lead with it.

Pace and width against a side hitting the wall will create opportunities and the Cheetahs are experts at generating these in Bloemfontein.

Munster – 22-5 up at one stage – were looking at a 26-22 deficit with the clock ticking towards the last 10 minutes. The Cheetahs were always going to have a purple patch in the game and they certainly took advantage of it.

Munster had a few questions to answer with 15 minutes left to play.

Up step Duncan Williams and Kevin O’Byrne. The Munster replacement scrumhalf charged down an exit to force a Cheetahs’ lineout and when Kevin O’Byrne stole one clean at the tail of the lineout, the comeback was on.

After being held up over the line, Munster reset off the scrum and managed to generate the space for Keatley to put Haley away for a Munster bonus point and the reclaimed lead.

The end game, you already know.

These five points on the road but an exclamation point on an incredibly difficult block of games and see the squad off on a three-week break before heading to Parma to face Zebre. We lie second in Conference A and top of our Heineken Cup pool with our away trips to Exeter/Dublin/Cardiff/South Africa completed and with Glasgow out of the way for the year bar playing them in a playoff. Given the proclamations of doom floating around in the press barely a month ago, that’s a pretty good return from the start of the season considering the relative difficulty of the away games and the strong performances at home.

This result in Bloemfontein is superb. Five pointers on the road make all the difference in this conference and this one will pay off down the line if the home form holds as expected. There are elements to pick at of course – and I’ll do just that on the good and bad on TRK Premium this week – but overall, five points from South Africa will do me any day of the week.

The Wally Ratings: Cheetahs (A)

I thought Chris Cloete, yellow card aside, had some big moments in the winning of this game. He was a key part of repelling the Cheetahs right at the death and he made a nuisance of himself at the breakdown when the Cheetahs wanted pace.

His turnover on 70 minutes was a key part in altering the flow of the game as the Cheetahs came back in the aftermath of Haley’s try. He’s as tough as a steak from Dealz, this guy.

Fineen Wycherley had a standout game for me on the blindside. He’s 20 years old but already looks so physically developed and “pro-game ready”. This is exactly the type of abrasive, physical performance he’ll have been looking for. What a prospect.

Jeremy Loughman came off the bench and had a superb impact in the set-piece, in defence and with some superbly aggressive carries. He took his recent excellence for the A team into the PRO14. Really good stuff.

Bill Johnston had a serious game here. His assist for Coombes was superb but his passing and kicking were serious highlights. He missed one conversion but nailed the rest in tricky kicking conditions. His tactical kicking, line kicking and exits were seriously good too.

He’s got some development to do yet but on this evidence, Bill Johnston has all the skills to pay the bills. Cash money.

The five-star man in this game, though, is Kevin O’Byrne. Man, he was good. His ball carrying, offloads, lineout basics and scrummaging were top notch and he had a crucial hand in three tries – the one he scored, the one he offloaded to Johnston and the one where his carry under the posts set up the Haley winner.

This was a seriously impressive all-action performance from O’Byrne and is right in the vein of excellence that he showed around December of last season. The South African commentators might not have known what his name was during the game but they certainly will know it now. ★★★★★