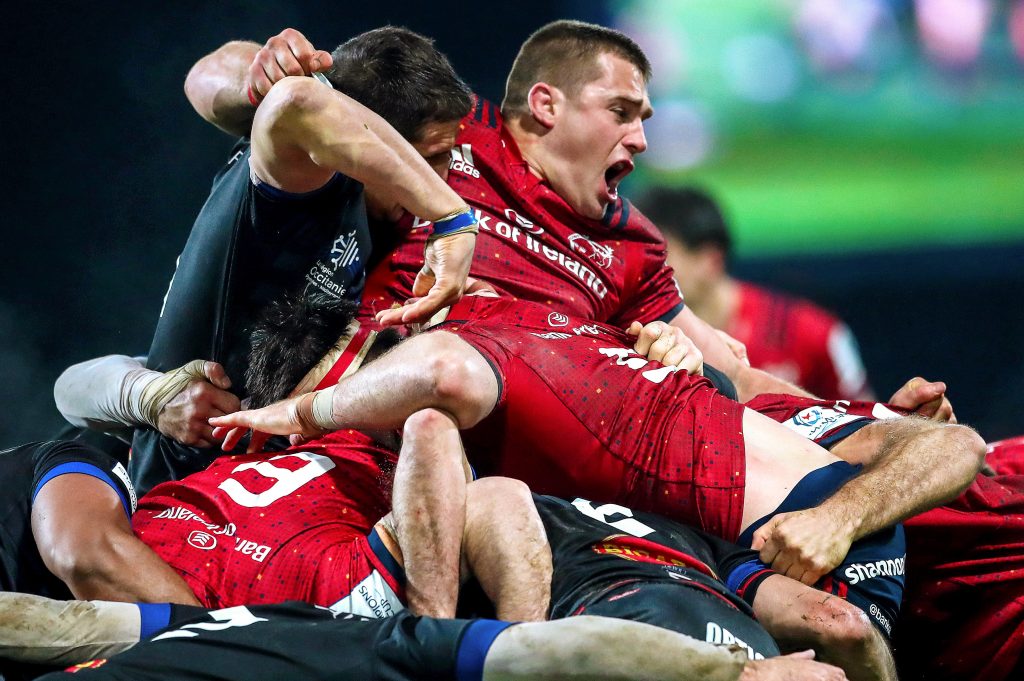 Munster just weren’t clinical enough to get the job done when the job needed doing.

The thuggery that went unpunished by Wayne Barnes almost takes place in a separate universe to the matter of the result. Sure, had Kockott seen red in the build-up to Castres try and Conway awarded a penalty try for the early sliding tackle from Urdapilletta we’d be looking at a different result. Maybe in some alternate universe, Three Crimson Lords are writing the Paulie Ratings about another win for the Good Guys but in this one, the hard truth of the matter is that Munster left 12 points on the kicking tee and should have had another three right before the break.

Like, yeah, Wayne Barnes and his crew were complicit in the worst refereed game of rugby I’ve seen from a foul play perspective in nearly 10 years but, besides that, Munster still should have won this game handily.

The killer point is 12 points – four missed penalties – but looking at those, I’d say one should have gone over and the other was kickable. The other two, Murray’s long-range effort and Carbery’s go from the 10m line cross, were difficult kicks in the conditions.

It’s a reductive way to look at the winning and losing of the game, I know, but it is what it is. Goal-kicking is a binary game. You get it or you don’t. Rory Scannell made his kick against Glasgow and he’s the hero but if it drifted off to the left, he’s the guy that lost the match. It’s a cruel part of the game in a lot of ways.

Kicks aside, Munster just didn’t create that were needed to put away Castres. When opportunities did arise, our decision making was snatched and hurried. The most egregious of these was this bit of thinking on the stroke of halftime.

I get the idea – hit Castres while they’re down to 14 and a little gassed – but the pass was to our lone forward on that side, meaning he was isolated from the start and everything went downhill from there.

The key part of that GIF was the loss of the ball on the gain line and the subsequent swamping of the breakdown by Castres. Were some of them flopping all over the ball – yeah – but to my mind Munster just weren’t challenging the gain line as we needed to in these conditions.

When you go through the teamsheet, two names stand out by their absence; Jean Kleyn and Chris Farrell.

Kleyn gives Munster a strong physical presence in the middle of the field on phase play – not even mentioning the extra power in the maul and other set-piece areas – and we missed that badly against a Castres side that clustered up in defence and made quick ball to the flanks more difficult to obtain.

The initial pod of Stander, Kilcoyne and Beirne creates the cardinal sin of losing gain line and generating slow ball. Those three players were our primary heavy ball carriers in the pack but weren’t able to regularly pressure Castres in the first pod out from the ruck on plays like these.

That leads to trouble further out the line. Essentially, it stymied our attack on a heavy pitch. Kilcoyne and Beirne carried the ball 10 times each in pretty heavy traffic and only made 18m total. Those numbers aren’t everything but they do tell a story in one way. Stander made a good bit more ground but he was used – interestingly enough, actually – as a heavy carrier on kick transitions a lot and that inflated his numbers. He was the standout Munster forward for me but needed another big carrier there to loosen him up in the middle of the field. That’s Jean Kleyn.

I’ve been on about Chris Farrell a lot over the last few weeks but the difference he gives to Munster’s attack is significant because of WHERE he compresses the opposition defence. He allows Munster to widen our attacking line in a way that anyone replacing him currently doesn’t. That isn’t to say that Scannell and Arnold are poor carriers of the ball – they aren’t – but they just don’t have the same impact as Farrell does. Here’s a good example;

We lost the initial collision off the maul and that made every subsequent phase harder to manage. That lack of a big ball carrying option in the backs put a premium on our handling and support lines but we weren’t really at the races here.

You can see Munster trying to circumvent the ball carrying issue on this lineout play – a four-man scheme that left Kilcoyne, Stander and Cloete in midfield – and how we missed a big carry from the likes of Farrell on the second phase. Watch;

Castres weren’t stressed with their defensive alignment and it left us with a fairly high percentage play once the ball came to Carbery. I think we were looking for Scannell and Arnold to hit a block screen on the seam between the last forward and Urdapilletta so Carbery could attack the line and bring Earls in around the corner. 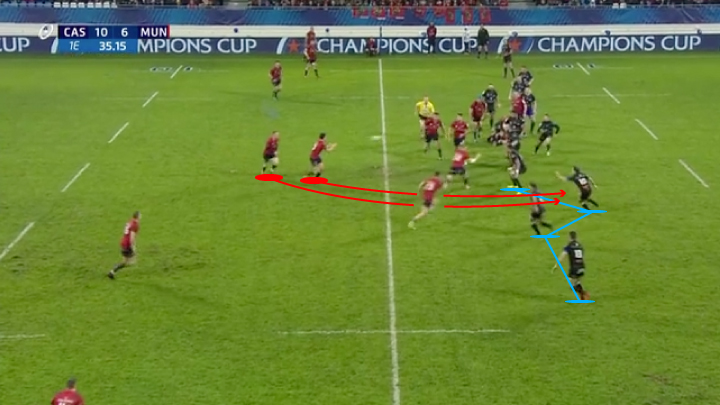 But when Castres didn’t buy the threat of our midfield, that left a compressed line for Carbery to attack and, rather than send Earls into a brick wall, he bailed out of the move. 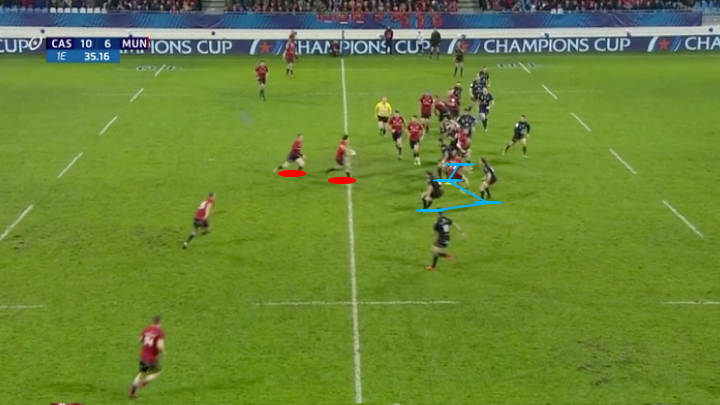 That was a rough guide to most of our night with ball in hand. We needed guys who could compress Castres to give our wide work an extra few steps of space in the heavy conditions but didn’t have enough firepower to threaten them very often

Combine that with a lineout that started to fall apart later in the game under pressure from the Castres counter-jump and, you have a game that boiled down to your kicks. Make them, you win. Miss them, you lose.

The other key part was the ruling on Munster’s non-try. As with a lot of our work this season, it came from a kick transition with Carbery recovering a kick excellently to set up Stander for a carry.

From there, Munster recycled, attacked Castres as they reset and, for the first time in the game, got a look at green grass. I covered the aftermath of this in the linked thread above, so I won’t go over it again, but the manner in which Munster scored this “try” will have been pleasing in some regards.

The addition of Botha to our carrying ranks in the middle of the pitch started to pay dividends late in the game and, suddenly, Munster were playing with a bit of front foot ball. After four or five good carries, Murray spotted space and only a forward pass from Conway prevented a real look at a try.

From there, the game went arseways – more so. A scrum penalty was followed by a further, worse one against the head up the pitch. Sure, Castres went a bit early but we were painting a tonne of bad pictures here and, with that, the game was pretty much gone.

That leaves Munster clear at the top of the pool and still in control of our own destiny but rueing an opportunity lost in the south of France. I still think we’re a shade off where we need to be from a squad depth perspective and, to an extent, that was a big factor here. I’m pretty comfortable saying that if we start two wide forwards in O’Mahony and Cloete, we’ll struggle to impose ourselves against big opposition with two loosehead locks (Beirne and Holland) and only one notable heavy carrier in the front row without a big ball carrying midfield threat. You can have that pack combination but you need a heavy hitter in the backs to compensate. You can have Scannell and Arnold in midfield but you need an extra heavy carrier in the pack to compensate. Until we have those options outside Kleyn and Farrell, you’ll see days like this in these conditions.

A loss here isn’t the end of the world but it does raise a few issues heading into Christmas that we could have done without.

The Wally Ratings: Castres (A)

Joey Carbery didn’t have much to look at with ball in hand until later in the match when Munster started to gain some front foot ball but everything up to that found him behind working with subpar possession. His kicking off the tee was a disappointment but only one of his three misses was a disappointing one. A below average showing from him in this one.

I thought John Ryan had a good day out here. He was excellent in defence and took his man to the John Ryan Woodshed on multiple occasions in the first half, earning three scrum penalties on his side.

Tadhg Beirne didn’t have many standout Tadhg Beirne moments but tackled well and carried gamely all evening. Arno Botha had a good impact during his time on the field and made a serious case for a place to be found for him in the starting XV.

I thought CJ Stander was the standout starter for Munster. He’s trimmed down a bit since last year, it seems, and that has really added to his dynamism. Munster used him as a heavy carrier on kick transitions, which lead to the Conway “try” but he was visible there earlier too – this carry was a highlight.

A serious player who’ll have a lot to say this season yet.