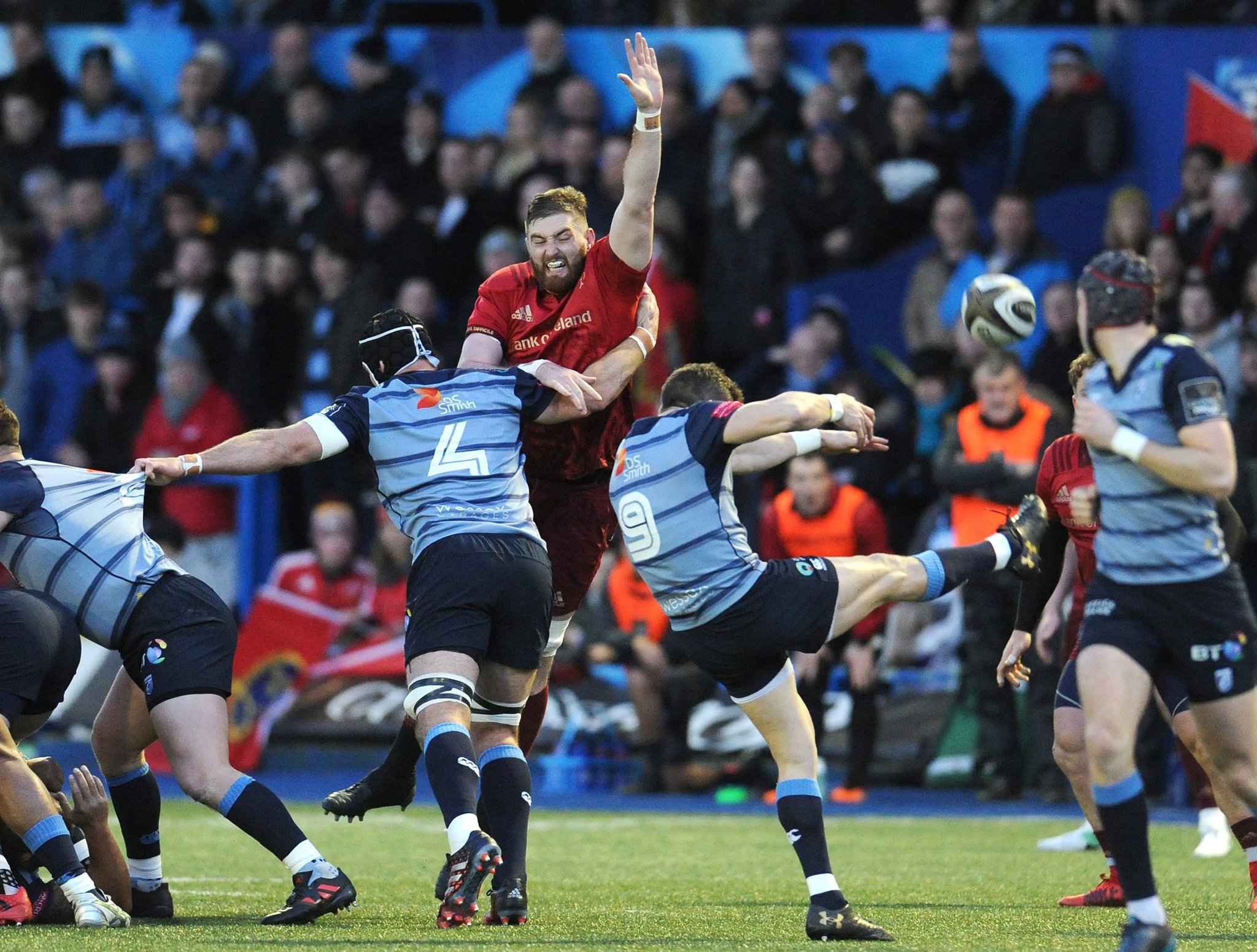 There was very little of what you might call “good” about this performance from a Munster perspective.

Let’s just get that out of the way at the start. The good parts – some of our mauls and the 12 minutes of pressure we exerted after halftime – won’t be enough to comfort anyone of a Munster persuasion that watched this game through various progressions of horror. Through their fingers after their 17th minute, holding a cushion after the opening 10 minutes of the second half and behind the couch thereafter.

The losing bonus point that we burgled in the dying minutes will be the only important thing to take from this game and may yet be significant at the end of the six games we have left in the regular PRO14 season. Most everything else can be filed in the “What Not To Do” GIF folder for use as Clockwork Orange-esque brainwashing/strange and unusual punishment.

The two big talking points will be the kicking tactics and the selection decisions leading into the game. This was a strong Munster side but a heavily disrupted one from the week before. It certainly played like it for most of the game but to understand why so many changes were made, you have to take squad dynamics into consideration. Van Graan spoke during the week about a need to involve the entire senior squad over the course of this block of games and there’s nothing wrong with that – it keeps everyone in a position to step up the first team. The problem with it comes when you make 10 changes week to week and produce a performance like we saw here. If it works, it’s expert rotation. If it doesn’t, you get a kicking for disruption. The margins are small.

The same small margins can be used to explain the kicking tactics used for most of this game. The tactical idea behind it was sound but the execution let us down badly. I wrote pre-game that Munster might find it hard to resist Cardiff’s slow kick chase reset and we certainly seemed to go after it in this game.

That’s probably why we kicked like this quite a bit;

I know this is painfully slow but there is logic to it.

In this instance, we actually got a positive outcome from the kick in that we got a scrum platform to attack from without having to carry the ball to do it.

The problem was that we didn’t get a good result from most of the 12 other box kicks that we tried in this game. We were definitely working to plan here – out ruck cleaners took special care to elongate the ruck to give Williams the best base to work with. Too many of our kicks ended up looking like this;

Cardiff got the ball back inside our half fairly cheaply. We didn’t kick well but a lot of our chasing wasn’t anywhere near good enough either.

We slowed the game down, killed the tempo and then kicked the ball away to no gain way too often. In the end, we were only eating away at our own advantage, especially when Cardiff were down a man.

If you eat up 12 seconds of your own sin bin advantage and don’t get the ball back, you’re going to take a kicking post-game. Did Cardiff get away with some dodgy escort lines? Yes, for sure – and you see them above – but we stuck at this tactic way, way too long when we weren’t getting any change out of their back three.

Most of our best work came off the back of penalty advantage earned through the maul, where we consistently made good ground. When we chained the mauls together, we got into position to hurt Cardiff around the phases. Even here, I thought we lacked a little oomph closer to the fringes but generally, when we got near Cardiff’s 5m line on a multiphase play, we got the reward. After 8 good phases, Stephen Fitzgerald could have parked a 747 in the space he had to work with on this play;

At that point, we had Cardiff on the ropes and, with 8 minutes to work with, another try would have probably seen us ease out the rest of the game.

Instead, we lost possession on a maul (when we might have had another penalty for side entry) and when we got the ball back we went back to cannibalising the clock;

Six seconds here, twelve seconds there, and before you know it the Cardiff sin-bin was over and our grip on the second half began to loosen.

From there, I felt two key decisions went against us. This penalty on Mike Sherry for side entry stretched Cardiff’s lead back out to 7 points wasn’t one of them. This is an example of some of the poor decision making we brought on ourselves in the last quarter.

The actions of a man who hasn’t played at this level for a while.

My two bones of contention would be the actions that sequence that lead to Cardiff stretching their lead to 10 points. This intervention from James Cronin was judged to be illegal for “having a second go at it” when a few minutes earlier, Cardiff were rewarded for the exact same thing. Harsh, but it was the luck we’d earned.

From there, Munster had five minutes to make something happen that we never really looked like doing outside the third quarter – score a quick try on Cardiff and make a go for the lead.

We can bitch about the penalty that took the game away from us but we didn’t really deserve to win here anyway. We just didn’t fire enough shots.

We had 54% of the possession (62% in the second half) but none of our forwards carried the ball more than 10 times. Most of our forward carrying took place deep inside the Cardiff 22 after we’d earned the position through the maul and that let the Blues off the hook in the midfield exchanges.

We challenged their cardio on the kicking, for sure, but when the time came to roll the dice on wider plays off midfield ball, we just didn’t take the chance. I’ve heard a lot about how Munster didn’t respect Cardiff enough here – I think we respected them too much. We didn’t challenge them on turnover ball, we didn’t attack with enough width and pace off of set piece and we didn’t work them hard enough ruck to ruck.

That’ll be the frustrating thing for Munster in the video review, that and the needless turnovers from hand and boot.

The relevance of this game is limited. It doesn’t mean much beyond entering a game with too many key guys having poor nights. The real question is this – can we forget about this in time for Glasgow in Cork?

The Wally Ratings: Cardiff (a)

As per usual, players are rated based on their time on the pitch, if they were playing notably out of position, and on the overall curve of the team performance. I didn’t rate Dave O’Callaghan due to being on the pitch for only 11 minutes.

This was James Hart’s moment;

Without this bit of quick thinking, Munster get nothing from this game. Hart’s work to whip this ball off the back of Cardiff’s scrum bought Munster the opportunity to kick for a losing bonus point, which Bleyendaal duly landed for his key moment.

I thought that James Cronin and Jean Kleyn had a decent impact off the bench without being overly outstanding in anything. Cronin was particularly unlucky not to win a penalty late in the fourth quarter.

Robin Copeland and Jack O’Donoghue didn’t have great games by any means but they both had enough decent moments to stand out for me on the second watch. Chris Cloete took his try well but didn’t have his usual impact around the field.

I thought Stephen Fitzgerald looked pretty good. He got caught a little for Cardiff’s third try but I thought he looked tidy.

Most of these guys were dragged down by the curve of the overall performance.

Dave Kilcoyne, John Ryan, Gerbrandt Grobler and Darren O’Shea didn’t have terrible games by any means but they weren’t able to impact the game in a meaningful way. Grobler and O’Shea worked hard in defence, and all of the above were prominent in the heavy phases in the third quarter rally but didn’t really get going outside that.

Rhys Marshall had a poor game by his standards. He made a few bad reads in defence and didn’t get his usual value on the ball in attack. I’m reluctant to criticise his kick protection for the charge down, as he kept at it after halftime. His scrummaging was missed when he went off.

Mike Sherry didn’t have a very effective cameo off the bench. The scrum seemed to deteriorate fairly dramatically after his introduction and he looked a little off the pace, which is to be expected in fairness.

I thought Rory Scannell and Sam Arnold were game but didn’t get enough time on the ball given our possession in the second half especially. Both had a few good moments but I thought the game kind of passed them by.

The same could be said of Simon Zebo, Ronan O’Mahony and Darren Sweetnam. They didn’t get the ball in their hands in dangerous areas and couldn’t get their chase going in any real way.

Ian Keatley had his worst performance with a while, which is a pity as he came into this game on the back of a great impact against Zebre. He didn’t exit very well, made some poor tactical kicks, missed attempts at touch and snatched at two goal kicks. A bad night in a season of mostly good ones.

Duncan Williams had another poor outing here. How much of this was due to the instruction to kick? I don’t think it’s a role that suits him, but there were a few opportunities when I thought he could have picked a better option than what he went with. He had a lot of touches on the ball here but too few of them were of the quality we were looking for.

Too many errors on a bad night and he’s capable of much better.

I’ll be covering how and why this game went wrong for Munster in this game on TRK Premium this week. Get access for just €2 a month.