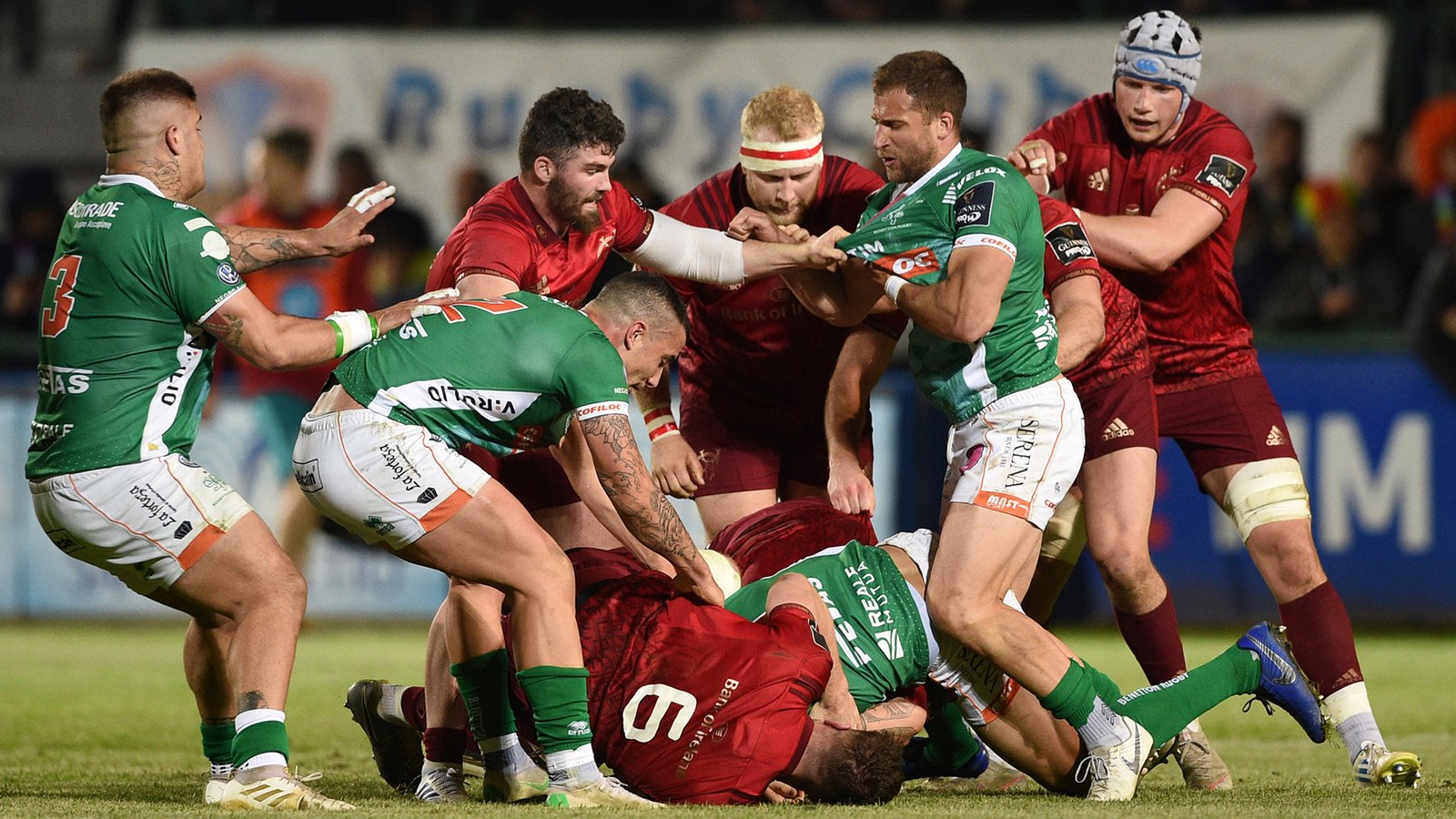 This was one of the results of the season from a Munster perspective.

Sure, we’ve beaten bigger and probably better teams over the course of this season – Exeter, Leinster, Gloucester, for example – but few games can match the performance of this particular Munster XXIII in this particular game.

Johann Van Graan made eleven changes pre-game from the team that won against Cardiff last week. There were three academy lads in the matchday squad, two in the starting XV and maybe one or two guys that might be guaranteed a start next week against Saracens. We were away from home in a place that has become a Real Tough Place To Go over the last two seasons. We were all set up for a classic Tough Night At The Office against a Benetton side that (a) needed a win to secure a playoff spot and (b) were just a short week removed from pushing Leinster to the pin of their collar in the RDS.

This was a game that would be very easy to lose.

For a while, it looked like that could well happen. Benetton are no joke – at all – and they started this game with exactly the type of tempo and width that Munster would have expected. With 10 minutes on the clock, Benetton were great value for a 10-0 lead earned through the boot of Tommaso Allan and a try from Tommaso Benvenuti. This time last year, I think a Munster selection similar to this one probably loses this game from that point in the first half. Not this one, though.

There’s a calmness running through this squad that wasn’t there this time last year. Benetton were all over us in the opening 10 minutes and feeding of our little micro-errors with all the verve and pace that have been the hallmarks of their play this season.

It’s a decent exit box kick from Mathewson and Sweetnam gets a good chase on it but when the ball slips through the arms and starts bouncing, dangerous transition events can occur. Allan found Tavuyara in a bit of space and the rest played to the kind of script you’d expect when the big Fijian gets the ball in that position. Remember, in 2016 Tavuyara was second behind All Black winger Rieko Ioane for try assists in the Mitre 10 Cup and it’s moments like this that show you why.

It wasn’t a great opening 10 minutes but we were soon back in contention.

A handy kick offside penalty awarded against Ioane off the restart gave us our first look at the Benetton 22. After the start we had endured, we needed to be clinical with that close range opportunity and we were – look at this excellently designed lineout.

Munster feinted a maul build which pinched in the Benetton forward defenders before twisting infield. Holland and Loughman were the key guys here; after O’Donoghue’s angled presentation to Holland, Loughman’s narrow run around the corner of the maul ties in Halafihi and makes the space for Holland to swivel the ball to Coombes, who powers into the Benetton backs as he arcs around the corner. That gets Munster to the try line, where Marshall could finish on the next phase.

We were back in it. A try off a scramble a few minutes later put us clear, and the game would seesaw back and forth until Benetton took a decisive lead thanks to two tries just before and after halftime. The latter try – a penalty try with a yellow card for Darren Sweetnam – put the game at 28-17 with 50 minutes on the clock. With 14 men on the pitch and an 11 point deficit away from home this was – once again – a very easy game to lose.

Yet somehow, that isn’t what happened.

Losing Sweetnam seemed to focus things from a Munster POV and we started to hurt Benetton by attacking the gaps between their forwards and backs on phase play.

To set Benetton up for this, we had to pin their forwards in place and force them to make a folding decision on the following phase. Look at how Arnold holds Steyn at the edge of the forward line before popping the ball back inside to draw the inside shoulder defenders to the ruck point.

That earns Munster an alignment we could attack. Look at the Benetton forwards around this ruck. 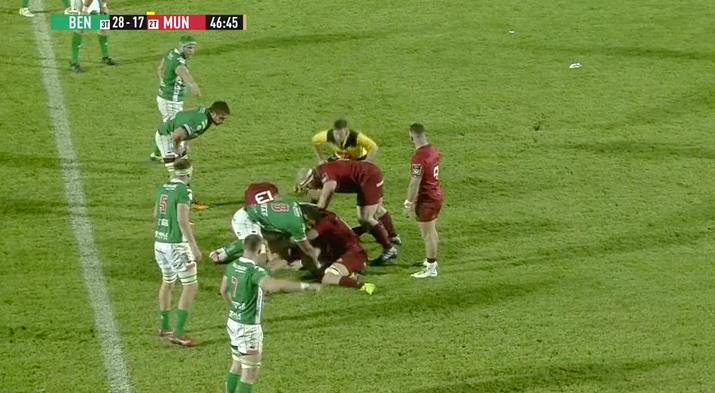 There’s six of them on their feet, with four trapped on the openside of the ruck and two involved in the ruck itself. Munster targeted this area to get this alignment. If you carried straight into Steyn, he’d make the tackle but it would be closer to the touchline and, as a result, easier for Benetton to align their defence. When we went for the position inside Steyn’s shoulder we pinned him to the flank and got Ruzza and Halafihi to come around to the area of the field we weren’t attacking.

All Mathewson has to do now is get the ball beyond Bigi. 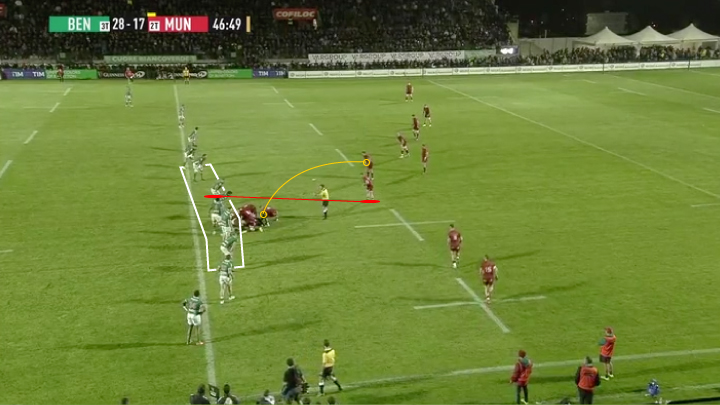 Bigi is held in place by Cloete, so when Mathewson gets this ball to Marshall, Munster have space to attack at the edge of Benetton’s forwards. 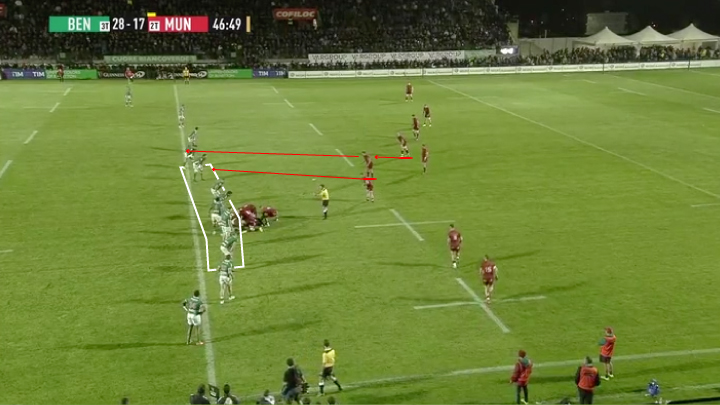 All we’d need to do now is find a way to exploit it.

Marshall takes the ball, runs an angled line at Benetton #1 and #4 who are defending the edge of the forward line and sends Wycherley away through the space between Green #1 and the Benetton backline.

There was no need to start driving the ball into the corner off these penalties. We might have done that last season. Instead, we chipped away at the 11 points lead to the stage where we were five points back with a man advantage for 7 minutes.

We started chasing kicks better, getting a few bounces on transition and, once again, we hit Benetton between the forward and backline, which was incrementally easier now that they were defending a man down in the backs.

Look at how narrow the Benetton forward line is here; 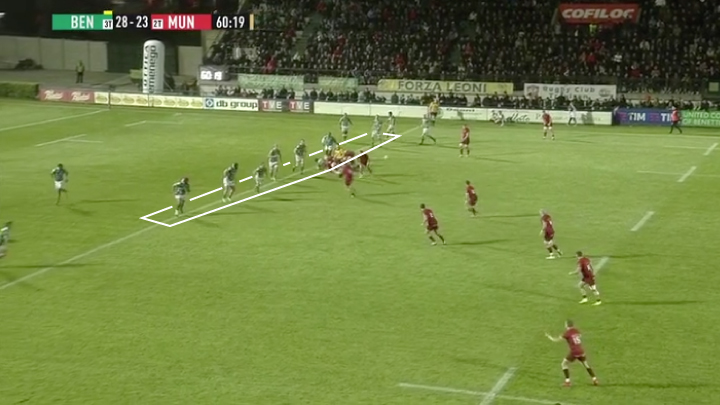 That means the forward edge defender – the replacement hooker Faiva – has an awful lot of ground to cover as this play develops. 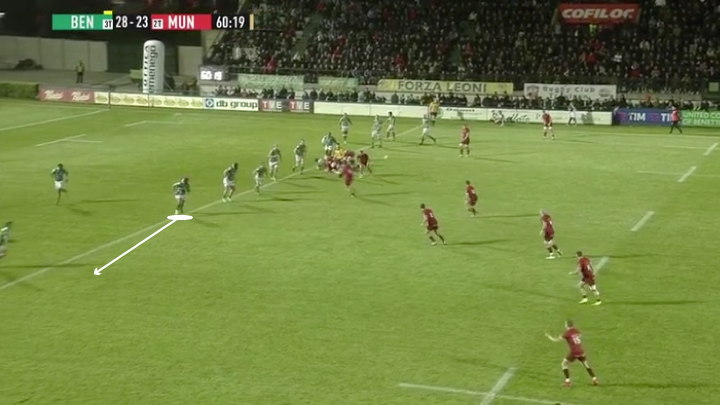 Who does Goggin scorch past right before his excellent offload to Daly? Have a look.

As the game developed and Benetton fell off that small little percentage, Munster struck right where it would hurt the most.

Do I need to show you where Hanrahan made the linebreak for Mathewson’s bonus point try?

Last forward defender sliced up in space, right between the seams of forwards and backs. Hanrahan had been probing there all evening to great effect and his work here – along with Mathewson’s support line – was outstanding. We got this position off a kick transition, but we were looking for this kind of opportunity all evening. Munster had the patience and intelligence to stick to the plan and wait for the slightest dropoff that we needed to execute.

… and you’ve Munster’s way back into this game and a rough guide to how we came away with a bonus point win. Patience, skill set, structure, clinicality.

This win was a fantastic reflection of the squad depth as we head into the business end of the season. Playing Benetton away from home as they chase a playoff spot with a fully loaded side is a tough proposition these days but Munster managed it. You’d say something if Benetton completely blew this game but they didn’t; they started incredibly well for the most part and head into the last quarter with a lead they would have backed themselves to see home against most opponents. It’s a credit to our coaching staff and squad that we managed to turn them over on their own patch, and with a bonus point win on top of it all.

The Wally Ratings: Benetton (A)

This was an excellent squad performance.

I thought the two Academy starters – Gavin Coombes and Shane Daly – had very effective performances in different ways. Daly’s work off the ball and defensive scragging were quite good and his finish for Munster’s third try looked like a “tap in” but was anything but. Gavin Coombes had a really good day carrying the ball and had a crucial part in the first try. He’ll be disappointed with one loose ball at the back of the scrum but he showed up very well for a 21-year-old still growing into the professional game against a big Benetton back row.

There’s an awful lot to come from Coombes, especially as we head into a RWC disrupted season.

Fineen Wycherley came awfully close to a five-star performance. He was everywhere and had a number of important involvements, which is really impressive for a lad only turned 21 since December. One of the breakout performers of the season.

Rhys Marshall had an astonishingly good 60 minutes here. His lineout and scrummaging were top drawer – the basics – but it was his work in the loose that set him apart for me. Scoring a try is great, sure, but it was his passing, lines of running and offloading that impressed me.

Whenever you saw Munster doing something good in this game, Rhys Marshall was in the vicinity. He almost played like another midfielder at times, such was the effectiveness of his passing and positioning. Rugby Rhys. ★★★★★

Billy Holland is as good a second row as there is in this league. If your initial reaction here is to go “hang on, that can’t be right” just look at his body of work over the last four seasons. Holland is incredibly durable, has outstanding lineout IQ and execution, is an excellent referee manager and has a skill set with the ball in hand that has improved year on year to the stage that he’s often one of our top passers when he starts.

He had 8 passes here – more than any other player bar our halfbacks – and was showing up with big involvements in most of our big moments. He also slowly gobbled up the Benetton lineout and got a crucial steal over Ruzza in the second half.

The best thing you can say about Billy Holland is that he’s an example for every single young lock playing in Ireland today to aspire to when it comes to his work rate, character, skill set, IQ and determination to improve. ★★★★★

I’ve been a critic of JJ Hanrahan this season but I’ll caveat it like this – if Hanrahan played like he did here every week, he’d be pushing for inclusion in Ireland matchday squads.

He was bordering on unplayable at times, here. Hanrahan attacked the Benetton forward seam with accuracy and pace while keeping their backfield moving with a variety of excellent kicks.

This was probably as good as I’ve seen Hanrahan play in a few seasons with sharp passing, accurate kicking, clinical goal kicking and electric pace when attacking from first receiver being the highlights against tough opposition. A matchwinning performance. ★★★★★