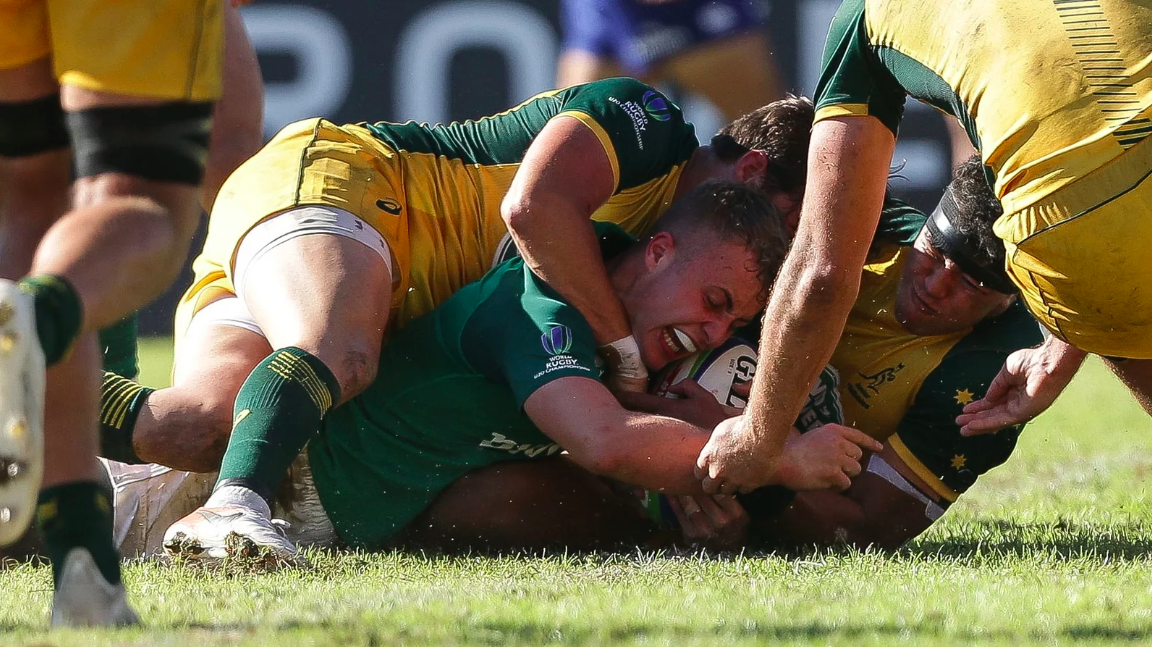 This Irish side is as tough as nails.

It isn’t in the loss of this game, because lose they very much did, but in the manner of the shift they put in while losing. This isn’t about moral victories – even if these guys are too young to be labelled with that particular backhanded compliment – it’s about showing your metal in adversity. Losing one of your key forwards, and a tight five at that, for nearly sixty minutes is about as adverse as it gets at any level of rugby, let alone this one. These kids don’t know how to quit, don’t know how to stop fighting.

They have the kind of spirit that, if you could bottle it, you’d sell by the crate.

Ryan Baird’s dismissal on twenty minutes changed the tone of this game.

Let’s be clear, it was a deserved red card.

There isn’t quite enough of a dip to warrant any mitigation and, in fairness to Baird, he realises what he’s done immediately. It would change the game decisively in Australia’s favour but, like a ship holed beneath the water line, the damage done to Ireland wasn’t immediately apparent.

Australia stretched their lead out to 10-0 a few minutes after Baird’s red card with what would prove to be a familiar sight; Ireland down numbers on the wide openside and Australia taking advantage.

This is exactly the type of try you concede when you’re missing a big centrefield defender like Baird. I think you can get away with losing a back three for the full game, in that you’ll be more vulnerable to certain types of plays but your primary defensive machinery will still be in place.

When you lose a big hitting A/B/C defender like Ryan Baird, your defensive line naturally shortens which makes decisions on the defensive edge all the more high risk. Turner tried to cut off the pullback pass with his blitz but we couldn’t stop the ball on the inside and Australia got away for a multi-man isolation in the backfield. A team as good as this group of Junior Wallabies puts away those chances.

Ireland could have deflated slowly in the aftermath of this but instead they bossed the ball for much of the next 40 minutes while working with a seven-man scrum and while down one of their primary heavy ball carriers.

Much of Ireland’s best work was based on pace, width and intelligent running lines. This sequence off a set piece is a good example.

An excellent carry from Hodnett – look at that footwork – sets up Casey to hit a wide flat pass to Flannery on the outside of a three-man pod, who stands up the Australian wide defence before offloading to put Turner away down the flanks for a big gain.

Ireland were good at this against England and it worked here too.

We pressed and pressed from this position – even managing a scrum free kick – and will probably feel slightly aggrieved that Australia’s persistent infringement inside the 22 wasn’t punished more harshly by the referee. Ireland eventually scrambled over through a Casey quick tap off another scrum freekick and improbably enough, the 14 men were back in it.

The second half saw Ireland continue their possession pressure with some smart defence and excellent transition attacking.

We clawed our way back to 10-10 and then, improbably, took the lead with a superbly taken strike play off a scrum on halfway.

Ireland got Moore into a position where he had a lot of options and he took every opportunity that came his way on this play excellently.

From there, Ireland started to run out of steam. It happens at this level a lot but especially so when you’ve been holding onto the ball a lot with 14 players and defending scrum/maul down a tight five forward.

I’ve seen some critique of Ireland’s defensive fallout in the last 15 minutes but you can’t underestimate how tiring defending without a guy like Baird is, both in open play, in the scrum and maul. And u20s are generally more attack dominant than the full senior game.

Here, for example. Wren is defending the backfield going on where Australia are positioned – in their own half. When the ball bounces to the edge, Wren has to scramble up and in with some high impact decisions to make.

This is the key moment, for me. 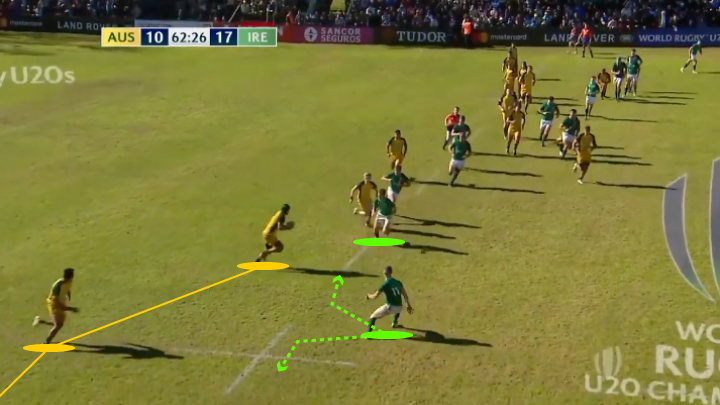 Once the ball gets to here, Wren – after shooting up from the backfield – has a decision to make in half a second. Go to stop the carrier, or stay out on the two overlapping Australian players.

Wren is looking at the gap between Turner and himself and making a split second calculation – is this forward running or passing and if he runs, can Turner get there? If the ball carrier runs, stepping in is the right call. If he passes, you get exposed. 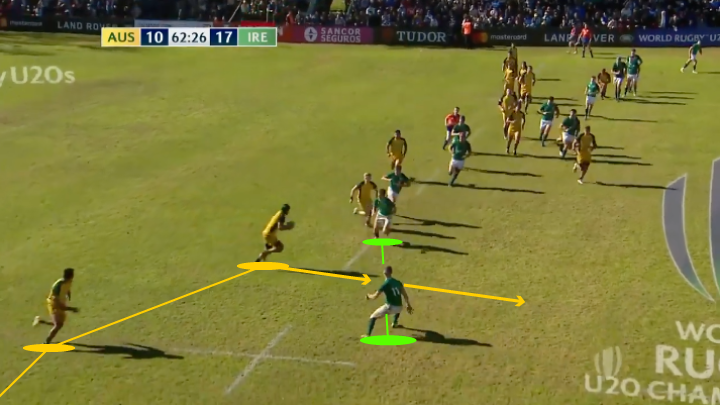 Add in another defender to the primary line – especially an A/B/C defender like Baird – and you have a different situation entirely. Ireland’s line would be longer, so there would likely be less big decisions to make on the edge and we might have held out the Australian’s for a little longer and bring some time pressure into the game.

Instead, the wound we took on in the 20th minute came back to hurt us. We conceded three tries in four minutes and that was that, pretty much. Ireland went looking for a score to try to get us back inside bonus point range but we couldn’t find it. Australia added a sixth try before fulltime and that was that.

But the smart, high tempo rugby that Ireland played for 40 minutes with 14 men will really stand to this group of players. The four-minute collapse at the start of the fourth quarter will be a real killer for Ireland on the watch back but there was a lot to admire about this performance, which didn’t really reflect on the scoreboard at the end.

They’ve got guts, they’ve got smarts, and they’ve got attitude – now they have to get it done against Italy to have a chance of progressing to the real business end of the tournament.