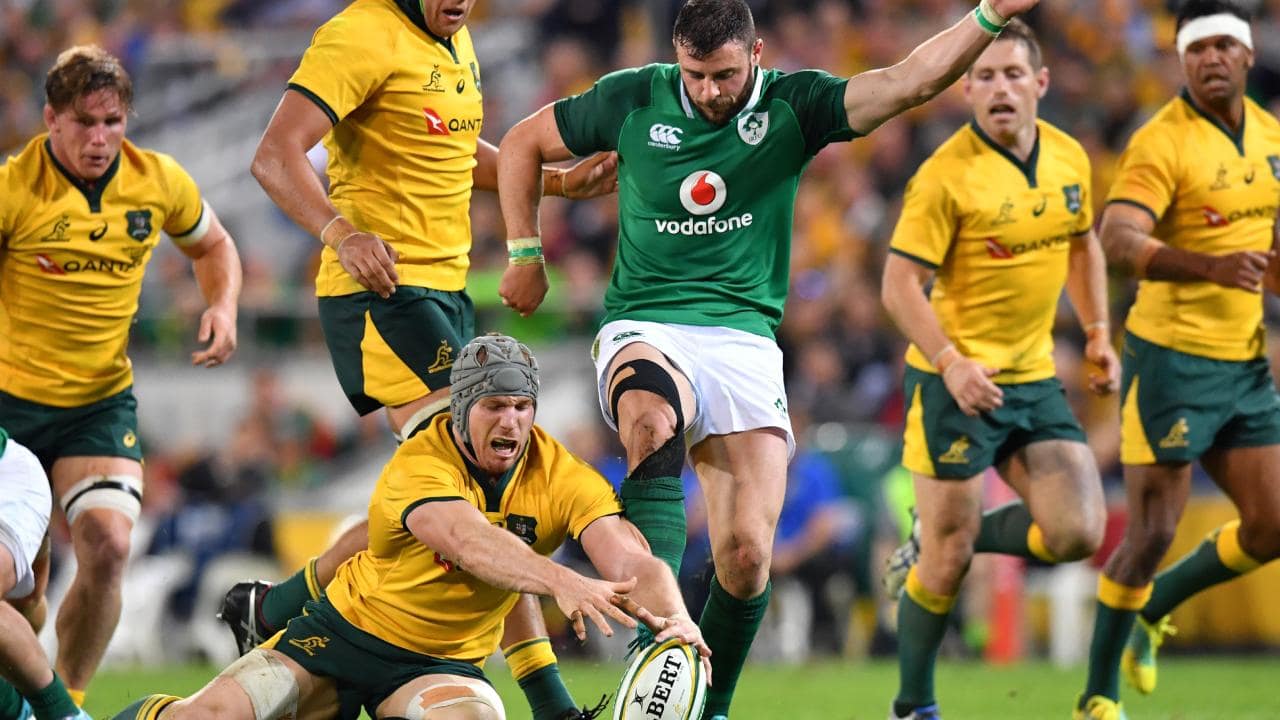 And just like that, the streak ended, as all streaks eventually must.

Ireland’s 12-game unbeaten run came to an end in a sometimes thrilling, always enthralling contest against an aggressive, committed Wallaby side that belied their recent up and down form with a high octane performance in Brisbane.

Ireland were far from vastly outperformed in this defeat – Joe Schmidt correctly described the margins between the two sides as “skinny enough” – but that isn’t to say that there weren’t a few unfamiliar elements to the Irish performance; gappy defensive alignments, weakness under the high ball and handling errors chief amongst them.

The initial exchanges were high paced and incredibly physical, with Australia making a few good statement hits in the early going. You could see the video work in much of what the Wallabies were doing as they looked to read Ireland’s movements close to the ruck.

Some of it was high risk, high reward like the above but when you get that reward there are few in-game boosts like it. Ireland were making good ground despite the physical pressure being brought by the Wallabies but too often the final phase, final pass or wasn’t there. Ireland seemed to be operating on a slightly lower fidelity on the moving parts that elevate our attacking structure than normal.

The easy answer to that lack of fidelity is the Carbery factor but, like all easy answers, it doesn’t tell you close to the full story. The soon-to-be Munster fly-half played quite well for his 56 minutes – one bad penalty miss aside – but he, and Sexton, both suffered from slightly sub-optimal ruck speed against a stacked Australian defence that was using their double-openside back row alignment to great effect on Ireland’s possession.

Australia were switching between 13/2 and 12/3 in their defensive alignments with excellent timing and, aided by the extra half-second Pocock and Hooper delivered on the floor, that prevented Ireland from getting that outside shoulder angle. With Genia sweeping close behind the line and Folau tracking wide and deep, Ireland found it a little claustrophobic at times. We did try to run through a few other gimmicks to generate the separation we needed but the end product was always a hair’s breadth away.

I think Ireland left their narrow carrying patterns a little too soon on a lot of occasions (which brought Hooper and Pocock into play) and really missed the elusiveness and pace of Garry Ringrose at outside centre in the absence of Earls.

Both fly-halves left a few opportunities to chip over the top of the flat Australian defensive line on the table and I’d expect to see that used a bit more this week. Carbery played flat to the gainline on most of Ireland’s possessions and when Sexton came on, Australia had the lions share of possession.

When Ireland began to use the heavy screen as a carrying device rather than a pullback decoy, they made good ground and probably could have scored this one with a bit more luck after the impact and a kinder question from the ref.

But clear try-scoring opportunities were hard to come by and the ones we did create were lacking the clinical edge that we didn’t see in the Six Nations and November Series just past. If it is to be remedied, it’ll be through an overall improvement in accuracy rather than gimmicky personnel changes for the sake of it.

I wrote pre-game about Ireland’s inherent advantage in the lineout and it played out more or less as I expected, with Australia using the “walk up” and O’Mahony using his speed into the air as a key defensive ploy on the Wallaby throw.

That lead to Australia throwing a lot of their ball into contestable areas and never really getting the kind of dominant lineout possession that they would have liked. Ireland’s throw was usually pretty comfortable with O’Mahony to the fore but our attacking maul wasn’t as effective as I expected pre-game. We did get some joy off the maul feint – one penalty earned straight in front of the posts – and I’d expect Ireland to use that element a fair bit more in Test 2.

The scrum was a different story, with Australia having parity at the very worst and concerning dominance at best, even with Leinster’s Heineken Cup-winning front row on towards the end of the game. The scrum penalty conceded against the head in the last quarter will rankle with Ireland, who’ll claim the Australian’s just walked around the corner, but there can be few complaints overall.

These are the type of games where you miss the scrummaging prowess of Rory Best and provide a big opportunity for Niall Scannell in the coming weeks.

This was a display marked by uncharacteristic Irish errors. Ireland turned over the ball 21 times in this game. As a comparison, that’s more turnovers in one game than we managed in our last two Six Nations games – England (7) Scotland (12). Some of that came down to defensive pressure but mostly it was scrappy knock-ons at the ruck, losing the ball in contact and more than a few kick throughs that fell short of the mark accuracy wise.

Australia, on the other hand, were regularly finding green grass and Wallaby hands with a plethora of kicks that put Ireland under significant pressure. Kurtley Beale kicked the ball 14 times in this game and very few of those kicks failed to hit the mark from a tactical perspective.

Defensively, I thought Ireland were alright in the main but a little vulnerable under the high ball and on angled kicks over the top. Throw in a few missed shoot-ups from Henshaw on big openside plays like this;

and you have got an Irish defensive performance that looks a lot worse than it actually was. Henshaw was certainly rusty on his first game back after injury but he did have a lot of work and decision making to make on the edge given the way we set up over the course of the 80.

We were surprisingly lax under the high ball at times too, which introduced compounding errors into a defensive system that usually doesn’t produce them.

This misread from Kearney lead directly to the first Australian try. Rob Kearney has his detractors but the kind of errors we saw from him in the last 10 minutes of the first half tend not to happen to Kearney all that often.

Throw in a few iffy refereeing calls that you tend to pick up playing test matches away from home and you’ve got an approximate picture of how this game played out as it did. The nine-point margin, in the end, was slightly flattering to the Wallabies but Ireland’s inaccuracies on both sides of the ball give a stark lesson as to what can happen at test level.

The Wally Ratings: Australia (a)

As per usual, players are rated based on their time on the pitch, if they were playing notably out of position, and on the overall curve of the team performance. Keiran Marmion and Jack Conan are not rated due to less than 15 minutes on the pitch.

James Ryan might not be undefeated as a pro-rugby player anymore, but not for the want of trying on behalf of the TWENTY-ONE YEAR OLD Blackrock man. I mean look at this.

Ryan was outstanding again, with a full court display of heavy ball carrying, lineout work and defensive brutality. This guy is special.

Peter O’Mahony was captain on the day and played like it. O’Mahony showed the full range of his skill set in this game. There was the usual aerial menace, scrappy carrying, wide pod passing, breakdown black artistry and… grubber kicks?

O’Mahony always manages to surprise. An excellent performance despite the loss.

I’ll be covering all the small details of this game on TRK Premium during the week. Get access for just €2 a month.