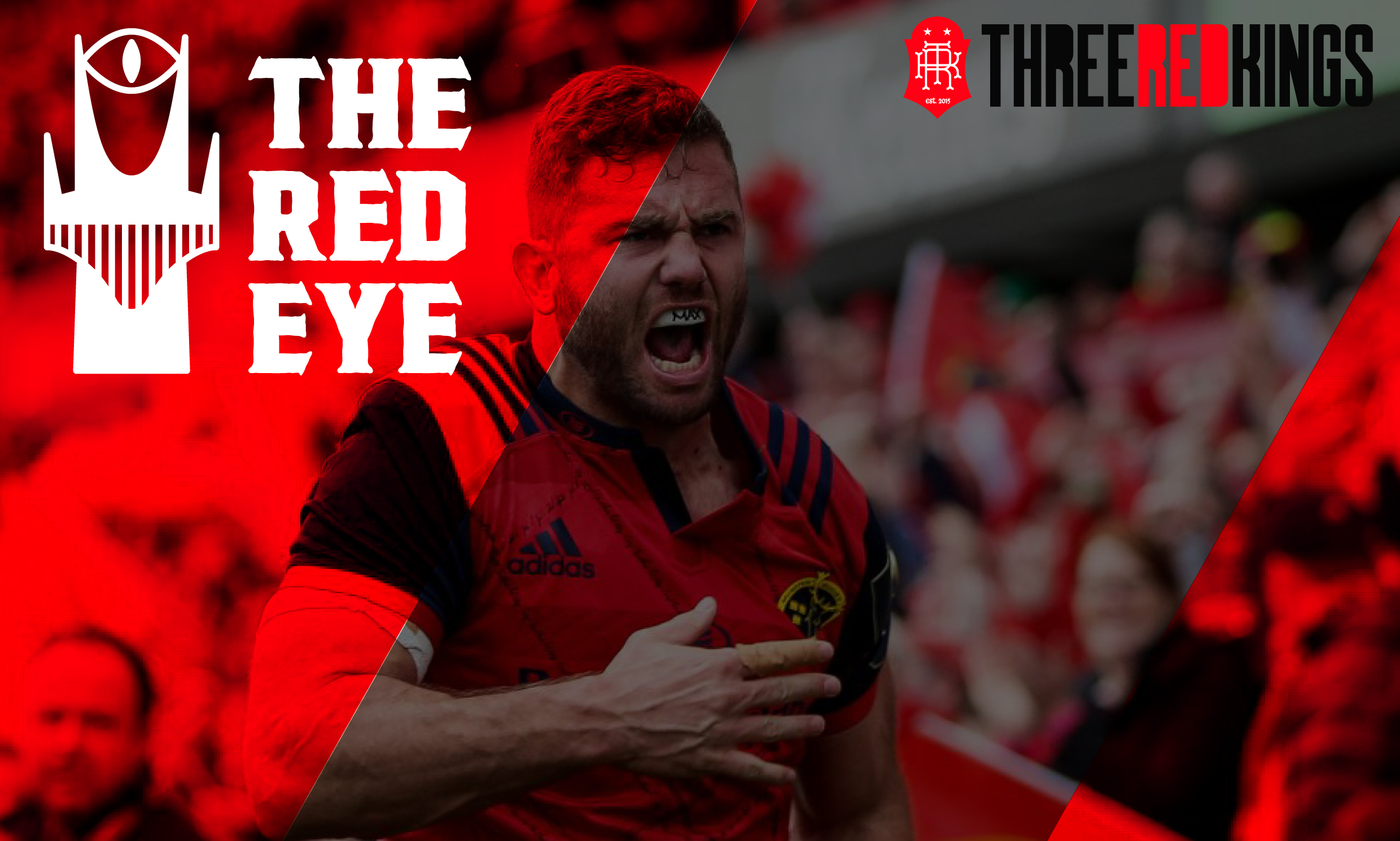 Playing Glasgow in Scotstoun is not a pleasant experience.

By design, of course, but the fact that it has become a Tough Place To Visit over the last five years is a real credit to the various head coaches and playing group of the Warriors and that’s before we even get to the fans, who’ve made Scotstoun a raucous, unpleasant venue to get a result in. You don’t have to like the Warriors for this – I don’t, personally – but you have to respect the team that they’ve become.

Last season, Munster arrived in Scotstoun at a similarly embryonic stage of the PRO14 and, to put it frankly, we left with our ass in a sling after a fairly comprehensive 37-10 defeat. It’s just over a year to the day since that game in Scotstoun and, while a lot has changed for both teams, if a defeat is on the cards for Munster tonight it’ll look very similar to the defeat last year when it comes to the specifics. Glasgow haven’t changed an awful lot about the way they play, but we defend quite differently to the early part of last season? How will we stack up this time?

I’ll get to that but first, here are the teams; 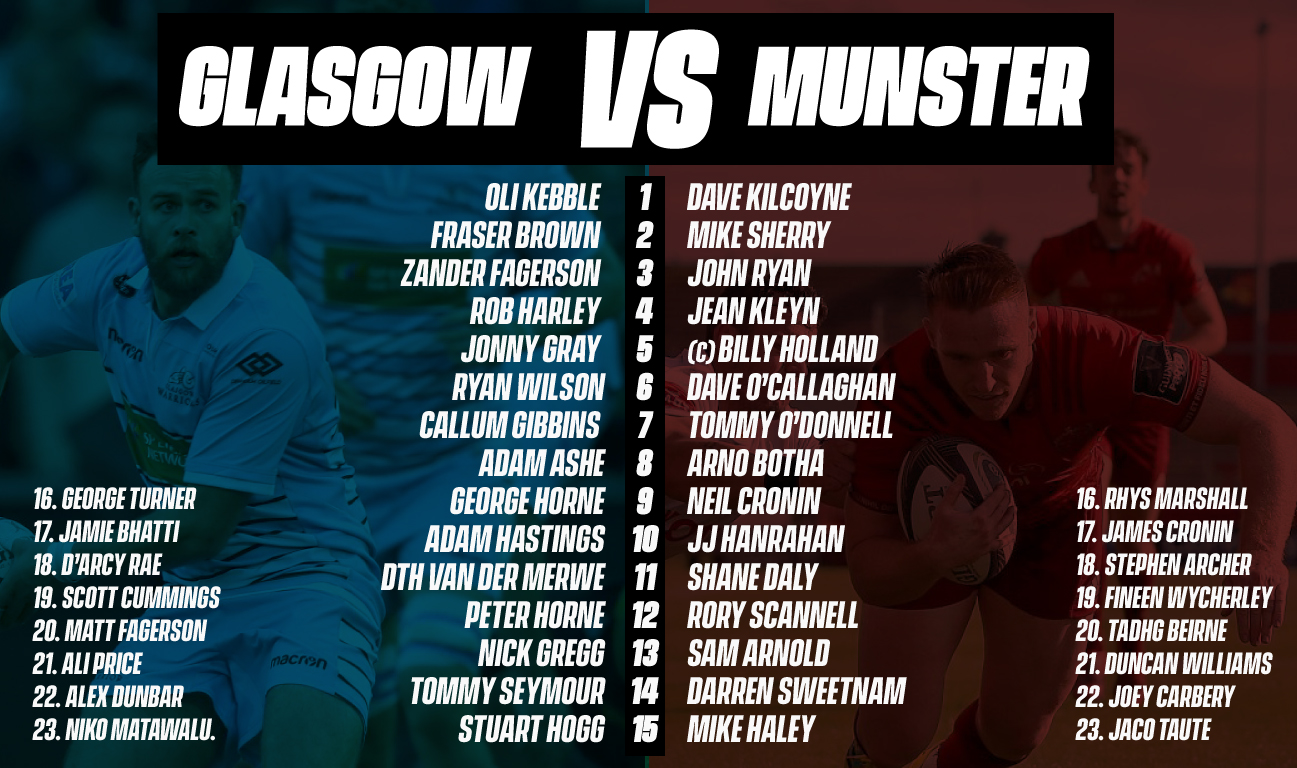 I’ll get into the team specifics in the Blood & Thunder Podcast.

When you play Glasgow, you take it that certain things hold true, at least for the last season or so.

If you know these two things, you can start working on the Warriors home and away. Last season, Munster were prepared for a physical onslaught and won it, for the most part, but it didn’t matter – the Warriors were happy to take a shallow gain line advantage in exchange for quick ball and a chance to attack the outside edge, which they did repeatedly and successfully.

Our defensive system at the time – Nienaber’s high and wide press with overlapping cover – played into the Warriors structures as it meant they could constantly cycle runners on multiple rucks until we ran out of numbers or folded badly coming around the corner. They used our system and selection weaknesses of that particular time against us and, in doing so, generated a tonne of angles to work with on the outside edge that they could go after with any kind of sustained phase possession.

The season before – 2016/2017 – Glasgow had tried to play through Munster but found themselves short rucked in all four games, physically overpowered and ultimately fell to four defeats in a row. At the end of that season, our system – while effective for the most part – had been very publically cracked in the PRO12 final and that gave teams a blueprint for how to attack Munster. It coincided with the exact brand of rugby that Dave Rennie likes to play and Glasgow blew us away by attacking our systemic weakness at the time; we were vulnerable to quick ball and poor folds if you could overload us in the middle of the pitch by attacking the C defender, moving the ball to the edge and attacking isolated defenders. If we couldn’t blitz, we would end up with poor numbers and that would expose us to getting super-loaded, just like Scarlets did the season before. 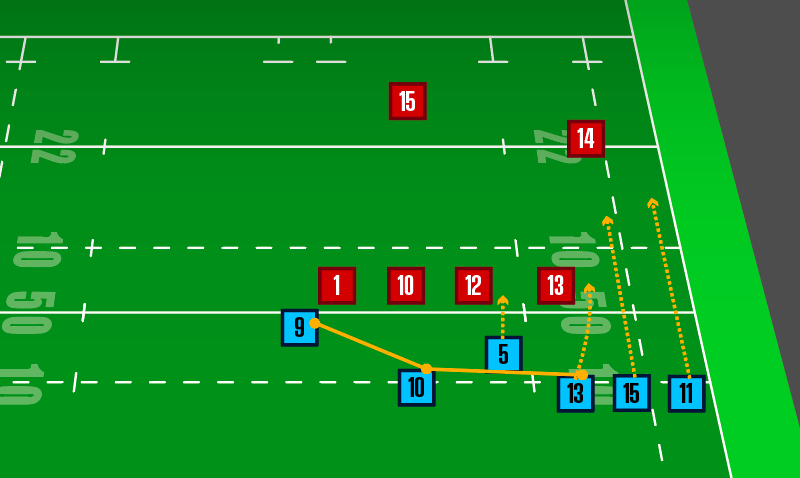 That allowed Glasgow to attack out midfielders and wide defenders with a simple stitch line from a forward and put a multi-man overlap away up the tramlines.

Glasgow still play a similar game. Their forwards performed well against Connacht last week, but a lot of the statement Glasgow forward moments came from iffy alignments around the fringes from the Westerners.

In the middle of the field, Glasgow like to use multiple screens to give multiple play options. 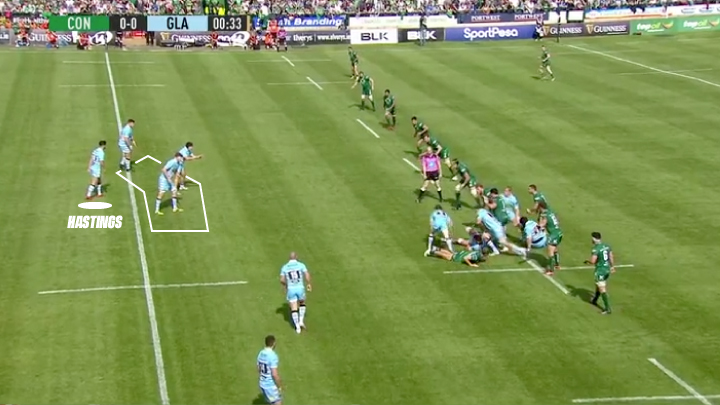 They’ll use traditional forward screens for Hasting, like the above, and he’ll send the ball quite wide to a second midfield pod of three with a finishing option outside. 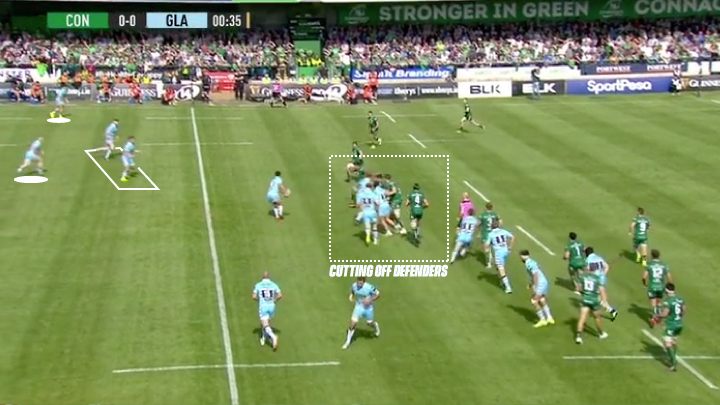 Glasgow use their initial three forward screen runners to disrupt Connacht’s shift across the pitch which serves to isolate their edge defenders, create one on ones and force Healy out of the backfield. 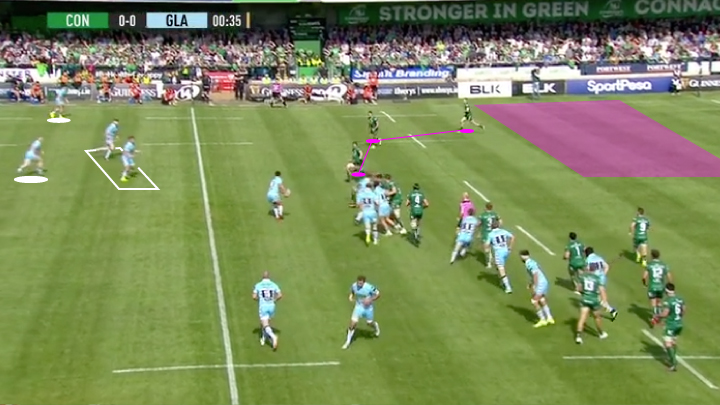 Glasgow don’t take the wide option on this play – they carried from the screen – but you can see how tighter work in the middle of the field could set the screen runner away around the corner with wing support on the touchline.

After a reset phase, Glasgow get back into the same shape, even if they won’t use the screen twice in a row on mirror sides of the pitch.

In this position, I’d like Munster to keep a little more compact than what Connacht have done on this set. Keeping a narrow blitz will force Glasgow to run wider on their phase constructions – we want this rather than trying to fan out where they can pick us off – and allow us to attack their wide rucks once we get a tackle in.

Connacht have a separation built into their blitz here – Bealham and Buckley aligned together with a space that’ll only get bigger as they move forward. 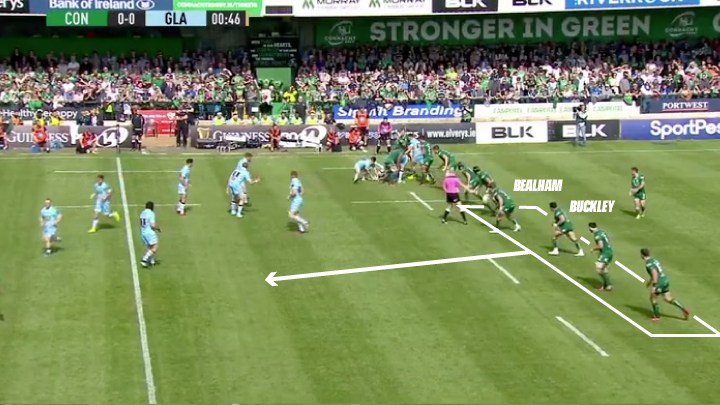 That will allow Glasgow to pick them off and move the ball around them but to do that, they’ll carry from the screen first to allow their wide pod to number up and generate outside width. 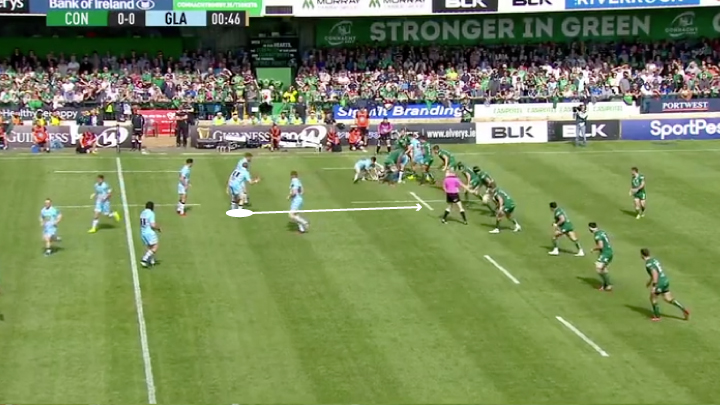 Once Gray carries and recycles – again, quick ball – Glasgow can strike across the pitch where they can get around the Connacht blitz and get that outside shoulder angle.

They stitch the ball across the pitch, draw out the Connacht blitz and then work the ball to the wide pod of three attacking the tram.

Let’s run it through.

It’s simple hands across the line once the ball comes back off Gray’s carry and it’s enough to draw O’Halloran out of the backfield to get attacked with a kick behind. When Hogg – a superb kicker of the ball – can catch you on the turn like he did here… 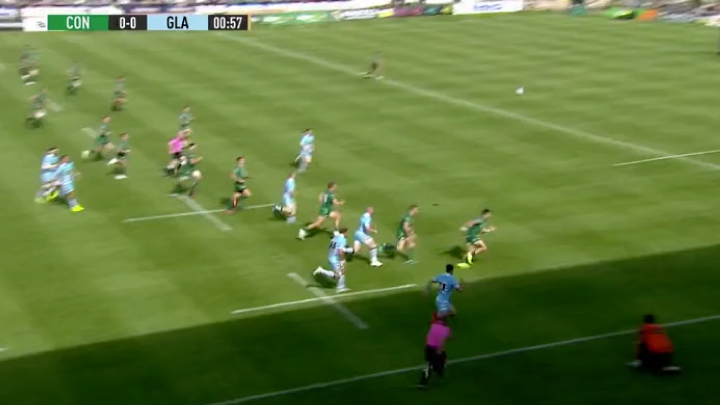 … you’re in a world of trouble trying to lock this up with Glasgow chasing you down in threes.

What I’d like to do here is slow down the quality of their phase play. Gray’s carry forced Connacht into a panicky reset because of the speed of the recycle and, like Leinster did, if you go after Glasgow at the breakdown you can take away their speed and, crucially, their numbers as you’ll force them off their feet to secure their supporting rucks.

Connacht’s movement up the pitch made the angle for Glasgow, given the depth of their second line of runners. The edge defender got isolated by the man inside him, and that left Glasgow dictate the angle. 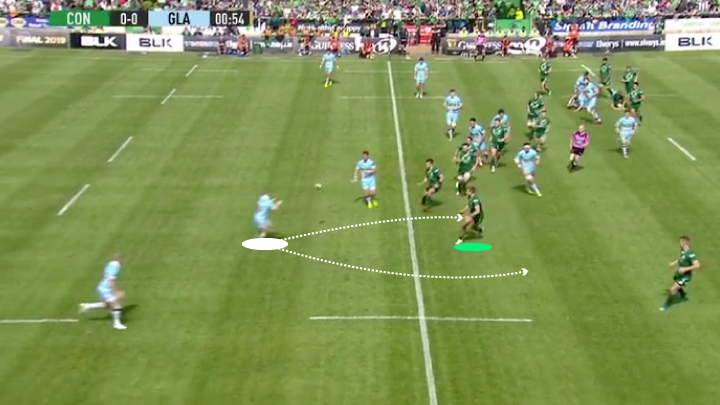 Grigg has multiple options – hit the inside shoulder, outside shoulder or pass to Hogg like he did. The edge defender has to hold his position and can’t hit out onto Hogg, which created the opportunity in the trams.

Munster need to deny Glasgow that isolation, force them to carry the ball so we can dictate the contact, and show them the outside. Why? With the outside to target, they’ll open themselves up to running into our compacted defensive line to vary the play – we know we can hurt them here – and if they have space to work with on the outside, we pressure their passing, make our defensive work simple – go to the space and make a tackle – and keep our positive defensive angles without getting caught isolated up the field. 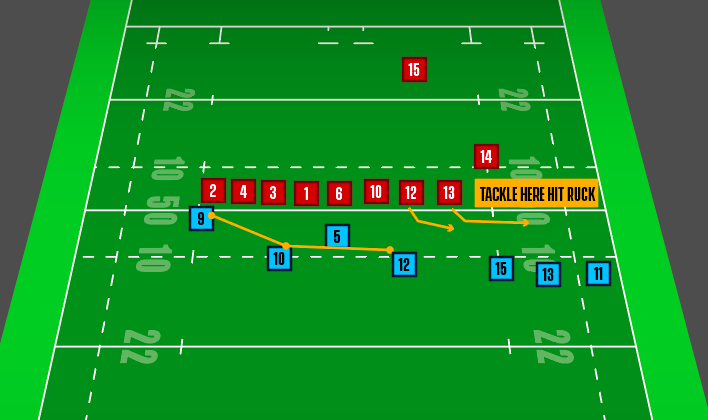 If we can tackle Glasgow in the wide areas, we can attack the ruck, force them to commit numbers and make each successive phase easier. If you allow yourself to get sat down and isolated on the edge, they’ll do this;

So don’t allow yourself to slow down in midfield like Connacht did here with Green #5 as that allowed Hastings a free run around the corner to that wide Hogg/Grigg pod. Force them wide, tackle them there on a positive angle, attack the breakdown or use your work in the wide to force them to play narrow where heavy jackals like Botha, Beirne, Cronin and O’Donnell can get to work over the ball.

Glasgow don’t want this game to turn into a forward-on-forward battle because they tend to lose those. Munster have to show them what they want – the edge – hurt them when they go for it, and force them to reset until they kick the ball away or turn it over.

Glasgow have a pretty decent defensive system, but they are weak at 10 and 12, and are very prone to giving up transitions on box kick resets where a combination of kick depth and defensive alignment constantly crops up for them.

Glasgow are a little vulnerable off infield drive mauls, as they tend to overload one side and expose themselves to getting isolated off the break. Look for Cronin to hold and fix Hastings/Horne for Botha or Arnold to smash off the break if Munster can draw Glasgow’s cover forwards into the maul.

The Scots also have a tendency to have a mini A/B/C blitz on phase defence;

This part of their defence constantly looks like offside – and sometimes is – but they creep up at A/B/C to ensure they dictate the momentum of the collision. Against Leinster last season, Glasgow couldn’t live with the heavy rotation of forwards and this looks like a gimmick to help them win those collisions this time around or a furtherance of the same system from last year. It gives Cronin, Hanrahan, Sweetnam and Carbery the same opportunities as we had against the Cheetahs last week, so look for more narrow tip ons and pullbacks to attack Glasgow here.

The Scannell-to-Sweetnam flat skip pass on a short side ruck is perfect for attacking slight weakness Glasgow’s weakness on the edge.

Glasgow like to make sure they number up heavily on centre field rucks to avoid getting dragged through multiple heavy phases forward on forward, so you can get good value from hitting them twice in midfield through a forward pod with built-in cleaners, and them attacking the side that has a lock defending at C.

This will be an incredibly tough test for Munster, but by forcing Glasgow to play the game they don’t want to play will be a start to getting the result they want here.