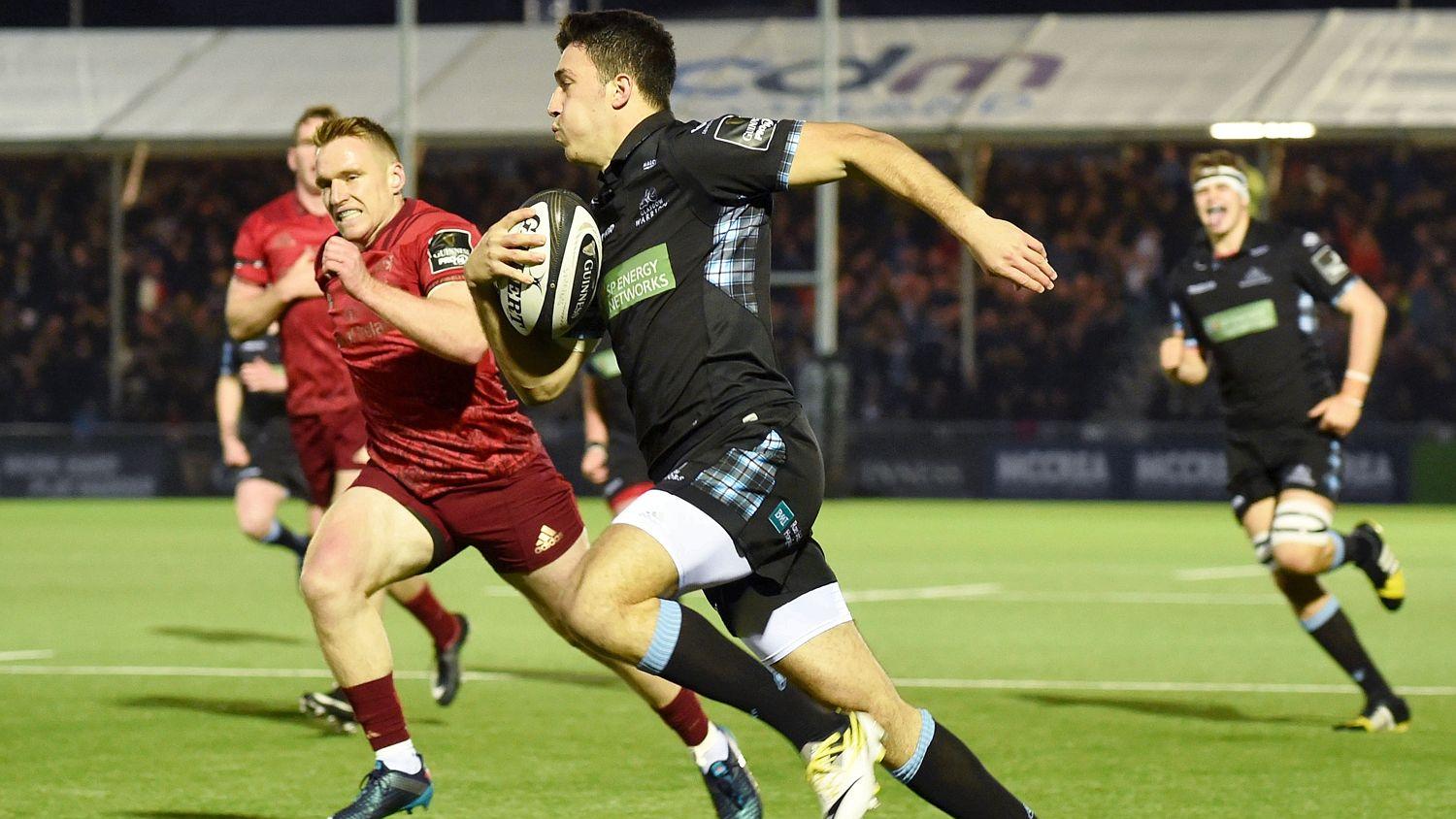 The GIF Room :: The Shallow Conundrum

When you lose a game in the manner that Munster lost to Glasgow on Friday, it’s natural for people to wonder how it happened. Some people turn to familiar scapegoats – like Duncan Williams, for example – but I think some would blame him if they slipped in the shower. We have to look beyond this comment section/angry forum user tier analysis and get to the nub of the problem as they presented themselves on the pitch. Let’s get to it.

Mind of the Opponent

When I’m trying to assess how a side will look to attack Munster in any given match, I try to assess how likely they are to attack us where we’re both strongest and systemically weakest – our own defensive linespeed. Of course, you also have to assess how capable a side is of performing this difficult attacking gameplan when you’re trying to track how a game might go, but let’s just assume a side with the attacking patterns of Glasgow coached by Gregor Townsend and now Dave Rennie will be capable of doing just that.

You have to ask yourself – how would I attack Munster in phase play if I was coaching against them?

Obviously you’ll need to have your basics right; your aggression, rucking and handling is vitally important. From there, I’d look to use Munster’s linespeed and tendency to keep numbers up in defence against us. That means quick rucks with a premium on getting any kind of centre field ruck that I can stack runners off either side; that’s how Scarlets killed us the Pro12 final last May and it’s how Glasgow did a number on us last Friday night.

When it comes to fringe defence, Munster have as good as there is in the club game right now. Unless you’re a team with multiple elite heavy carriers, the route to attacking Munster lies in hitting the line two or three channels out from the ruck and springing quick ball off that ruck to get around Munster’s cover.

Essentially, if you can cycle through rucks quickly enough, get away with cleaning well beyond the ball and gamble on a superload of players either side of a centre field ruck, you’ve got a big shot of scoring tries against this Munster defence. Let’s have a look at Munster’s set up on Friday.

Early on, Glasgow probed around the fringes but found little in the way of joy on their tight carrying. Look at this example early on;

No gain line. In fact, the ball is stopped dead but here’s the thing; Glasgow set up in such a way that it didn’t matter that they didn’t make ground off carries like these. All that was important was for them to get quick ball. Munster’s defence is quite complex but if I was to distil it down to the basics, I would say it’s based on making a powerful defensive hit, trying to slow down the ball carrier in the tackle and then fanning out from the ruck to make sure you stay numbers up. Munster tend not to get hands on in the ruck – jackaling, in other words – as a general rule unless they’ve got a really good look at it.

This means that Glasgow could narrow our defence with fringe carries even when you lose ground in some instances, spring the ball into “C” and then reload runners quicker than our defence can reset.

This is the kind of ball you want;

It’s a risky game plan but if you catch Munster on a right day when our handling and carrying is quite poor – like, for example, last Friday or last May in the final – you’ve a chance to really punish our defensive strategy on turnovers and on phase play.

Glasgow’s first try was a good example of this, specifically off turnover ball. Let’s have a look at the ruck progression for this try; After we turn the ball over in midfield, Glasgow immediately surge down the far touchline until Munster finally get a tackle in.

When they get the turnover, they have the mentality and numbers to go wide decisively. From there, they lose ground on each carry but it doesn’t matter – they want a relatively quick centre field ruck and they get it on phase 3.

They’ve reset their numbers to the openside and let the ball go once they get any kind of numerical advantage.

Let’s look at the set up here; Straight away, Glasgow can see that we’re slightly numbers down here. There’s a big gap between Bleyendaal and Scannell. You might think that’s not a problem because Glasgow are heading wide anyway but it is. That gap means that Bleyendaal will have to shuffle across with the real threat of being caught on his inside shoulder. That means he can’t just commit to running into the space because he’s having to defend too much space.

The play momentum is clearing heading to the openside here too which doesn’t reflect well on this pod of players over here; Ideally, I’d have wanted these guys to get around the corner on this ruck because we did quite a good job of slowing it down between ruck two and ruck three.

I count 8 seconds between when the ball leaves ruck two and when the scrumhalf goes for the ball at ruck three but we’re still numbers down. We’ve got six men defending a three man blindside when Glasgow’s body language is plainly going to the openside. For me, we need to get off the ground and around the corner a lot quicker than that but that’s what happens when you’ve got three guys tackling one player on the previous phase.

It goes to show a bit of the defensive stress that Glasgow’s wide mentality was causing; something widely familiar to Munster after the Scarlets game last May.

Munster did learn from that particular game, believe it or not, it’s just that personnel dictated we couldn’t implement the most optimal defensive plan in this game.

That defensive plan means deploying a specialist fetcher at or around the “C” position. You might recall this article from earlier in the summer, and this game is a good illustration of what I meant. We needed a fetcher in this game and, as a result, we had no reliable way to shift Glasgow’s mentality. O’Donnell’s game suits what we want from a blindside right now but he doesn’t have the breakdown speed, timing or strength over the ball that a specialist fetcher brings.

As I said earlier, Munster’s fringe tackling game is as good as there is in Europe but teams know that if they get quick ball at “C” – easier said than done, of course – they can spring our defensive system wide open. That’s where the likes of Cloete (coming in October) and Oliver (out for the foreseeable future) would have been hugely effective; lurking around the “C” position alongside the primary tackler to attack the breakdown, commit numbers to the ruck.

Nowhere was that more visible than on Glasgow’s second try scored almost directly from a restart.

This should have been an easy defend, but instead we play right into Glasgow’s hands by giving them an easy centre field ruck. His spacing from O’Donnell gives a route for Gibbins to attack down and that east-west metre gives Gibbins an easy north-south target to attack – something he does with relish. Gibbins takes out both O’Donoghue and O’Donnell on this carry and right away, Glasgow have broken our blitz.

Even here, a centre field ruck can be incredibly dangerous. So they attacked “C”, got quick ball and a centre field ruck to attack from. Trouble.

We have 8 defenders in the line; four on either side of the ruck. Glasgow have six men on the far side and one on the near. It’s a superload, and we haven’t spotted it. On the next ruck, Glasgow don’t get over the gainline but it doesn’t matter – our numbers have already been pinched on the wrong side of the ruck.

Again, I saw work rate issues on this phase.

What are all these guys doing between ruck one and two? Glasgow have superloaded again and have a four on two on the blindside tram. We have Marshall, Copeland, Farrell and O’Donnell guarding dead space when nine Glasgow players are either running to the blindside or standing there.

Again, I’d want them narrowing in here so our lads closer in could cycle around the ruck.

Let’s look at what happened;

Glasgow run a stacked blindside and then send a three pronged attack up the tram for a killer score.

Now look, if we turned any of those two rucks over, it was almost a certain Munster try but Glasgow rolled the dice and got the reward. Again, this comes back to our lack of a specialist fetcher to threaten Glasgow on plays like this. With a real breakdown threat like Cloete, Oliver or even O’Mahony, Glasgow would probably not have risked this play off the restart because it would be just too risky. Any kind of clean turnover here is almost certain Munster points but Glasgow felt they could risk it.

A fetcher hanging around “C” would have been over this ball in a flash; A fetcher would change the way teams have to set up against Munster in an attacking sense. With top level fringe defence and a constant breakdown threat at “C”, teams will forced to either commit a tonne of numbers to “C” rucks – which takes numbers away from any potential superloads AND slows down the ruck enough for us to reset – or play a no ruck, high risk wide-wide game that Munster’s linespeed can eat up all day long.

This isn’t meant to be a knock on O’Donnell by any means. He’s a classic 6.5 flanker with good line speed, good tackling and decent support running but he can’t become an elite fetcher over the course of a preseason. When you consider our backrow lineup in this game – O’Connor, O’Donoghue, O’Donnell and Copeland (with Wycherley filling in at 6 after O’Donoghue’s HIA) – we really didn’t have a threat to Glasgow’s rucks outside of counter-rucking, which we couldn’t do with any regularity.

A pity – but the recipe is there.