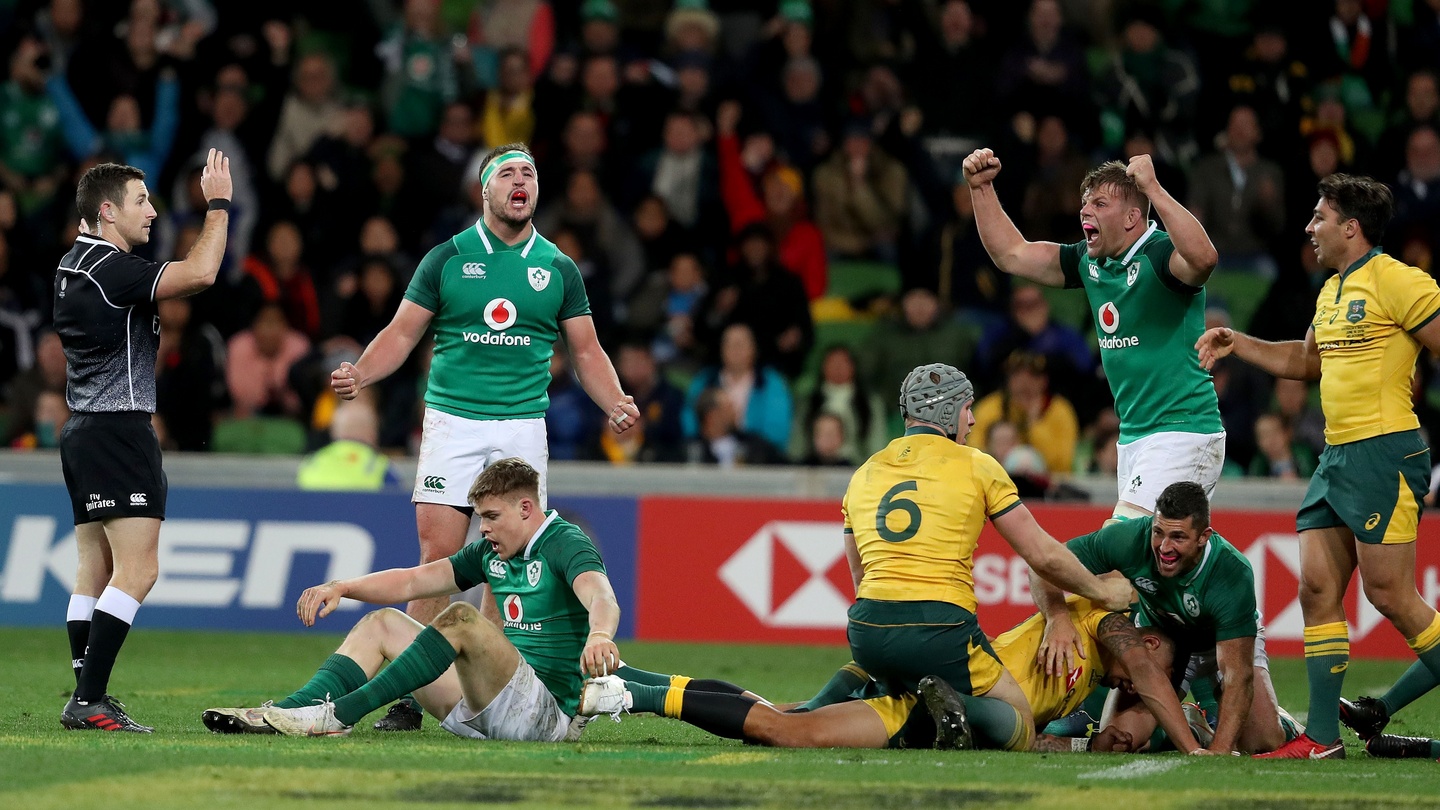 Ireland’s win over Australia in Saturday’s second test was built on an impressive, endlessly physical performance at the breakdown.

In the first test, Australia managed to make a big impression on the speed of the Irish recycle. One look at Ireland’s breakdown in this game can give you a fairly clear understanding of what Ireland’s focus was during the week – speed up that recycle.

The reshuffle of our ball carrying resources helped as expected but the increase in the tempo, accuracy and flat-out aggression at the ruck was just as important. Ireland had 125 successful rucks out of 131 – a return of 95.4% ruck completion. The six ones that went astray were two turnovers, one adjudged knock on, two penalties for sealing off and one for a neck roll. That number isn’t massively different from last week – 122 rucks out of 130 (93.8%) – but I’ll illustrate why that is later. Australia, to compare had a return of 72 successful rucks from 78 (92.3%) which is almost identical to the first test – 76 from 81 (92.3%).

To get to the bottom of these numbers, we have to look at why Ireland were so much more effective this week compared to last week with an almost identical amount of rucks – 125 v 122.

First, we need to go back to the principle of a heavy carrying umbrella that I described last week.

In test one, we didn’t have sufficient personnel to worry Australia and, not only that, our own gameplan put a little too much emphasis on width. Essentially, Australia didn’t respect our power in the carry and, to an extent, neither did we. That meant a lot of pullbacks, a lot of relatively easy reads for Australia in defence and, not only that, more than a few occasions for them to drop statement hits on us behind the gain line.

Look at this heavy screen set up from the Wally Ratings; 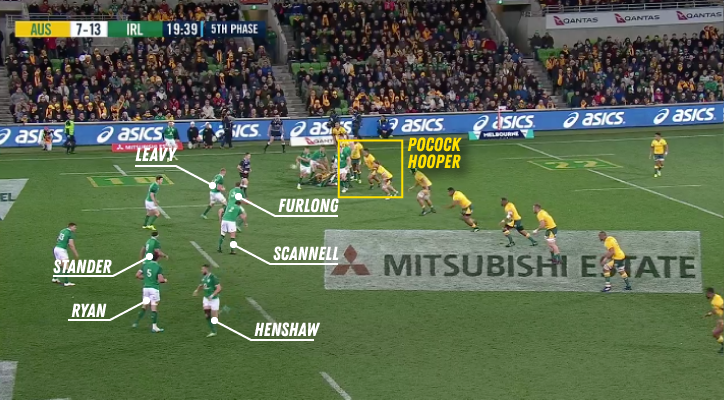 Ireland have six legitimate carrying options aligned in the middle of the pitch with heavy ruck support already in place. Not only do Australia have to worry about any one of Leavy, Furlong or Scannell (who had a mighty game carrying the ball) trucking this up, they also have to be wary of the threat of Leavy or Furlong pulling this back to Sexton, who then has Stander, Ryan and Henshaw to work with, as well as Ringrose sliding around the corner. And that’s without Pocock and Hooper, who’ve been dragged close to the blindside ruck with one of them at the bottom of a pile of Irish players – exactly where we wanted them pre-game.

We have two phases built in place before the ball ever leaves Conor Murray’s hands. 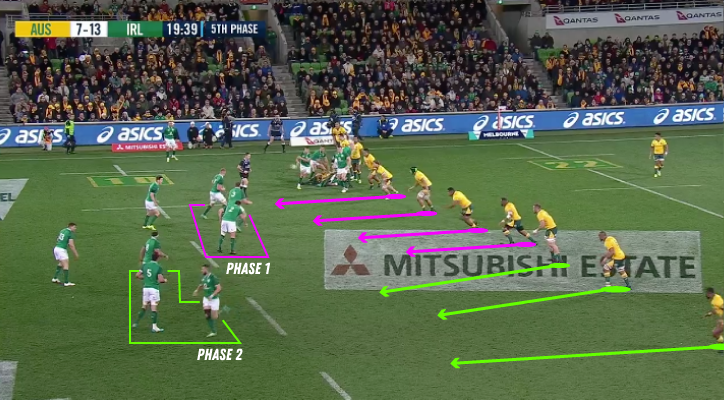 The initial four Australian defenders in the line (pink) have to be concerned about the first phase of our openside attack. At this point, we’d already shown a willingness to tip the ball on in these scenarios which shifts the point of attack and unsettles forward defenders because they can’t commit their weight to nail the ball carrier.

The other three Australian defenders (green) have to be wary of two things – the second phase or Ireland getting this ball wide straight from the initial pass from Murray. That kind of scenario creates space to work with, reduces the chances of a turnover (because of the inbuilt ruck support of the Heavy Carrying Umbrella), and punished the opposition in the carry, and at the ruck.

Ireland used this kind of bully ball to retain possession, force decisions on the Australian defence and give us an opportunity to impose ourselves physically.

The following carrying alignment gets a lot of criticism in my mentions whenever Ireland lose a game. You’ll have seen Ireland line up like this multiple times over the last couple of seasons. 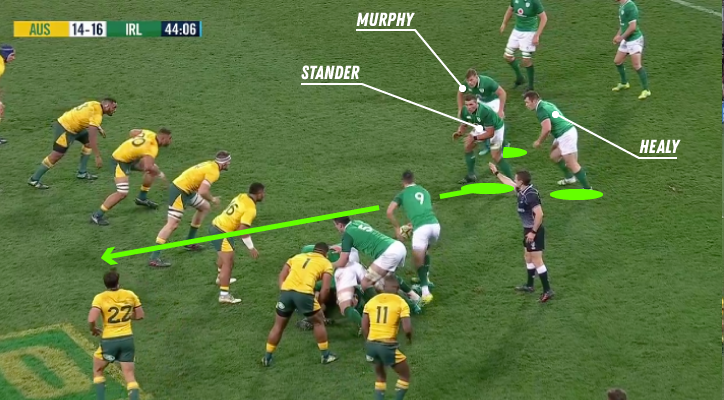 It’s the one-out carry. Ireland will line up a pod of three forwards close to the ruck – be it in this position on the flanks or in centre field – and then carry hard into the massed Australian defence.

In this instance, it gets Stander, Murphy and Healy onto one Australian defender for a massive 10m+ gain right up the side of the ruck.

At a basic level, it allows Ireland to reset around the corner of the one-out carry and force the opposition into a folding decision because we’re almost guaranteed to retain possession due to the cleaners already being in place before the ball ever leaves the previous ruck. Do we stay on the blindside or fold onto the openside? A one-out carry gives you time to reset while forcing the opposition to think. That’s always a good thing.

In this instance, it gave Ireland excellent gain line, allowed us to get a shot on two Australian forwards and multiple options off the recycle. 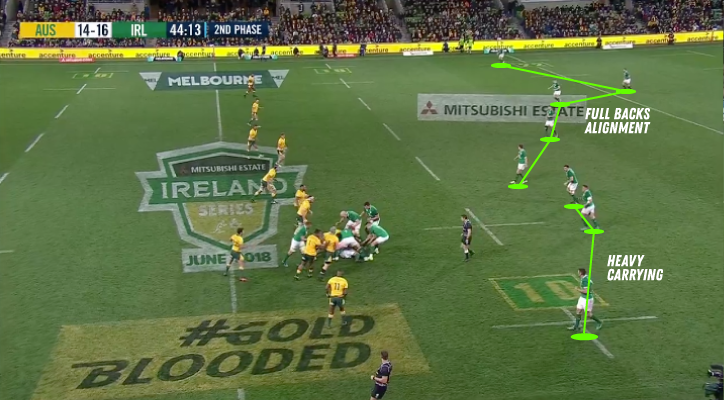 We can go across the pitch through hands, we can hit Furlong or Scannell for another close-in carry, or try out O’Mahony on the blindside.

The built-in ruck support allows Ireland to rack up the phases and force Australia into multiple folding decisions in a defensive set while being constantly punished at the breakdown physically.

Ireland’s 3×3 pod system – which we use on much of our possessions – is built on this principle and allows us to hammer teams on multiphase ball.

Regardless of how Ireland aligned, we would have to deal with the breakdown prowess of Australia’s two opensides – Pocock and Hooper. Much of their threat was removed by the narrow alignment I mentioned earlier but that doesn’t mean they weren’t trying to get over the ball, far from it.

We handled them incredibly well for the most part, in the heavy channels and on transition rucks. Here’s a quick medley of Ireland’s work on both.

There were many, many more.

The accuracy, low angle entry and venom we were bringing to the ruck was the standout feature of this game for me, especially when it came to attacking Australia’s opensides over the ball.

I’ll get to Furlong’s in a minute, but I thought this one from James Ryan was just as impressive from a physical perspective.

Look at the low angle that Ryan gets when tractoring Pocock off the ball there. He’s practically horizontal to the ground but he’s still got the leg drive and core strength to finish the job with the assist from Kearney.

This one, from Furlong, was described by Rob Kearney as the best cleanout he’d ever seen. I find it hard to disagree.

I’ll just focus on Furlong’s bit here – although Kearney and O’Mahony, in particular, were equally as impressive – because it was one of the most talked about moments. I’ve heard a few people saying that it isn’t that impressive because any prop would look good in the cleanout with a 15m run-up. The problem with that statement is that tighthead props don’t get in the position to (a) get a 15m run at a ruck and (b) actually have the wheels to get there.

Furlong hits this like an openside flanker. He’s low, he’s legal and he’s hurtling nearly 20 stone around at an unearthly pace. It’s one of the impressive things I’ve ever seen on a rugby pitch. And who was it targeted at? David Pocock. That theme runs through the game, with a number of strong ruck contributions from multiple members of the matchday squad.

Here are the key ruck performers.

There are a few notable results there.

Devin Toner’s 41 positive ruck contributions is a massive endorsement of his work rate and attention to detail. Most of his game was spent dropping his significant bulk at an angle on Pocock and Hooper to knock them off their feet over the ball. He’s followed closely by the immense work rate of Ryan, Furlong and Stander but I felt the work of Niall Scannell deserves special mention. He had 15 dominant ruck actions – second overall – on top of 11 carries and four tackles in just 48 minutes. That’s impressive going at this level.

Peter O’Mahony’s offensive work at the breakdown was equally as impressive with 19 dominant ruck actions, as well as multiple defensive interventions. His work on Pocock and Hooper directly was notable, with a few textbook cleans, shots and power latches.

Of the backs, I thought Keith Earls, Garry Ringrose and Rob Kearney were the standouts, with multiple timely ruck interventions on the pinch as a support rucker in midfield and on transition. Keith Earls showed his usual technical excellence on a transition ruck against Michael Hooper of all people;

Look at the way he drops to his knee, gets hands on Henshaw and then beats Hooper to the clamp before driving him off the ruck. Henshaw’s fight on the ground gives Earls every chance to finish this, and he does so with the kind of technique his ould fella would be proud of.

Kearney’s work as a second ruck option was notable during the game, but I thought this one on transition was really important given the position.

Ringrose (and Henshaw) regularly slotted in as the second ruck option in Ireland’s 3×3 system and imposed themselves incredibly well.

Ireland will need to bring this kind of physical pressure – and more – to this weekend’s decider but if they do, a similar result should follow.

I’ll be looking at Ireland’s attack misfires in this game later in the week and look for ways that we can sharpen those up ahead of this weekend.