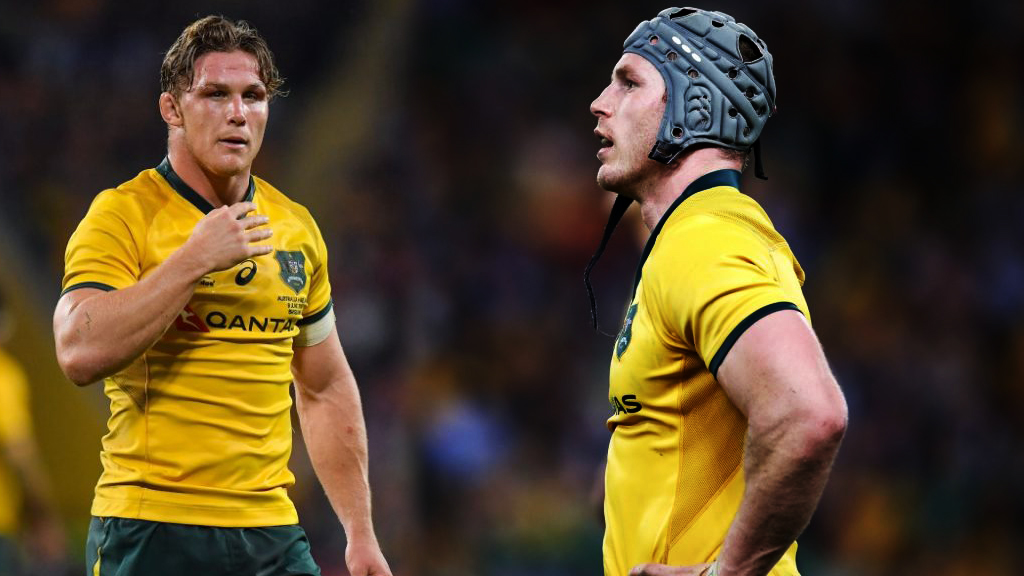 How do you deal with a pair of opensides like Michael Hooper and David Pocock?

Forget the numbers on the back, Hooper and Pocock are deployed by Australia as classic openside defenders when it comes to defensive sequences. On Saturday, both players were hugely effective in attacking Ireland’s possession, slowing our recycle and turning the ball over on a few occasions. How do Ireland combat these two heavy fetchers in the second test?

It won’t be easy – and not as straightforward as dealing with one specialist fetcher – but it can be done relatively easily by tweaking a few elements in how Ireland set up.

Before we do anything, we should acknowledge that much of what Pocock and Hooper do at the ruck is right on the line of legality. All good opensides play right to the edge when it comes to attacking the ball at the breakdown but Pocock and Hooper’s physical proportions (much like Chris Cloete) give them an edge for preventing the quick recycle of possession.

Both players – but Pocock in particular – are excellent at latching onto the tackled player and blurring the line between tackler, tackler assister and first arriver.

Here’s a decent example of the principle;

Pocock gets cleaned out by Stander here but, for me, this is the exact kind of ball that Pocock likes to attack. There’s a bit of separation between carrier and support (from an angle POV) but you can see how Pocock generates a lot of his holding on penalties. There’s no real release on Kearney after the tackle but Pocock’s lower body gives the impression that he has released and can legally contest for the ball.

Here’s another example of a breakdown penalty that could have gone the other way;

Right on the edge. For me, Henshaw isn’t held in the first tackle so when he gets to his feet, Pocock becomes the tackler and, as a result, must release before contesting for possession.

This isn’t complaining by the way – about Pocock or poor Marius – because I’ll be looking for Chris Cloete to be doing the exact same in a red shirt later this year. What I hope it’s doing is highlighting the dangers of facing an elite openside and how “just rucking better” isn’t the way to deal with them.

When you’re playing against opensides like Pocock and Hooper, you can’t just do the usual tactic of running straight at the jackal with the ball like you would against a team with one elite heavy fetcher. The theory here is that a fetcher can’t fetch anything if he’s at the bottom of a ruck and getting a bit of treatment from our cleanout guys for his trouble.

When they have two heavy fetchers, it becomes a different proposition. They are most dangerous in this position, either as the C defender or clustered around the C defender. 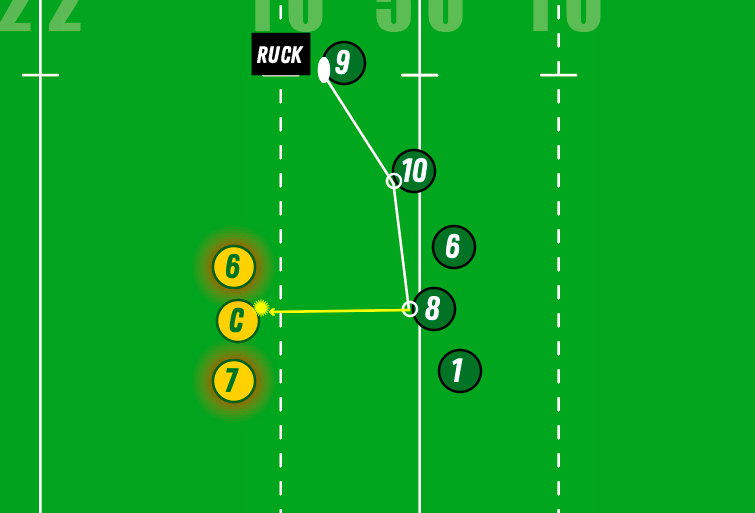 In this position, they can attack any breakdown that is further than two passes away from the ruck by pressurising the accuracy of the oppositions clean out. The above graphic is actually the ideal situation from an attacking situation because you’d hope that two cleaners could deal with any breakdown threat but when you deploy two opensides in this position means that anything less than ultra accurate cleaning out and phase structure (literally where you carry the ball) leaves you vulnerable. 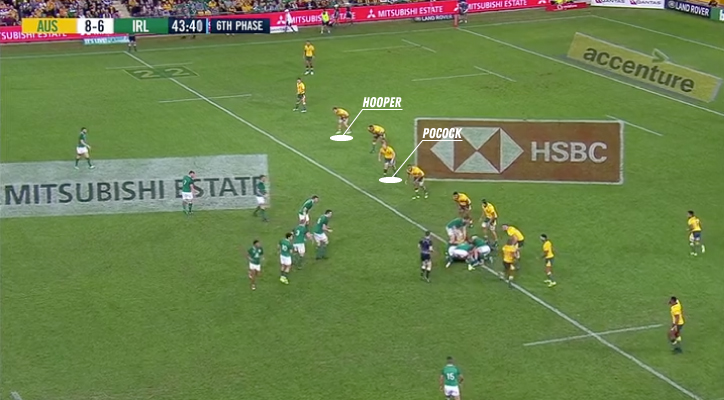 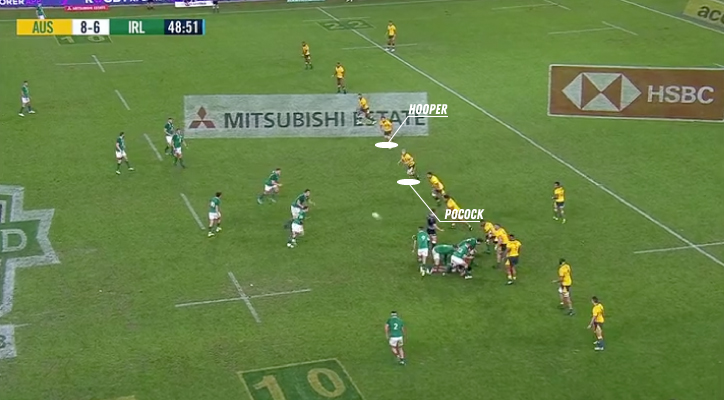 Australia look to station Hooper and Pocock on the openside of a ruck if at all possible. You don’t split your opensides either side of the ruck because then you may as well be only playing one of them. They are most effective when deployed in pairs where they can work in tandem to manipulate the attacking team’s carrying.

In the above image, they are forcing Ireland to carry narrow and, with this alignment, Australia are backing their front five to stand up to Ireland’s physical pressure.

When we left the “umbrella” of our heavy support, watch what happens.

Forget the legality or otherwise – the ruck position away from the heavy support of the forwards forced the turnover. We had Carbery and Stockdale cleaning out while Murphy was slightly off the pace in his support line. When backs are trying to clean out forwards, it usually ends in a turnover. Look at Foley and Genia trying to get O’Mahony off the ball when Hooper loses his footing here for a similar result in a similar position.

In general, when the ball leaves the heavy support radius of your forwards, the breakdown threat increases exponentially. That goes double for the direct aftermath of kick transition events. On phase play against Australia, the red areas below are the dangerous parts of the field.

Why? That’s where the likelihood of a back cleaning out a forward is increased and with it, a greater risk of a turnover – especially with those two around.

Look at this still from the first half. We’re good here, right? 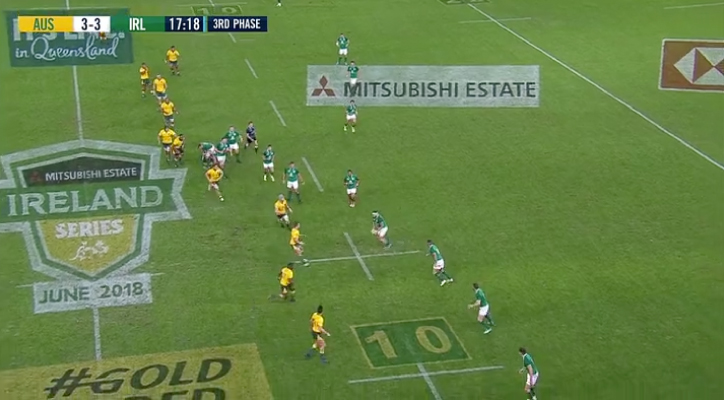 Wrong. What we’ve got is a front five forward carrying the ball with all backs in support. Unless Herring passes the ball – and he should have – we’re in serious danger of turning over this possession. 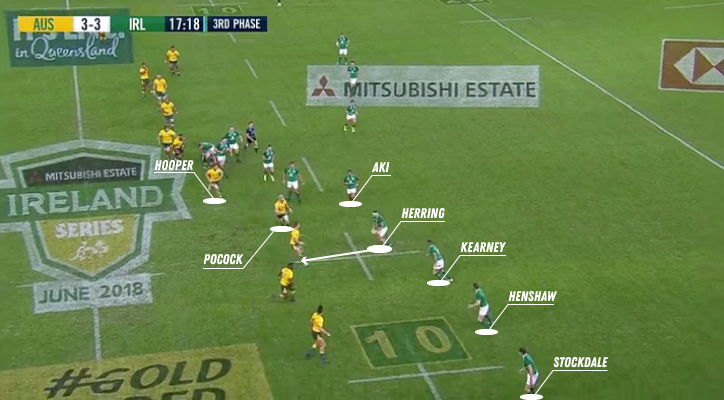 Pocock gets in over the ball, Kearney can’t clean him out and by the time Bundee Aki can blast Pocock off his feet, the ball has been turned over and Australia are away on a breakdown transition.

Australia gave Pocock and Hooper license to move as a pair in line with the passage of Ireland’s possession and harass our rucks every other phase.

That’s why they had 31 tackles between them – Pocock would often be the second arriving player to Hooper’s tackle and vice versa.

Watch Ireland’s phase sequence here and watch for two things – Hooper and Pocock’s relative position to each other, and the area of the field where we lost possession.

Hooper’s tackle and swing after the tackle stalled Stander’s cleanout line and made space for Pocock to arrive over the ball and get a turnover. Once Pocock is over the ball like this with that half a second to work with, he’s nearly impossible to get off the ball, especially when Murphy arrives later than I’d like my openside to getting to this ruck.

That’s great an all – but how do we stop them?

Ireland went into test one without the full roster of ball carriers that we have used to great effect in our other top class games over the last year or so.

I showed the forward carrying umbrella other to illustrate the rough concept of where you’re most at risk from a turnover but if I was to accurately describe the forward umbrella in test one, it would look more like this.

We didn’t have enough carriers to narrow Australia up and that, in turn, forced us to spread our ball carriers wider apart and, as a result, become more likely to lose support options and get turned over. Stander (13 carries), Henderson (10 carries) and Ryan (16 carries) were our primary ball carriers and they were heavily augmented by Aki (19 carries) but outside of Ryan, we never really managed to dominate the Australian’s with the regularity we would have liked. CJ ended up carrying a lot of ball close to the ruck and Henderson had a poor game with the ball in hand by his standards.

The more power carriers you have in your pack, the easier it becomes for each of those carriers to dominate the opposition.

Ideally, Ireland want to have at least four power carriers in the starting pack and whenever we’ve had that, we end up shaping games in our favour.

With only three main Irish forward ball carriers in the first test, Australia were able to use a lot of line speed on their defensive blitz because Pocock and Hooper were forcing us to narrow and make low percentage plays to get around their 13/2 centre field defensive alignment.

Ideally, Ireland like to be the ones that do the narrowing through the rugby equivalent of blunt force trauma.

Watch this clip from the England game (after EIGHT phases) and try not to kick a table over;

That’s how you narrow a defence up and, for want of a better term, kick the fucking brown stuff out of the opposition for 15 odd phases.

Every time Ireland recycle, there was another power carrier ready to hit a channel one carry with two other brutes on his shoulder to rough up the opposition on every phase. Ireland want to bring Hooper and Pocock closer to the ruck to take some of these shots. We don’t want those lads floating out to the edge where their speed and ability to move into space over the ball is useful. We want them putting their relatively light frames up against Tadhg Furlong, Cian Healy, James Ryan, CJ Stander and Dan Leavy in close quarters again and again and again until they’re sick of it.

After that last carry by Leavy, look at what the next phase was; 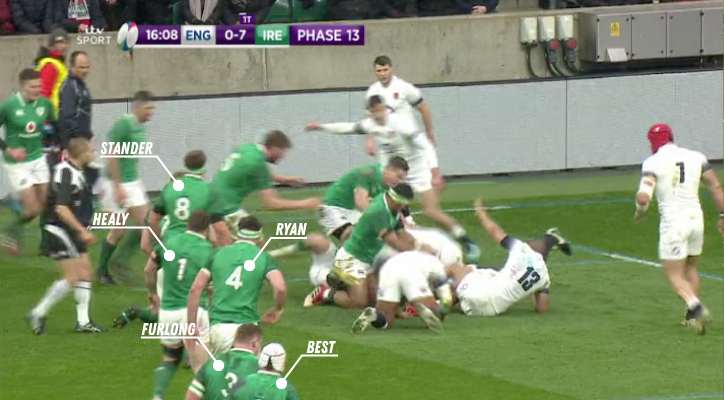 Ireland are dictating the shape of the game to England and can do the exact same to Australia in test two with the addition of Leavy and the retention of Furlong and Healy to the starting XV. That way, we can shape the game from the first minute and make carrying two opensides an expensive selection decision for the Australians, should they make it as expected.

When their opensides have to cluster into your main forward support area, they become incrementally less effective as they don’t have the time and disrupted space to work with, especially with the likes of O’Mahony, Toner and the other carriers cracking over the top. If you can narrow the opposition defence, you can bring your Ringrose/Earls/Larmour into play. 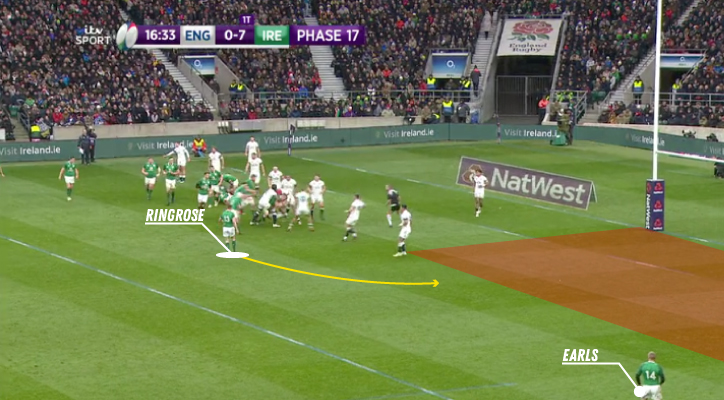 When Ireland bring that four/five carrier spread to the pack, there are very few packs in world rugby that can live with us on multiphase possession. That’s how we can get Sexton coming around the corner to get at Foley, Beale and Kurevi with a good angle to work with and finishers waiting on the edge.

Let’s hope for something similar this Saturday.