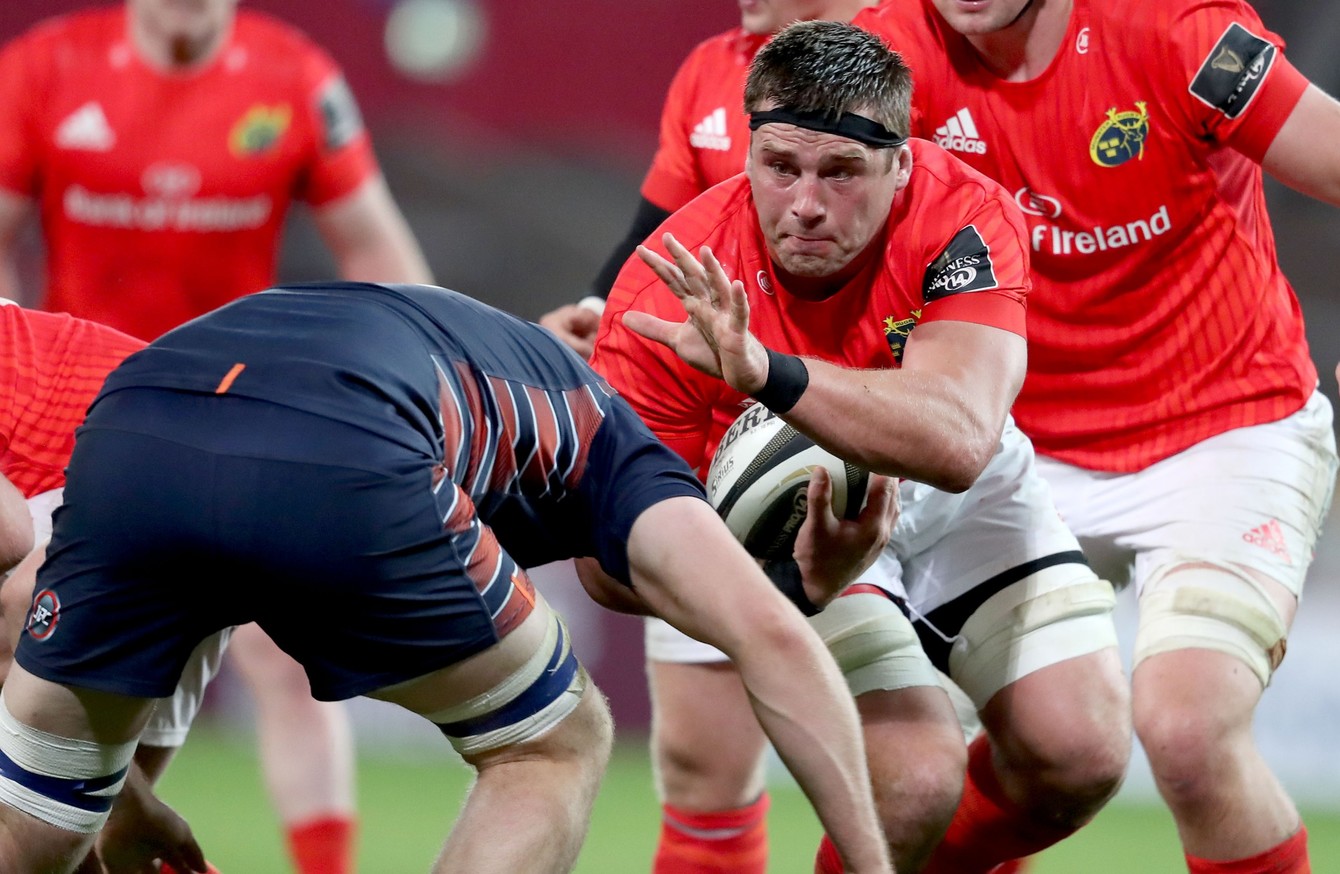 There's a lot of tricks to overcome a size disadvantage

By Tom Savage5 min read
One look through Edinburgh’s teamsheet on Saturday would give you a good idea of where they were set up to be particularly strong – maul defence. All through their pack and replacements, Edinburgh had big, heavy international quality maul defenders like Haining, Toolis, Gilchrist, Sutherland, Nel, Schoeman (not an international yet but he will be the minute he qualifies) and Berghan.

Drilling through this Edinburgh pack at the maul would be a difficult challenge. If we look at the pack construction for this game, I think it’s fair to say that we were quite well set up to defend Edinburgh but without key offensive maulers like Kleyn, imposing ourselves on Edinburgh offensively would be a challenge.

Jack O’Donoghue had a particularly good game on the defensive front. Here was his speciality – thorn maul defence. Look at O’Donoghue’s low body position with three points (both feet and one hands) on the floor. 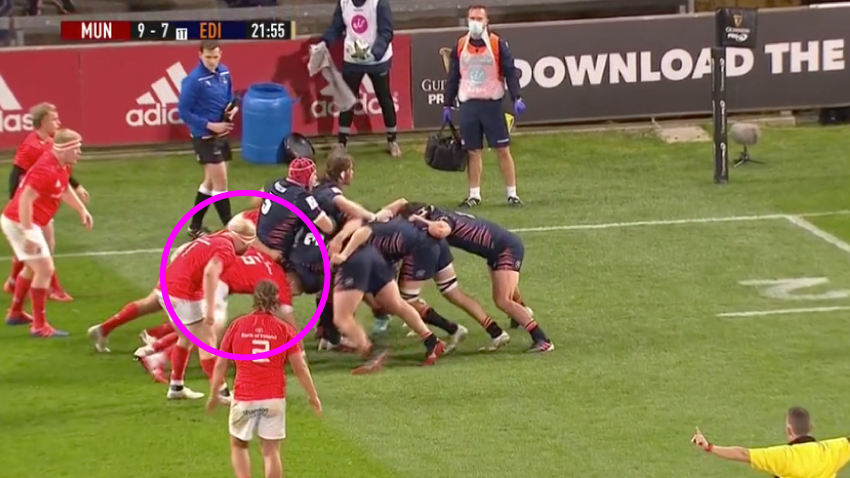 This means that he’s not effectively counter-shoving – he’s more of an obstacle than an active shover – but if he can retain stability the counter-shove of Beirne and Wycherley will help to drag the Edinburgh maul around O’Donoghue.

As Wycherley pulls up the touchline side, that creates a subtle lean on the front of the Edinburgh maul which allows O’Donoghue to get under the bind between Nel and Gilchrist. The more Wycherley pulls, the more Edinburgh move forward towards the touchline but with each step of forward movement, O’Donoghue gets closer to the ball carrier until eventually, he’s able to swim straight through on him.

Have a look at the entire thing.

How does O’Donoghue appear to teleport to the back of the maul? The maul defence scheme simply allowed Edinburgh to move around him while O’Donoghue stayed in place. This technique allowed Munster to defend a seven-man Edinburgh maul with only two opposite shovers, Wycherley dragging and Loughman adding some weight intermittently.

Offensively it was a different story. We didn’t seem to want to go shove for shove with Edinburgh too often and a lot of our output was based on producing maul feints to punish an over-exuberant counter-shove.

Here’s an example of the concept;

This didn’t really work, for me, because Schoeman and Ritchie got a dominant shove on Loughman that collapsed our touchline side. This meant that Casey had to run a slightly altered attack line from the front that took him wider than I feel was optimal.

I think if we can hold Schoeman on the touchline side, we open up a tighter line for Casey where he can perhaps cut at McInally’s inside shoulder (pink line) instead of arcing out to McInally’s outside shoulder (white line). 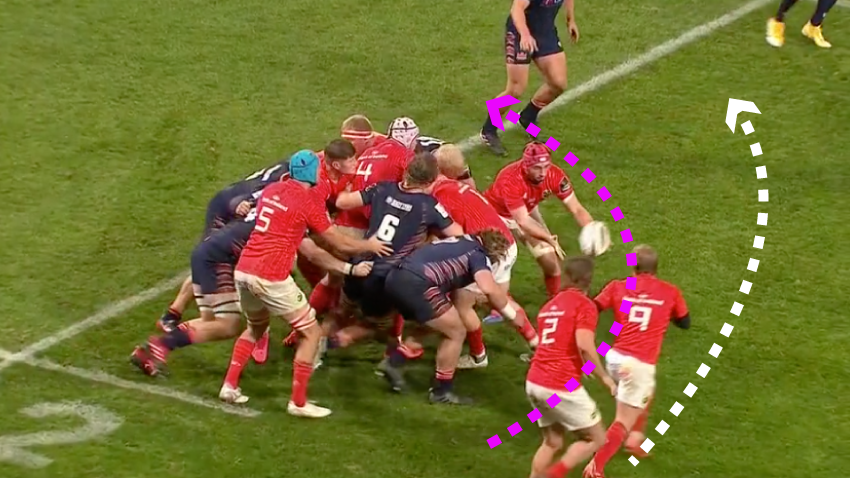 Midway through the second half, we had a decent cut off their maul in a straight shove around the halfway line but we struggled to gain any real ground.

You can see the strong Edinburgh counter-shove straight on the landing here and how much struggle we had gaining two or three metres on an initial 7 on 4 that developed into an 8 on 5 by the time it broke.

Edinburgh stopped this one relatively comfortably despite some strong work by Coombes, Cronin and Ryan against a good counter-shove.

10 minutes later, Munster would have a close-range maul opportunity with the game on the line roughly 8m out from the try line. Our previous work in the maul would show that driving Edinburgh back over their own line or even deep into the 5m red zone is unlikely but the clock is also a factor here. We don’t necessarily want to get into a slow maul situation which eats up a lot of time and/or pushes us back closer to the 22m line. We’re presented with three options after we decide to go with a full lineout scheme. 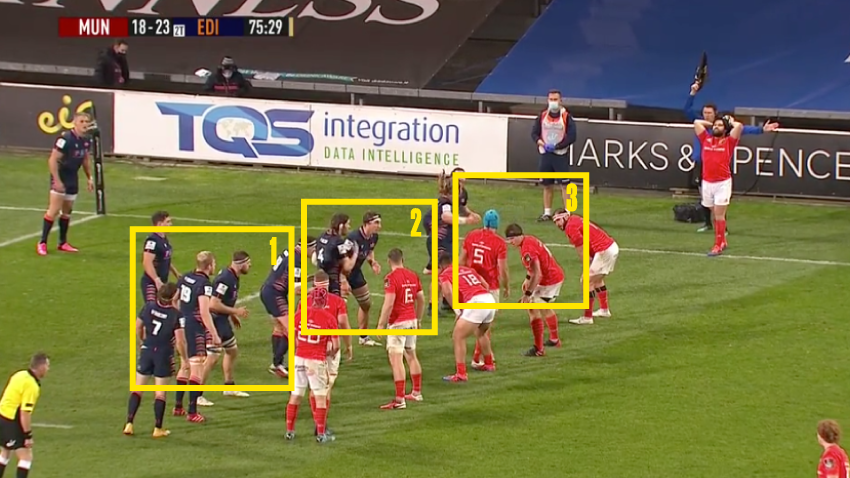 Box 1 is the target Edinburgh want to defend the least because it’s the most dangerous place for a Red Zone maul to form. They have stacked Watson, Davidson and Haining in that position to either attack the throw in the air or immediately sack any maul that builds there before it gains momentum.

Box 2 is the second most dangerous area for an offensive maul to develop because the tail and the front of the maul can coalesce in behind the jump pod quite quickly and, if we get a good set, can gain early momentum with enough space from the touchline. Edinburgh have stacked Berghan, Toolis and Ritchie here as they mirror the position of our props.

Box 3 is the easiest place to throw to but the hardest place to maul from as it’s easier for Edinburgh to drive us out towards the touchline and the bulk of our maul components have to move from further away to join the shove.

We choose to go to the front – Box 3 – and the immediate Edinburgh reaction is predictable. They are lined up to pin us at the front of the lineout and then drive towards the touchline. 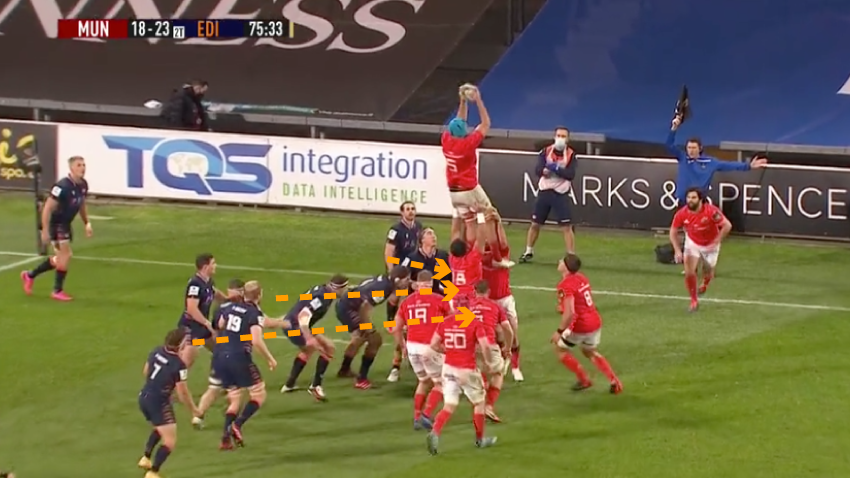 If we’re struggling to impact Edinburgh at the maul, why are we looking to maul from the most difficult position? Well, we aren’t. The key men to watch in the upcoming GIF are Jack O’Donoghue, CJ Stander and Kevin O’Byrne. 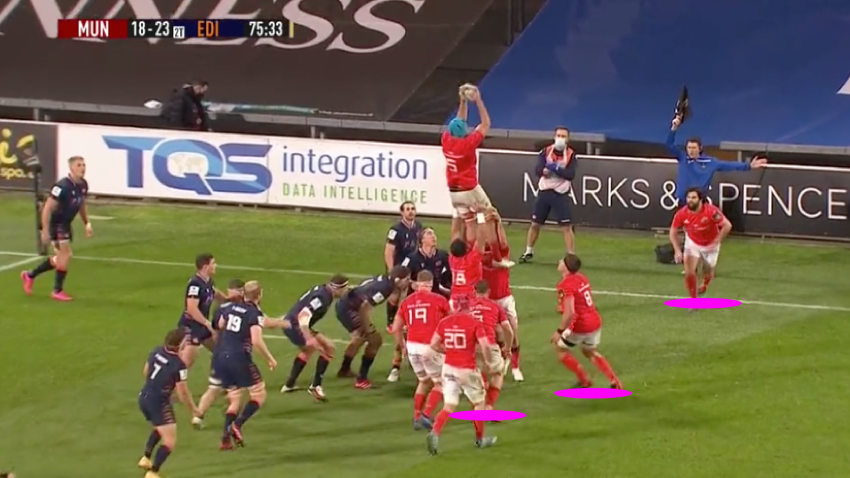 This is a wormhole maul. We weren’t set up to go shove for shove with an Edinburgh defence who wouldn’t counter-jump at the front of the lineout and would be fanatically powering Munster at the front and then towards the touchline. We wanted that shove.

A wormhole maul is when you set up two mauls (or maul and a carrying pod) where one of them is designed to be dominated by the opponent to create a clear lane for the second maul to attack an undefended spot.

If this was a conventional maul, I think Stander acts as a traditional receiver, takes the ball from Beirne and latches on to drop back as Coombes, O’Donoghue and Hodnett snap into place but instead he shapes his body to the side. His fake before the landing was to act as a visual cue for the Edinburgh +1 (Willemse) that yes, this is a maul at Two and that they should pile in towards the touchline rather than file over to the 5m tram.

O’Byrne’s line after the throw tells you something is up too. 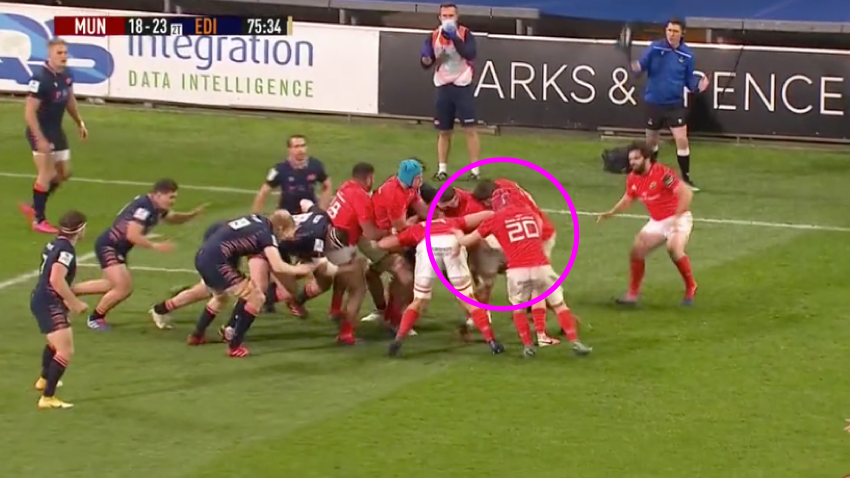 This is the wormhole. O’Donoghue takes the ball from Beirne while looking like he’s adding his weight as a pusher and he drives up the side of the Edinburgh maul, who are lockstep shoving against Munster’s decoy maul.

Schoeman gets a crucial scrag on O’Donoghue to stop this pod from latching straight through onto Van Der Merwe or Groom but this wormhole gets us right up to the 5m line with the bulk of the Edinburgh pack counter-shoving. 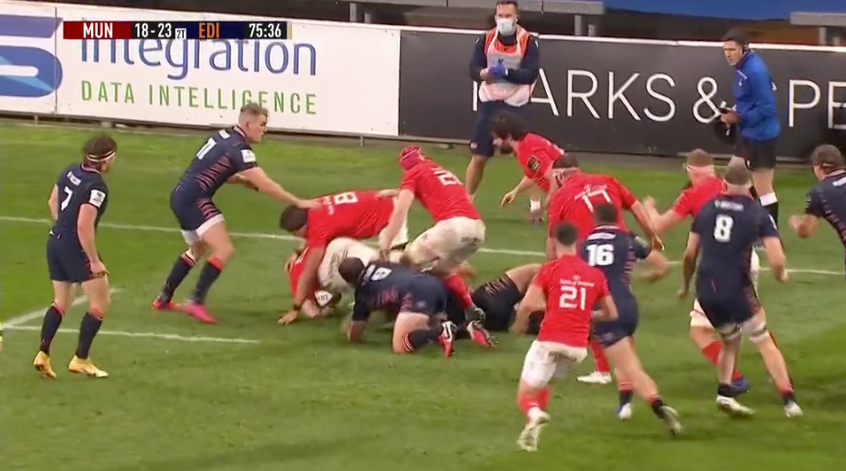 Is it illegal? No – because O’Donoghue is carrying the ball with Stander and O’Byrne latched behind him so there is no maul law consideration to worry about. Instead of getting into a shoving contest that would eat valuable seconds and likely lose ground when we spread the ball wide from a negative position, we had a dynamic platform to work with on the 5m line and two phases later, we were 2m away from the try line before scoring a few phases later to win the game.

Our imaginative lineout work and maul builds continue to intrigue as we build into the new season and I’m excited to see what we come up with next.