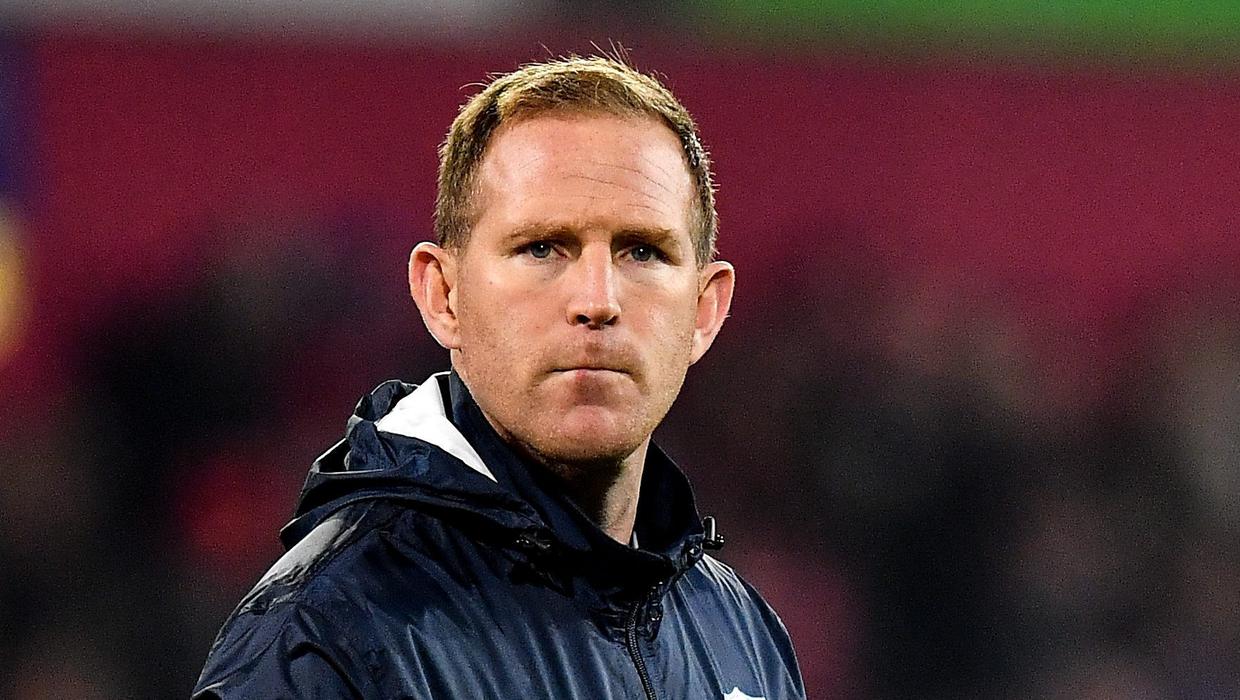 What’s The Story With…

I’ve been doing Three Red Kings since September 2015 and, in that time, Mike Prendergast has been consistently linked with a move back to Limerick. Back then, Prendergast was working with Grenoble under Bernard Jackman and was already beginning to make waves in the dog eat dog eat more dogs eat all the dogs’ world of the TOP14. Since then he’s racked up an excellent French career. When Grenoble were relegated, Prendergast jumped to Oyonnax for a season, before spending the next season with Stade Francais. After that year, Prendergast was hugely in demand before the World Cup of 2019. Toulon were really interested in signing him, there were rumours of Munster interest (before Larkham was hired later in the summer of that year) but it was Racing 92 who jumped first and hardest with a four-year deal. 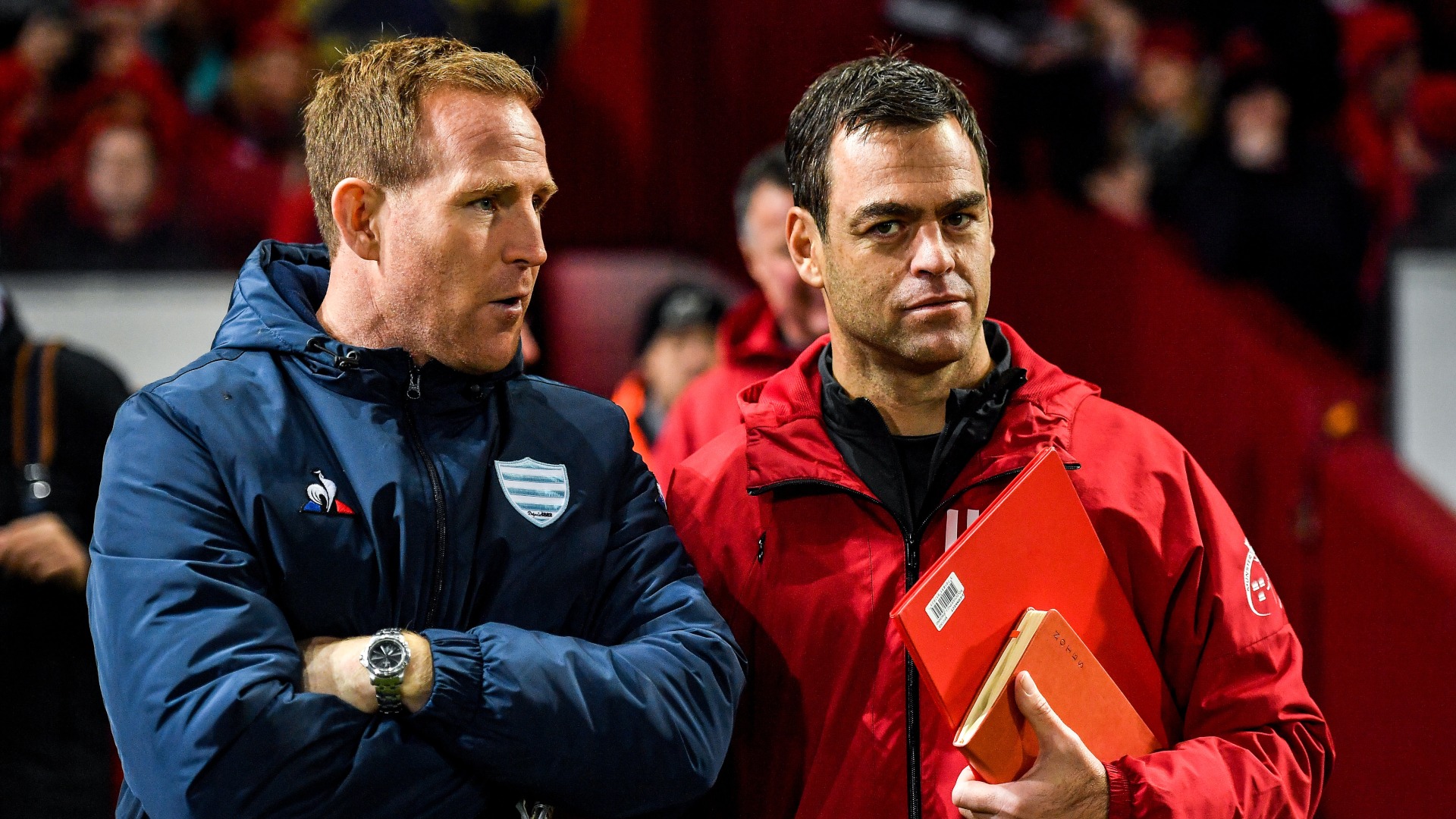 Since 2019/20, Prendergast has been running Racing’s attack and, in that time, they’ve consistently finished in the top three for tries scored and bonus points acquired. That, in itself, is notable because the TOP14 exposes spoofers like salt on a slug. If you weren’t up to that level as a coach, it would be immediately obvious and while there are certainly issues at Racing as they go looking for another Bouclier their attacking game wasn’t one of them.

Now you might say that coaching a side that has had Finn Russell, Virimi Vakatawa, Gaël Fickou, Kurtley Beale, Simon Zebo and any number of colossal forwards is easy but to that, I would say – no, it really isn’t. If anything, it’s harder. That concept is out there, though, but it completely misunderstands what an attack coach actually does day-to-day at the elite level. You aren’t out there teaching a guy like Finn Russell how to pass the ball or showing Virimi Vakatawa how to offload. You are taking the talents of the players available to you and devising a system that gets the best out of the group on-field. If you can’t do that, you don’t last at a club like Racing 92 for one season, let alone three and another to go before deciding to leave of your own volition.

It’s also been said that Racing 92 are a money club and, while that might well have been true a few years ago, I’m not sure it fully applies to the last two or three years where they have gone mostly JIFF qualified through their own espoirs or for value pickups from elsewhere in the TOP14. Sure, they’ve augmented that with Kurtley Beale, Luke Jones, Trevor Nyakane and Gaël Fickou (although I’d hesitate to count him here because Stade Francais were literally paying Racing 92 to get Fickou off the books last season) but the days of signing the likes of Johnny Sexton, Dan Carter, Ali Williams, Chris Masoe, Donnacha Ryan, Joe Rokococko, Simon Zebo and Leone Nakawara for big, big money are very early to mid-2010s. The Racing 92 of the late 2010s and early 2020s so far hasn’t really used the free-agent market the same way.

The last cornerstone signing they made from outside France was Finn Russell, the year before Prendergast arrived at the club. Russell is something of a divisive figure when it comes to how he’s perceived. Is he an elite #10? Is he a show pony? Is he a chancer? Is he a maverick matchwinner? I think he is all of these things and using him in an attacking system would be a massive cognitive challenge for any coach. I think Prendergast has managed it better than anyone – certainly better than Gregor Townsend at test level – and that’s something that illustrates his ability to manage players as individuals, as well as anything else. 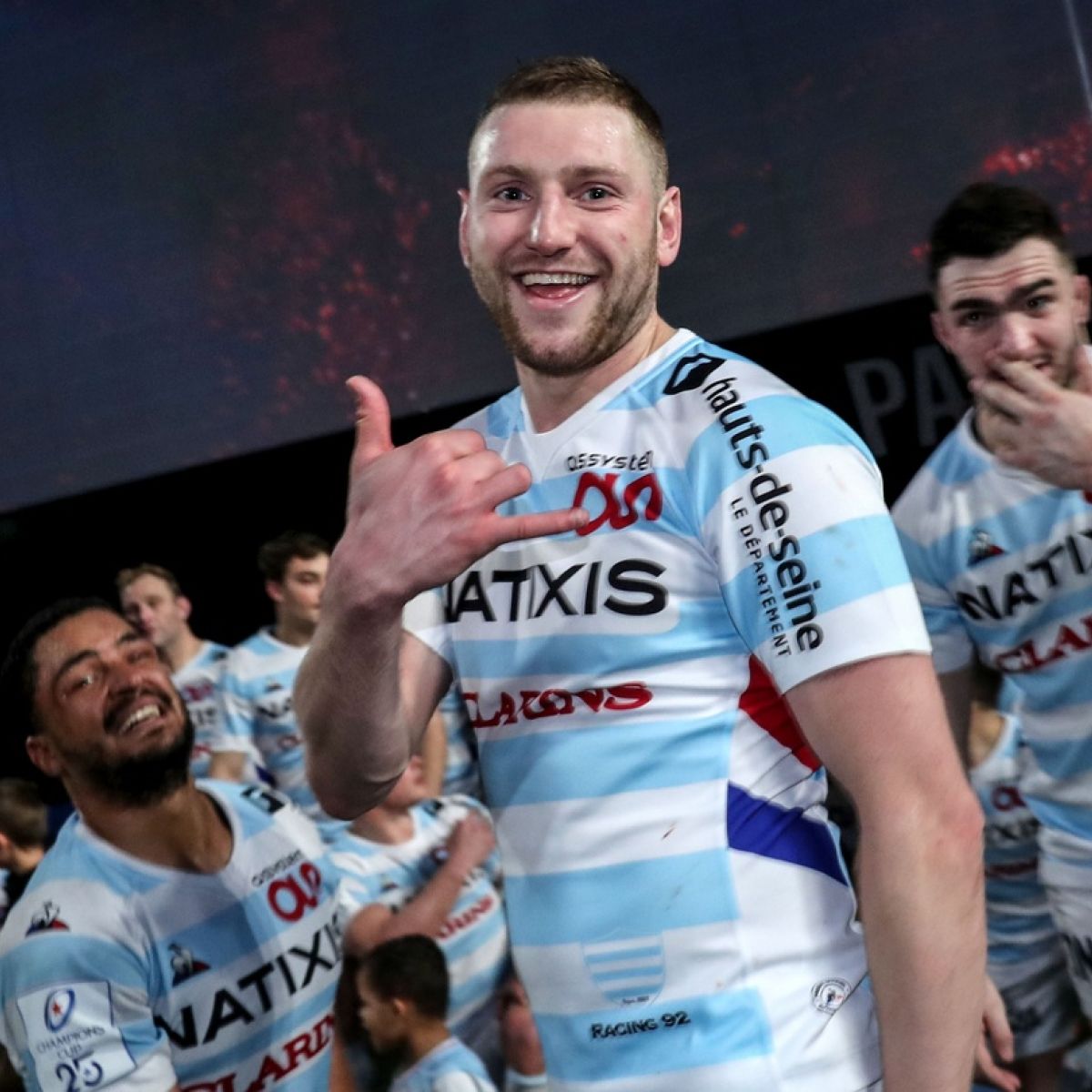 To integrate a player like Russell, you have to run a clean, clutter-free attacking scheme that allows players to express themselves – a vague enough ‘ould term, you’ll agree, but I’ll explain more later – while also maximising the Right Player/Right Place/Right Time set up that makes an attacking system run.

So what can we expect from Prendergast in 2022/23? He isn’t like Pat Lam in that he has a set style that he runs come hell or high water but I have a fair idea of what we might expect to see based on what Prendergast has done at Racing over the last few years.

My big takeaway from watching Racing 92 over the last two seasons was the segmentation that Prendergast has used between backs and forwards and the importance that scheme puts on his #10, #12 and #13 as key game runners. Aren’t the #10/#12/#13 important in every attacking build? Yes – but there are differences in emphasis.

In the 3-2-X system that Munster have used over the last few seasons, for example, most of the ball-handling has come through the #10 with others stepping in as and when required but with the #10 primarily anchored to that first receiver slot more often than not. Why is that? With a 3-2-X system, your midfield pairing is often on-ball relatively deep or relatively wider to facilitate more width in your forward alignment. Basically, if you spread your forwards across the three openside blocks – off #9, off First Handler and off Second Handler – your midfielders need to be bigger and more physical on-ball to cover the transit of the ball to the edge in a way that allows you to get the most out of your Edge Forwards. You want your Edge Forwards to be running into mismatches in the wide space so you’ve got to preserve that space for them to execute those mismatches

Your forwards and backs are really integrated together in this system because they have to be. It doesn’t work without it. That’s why Damian De Allende and Chris Farrell have been the defacto pairing for Munster under Van Graan/Larkham because they give you the physicality to bridge the middle space of the attacking line and create the compressions you need to make the Edge Forward section of the attacking line work as expected.

Because #12/#13 are expected to be short passing hitters in this scheme, a lot of playmaking pressure falls on the #10 to stay “active” as a handler to preserve the width because #12/#13 and even #15 are often used as platform carriers to set edge rucks when there isn’t a line break.

Prendergast runs a 1-3-3-1 at Racing with, as I’ve said, a lot of segmentation between backs and forwards. What do I mean by this? Well, a 3-3-1 system is essentially two banks of three forwards in the Off #9 and Off First Receiver slots but because more central space is occupied by forwards – three as opposed to two – it means you’ve got more edge space to work with but less space occupied by forwards. You’ve also got less attacking depth to work with because your key middle ground ball carrying is all forwards so you need less depth arrayed off your second handler. You can play flatter and with more “backstage” space for your backs to work with but that means you’ve got to change up your profile of midfielders to “untether” your #10 from the first receiver position.

For Racing, that was where Gaël Fickou came in as a guy capable of playmaking from that first receiver position on a regular basis, which allowed Russell to bounce out to the middle slot and beyond. 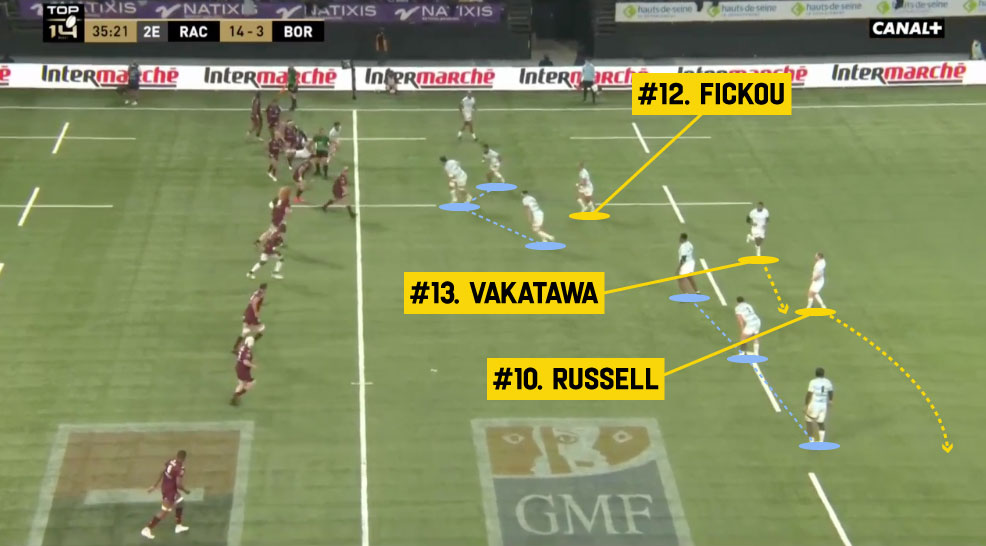 This play ended up scragged because of a loose pass but you can see the intent to get Russell – and Carbery would be the equivalent here – into that edge space. Look at where Russell ends up at the end of the clip! He’s practically at the outside-centre slot with Vakatawa sliding to a screen position behind the second pod of forwards.

Do Munster have a Gaël Fickou equivalent in the squad who can offer that varied playmaking while also playing with the kind of on-ball threat you need to make the system work? Not this season but, in Antoine Frisch, we will next season. In fact, when I saw Frisch announced two weeks ago I immediately thought that, wow, he’d really suit a guy like Mike Prendergast offensively speaking. And so it goes.

Prendergast’s Racing side play from quite deep because they’ve got a lot of rotating options behind their forward platform. At the moment they have Russell, Fickou, Vakatawa and Beale as a playmaking core with Thomas (Inside Layered Handler/Power Winger Hybrid) and Taufifenua/Imhoff (Pace Finishers) as key components. You will often see all of Racing’s outside backs in a small space on the edge of a longer attacking sequence because their system prioritises following the flow of the ball, getting multiple involvements on consecutive phases and creating overloads.

This “hack” of the 1-3-3-1 shape is a perfect example of all of these with Kurtley Beale executing a “power winger” style role on the phase.

Look at how that inside line gives the option to Russell and how the pod of three just keeps moving to completely overwhelm the Saints cover once the first break happens. Imagine a Malakai Fekitoa deployed as a power winger in that position and how it could unhinge defences? Exciting.

That was really well done by Beale in that instance but, if anything, I think his addition over the last two seasons has slightly unbalanced Racing’s attacking structure by adding too many handling options in a way that seems to clutter their flow of possession. That said I get why they signed him in the first place. Prior to Fickou’s arrival midway through 2020/21, Racing had Henry Chavancy at #12 who offered some of the playmaking they needed but not to the level they needed so Beale was a key part of their attacking scheme at fullback. Since Fickou’s arrival, Beale has sometimes struggled for impact as a lot of his playmaking involvements have gone to Fickou and it’s no surprise to see (a) Beale leaving at the end of the season and (b) Prendergast scheming for Warrick Gelant to arrive to replace him from the Stormers. Why is that? Gelant isn’t a massive playmaker for the Stormers but he is the 2nd highest offloader in the URC, has the 6th highest metres gained in transition and the eighth-highest number of carries.

That should give you an idea of who Prendergast visualised to join his core of outside backs and the principles they play with. You can get a deeper look at how Prendergast approaches the game in this podcast I did with him back in March 2020 but I think it’s safe to say that I’m really excited about what Prendergast will bring. It’s not that Racing never kick the ball – they do – but they play an on-ball style of rugby that I feel is exactly where Munster need to go to if we are to be successful going forward.