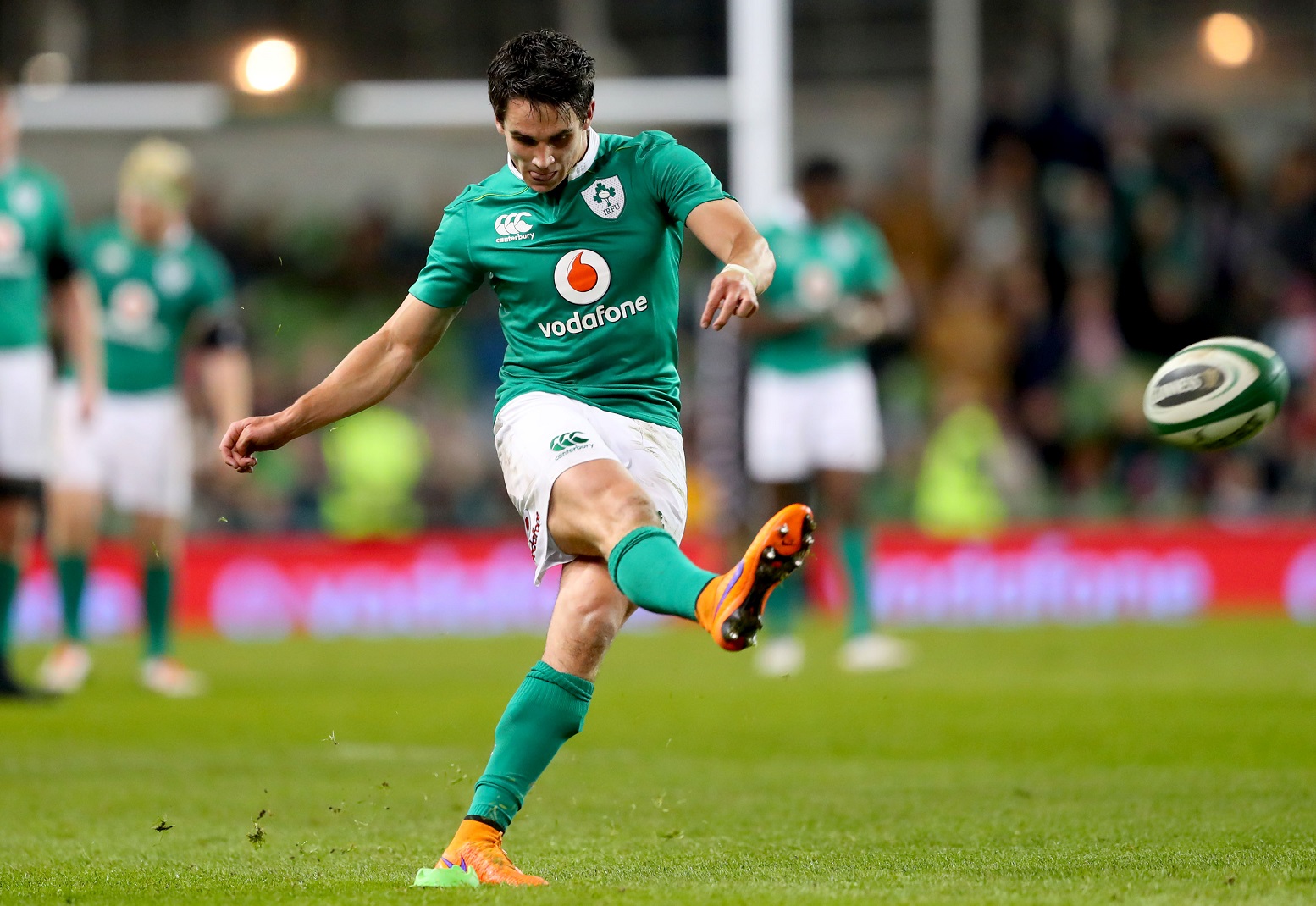 What’s The Story With :: Joey Carbery

So… Joey Carbery is a Munster player.

After a tonne of speculation, gnashing of teeth and big decisions Joey Carbery is making his way south to join Bad Guy Inc ahead of next season. On a personal level, this can’t have been an easy decision for the 22-year-old to make but it shows a guy that isn’t content to wait his turn for a starting 10 shirt, be it in blue or green.

The easy decision for him to make would have been to stay at Leinster, scrap it out for a #22 or #23 shirt on big Champions Cup games and wait to stake his claim for Sexton’s place in two or three seasons. But Carbery, with prompting from Schmidt and Van Graan, will have realised that nothing is guaranteed in professional sport and that a big opportunity now is better than a possible opportunity in three years when the whole landscape of the game might have changed. Three years doesn’t seem like a lot of time, does it? Three years ago, Munster had just lost Hanrahan to Northampton, BJ Botha and Gerhard Van Den Heever were still Munster players, our marquee signing was Francis Saili and Paul O’Connell was about to head off to Toulon, followed out the door by Donncha O’Callaghan to Worcester.

In rugby, three years is a lifetime and Joey Carbery, it seems, is carpe-dieming the hell out of it.

That is to be applauded. 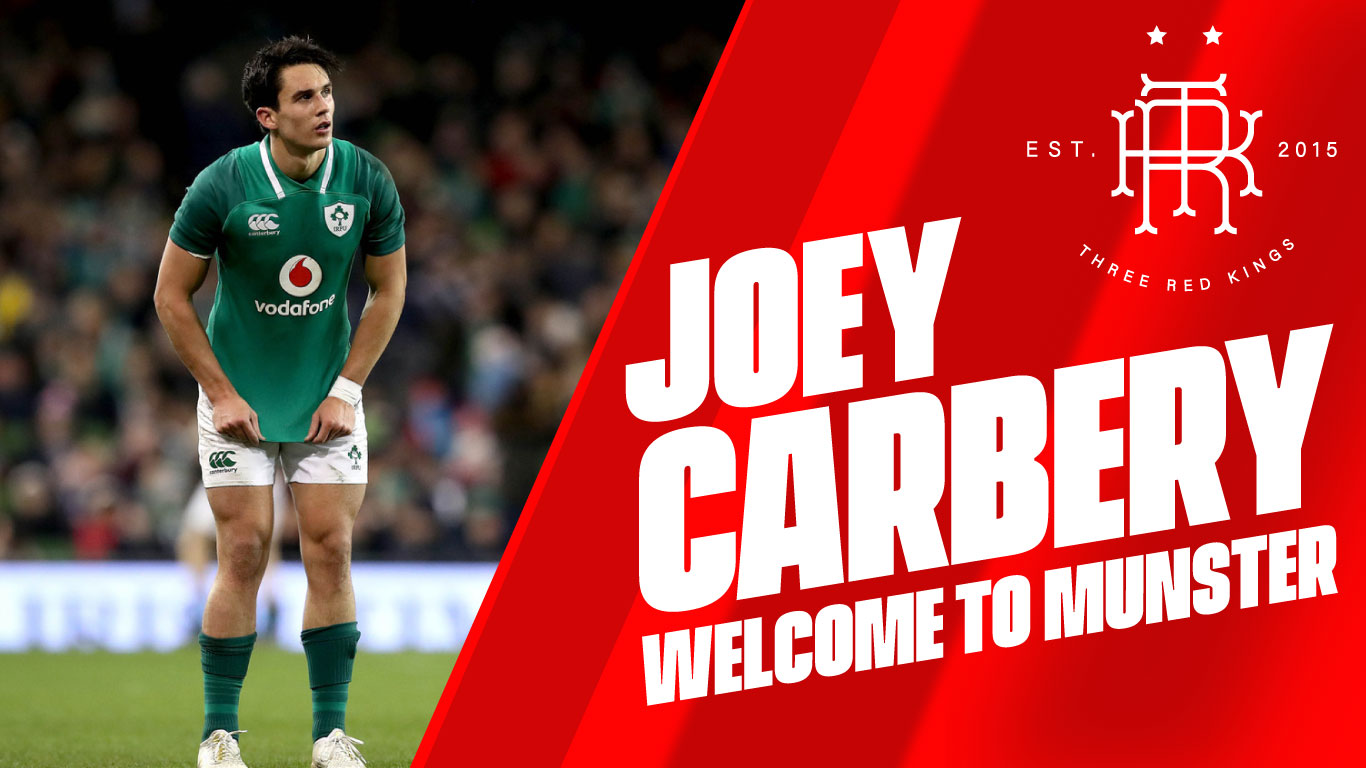 So what can he do?

The impetus for this move came from two things – Carbery’s ability and potential to play at 10 at test level and the impasse he finds himself in at Leinster. Joe Schmidt obviously thinks that Carbery has potential at 10 but at Leinster, Carbery only started at 10 once all last season. Sure, he had a few scrappy injuries that would have limited his availability at times for Leinster but when fit, most of his game-time came at fullback.

Carbery’s an excellent player, so he can make it work at fullback, but it isn’t where he can be world class. Ironically, all the things that give him that “world class” potential at 10 are what make him work so well at fullback. He’s incredibly quick, agile, durable in contact and has strike running ability in the wider channels but, to borrow and Eddie O’Sullivan-ism, playing Carbery at fullback hides his talent under a bucket.

It’s tough to garner what Carbery offers at 10 this season, given how little he’s played there but what I have seen from him in glimpses, shows me what Joe Schmidt rates so highly.

First, the negatives – Carbery is a little prone to coughing up kick transitions under pressure deep in his own 22 but exposure to Murray should limit that tendency. His ability to game manage when the pack is operating on less than equal terms is a bit of a mystery too but I’ve seen some good fundamentals from him that would suggest he’s got what it takes in this department. We’ll have to see how that goes but I’m confident he’s got that in his locker and it’s Schmidt’s confidence in Carbery that copperfastens that for me.

As for the positives – there are many.

Munster will attack off transition and set piece a lot next season. We’ve been working on our work on kick transition this season and with Cloete, Beirne, Cronin and O’Mahony in-situ for next season, Munster will be playing off a lot of turnover ball or penalty lineouts as a result of breakdown penalties. In that regard, Carbery is the perfect signing.

Carbery’s biggest qualities for me are his pace, flatness to the gainline, agility in closed spaces and his ability to reset incredibly quickly phase to phase.

Look at his tight line to Farrell here and his execution around the corner;

That’s quality work against a physical Fijian backline. That connection with Farrell has real potential, too.

In open play, you’ll see Carbery in this position quite a bit;

When Carbery is tucked behind a screen like this, he can be incredibly effective. That pocket – and Munster already play like this on certain openside plays – allows him to bring his qualities into the game with space to work with.

That screen lets him get his passing range going, work a kick or do something like this coming around the corner;

Carbery will devastate you if you show him any kind of space on a blitz. Look at that GIF – he power steps off his right to find the space, cuts off his left to hold the fullback and then finds Sweetnam with a perfect pass off his right side.

Carbery is probably the only 10 in Ireland who could set up that try like that.

His work off the back of screens gives him space to make decisions and time to execute. When he gets those, he generally makes good calls with his hands and/or his boot.

He isn’t necessarily known for his tactical kicking but he certainly has it in his locker when the opportunity presents itself.

When he’s not operating behind a heavy screen, Carbery is equally effective but in a different way. His biggest strength here is his ability to elongate the play and hurt teams as they readjust.

His step is a killer on this try but it’s set up by the distance he gets from the ruck;

He’s really good at combining distance from the ruck with a shallow depth to the gain line. When he gets that spacing right, he will cut you to pieces with his footwork.

Hadleigh Parkes is an excellent defender but Carbery puts him into a position to fail and then beats him one on one.

Munster’s style will suit Carbery’s skillset in A1 games next season. With Farrell as a heavy carrier to work around in the outside channels, Scannell as a left-legged second-five who can split first receiver duties, and strike runners like Earls, Conway, Haley, Wootton, Sweetnam and others to work with, Carbery will have the pace, passing range and reset speed to push his game on.

Look at his reset speed from phase to phase here;

He is excellent at working the space between phases and floating to where he needs to be. That kind of attacking tempo puts him in position to make plays for others or himself. Carbery’s pace and step are such that he manipulates defences to cluster on him and that, in turn, creates space elsewhere. Look at how Fiji began to narrow on Joey after he sliced them up for the first try shown above here;

The longer Carbery plays at 10, the more you can manipulate the opposition in the video room before you ever take to the pitch. “Watch Carbery’s step off first phase” is a powerful decoy for Munster – and Ireland – to work with once teams start breaking his game down as an established, first choice 10.

If you combine that ability to float around the corner and line up flat, you have a guy who brings others into play off both sides with quality passing at every range.

As for kicking, Carbery has excellent variation in his work with the boot once he has space to execute. He’s a talented cross field kicker and his pace gives him a tonne of chipping options, which he’s really good at executing.

Everything the opposition will scout about Carbery will make chips like this to Conway, Earls, Wootton, Haley a likely “B” option off wide rucks on multiphase or off lineout.

As for garryowens? Well, he’s got those in his locker too.

Carbery has shown the kind of potential that saw Joe Schmidt – the greatest Irish coach of all time – back him with time off the bench in Soldier Field and in the Six Nations.

Carbery’s pace and ability to play in transition will suit Munster down to the ground in 2018/2019 and he will only develop playing outside of Conor Murray week on week. How will he go off the tee? I’ve seen him land some good conversions/penalties but is Carbery a high 70%/80% kicker? Again, that’s to be determined but as far as quality signings go, this is about as good as you can get inside Ireland right now.

It shows the kind of mentality and bollocks that you want from a guy with ambitions to start for Ireland long term.