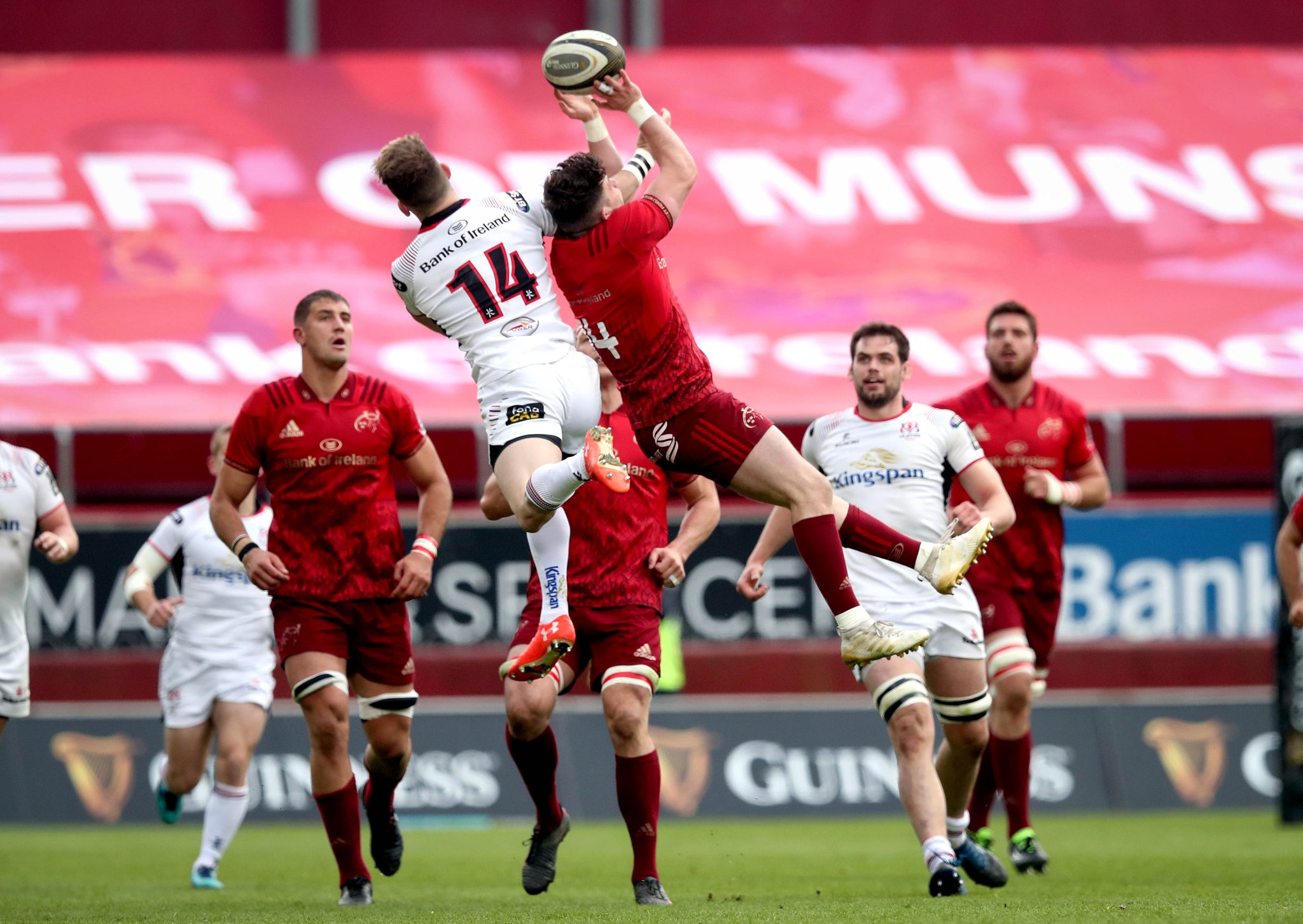 It seems easy on the terraces and on the couch at home. “There’s the space,” you think, watching in slow motion, “just get the ball there.”

It isn’t so easy on the pitch. If there’s one thing the last few weeks have taught me it’s that coaching attack is the hardest gig in the professional game because there are so many disparate moving parts. In defence, it’s slightly easier – still complex, of course – because you’re using a different part of your mentality. Defence is about destroying things and attack about creating them. Defending allows you to be singular in a lot of ways because, most of the time, the target is in front of you and if you have a system in place, you’ll know where you have to stand, who you have to smash and where you have to go after because the opposition will tell you with their actions.

Attack – good attack – needs multiple correct decisions from the ruck to the first receiver, and then beyond in sequence. If there’s a bad decision, or a bad pass execution, OR a badly timed running line anywhere along the chain the attack can fall apart as the defence reacts to the picture you put in front of them. The very best attack in rugby – be it off of the set-piece or on a multiphase play –  is a tactical Rube Goldberg Machine of good decisions, good handling and good running lines.

Of course, that doesn’t take into account the x-factors in any game that can affect your attack – cardio performance and anxiety – but it does give you an overview of what good attacking is built on. At many points this season, I’ve seen criticism spring up of Felix Jones in the aftermath of any Munster defeat this season but the raw statistics are all positive for Jones influence on Munster’s attack.

We are dipping slightly in overall points scored – 568 points scored this year compared to 602 points last year – but I think that has a lot to do with our main kickers being outside the top 20 for accuracy in the PRO14. Ian Keatley is currently at 75% for the season (24th out of 38 recorded kickers) with 39 good attempts from 52 attempts and with 29 out of 41 conversion attempts. JJ Hanrahan is on 64% although that will be slightly higher after round 21. For comparison’s sake, last season Tyler Bleyendaal lead the charts with 62 successful conversions and penalties.

So, for me, I think the idea that Munster’s attack has regressed this season is a little far off the mark and, when you consider that we’ve been missing key players like Bleyendaal, Taute and Farrell for large stretches, I think we’ve done quite well.

So when I look at the Ulster game and see the key attacking moments, I don’t see a disaster or a clatter of blown lines – I see a side that are creating chances but also a side that are a hair off where they need to be at key moments.

This looks like a catastrophic error from the first receiver, doesn’t it? I’m not so sure on that. JJ’s error in all of this was not hanging onto the ball once his passing options collapsed but let’s have a look at what Munster were targeting on this phase, which came about in the direct aftermath of a kick transition attack from Fitzgerald.

Munster were going after this space here; 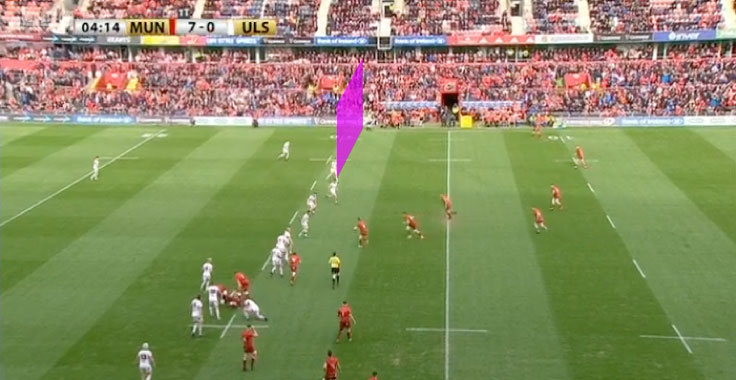 The conundrum for Munster was – do they go after this space in on this phase or the next one? The key players in this movement are JJ Hanrahan, Gerbrandt Grobler and Dan Goggin. 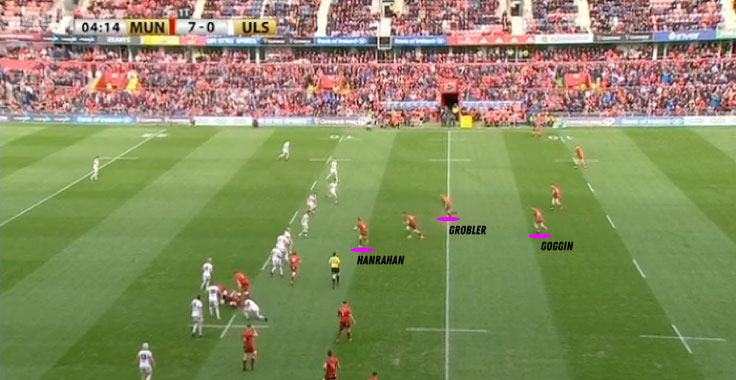 I think we didn’t have clarity when the ball came back off the ruck and that lead to a miscommunication and a turnover. We needed a definitive call on this attack and this looks like a classic case of everyone having different ideas on this play – basically, there wasn’t clarity on whether we were attacking now or in one phase time.

If we were going after the space on the initial phase, then it would have looked something like this; 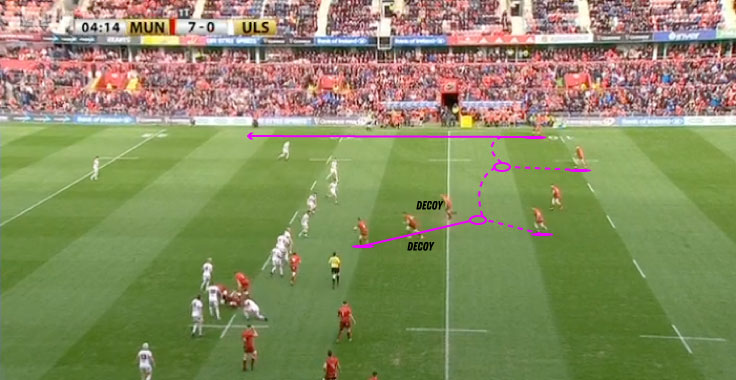 Grobler and O’Callaghan would have acted as decoys for JJ to thread the ball to Goggin, who would come around the corner onto the isolated Ulster edge defence where he could release Arnold, Sweetnam or Fitzgerald into space.

If that was the plan, I think Goggin was a little too deep when JJ went to release the ball. Hanrahan moved across O’Callaghan to make this play so by the time it came to pass, he only had two options and if Goggin wanted to be one of them, then he had to be closer to the ball than he was here.

I’d have liked Goggin to be a good four or five metres further forward to make this a viable play option to attack that edge space on this phase. That’s why I think Goggin assumed that he was a clean out option on this play.

Basically, Goggin was expecting that he was a clean out component on this phase so that Munster could attack the edge space on the next phase. 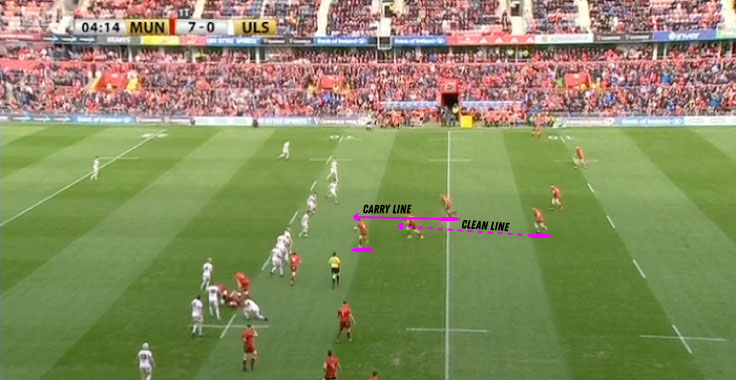 If so, Goggin’s spacing would make sense but Grobler’s actions on his running line wouldn’t.

A one phase Munster strike for that space would look like this; 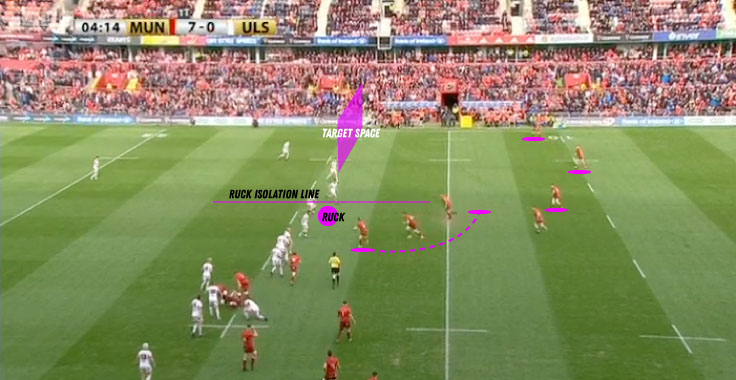 Grobler would hit the ball up, Goggin would pinch in to clean him out with O’Callaghan coming back to assist, Hanrahan would float around the corner and Hart would service the ruck. Munster would then – ideally – be looking at having Hanrahan attacking the Ulster edge with Arnold, Fitzgerald and Nash compacted in the 15m tram.

Both were good options but we were able to use neither.

I think JJ was going to hit Goggin but saw he was too far back and then went to bail out to Grobler to reset the play. He then got disrupted by Reidy and the ball spilled free.

Look at Hanrahan’s first pass load that he feints out on;

That was the one that I think he meant to send to Goggin. Grobler is running a decoy line here and, for me, I’d have liked him to look a little more active even if he was a clear decoy on this play. Little things like this get sharpened up with time on the field together in game scenarios so it’s hard to pin the blame on Hanrahan, Grobler or Goggin for this micro-moment in the game. Was there a clear shout on what the play was here? I don’t know. But going on what I saw here, I can see a malfunction and a frustrating one – we had made the space and just needed to execute.

It’s an illustration on the need for clarity, communication and “trimming the fat” off any set play, whether it’s off the set piece or in open play like this. What is “trimming the fat”? It’s asking yourself if you’re as flat as you possibly can be to the gain line to make an attack work, or if you’re releasing the ball a fraction of a second too early, or if you’re keeping your depth on a strike play, or if you’re selling the opposition that you’re a viable option even if you’re probably not.

It’s easy to talk about from the couch or terraces but for players, it can only develop with time on the pitch against live opposition looking to wreck you.

When I see Munster’s attack, I see small areas of fat that can be trimmed to take advantage of the space we’re undoubtedly creating. This was true in Bordeaux and it’s true here. You’d never know when that fat will fall off – hopefully over the next three weeks.

I’ll be looking at Munster’s attack in more detail tomorrow as well as expanding on some of the points I’ve raised here.