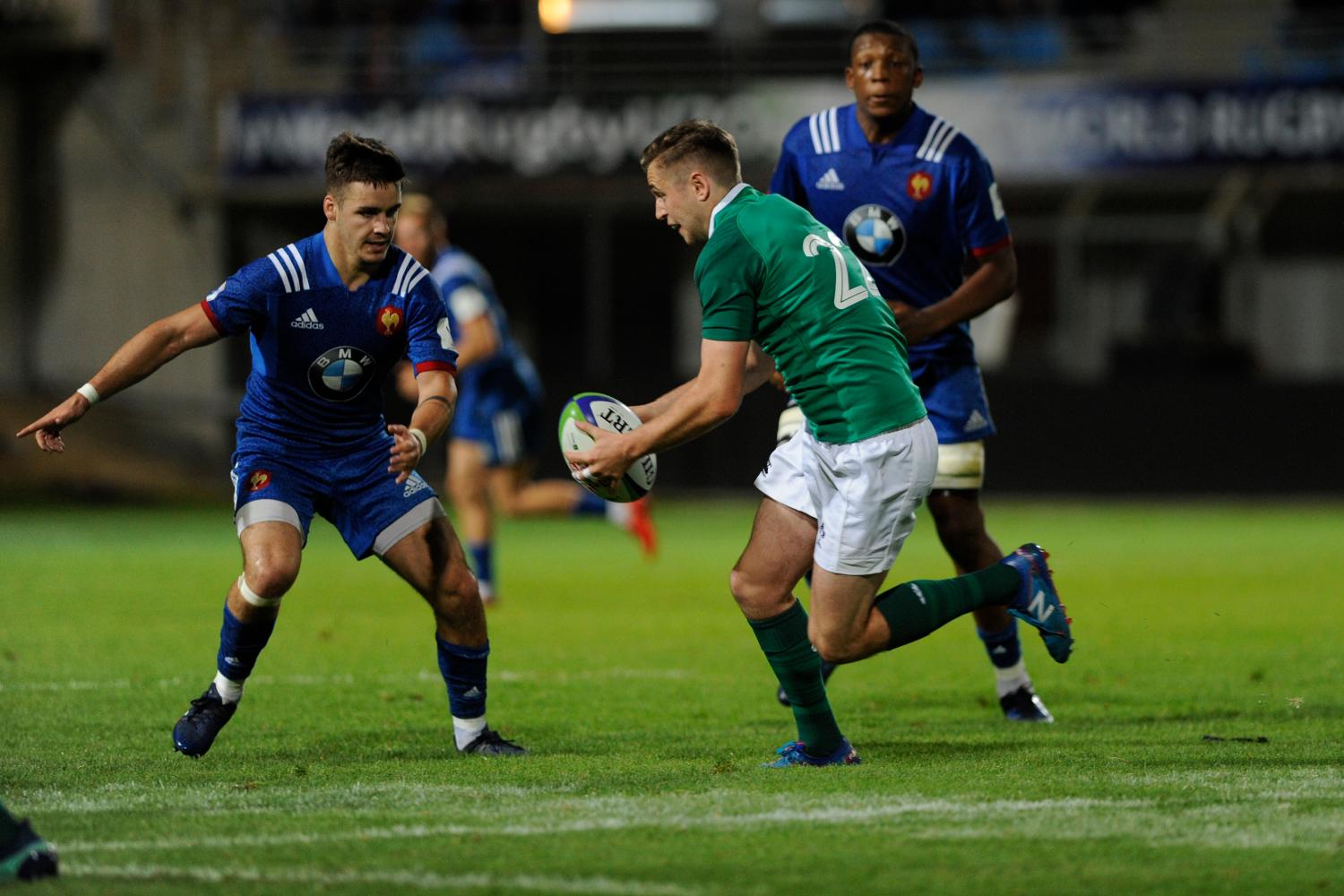 If you’ve read TRK Premium for any extended period of time, you’ll know the detail, physical duress and IQ that has to go into successful attacking and defensive maul play. That level of difficulty is increased when you go back through the age grades and that was quite apparent during the U20 Six Nations – Ireland struggled badly on both sides of the maul with regularity.

As with anything in this game, the longer your drill the better you will usually become and the Ireland u20s have certainly come a long way since the Spring. They aren’t a complete mauling package – as I’ll show – but they’ve improved hugely in the build-up to this Championship. They may have lost both of their opening games but they’ll take a lot of positives from the work of their forwards, especially in the maul.

A lot of Ireland’s success against the man for man larger packs they’ve faced to date has been their ability to manipulate their opponents initial set up. Ireland use their initial maul defenders to rotate the opposition so we can get our ball killer – Caelan Doris – in on the second wave on the exposed ball carrier.

Let’s have a look at how that works.

First, look at how Doris stays as a cover defender on the initial engagement, despite being one of Ireland’s strongest defenders. There are two elements to that. The first is the obvious one – he’s guarding against a break from the back of the maul and, as Ireland’s dominant physical presence in the pack, he’s the guy you’d want against a side as dynamic as France. The second part is the role Doris takes as the maul develops as a second wave defender.

Ireland’s initial defensive engagement is an action designed to stuff and then rotate the French attack.

This is a common enough defensive ploy against a big, low IQ maul and it works as a two-part defensive play in this instance. The first rotation takes the break off the back into the openside away from the French and forces any break to go down the blindside where it’s easier to defend thanks to the best defender in the planet, the touchline.

Once Doris sees the openside break taken away, he can move into position for the second part of the defensive action – hitting the exposed flank.

When France feel an open angle to drive forward, that naturally elongates and disrupts their maul shape and that is something that Doris can use his low-gear power to attack. Let’s see how it plays out;

Doris is able to get hands on the ball carrier once the jagged French alignment hits the reset Irish maul defence and, once he has hands-on, the maul is only ending one way.

Ireland would use this same technique a few times and the French found it difficult to combat.

Ireland stuff and rotate towards the blindside, like last time, and then Doris floats around to the exposed front of the French maul.

His impact here is even more pronounced, as the French front collapses away from him leaving him right next to the ball carrier while Ireland have insurance on the left and right side of the maul in Barron and Duggan.

That disruption forces a spill from the French a few seconds later. All the same defensive techniques are there – Ireland stuff, rotate, attack in the second wave and then continue to peel around in a pincer movement until they suffocate France.

Even when Ireland didn’t get an optimal start – in the below instance, getting distracted by a non-call on a fake throw – we were able to retain our composure.

After our initial sack attempt fails, we waited for France to make a move which is an OK play here, but it allowed them to accumulate numbers and gain good initial momentum. Once again, Ireland were able to stick to the plan of rotating the French to expose them.

We were able to pull France towards the touchline with an openside angle – which isn’t optimal – but we were able to peel away the entire drive shaft of the maul itself, which allowed Doris to kill it stone dead in the second wave. 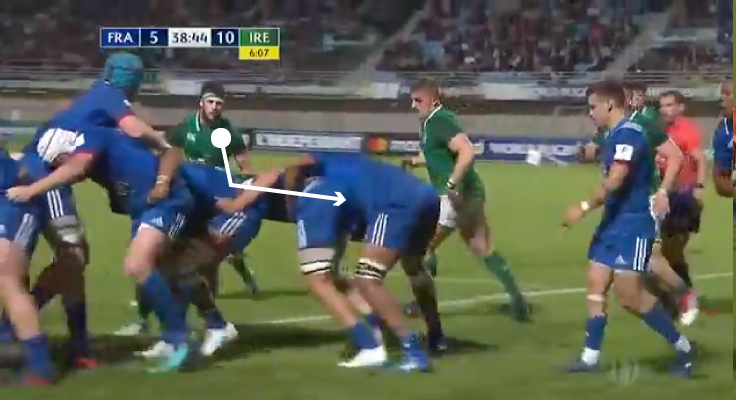 Doris is smart too, though. He doesn’t just step in on the ball carrier and risk a penalty. He staggers his entry, hits the front and then chews his way through onto the ball carrier for the sack.

That good work continued against South Africa on Sunday by using similar principles.

You can see Ireland are looking to rotate and hold the Baby Boks, but the short length of their build makes it difficult to open up a clean shot at the carrier. Doris is in the same second wave position, guarding the big South African breakers and he’s waiting for a spot to open up.

When Doris is sure that the break chance is gone, he moves to the front with a solid hit, draws a Bok defender out and allows Daly to sack the maul for a minimal gain.

Ireland rotated the short South African maul around the drain their energy, make them move the ball under pressure and draw defenders out of position to allow the ball carrier to get sacked.

A few minutes earlier, Ireland did a great job of stuffing South African in a difficult field position just inside their 22. Again – Ireland work smart.

In this spot, Ireland can’t risk fully rotating the maul around because of the threat of a breakaway that’s as relatively close to the try line as this is. They get a good lateral shove on the front of the maul that collapses the “wall” defenders and exposes the ball carrier for Doris to attack with his wingspan.

When we hit this position, South Africa are in trouble. 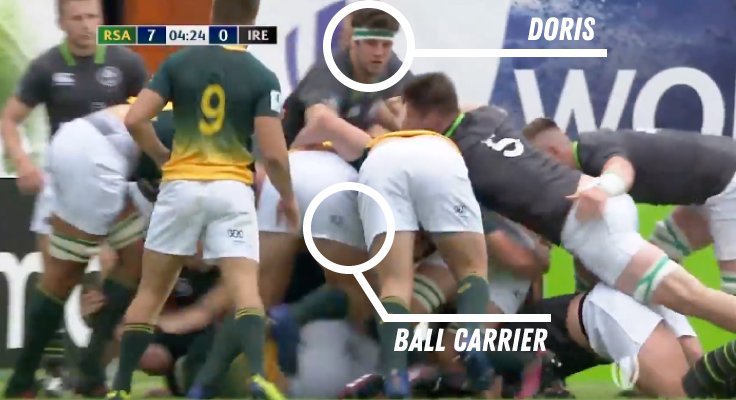 Doris’ wing span will let him come over the top onto the ball carrier and, because Ireland have ground out the “front’ of the maul, he can attack the ball directly with little trouble.

Ireland’s work wasn’t flawless by any means, and we lost ground in the second half on one key maul that lead to a try but over both games, it has been technical, intelligent and made good use of second wave defence to take out bigger opposition.

We’ll need all that and more against a very strong Georgia side.