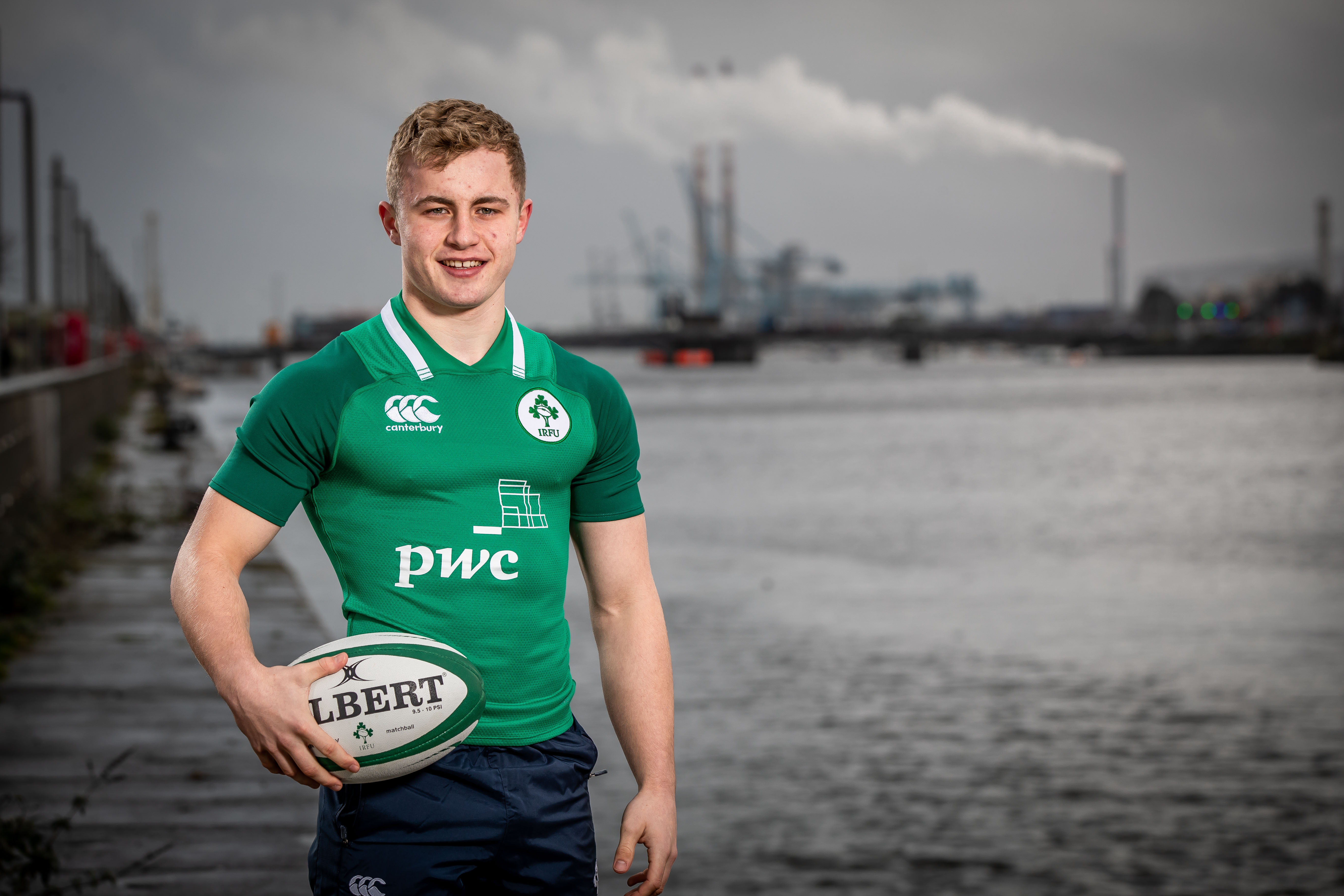 There was one name trending on Irish Twitter during last Friday night’s Ireland u20 win over France and subsequent Six Nations Championship win – Craig Casey.

I know Twitter tailors your trends to your interests but, to put it in perspective, the only other guys I’ve seen trending during games are the likes of Peter O’Mahony, Johnny Sexton, Jacob Stockdale and the like.

That’s the impact Craig Casey had on Friday night. Sure, having a classic David vs Goliath moment in the most literal sense I’ve seen on a rugby field for some time helped with that attention but believe me when I tell you that Casey’s performance was much more than a Lionhearted tackle on Jordan Joseph.

It was a performance that electrified Musgrave Park and showed massive potential for the player that Casey might yet become.

I first saw Casey playing for ArdScoil back in the Munster Senior Cup and even then, you could see he had something about him. An obvious leader, rock-solid basics, an excellent goal kicker and that bit of X-Factor around the field that marks out young players from the pack. He was taken into the Munster Academy straight out of school – not something that happens everyone – and it was one of the least surprising additions in a few years.

The first thing you notice about Casey is his height – 5’5″ – and how unique that height profile is in the modern game, even for scrumhalves. For comparison in the Munster squad, Duncan Williams and James Hart are around 5’10” and Conor Murray is 6’2″. Aaron Smith is 5’7″. So Craig Casey’s 5’5″ is pretty notable in the modern game and it comes with its pros and cons. The cons are on the defensive side of the ball mainly. The tackle on Joseph was an outstanding bit of defensive work but I wouldn’t want Casey having to involve himself too many times against lads of that size in every game he plays, as much as I’m sure he’d relish throwing himself into those collisions.

As for the positives, there are many. Scrumhalf is one of the few positions where height isn’t a factor in determining the success of a player in 2019, given the trends we’re seeing develop.

When it comes to the factors that DO determine the success of a scrumhalf as the game rolls into the 2020s, Craig Casey has them in spades.

Successful scrumhalves need to have five qualities. They are;

After looking at Casey’s performance against England and France, I think he’s got four of the five.

Yes, it’s Under 20 level and that doesn’t automatically scale up to even PRO14 level let alone the Test arena but it does give you performance markers when you compare players to their peers in other elite nations. In that context, Casey is playing remarkably well.

His kicking is the one thing that’s a question mark for me at the moment in that I don’t really see Casey as a kicking scrumhalf and he isn’t used in that manner by Ireland during this Six Nations. On the negative side of the ledger, he had one poor exit against France that leads to a try last week;

The kick looks to be a last minute adjustment to avoid being charged down rather than poor mechanics on Casey’s part.

Here’s a better exit against England.

It’s left-footed, he gets a good strong plant on his right and he’s got a small kicking “footprint” so it’s tough to read and charge down in time. He gets decent distance on this exit.

Here’s an even better box kick;

The same things are present as the exit in the previous GIF but his accuracy on this box kick is pretty good. He makes around 30m on the kick (a little too far, in my opinion) but the ball is in the air for exactly four seconds, which gives Wren all the time he needs to get a shot in.

His tactical kicking during phase play is good too, as this nicely angled kick and put France under real exit pressure.

Until I see more of Casey’s kicking at the top level, I’d keep it as a question mark for now but the signs are good. When we judge how Craig Casey operates as a scrumhalf though, we can’t ignore his key ability – the sheer pace and quality of his passing.

The speed and accuracy of Casey’s passing are astonishingly good. The speed and range he gets from the base of the ruck influences much of the rest of Casey’s game – how he moves ruck to ruck and how he breaks when he chooses to do so.

I’ve slowed this ball down by 50% to give you an impression of the flight and accuracy.

There’s not one ounce of fat on this pass and it’s right in the sweet spot for Tierney to catch – outside shoulder and chest level from just over 10m away.

Here it is at regular speed;

Casey’s pass – the accuracy and pace of it – puts Tierney-Martin outside the French “C” defender as he moves onto the ball, which creates the angle for the tip on to Penny.

This pass to Hodnett off a pressurised is another quality pass. It’s around 15m, with a lightning fast wind up/release and it’s right in the sweet spot.

Hodnett can move forward onto the ball and barely has to check his line to take this long range pass. He makes good ground into the space the pass afforded him.

The camera angle on this pass to Turner doesn’t do it justice in the slightest.

He gets enough height to bypass Flannery completely while still hitting Turner in stride from 15m+ away and without crabbing from the ruck to release the pass. He’s got a separation step away from the ruck as he winds up and that’s it.

And these aren’t isolated passes. After watching both home games against France and England I counted two passes that I’d class as “poor” in the same manner that I assessed Conor Murray a few weeks back. Casey is remarkably consistent from ruck to ruck, pass to pass.

The pace, range and accuracy that Casey gets on his passing puts him an elite range for his age group and hints at massive potential as he progresses through the ranks. His pass is so good that it allows him extra time to assess his options at the ruck in a way that would critically harm other scrumhalves who don’t have his passing ability.

Watch his movement ruck to ruck and the tempo he generates with the pace and sharpness of his pass.

Four rucks, all sub-three seconds, and the French defence can’t sit still for a single phase. Casey follows his pass with a lovely direct support line and consistently scans the opposition fringe defence for opportunities to break.

Casey’s constant movement and the sheer width he gets on his pass with very little wind up creates space and angles for his outhalf and, subsequently, Ireland’s wider power carriers to work with. Casey’s pass to the ruck and smart support angles combined with the velocity and accuracy of his passing mean that Ireland u20s get extra width and range on their ball carrying structure – which goes some way to explaining why a generally smaller Irish pack has managed so much gainline success against the likes of England and Wales.

That’s before we get to Casey’s X-Factor – his acceleration, agility and stepping ability.

When you see Casey approach rucks, you can’t help but notice how he assesses the fringe defenders for breaking opportunities.

As he gets analysed by opposition coaches, this tendency will be important for him to keep on certain phases. Casey’s agility around the base of the ruck is such that the opposition have to structure their defence tightly in the A/B channel, while their outside defence has to watch for the width his passes generate.

If you have sloppy pillar defence, Casey is really good at taking you for a walk and then cutting back inside.

He sells the French A/B defenders on a wide pass to Wren or Hodnett – which they have to worry about going on what they’ve seen before and during the game – and then beats them with an angled cut. He’s not even selling it with a plant. That means there’s no visual cue for the defenders to react to and Casey’s acceleration takes him away from Joseph in the second line.

When you look at Casey working as a kick transition runner, you can see his full repertoire of running skills.

The initial angle in-field, the step back, the pass fake, the ball in two hands, the acceleration through the gap, the hand-off, the second go off the ground (with a release) and the power step on his opposite number before the perfect offload – this is top drawer stuff.

It’s an outstanding transition attack by a talented, agile runner. Combine that with his solid kicking and outstanding passing game and you have a serious scrumhalf prospect.

There are a lot of obstacles along the way between the potential of the here and now and deliverance of that potential on the world stage. Injury, rather than some notional idea of being “blocked” by players further up the depth chart, is the biggest killer for any talented prospect’s career and that’s something that Casey will have to navigate.

He’s young yet – just 19 – so he’s got a lot of time to left to develop. When he does, I truly believe that if he can stay fit and take his opportunities when presented that Casey has the potential to be a very special player for Munster and Ireland.