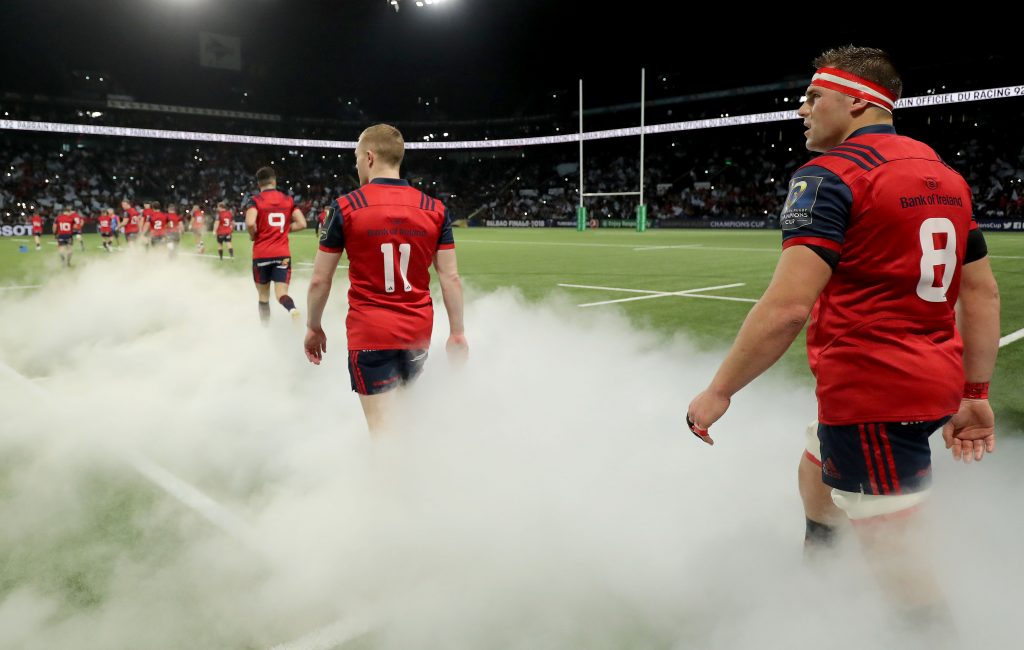 If I offered you a plain cardboard box with Losing Bonus Point written on the outside of it and then pointed to a purple, glittery mystery box that either contained a 5-0 bonus point win or a 0-5 bonus point loss, which would you pick?

I suppose it depends, doesn’t it? At differing points in Sunday’s game, it looked like Munster might be equally capable of shipping any one of those results, such was the topsy-turvy nature of this absorbing clash in the stadium/soundstage of the U-Arena.

Munster’s “that’ll do” scenario before the game was a losing bonus point above all else and with Racing 92 pummelling the Munster 5m line with two minutes left before winning a penalty under the posts, there are few of a Munster persuasion that wouldn’t be grasping for that plain cardboard box and the first ticket out of Paris.

Racing’s decision to kick that penalty, rather than grind for the bonus point try that would put them in charge of this pool is one that might become more important next week but that’s for them to agonise about. For Munster, it was a job done albeit with some caveats.

The facts show us that Munster lead by two points with 7 minutes on the clock and, from that position, should probably have seen out the game.

Two big moments changed that – the first was Jack O’Donogue being adjusted to have played this ball on the ground.

It looks tight – Munster were certainly arguing that Jack O’Donoghue was entitled to contest this all the way down but Racing’s excellent targeting of that channel on restarts for much of the game was going to provide a big moment and it did here. Donnacha Ryan got the reward for his excellent challenge and Racing kicked the penalty to put them a point ahead.

From there, Munster were still more than capable of going down the field and picking up a kickable penalty or more – it was that kind of game – but instead, Donnacha Ryan would force another key moment.

A speculative kick down the middle of the field forced Ian Keatley to scurry backwards before – who else – Donnacha Ryan’s chase turned him right instead of left and forced a tired, sliced kick that handled Racing the ball in Munster’s 22.

From there, Racing powered to the 5m line with real energy and Jean Kleyn killed it stone dead.

That decision gave Racing a choice to secure the game or take the pool by the scruff of the neck – they chose the former and Munster won’t have been too disappointed. There exists a parallel universe where Racing kicked to the corner and mauled over for a bonus point try and most people of a Munster persuasion are pretty happy that they don’t live in that universe today.

That said, the four-point scoreboard loss and the accompanying bonus point will seem like a silver medal on review.

Munster had Racing 92 dead to rights at times and looked like they had the wide passing game (both forwards and backs) to crack them. That’ll be the frustrating thing.

Munster rarely took the ball around the fringes. Almost every part of Munster’s work in attack was based on moving Racing around the middle of the field. When Munster did this with the right tempo, spaces appeared.

The same can be said for Munster’s kicking game, which was used to gain ground without burning carries on a number of occasions.

It was efficient, for the most part, and seemed to have the last 20 minutes in mind on a flat, quick surface.

It didn’t all go to plan – of course. Three long-range penalties missed put a different picture on the endgame. That decision making to go for the posts on those occasions came under some scrutiny post game but these were near perfect kicking conditions. Where else can you get the perfect mix of near flawlessly flat and consistent kicking surface and an indoor arena providing no wind whatsoever? I think you have to back your kickers in this particular scenario – especially when Munster had a comfortable enough requirement in this game from a match point POV. The missed nine points off the tee, with six of those ratting off the post, would be costly.

Munster will know that they left the win behind them here but they can’t dwell on it. Castres beckon, as do the quarter-finals.

The equation for next week is simple – win and Munster qualify for the quarter-finals, regardless of what happens in Welford Road due to the head to head results over Racing. A bonus point win could see a home quarter-final depending on results elsewhere. I don’t think anyone of a Munster persuasion would have sniffed at that scenario if you’d offered them this scenario back in August.

Beat Castres at home for a quarter-final spot? All that’s left to do is make it happen but we’re in the No Mistake Zone now. Time to make it happen.

As per usual, players are rated based on their time on the pitch (no rating if on less than 15 minutes bar extraordinary circumstances), if they were playing notably out of position, and on the overall curve of the team performance. Darren O’Shea, Duncan Williams and JJ Hanrahan were not rated due to not playing and being on the pitch less than 15 minutes respectively.

You don’t come within 7 minutes of beating this season’s iteration of Racing 92 in Paris without most of your squad playing quite well.

I thought Simon Zebo and Ian Keatley had very decent games that featured some excellent moments alongside some key errors. That’s the burden that comes with creating things on a rugby pitch.

Keatley was instrumental in Munster’s tactical kicking and played an excellent role in stitching our wider game together. He’ll be disappointed with his tired exit in the build-up to the last five minutes but played well outside of that.

Simon Zebo stepped in at first receiver on a number of occasions, kicked well but had a few loose moments that ended up being costly down the line – the kick taken into touch right before halftime being one of them. His quick hands in the build-up to the Earls try were crucial.

Andrew Conway had another busy day under the high ball that just fell short of the killer final product he’s capable of. Another decent outing.

Rory Scannell had a mixed game. Some defensive errors marred his day but he showed his usual bottle and impact with ball in hand, as well as stitching some nice wider plays together. Far from his best, but decent all the same.

Peter O’Mahony had a decent game but didn’t hit the heights he’s capable of.

If the win was going to come here, it’d be built on the work of these guys.

Jean Kleyn and Chris Cloete got through an absolute mountain of work around the ruck and in contact on both sides of the ball. Two quality operators.

Jack O’Donoghue made a big impact when he came off the bench and looked to be a guy who has dialled into exactly what his game should be. His lineout, maul and defensive work have come in broad strides this season and this game was the perfect example.

CJ Stander had another vastly industrious outing and showed off the subtle aspects of his game that have long been desired from elsewhere. He trucked it up, he feinted, he passed – all under the usual heavy duress that has become the norm for him.

Conor Murray was elite. Again. His long-range kick attempts (one from two) were another string to his ever-increasing bow. Him winning the game with that 73rd-minute bomb would have been almost too perfect and hinted at a guy that may yet become even better if that were possible.

Chris Farrell looked like a real quality operator here and, one poor pass to Earls aside had a powerful impact for the full 80 minutes.

And what more can I say about Keith Earls? He’s getting better with every passing month. Some of his work from yesterday’s game would stand up to scrutiny at the highest levels of the game. His finish for his try was sublime, but his work in the build-up was as good in turning a poor pass from Simon Zebo into a try-scoring opportunity. Who’s the man?

I’ll have GIF Analysis of this game all week along with the build-up to Castres on TRK Premium, which you can get for as little as €2 a month.