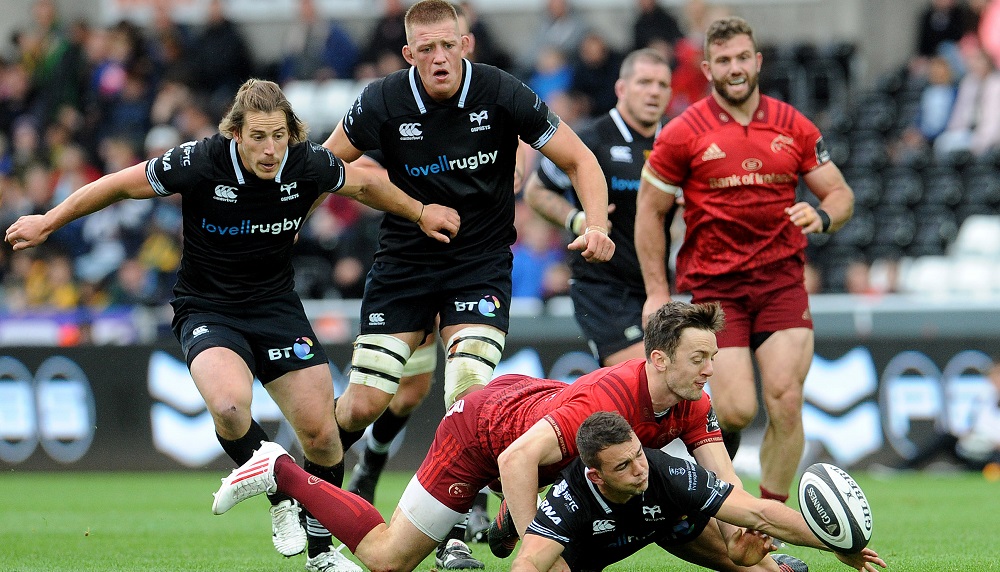 It felt that way live, but looking at the numbers other than the scoreboard, we can see it was much more comfortable than it might have seemed. A lot of the discomfort Munster fans felt came down to uncharacteristic profligacy off the tee and boot from Tyler Bleyendaal – and I’ll get to that – but when we look at the metrics that show the mechanics of a game, we can see how comfortable Munster were.

The main metric I use to look at whether Munster were comfortable in game is, as you’ll know by now, the Combined Forward Carries/Metres table.

As metrics go, it judges the main man on man contest of the forward packs in phase play and really illustrates who’s been dominant on the ball, if not the set piece.

Let’s have a look at the numbers for yesterday;

That’s a pretty stark illustration of how the forward exchanges developed and it should be quite concerning for the Ospreys, who started with players like Tipuric, Lydiate, Davies and King. Those numbers paint a story of Ospreys’ forwards failing to collectively dominate their opposite number in contact which should be all the more concerning for them considering the Ospreys had more of the ball.

Last season, Munster dominated the Ospreys on their ball and punished them off the set piece. We were carrying the ball more, and further when we did. On Saturday, it was broadly similar – the Ospreys only made 34 forward carries for 35 metres when they had 52% possession. Same old story.

I was genuinely surprised at the Ospreys opening 40 minutes. I’d expected a measured version of the pace and flat gain line game they brought in this fixture last season. Instead, there was nothing. They fell off tackles, kicked the ball away needlessly and didn’t show up in the set piece.

Munster should have had this game wrapped up at half time. We were dominant in contact, displayed excellent attacking tendencies and left 8 points on the tee that would have made Ospreys job all but impossible.

The second half was made a lot messier than it needed to be by an absolutely torrential downpour that acted as a leveller. The Ospreys still weren’t getting any momentum in the carry or in the set piece – the maul was a particular dead end for them – but they did manage to generate some momentum by bringing the excellent Jeff Hassler in off his wing almost like an NFL running back. His burst running made him a difficult man to stop in the monsoon conditions and he made more than a few breaks around the tail of the lineout that were relatively effective for the Ospreys.

The problem always came with what happened after that break came, as far as the Ospreys were concerned.

Even though Munster fell off a bit in the second half – a lot of that comes down to the conditions and the absolute roasting the Ospreys would have got at half time – we were still fairly comfortable. There was scoreboard anxiety, sure, but phase for phase I thought we were defending quite well in the conditions.

Outside of the Ospreys try in the first half – a direct result of two defensive miscalculations off maul defence – they never really threatened our 5m line with any regularity or purpose. Our defensive movement from ruck to ruck was very, very good as was our ability to stop any offensive surges in midfield; two 110kg midfielders will give you that.

That kind of defensive confidence was paramount to leaning back on the Ospreys in the last quarter where we did enough to put the game beyond a wet weather penalty or freak try.

As comfortable as we were, there were a fair few issues to be worked on this week. Some of our handling – even with the weather – was a bit sloppy and I felt we could have managed the third quarter a bit better than we did from a tactical perspective. Overall, yes, we played the game in the right area of the field defensively but better accuracy could well have seen us pick up a bonus point win here.

Overall, it was a deceptive game. Close on the scoreboard until the last 5 minutes but not much anywhere else. As first “real” tests go, I’d mark this as a B-.

Good – not great – but you can see just how good we could be with the likes of Murray, O’Mahony, Cloete, Earls and Stander to plug back into the side.

An off day for The General. Normally, he’s quite reliable off the tee but his cross hairs didn’t right themselves after the Benetton game and as a result, we were way less comfortable than we should have been. Throw in a few uncharacteristic tactical kicking errors and a few bad restarts and you have a poor enough day’s work. As the kicker, you simply have to make your kicks in away games like this and it could have cost us. A 57% return for a kicker of Bleyendaal’s quality isn’t good enough, but he’ll know that.

On the positive side of the ledger, he did run some lovely plays with the ball in hand and was intelligent with his intent, if not always his execution. His work with Wootton in the surge of the last 10 minutes was a particular highlight.

He’ll be well aware of the need to pull his work with the boot around though, and quickly.

A very decent evening’s work for these lads;

Billy Holland was the epitome of reliability. Nothing spectacular – and a few iffy line out calls in wet conditions – but he’s such a calming and technical presence in a match day squad. Invaluable.

I thought Tommy O’Donnell had a good, honest game. He’s just a hard worker on the pitch and that’s what you want from a senior player in a game like this. A decent outing for a guy who’s an excellent, hard nosed backrow grafter.

Andrew Conway wasn’t at his best here but that came down to the conditions more than anything else. He was still very solid, especially when it came to his defensive tracking.

Rory Scannell had a very decent cameo when he came on. Didn’t have much attacking ball to work with but made a number of heavy hits and made one vital choke tackle that stemmed some decent Ospreys momentum.

If you’d said in May – even in August – that Liam “Boomer” O’Connor would start (and impress) in the first three games of the season, you’d have surprised a lot of people. That he managed to do just that and look more than the part while doing so shows the level of performance that this young lad has brought. He was excellent in the scrum here and showed some nice touches around the field. His lineout lifting and timing gets better with every game he plays in. Impressive.

Stephen Archer has another great outing here too. He’s looking trimmer, meaner and, almost importantly, he’s piling lads in the scrum. If he can stay fit and build on this initial form, the #3 jersey discussion might not be as straight forward as we thought.

Niall Scannell came on with a point to prove after a disappointing cameo last week. Our hooker depth is such that no one – not even a future captain like Niall Scannell – can afford a drop in level. Here, he came on and made an instant impact. He had one blown lineout, sure, but other than that he was powerful, athletic and a real positive impact around the field. Impressive.

Sean O’Connor is another unheralded young lad that has looked outstanding in the last three games. Seriously – O’Connor looked right at home against some physical opposition here and was an excellent lineout option, carrier and tight operator. I’m really looking forward to seeing how he progresses this season, on the blindside and in the second row.

Jack O’Donoghue needed a big start to the season and he got it. Everything he’s doing just has more “pop” to it than last season. Maybe it’s the physical development of another preseason, maybe it’s a young lad with a major point to prove – either way, Munster are the beneficiaries. He was excellent in contact, a dominant ruck presence, really good at the base of the scrum and a seriously athletic lineout option.

For a guy who many wrote off as the third string scrumhalf this season, Duncan Williams has certainly set the cat amongst the pigeons. He was excellent here, solid on exits, made good decisions and constantly challenged the Ospreys fringe defence. The groaners in the crowd will never admit it, but he’s been our stand out half back so far this season. Excellent.

Jaco Taute had the kind of game that showed his quality as a hammer and a scalpel. He was a brick wall in defence, a bulldozer on wide rucks and had the passing ability to make space for those around him. It’s hard to imagine Munster without him, that’s how impressive he’s been since he signed this time last season.

Chris Farrell showed – again – why he was among the best outside centres in the Top14 last season. His pace, power, step and passing ability are top notch and the more game time he gets, the better our attack will become. He was quality here and, one misjudged shoot aside, looked every inch an international in waiting. Very, very impressive.

And finally, Jean Kleyn. What a boss this guy is becoming. His try was superb in its inevitability; when he got the ball 5m out, you just knew that he was going over the line one way or the other. That’s an invaluable quality. His work in the maul was devastating on both sides of the ball and his grunt in the scrum could be seen surging on the tighthead side. Right now, the discussion is simple; who partners Jean Kleyn in the Champion’s Cup? On TRK Premium this week, I’ll be assessing Munster’s attacking development over the last three games, examining our work on maul defence in this game, and scouting Glasgow ahead of Nigglefest 2018 next week. All that (and more) can be found by subscribing as a Premium member on Patreon – link here – for as little as $2 a month.