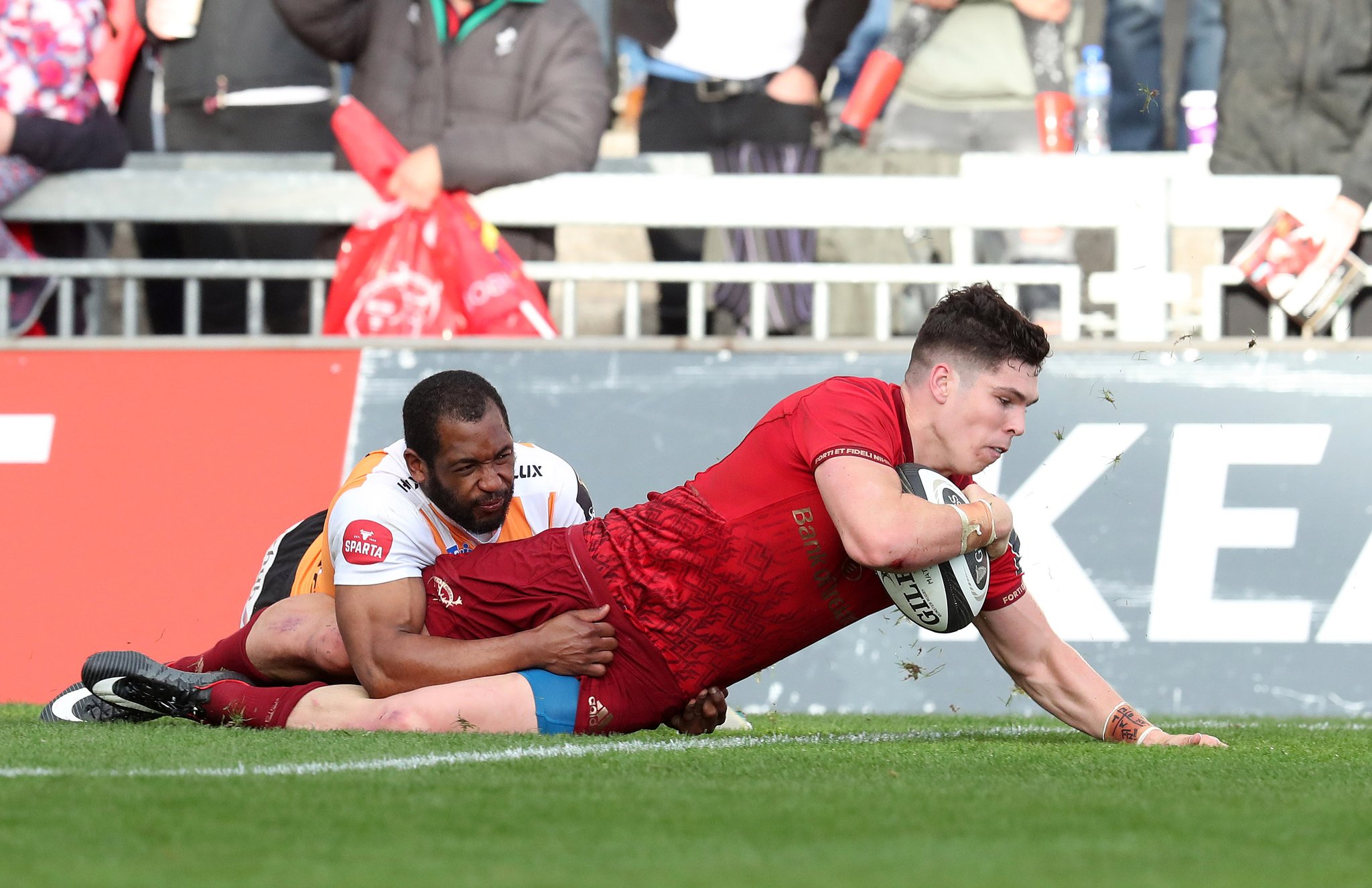 Long story short, Munster vaporised the Cheetahs 8 tries to 2 and enjoyed an ultra comfortable run out against a team that looked like they were set up to play a slightly different sport.

Short story long? Let’s get to that.

The usual suspects won’t be able to resist spoofing about the Cheetahs on the back of this result. Unfortunately, they’ll have to be indulged until the Bloemfontein side can settle into who they are as a team in the Northern Hemisphere. There are extenuating circumstances, of course, for this underperformance. We have to take into account that they had another side playing in South Africa on Saturday AND that they already have a full Super Rugby season under their belts already. They are huge factors. Rugby is all about the context of the opposition – how they make you attack and defend – and they will need to adapt to the rigours and challenges of this league. That’ll come, but only with time.

Whatever they do, they’ll have to find a tighter style of play when they come to a place like Thomond Park. The Cheetahs were looser than a wizard’s sleeve at times and when Munster took them through the phases they had very little for us in the tight exchanges. Those lost collisions on attack and defence meant they spent most of the game marching backwards on our ball or theirs. You won’t win in Thomond Park playing like that.

In any game of rugby, you need your forwards winning the physical battle and Munster were the decisive winners here in the maul, scrum and in the phase exchanges.

We can see this dominance play out in the combined forward carry numbers;

These are based off preliminary stats but I don’t think they’re far off the reality. Using this as a guide, we can see that – in general – the Cheetahs just couldn’t get any kind of forward momentum to threaten Munster on anything other than the loosest of turnover ball. Rugby is hard enough to play when you’re going forward but it’s almost impossible to play going backwards.

That proved to be the case for the Cheetahs and they were deservedly beaten out the gate.

For Munster, ball wasn’t a problem. Our half backs had all the quality ball they could have hoped for pregame and we made the most of it, for the most part. I mean, you can’t sniff too hard at 8 tries regardless of the opposition, but what stood out to me was the variation behind our tries. We ran in tries from turnover ball, off dismantled scrums, off mauls and on phase play. We showed the kind of adventure and ball handling prowess that we hinted at against Benetton in Cork – almost to our detriment at times. We blew the Cheetahs out of the water in the first 40 but I almost got the feeling that we were too excited at times and took a little too much out of the ball when simplicity was doing the job so well.

Our fringe carrying made constant ground and when we brought the Cheetahs through the phases, gaps appeared again and again; they just couldn’t live with our tempo on either side of the ball.

In the second half, we tightened right up; albeit after a ropey opening 5 minutes where we conceded a sloppy turnover try straight from a restart. When we went to our A game, the tries just rolled in. We attacked smartly off our maul possession, kept the ball alive whenever possible and kicked with a constant intent to cause harm in their half of the field.

Everything we did had a ruthless purpose that we seemed to lack at times last season. I think we need to get a proper balance between our new attacking instincts and the reliable systems that we know work for us.

As a spectacle, this game wasn’t hugely competitive but it was an entertaining example of where our game might go this coming season. There are bigger challenges ahead, of course, but the glimpse we saw of our new “A game” hinted at the expanded attack we’ve been crying out for.

An eight try win doesn’t come easy, and these guys certainly played their part with very decent performances. Some of the stand outs;

Liam O’Connor continued his excellent start to the season with some strong scrummaging. His game is developing but the basics look to be there for Boomer O’Connor.

Stephen Archer, too, had a good shift and he vaporised his man in the scrum on two or three occasions. A continuation of his decent start in Cork last week. Not all there yet, but much better.

James Hart came on for The Dunc and made a much better fist of his twenty minutes than he did against Benetton. He made good decisions, passed snappily enough and kicked well – no better than when he put Zebo away for a try off the back of a scrum. Much, much better.

Simon Zebo came on like a man with a point to prove and he did the business in his cameo – one try and one try saving track back.

Overall, all these guys played quite well and will have every reason to be reasonably pleased with their day’s work.

Jean Kleyn was just immense and continued to show us what we missed last season. Bar one whiffed offload, Kleyn was near faultless. Six lineout takes, one steal, some high impact carrying, another try; and the Lord of Destruction is just getting started.

Jack O’Donoghue continued his good work from Benetton with a dynamic game against highly mobile opposition. He blotted his copybook slightly with some needless penalties but he showed some lovely touches around the field and looked like the extra size he’s packed on is doing him good. Nice game.

Duncan Williams and Ian Keatley were absolutely superb. They managed the tempo of the game fantastically and directed our patterns extremely well. Sure, Williams had a few iffy passes and Keatley a few conversions he’d like back, but overall they both played with a confidence and swagger that showed two guys enjoying their game. Long may it continue.

Sean O’Connor played like a guy with 20+ Munster caps on just his second start. He’s still growing into his frame (quite literally) but what I’ve seen so far is a 21-year-old lad that’s making his tackles, carrying hard and hitting rucks like a train. He’s a bit rough around the edges with some aspects of the game at this level but he has all the tools to come good. Hugely encouraging.

Jaco Taute was really good. His freakish power in midfield will be a massive asset this season. Nothing sets the tempo like the Taute Train smashing guys up the middle. That said, he showed some subtle touches too with a few nice passes and lines.

Chris Farrell was massively effective here and had a number of big moments – his excellent try chief among them. His power, pace and eye for an offload will play a massive part in what we’re looking to do this season. Powerful Chris Farrell.

Darren Sweetnam had the kind of game that coaches just love. He hardly put a foot wrong and was the man with the killer pass for two of Wootton’s tries. His work in the second layer hints at the type of creative player he’s growing in to – his passing was outstanding and his kicking game was a constant threat. A super day’s work.

And finally, what can you say about Alexander Wootton’s 60 minutes? He was unplayable at times and, with his four tries, woke the whole of Munster to the talent that showed last season. Anyone who didn’t quite know who this kid was, certainly knows all about what he can do now. He carried for 127m, beat 5 defenders, threw 3 successful offloads and scored four finisher’s tries with the assured stride of a guy with four times his caps. This one will live long in the memory for more than just Alex and his family – this was a remarkable performance.

It’s like this – Wootton got a bonus point all on his own and, in this game alone, scored more tries than Connacht, Zebre, Benetton, the Kings and Cardiff have managed in their two games to date.