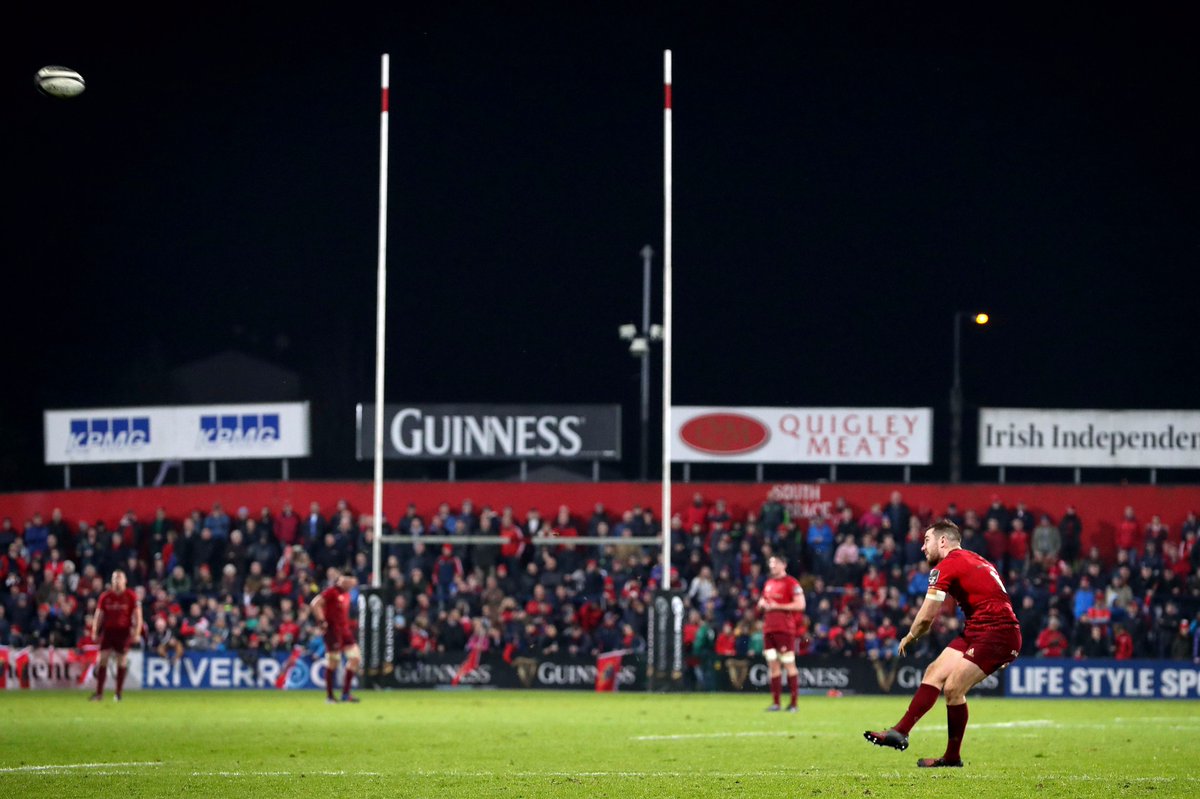 If this was, indeed, Rassie Erasmus and Jacques Nienaber’s last game in charge of Munster, I can hardly think of a better send off.

Ultimately, both men will be remembered for the intangible things. Not the departure, not the speculation – it’ll be for night’s like this. Nights of restored pride, nights of excited clamour, nights of Goliath’s stature returned.

As the 8,008 Munster fans floated out of the stadium at full time, groups of supporters sang along to Stand Up and Fight as they shuffled along in queue for the exit – stopping only to turn and applaud the Munster players as they strolled back onto the pitch – I got the real sense of that old adage that says “Leave the shirt in a better place than where you found it”.

Let’s get to the game;

There won’t be any epic poems written about how Dragons performed in this game – mainly because they were fairly average. The Dragons are game, they work hard, they’re a decent defensive unit and Munster comfortably put them to the javelin – that sick reference will be the last dragon slaying one I’ll use here. Unless I can think of a better one.

The opening 20 minutes was a little frustrating.

Munster had a lot of the ball but handling errors and some poor cleaning out allowed Dragons to relieve the pressure and take decent field position. But the sense that we’d get our eye in eventually was palpable. Until it finally happened.

Hanrahan was the architect, as he would be for most of this game. He cut the Dragons to pieces off quick midfield ball and put Scannell away for the opener before banging the conversion over from the touchline.

The Dragons answered back with a penalty but the die had been set.

Munster would score again through Simon Zebo later in the half off of a powerful Cloete run and offload (more on him later) but I got the feeling that Munster were setting the table for a big second half push. Some of the passing from half back wasn’t great, and we certainly could have had more than the 14 points amassed in the first half, but we were consistently stressing the Dragons defence and that would be worth points later.

The second half was an exercise in pulverisation.

Directed by the excellent Hanrahan, Munster would run in five tries and in doing so, find the space that had eluded them in the previous games. Passes stuck, lines converged and offloads stuck. Jack O’Donoghue’s try was the pick of the bunch – a barging run from the excellent Robin Copeland set up Darren Sweetnam, who popped a reverse pass to O’Donoghue on the wing for the money try of the game.

In the end, it was a good, old fashioned dungeon pumping. We can look at the weakened side brought over by Dragons and assess the overall meaning of this game as being less than important, but the manner of the win was pleasing.

Dragons were there to be mashed, and mashed they were.

The base line rating for this game is a default Two Crown rating. As such, here are the standout Three Crown players from my view on the East Terrace with two frozen stumps for legs.

Rhys Marshall dismissed the iffy lineout throwing of the previous weeks to go 100% from the touchline in a really effective performance. Rugby Rhys showed up all over the pitch and looked dangerous with ball in hand.

Billy Holland – man. 170 caps and 9 front line games in a row for The Mechanic. He just keeps showing up, working hard and doing the dirty work. What a servant. This was a typical hard working performance that showed all you need to know about his values and abilities. Teak tough.

Jack O’Donoghue had a great run out on the blindside, and the simplicity of the requirements really suited him. He looked athletic, powerful and mixed subtle touches with some brutal hits in defence. His lineout jumping is becoming a real weapon, too.

Robin Copeland had his best game for Munster since last year’s game against the NZ Maori. Sure, Dragons aren’t the biggest pack but Copeland constantly made ground on kick returns and turnover ball that caused real damage. He was always looking for the ball out of contact too and showed what he can do. Powerful display.

Chris Farrell will have to be careful not to be pulled up by The Hague for the torture he inflicted on the Dragons’ midfield and back three. He vaporised their carriers and got gain line every single time when he took the ball. Deserved a try for all the space he created for others.

Sam Arnold came on, scored two tries and looked real impressive doing it. Pacey, powerful, smart lines, cannon ball defence and the right blend of narky to impress all in the East Terrace. If he stays fit, he’s a real option.

James Hart had a really good cameo. Snappy passing and some outstanding exits. His best showing in a red shirt to date.

You measure a young winger in tries or, failing that in a specific game, the electricity they generate in the crowd. Alex Wootton is a dynamo. He was our most dangerous player in the first 40, and showed all his qualities – lethal footwork, powerful running and that magic ability to beat people with ball in hand.

Darren Sweetnam had a really effective game too. A weapon under the high ball and a constant threat with ball in hand – he’s like a rugby North Korea with magic hands instead of nukes. His best position might yet be fullback, you know.

Chris Cloete. What a debut. He introduced himself to the Munster crowd by getting stuck into an unfortunate Dragon that lingered a little too long near a Munster breakdown. Cloete drove past the ball, collar in hand and threw the player to the floor. Welcome to Musgrave Park.

Cloete was hugely dynamic with ball in hand – like a cannon ball with Schwarzenegger arms. He went through tackles, hit the deck and powered on to the point where it seemed to surprise his cleaners. He was also hugely unlucky not to get the reward on two clean jackals.  Like I said, what a debut. When he plays next, buy tickets to the gun show – you won’t regret it.

JJ Hanrahan got man of the match in the stadium and it was richly deserved. If JJ has ambitions of being Munster’s starting 10, then he had to destroy Dragons like the Night King and ride them… off to … the Wall? I’m sorry, I lost that reference half way through.

My point is, JJ was both the Night King and the Ice Javelin.

One duffed penalty to the corner aside, Hanrahan was imperious. He kicked intelligently, exited flawlessly, and stitched Munster’s attacking patterns together with pace and a ruthless streak that sent waves of electricity around Musgrave Park. He had a direct hand in three or four tries and was the dominant player on the pitch. He’ll need to duplicate this in bigger games, of course, but this was the performance of a guy who’s got a lot in the tank.

I’ll have some limited GIF Room footage on this game next week as I begin the TRK Premium build to the November International Series and review this initial block of the season.