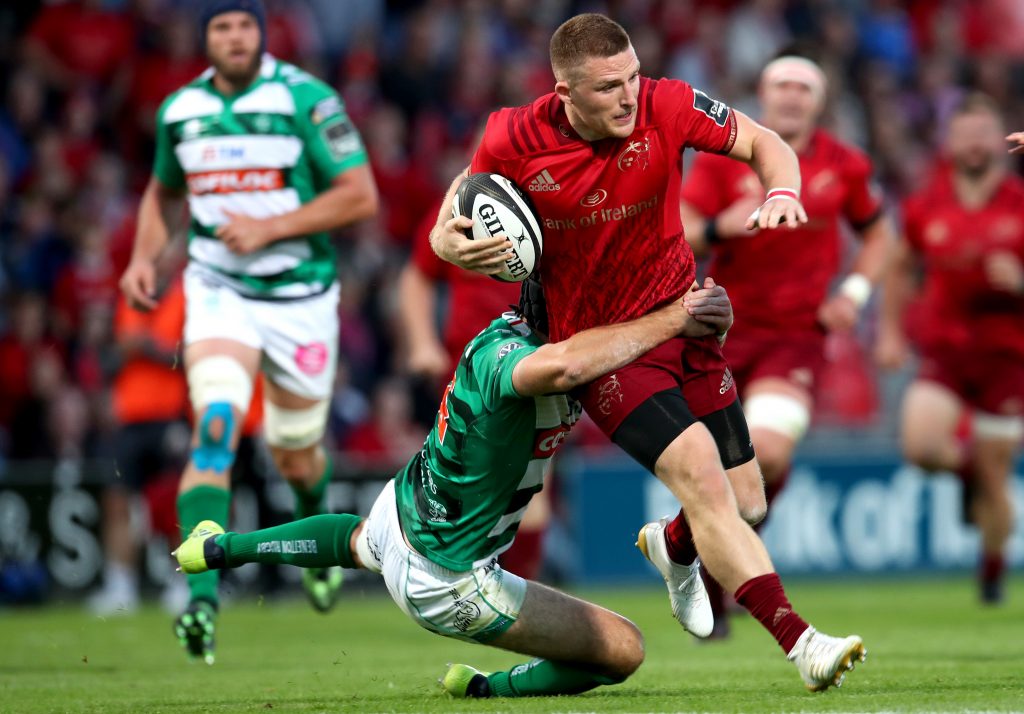 When you play teams like Benetton and Zebre, a win on its own is never enough. A bonus point can, too, feel a little shoddy if it doesn’t have liberal dashings of Razzle Dazzle™ and Free Flowing Rugby™ to go with it. That might be a little disrespectful to Benetton, but that’s the way the viewing public view ritual slaughters at a Damned If You Do Damned If You Don’t Rodeo like this one. If you spank Benetton, congrats – you were supposed to. If you just beat them – woah, CRISIS. If you lose – it’s Kim Jong Un playing a vigorous game of Snap near the nuclear button territory.

Thankfully, Munster mostly passed the specific test criteria that Italian sides provide away from home and the hot knives of faux crisis can stay in their online scabbards for another week at least. The main takeaway here should be that The Bad Guys put away a game enough Benetton Rugby side inside 30 minutes with some really excellent attacking work. The rest of the 50 was played out in varying levels of comfort as Munster emptied the bench and suffered a dip in fluidity as a result.

With the result never really in doubt outside the first 5 minutes, what learnings do we take from this game?

First, the crowd – I’m not sure of the official numbers but there was a palpable buzz in and around Musgrave Park on Friday night. When you consider that it was an opening round game against less than glamorous Italian opposition, it’s a real positive sign that the energy of last season has translated across to the new campaign, initially at least. You can bet that a more lethargic crowd would be trumpeted from the hilltops (as it always is) so we need to acknowledge the energetic turnout in Cork when we see it.

Onto the game itself. As I mentioned earlier, this contest played on in two distinct acts. The first 30 minutes is where the bulk of Munster’s attacking weaponry went on display. Munster cut Benetton to pieces with powerful carrying, excellent forward handling and a relentless tempo that the Italian side couldn’t live with. The second act was an exercise in exposing youngsters to this level and defending. Both acts were useful as a viewing exercise.

Pre-game, the talk on the East Terrace was focused on how Munster would look this season from an attacking perspective. We certainly got an enlightening glimpse of both the technical, tactical and conceptual changes that we’ve put in place. When I saw conceptual, I’m speaking purely about our willingness to go wide when the opportunity arose. Last season, we could have been accused of seeking contact a little too much when better options were present out wide. In this game at least, we seemed to have zero problem getting the ball into space when the opportunity arose and that brought real gains in the opening half hour or so. That desire to move the ball is an important shift in thinking, and it shows close attention has been paid to last season’s late failings.

Couple that with our ability and desire to offload out of the tackle, our forwards handling in midfield. and our footwork before contact was really impressive and gave a real idea of where our focus has been this summer from a technical perspective. Some of it wasn’t “perfect” – there were a few spills and errors – but when it paid off, we chained possession excellently and used our back three to hurt Benetton on a few occasions.

The bonus point came ridiculously easily when we were chasing it, and that kind of intensity mixed with the technical proficiency we displayed in the obtaining of it was hugely encouraging.

When we were fully “on”, Benetton had nothing for us anywhere – not in the scrum, not in the tight exchanges, not anywhere. As it should be.

The second half saw a natural dip as we brought on a fairly callow bench to augment the experimental starting pack. With that drop in physicality, we allowed Benetton a lot of late possession but, as with last season, our incredibly physical defence punished Benetton in contact again and again.

As an early season work out, this was as good as we could have hoped for once the bonus point was secured. There are bigger challenges to come in the near future, but this is the kind of performance that will get the engine up and running nice and quickly.

And now to the Wally Ratings.

This is the inaugural use of the Three Crown Ranking system to assess a player’s game. The reasons for the change can be read here.

The razor witted among you will see that the change is mostly cosmetic. As per usual, players are rated based on their time on the pitch (no rating if on less than 10 minutes bar extraordinary circumstances), if they were playing notably out of position, and on the overall curve of the team performance.

This wasn’t a great day out for James Hart on his competitive debut and very little went right for him. He was charged down, indecisive at the breakdown and to my eyes at least, struggled with the pace of the game. This was to be expected, given that this was his first exposure to the pacier Pro14 game, even against opposition like Benetton. He did make one notable tackle after coming on but will have been disappointed with his day out overall, especially when compared to Duncan Williams performance preceding him.

There’s much better to come from him.

Some decent performances. Here are the notables;

Liam “Boomer” O’Connor had a good few night in the scrum, which he’ll be delighted with. Some of his lifting was a bit off time, but that’ll come with experience. A really nice opening game for him.

Sean O’Connor had a similarly assured debut and didn’t look at all out of place at this level. He was scragged a few times at the top of his jump in the lineout but other than that he was really physical in contact and was a constant danger on the ball in defence.

Jaco Taute and Chris Farrell looked really good at times and hinted at what they might be capable of in the future. They were especially physical in defence and showed excellent hands on a few occasions.

Mike Sherry looked good on his return to action – game as they come on both sides of the ball with some decent throwing. Great to see him back in action.

Tyler Bleyendaal had a mixed bag. He looked great on the ball but his kicking was below his usual standards on a few occasions. He left too many points on the tee but he’ll know that.

The rest were more than decent and showed up well against physical opposition.

What can you say about Duncan Williams? He’s Mr Tempo and he continued on last season’s form with an excellent performance here that really ran Benetton ragged in the first half hour. Sure, there were a small few wrong decisions from the breakdown, but other than that he was excellent. Great pace, mostly great passing and a secure kicking game. The supposed pecking order got a little shake up here. Great stuff from The Dunc.

Munster’s excellent handling in the first half was typified by Rhys Marshall, who acted almost as a third midfielder at times, such was the excellence of his work in contact. His footwork and handling are top drawer and he looked razor sharp around the pitch. Great evening for him.

Andrew Conway was, at times, unplayable and looked every inch a seasoned international. His breaks, handling and positioning awareness was elite and he looked to be continuing last season’s excellent form. If he was anymore on fire here, the blaze would be seen from space.

I said before the game that Jack O’Donoghue needed to look a step above in this game, and he duly delivered. He was excellent. He looked big, powerful, excellent in the lineout and with a fantastic turn of pace that belied his increased size. His game started off by sitting down the first man who came near him after 10 seconds and he continued that vein of physicality for the game. His offload in the last 10 minutes deserved a try for its sheer quality. Excellent.

Jean Kleyn looked like Godzilla out there. In contact, Benetton just couldn’t deal with him and his freaky power close in rewarded him with two tries he had no right to score. He was brutish in defence, a rock solid lineout option and carried like a JCB in tight. Throw in four passes that created genuine opportunity and you’ve a performance that hinted at what a giant this man is becoming for Munster. Absolutely superb.