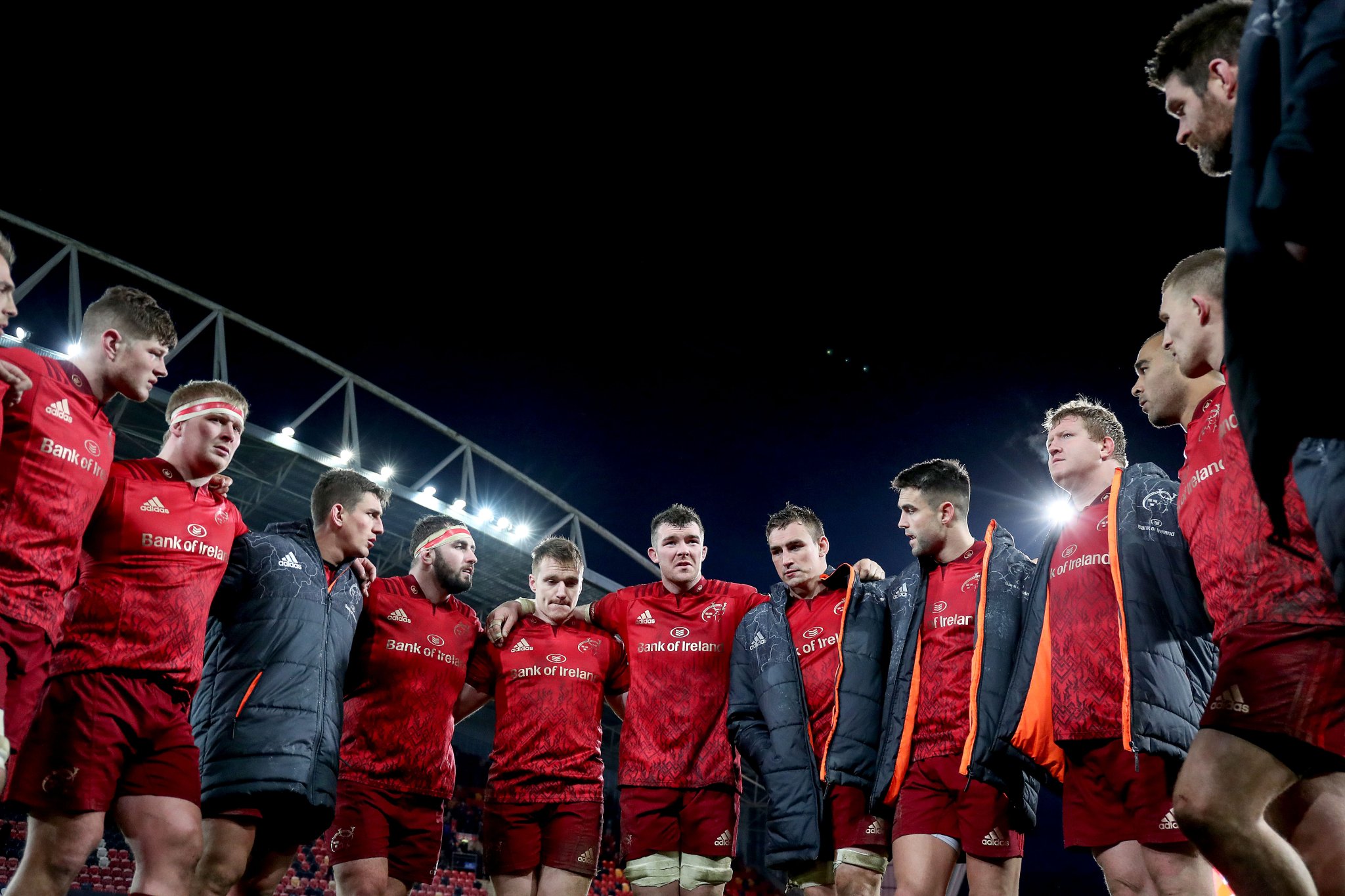 As truisms go, “Never Give The Opposition A 22 Point Lead And Expect To Win” is up there with “Earn The Right To Go Wide” and “Do Well In The Set Piece” in the Great Book of Obvious Rugby Wisdom.

We can talk about the stirring second-half comeback that almost was, and the quality of the four tries we scored, but overall this was a very poor result for Munster in front of a sellout Thomond Park crowd. You just can’t expect to give Leinster a 22 point head start and expect anything other than a loss.

Losing at home? Not on. Losing at home to Leinster? So far from “on”, it can’t even remember what “on” looks like.

But what could we expect with an opening 30-minute performance like the one Munster produced here? We were inaccurate, indisciplined and kicked as badly as we have done all season from 9 and 10. By the 24th minute, we found ourselves 27-5 down and with a mountain to climb. The cause? Some blown tackles in midfield on two occasions and getting sliced up on a poor kick transition.

Yet even at 20 points down, Munster still had enough momentum to trouble the Leinster defence but a combination of poor lineout work and a badly missed penalty to touch killed our momentum at key stages. All the little moments that add up to a win went Leinster’s way in that early period and they set the pattern for the rest of the game.

Our early plan seemed to be based on targeting Leinster’s relatively inexperienced back three under the high ball but our kicking (and chasing) wasn’t accurate enough to compensate. Throw in some handling errors and low-quality lineout ball and you have a rough picture of the first half from a Munster POV. Where we were sloppy, Leinster were clinical and they gladly snatched the opportunities that Munster presented.

But then everything changed.

At halftime, the Munster coaching staff identified the problems and changed Munster’s approach to immediate reward. Munster forced multiple penalties through their phase play and if not for two bad lineout malfunctions, might well have managed to score sooner than the 45th minute, when Keatley finished off a sequence of heavy phases under the posts. Once that try went in, the energy of the game began to flow in Munster’s direction. Passes stuck, carries began to bowl over the gainline and the phase counter began to tick higher and higher. Conway crossed for a try a few minutes later and, at 27-19, anything was possible.

But from there, I felt we stepped back a little from what was working and returned to the kicking game that had failed to work in the first half. It let the air out of our times and in the end, it would be the kicking that cost us.

A contestable kick attempt from Ian Keatley fell right into Jordan Larmour’s hands and the young fullback cut Munster to shreds on kick transition and, in doing so, turned himself into a superstar in waiting with a try of the season contender. There were 10 minutes left to play by the time Larmour had finished his lethal run but that try felt like the winning moment that, in reality, it was.

From there, Munster managed to secure a four-try bonus point with a well-worked series of phases but it felt like a scant reward in the end – mainly because it was. We scored four tries and 24 points but still lost at home by 10 points.

Ultimately, we lost this game because of a horrendously sloppy first half where we gave away a series of penalties, lost collisions on both sides of the ball and kicked extremely poorly from 9 and 10 for large parts of the game. The manner of the halftime adjustment was encouraging though.

Leinster were just better on the day and I think this result is a fair reflection of where both squads are at right now.

We need to be close to faultless to beat Leinster and we were nowhere near that here. These are the days where the whole “Brave and the Faithful” thing actually means something. Remember that.

The end result drags a lot of guys rating down for this game.

Ian Keatley, for example, might have gotten away with a few loose kicks against most other opposition but his two kick transitions ended up in 14 points for Leinster. Add in a missed touch from close range before halftime and you’ve got a tough day at the office for the flyhalf. He did make some excellent tactical kicks between these errors and finished off a lovely sequence of phases but overall, I can’t say he had a great game.

The same could be said Conor Murray, who had his worst game in red or green for quite a while, even including a try and two actual lineout jumps.

Tommy O’Donnell, Peter O’Mahony and CJ Stander were outplayed for the most part. Stander and O’Mahony were dragged down to a worse rating by the overall curve of the result as both worked incredibly hard (especially Stander with 21 tackles). Tommy O’Donnell will be quite disappointed with his performance on review – he tried hard but didn’t make a sustained impact on the game but he was far from the only one.

Kevin O’Byrne didn’t have a great outing here and that’s mainly down to the lineout. There were two clean overthrows and a few blown lineout moves that were a blame pie of jumpers and thrower. In fairness to O’Byrne, he was thrown in here as a late enough change prior to kickoff. He’s a lot better than he showed here.

Darren Sweetnam just couldn’t get into the game in any meaningful way. Dragged down by the end result.

Sam Arnold has been excellent for the last few weeks but he didn’t have a great game here. He missed a fair few tackles on kick transition (understandable) but won’t be happy with a few of his reads in the first half especially. Not a great performance by any means but he’s shown what he can do at this level. Back on the horse.

Not a vintage performance by any of these lads but decent in the context of this game.

I thought all the props played quite well. The scrum was a strength all the way through the game and Kilcoyne, Cronin, Ryan and Archer played a big part in this. Add in some ultra-physical breakdown work from Cronin in particular and you’ve got a decent day out for the heavy crew.

Niall Scannell came off the bench for O’Byrne early in the second half and had a strong impact in the lineout and around the field. He looked close to his brutish best.

Simon Zebo was close to my man of the match here. He came off the bench relatively late but lifted Munster’s backline effectiveness massively when he came on. His “unpredictability” has often been cited as a reason for being held back at test level but for me, it’s one of his best traits. His ability to “make something happen” is something that can’t really be coached. He’ll be missed, that’s for sure.

Andrew Conway had a very mixed game. He was left with little option but to take out Lowe on his break and took a yellow for the team when the fault was the gainline lost in the middle of the pitch. He didn’t have the kind of day he usually has under the high ball on either side of the ball but he clawed his way into the game and made a big impact in the second half.

Alex Wootton had an up and down game – he was exposed on kick transition a few times, but that was hardly his fault. He worked hard up and down the pitch and looked a guy likely to make something happen.

Jack O’Donoghue came on with the game almost gone but his positive impact was hugely encouraging. He made some good carries, tackled well and brought an energy boost that was sorely needed.

Rory Scannell had a decent game. Some decent kicks, big hits and set some nice targets off of set-piece. His assist for Conway’s first was superb. Not his best by any means, but another stage post on the road to his development as a top class inside centre.

I thought Billy Holland and Jean Kleyn were our standout guys in the pack. Jean Kleyn put in another big shift around the pitch and in the tight, as well as getting in a fair amount of carrying too. Very decent stuff.

Billy Holland‘s continued fine form is remarkable when you consider that he’s played 1149 minutes already this season – 15 games in a row. For context, he played 1940 minutes last season. He was decent here without being outstanding. He made some bold lineout calls and did the usual tireless work around the field that’s become his trademark. He’s a machine.

On TRK Premium this week I’ll be looking at Munster’s poor kicking, our bad opening 30 minutes and examining what went right at the start of the second half. It’s only €2 a month for multiple GIF articles, podcasts and other stuff.