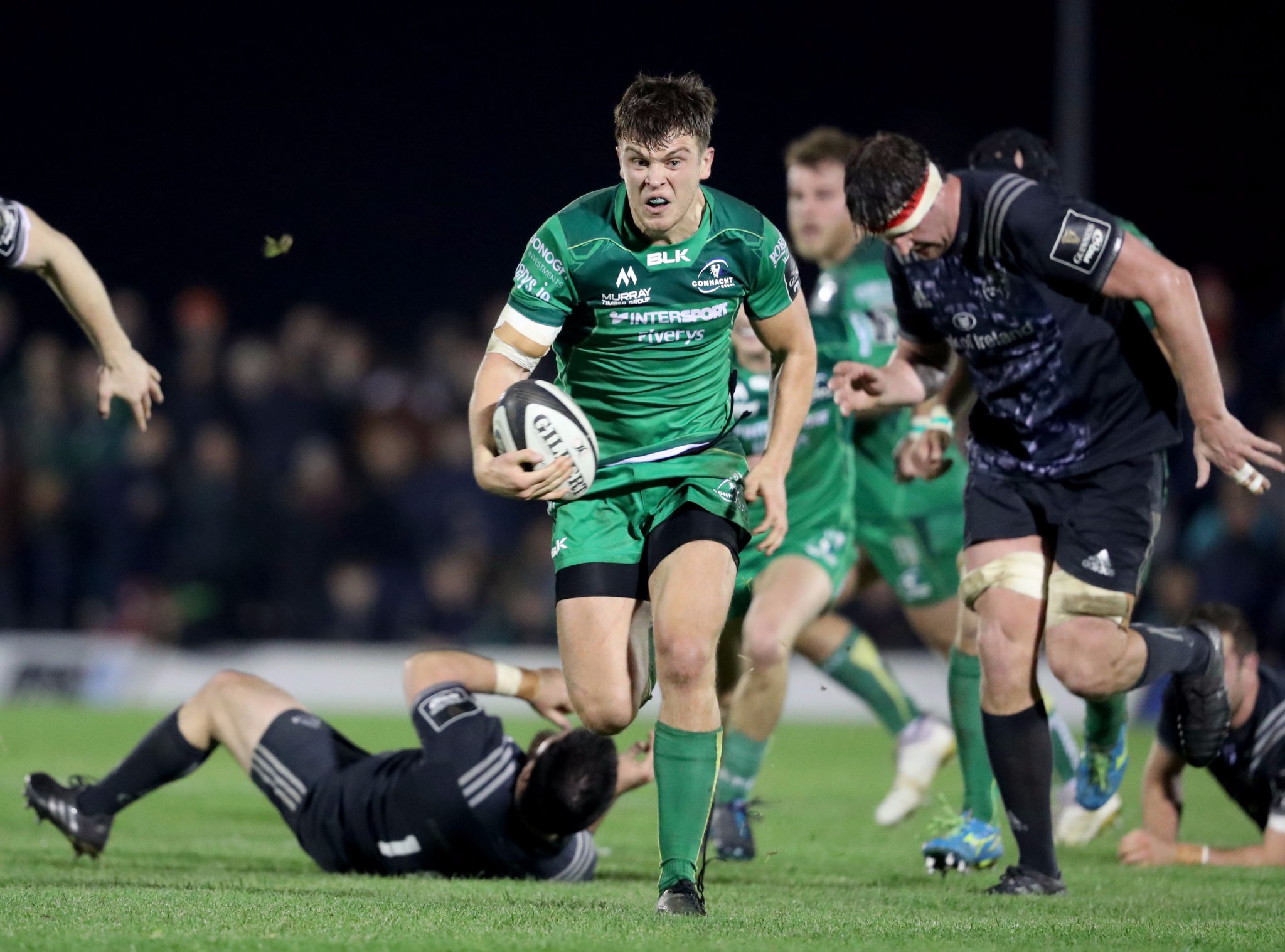 There’s very little in the way of positivity to come out of this game from a Munster point of view.

I mean, the away kit looks lovely out on the field, so there’s that I guess. The rain stayed off. But other than that, it was mostly a devil’s snack box of fumbles, blown defensive reads and poor decision making. It was a Bad Day At The Office™ made sweaty flesh.

First, let us pay Connacht their due respect. They rode their luck at times but when the time came to take the opportunities Munster presented to them, they took them with both hands. This was the best I’ve seen Connacht perform this season and I think it’ll mark a real up turn for them going forward. We couldn’t say the same.

The instant reaction from the ditch will be he usual hybrid of hyper reactive spittle and stubbed toe defeatism. But in that wail of ignorant negativity, there will be a kernel of truth – that something isn’t quite right at the moment.

For me, it’s two things on either side of the ball;

What I keep coming back to again and again when I watch Munster over the last pod of games is how slow we think out on the field. The options present themselves but we’re just not capable of exploiting them right now. In this one, Connacht gave us a number of looks but a combination of bad execution and bad planning spoiled the opportunities again and again.

You can blame the halfbacks – most will just blame Keatley but Murray’s indifferent recent form continued in this game. You can blame the growing malfunction party that is our lineout. You can blame our sub par communication of opportunity. The truth is that it’s a combination of all of these factors and more.

Having re-watched the game, I thought we looked more than a little flat in our ball carrying. That’s where the game was lost. When we went to Stander, we got no go-forward. When we went to Kilcoyne, it was the same. And after we’d burned those two options, we didn’t have another go-to carrying option that could get us any kind of field position against a determined, fresh and physical Connacht pack.

But Connacht’s relative freshness compared to Munster was a minor issue. They stopped up our carriers, hassled our attempts to spread the ball wider and ate up our cross kicks and poor kicks all evening long.

It looked like we were planning a high tempo assault on the Connacht line as the game went to the last quarter but Andrew Conway’s red card was a fairly critical blow. As for the red card itself, it’s probably fair enough. Could Conway do much about it when he’s in the air already? No. Is he going to jump front on? No. If he makes elbow contact to the head is it an automatic red in 2017? Yes. So we can’t complain.

Without Conway, we were exposed to Connacht’s best facets. When down a winger for a full quarter of the game, we were especially vulnerable to centre field scrums, any kind of quick lineout action and bad kick aways.

Our defence in kick transition was poor all evening long and both of Connacht’s tries resulted from poor kicks – one from Keatley directly and one from Zebo indirectly.

The killer blow – try number two – came from a lineout where our first line of defence got slipped and the cover was nowhere to be found. Where was it? Covering a wider option to make up for Conway’s absence. That was the ball game right there.

We did have an opportunity to go for the win. The assistant referee missing a blatant maul penalty 5m out was a real dose, to put it bluntly, but we still had possession afterwards that we just couldn’t work with. We were banking on a Connacht cardio collapse but it never game – they fed on our errors and spat out momentum when they needed it.

We were flat. Connacht were ready for road.

And, let’s be honest, we lost all the big moments in this game and you can’t hope to win any game away from home when you do that.

But in context, a narrow loss in the Sportsground to a fresh, fired up Connacht side five days out from a game as physical as that one against Racing 92 with 14 men isn’t cause for too much fizzing. That won’t stop the fizzing – I’m not insane – but context is everything.

The next bank of games and the international break can’t come quickly enough.

As per usual, players are rated based on their time on the pitch (no rating if on less than 15 minutes bar extraordinary circumstances), if they were playing notably out of position, and on the overall curve of the team performance. Sean McCarthy is not rated due to less than 15 minutes on the pitch. Duncan Williams and Darren Sweetnam did not feature off the bench.

So many guys below their best, so little time. Just a quick rundown of some of the notables;

Dave Kilcoyne did well enough in the scrum for the most part but his carrying lacked some of its usual zip. Rhys Marshall did OK in the scrum and made some nice carries but the lineout didn’t go great with a few overthrows.

Mark Flanagan and Billy Holland did well enough but in context, couldn’t influence the game from an attacking perspective.

Peter O’Mahony, CJ Stander and Tommy O’Donnell were fairly flat for most of this and couldn’t really get a foothold in the game.

Conor Murray and JJ Hanrahan had poor enough outings here. Murray’s passing was below its usual level and didn’t really get to stamp his authority on the game like only he can. That’s mainly down to the turds he was polishing at the back of most of our rucks, in fairness.

JJ Hanrahan is a tough one – he had four errors at crucial times – but he could easily be sitting with a Three Crown rating if we’d hung onto the lead he gave us in the second half, or if the penalty he banged into the corner from halfway had sent a maul rumbling over.

A little headless and too in love with the crossfield kick, but he just needs time at 10. He’ll get it. It’s frustrating, because he’s the best senior 10 on the ball by a fair distance, but that isn’t enough at the moment.

Ian Keatley is a little unlucky to fall on this side of the divide but on second watch I thought the poor things he did just about outweighed the good. He had two bad up and unders in particular that stood out, an unforced spill and some bad options on surge plays but he made three outstanding line kicks, kicked his goals and suffered a little from the poor quality ball Murray was having to polish.

Chris Farrell, Keith Earls and Simon Zebo had a mixed bag but fall on the wrong side of the One Crown rating (spoiler) for this one. Aki came out on top in his duel with Farrell, who suffered from our decision making inside.

Keith Earls didn’t have a great game by any means but looked dangerous at times without ever really looking like scoring a try. He didn’t have much to work with in his 11 possessions.

Simon Zebo scored a try but didn’t really influence the game after that. There were a few good defensive takes and some nice lines but some of his kicks put us under needless pressure.

Andrew Conway was decent enough but the red card really hurt us in the final quarter.

The bench didn’t really give us the impact we needed. To put it mildly.

Overall, not a great day out for any of these lads.

What can I say? Rory Scannell made things happen, or tried to. Simon Zebo will get the storylines post game but it all came from an excellent carry and offload from Scannell. I think he’s one of the smartest guys on the pitch for us right now and the more we can get him involved in everything we do with the ball, the better.

He tackled like a ball hammer again here, as he did against Racing, and if you want to talk about injustice and the Ireland squad, well, we need to talk about Rory Scannell.

I’ll be covering Munster’s malfunctioning attack in this game, our poor defence in transition and why our lineout has seemed to degrade over the last pod of games in excruciating detail in THE GIF ROOM this week.

Get all that and more for just €2 a month by subscribing to TRK PREMIUM.