Even in defeat, there's something novel to look at in the Hurricane's maul attack. 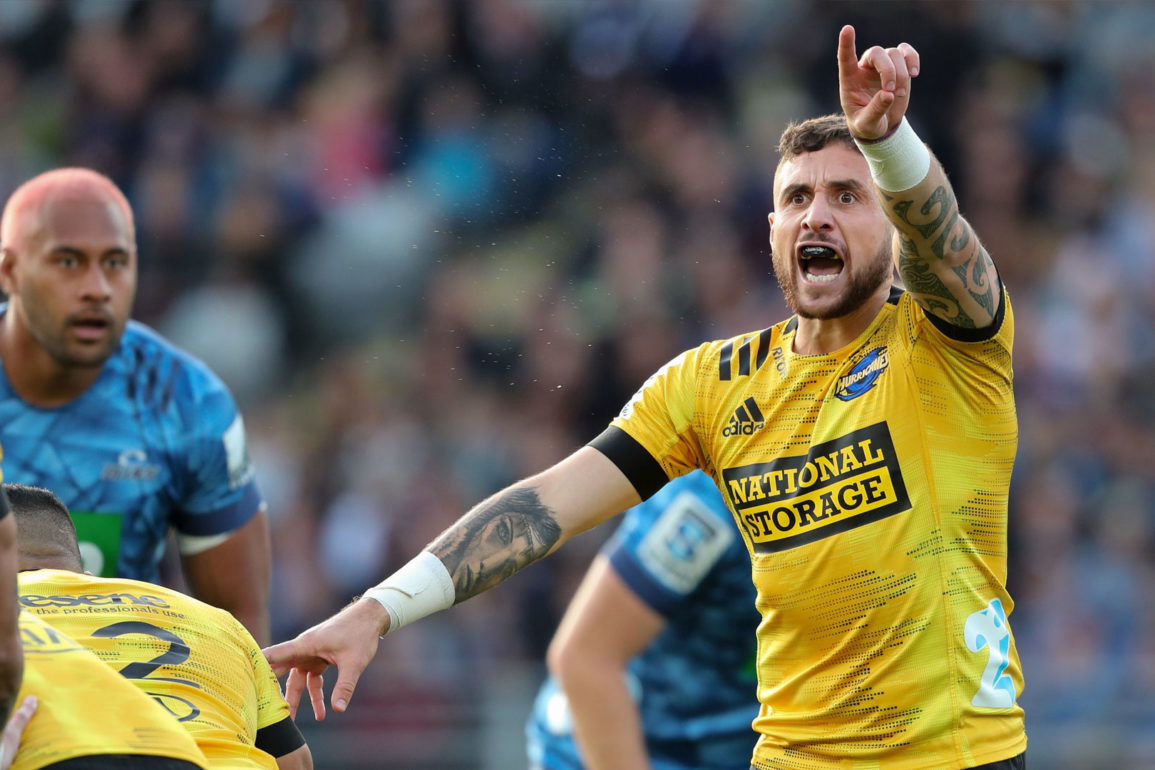 Anyone who’s read TRK for any length of time will know that I love mauls. I could watch them all day and I probably think about mauls more often than is probably healthy but, hey, lockdown’s gonna lockdown.

Second on the list, after mauls, are maul feints and how these structures then relate to your overall lineout design.

Maul feints, as we know, are where you feint as if you’re building a maul at a lineout to constrict the opposition defensive line before releasing the ball quickly to breaking players through deceptive handling and decoy runners. I’ve long found Mitre10 and New Zealand Super Rugby teams to be really imaginative when it comes to their scheme design and I spotted an interesting twist on a commonly used feint in the Hurricanes’ defeat to the Blues this morning.

To start the scheme, the Canes go with a 6+1 forward split at the lineout with two backs – Perenara and Goosen – standing at the front. This is a 5m lineout so if the Canes can generate any kind of linebreak they’ll get to the try line at the very least and score a try at best. The Blues, obviously, will be aware of this fact and plan their defence accordingly.

There are two distinct points of interest for the Blues as they look at this scheme pre-throw. 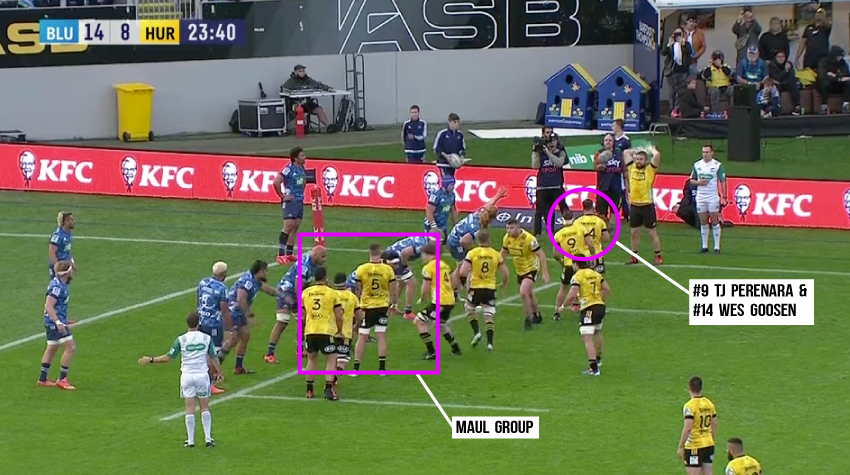 The pod coalescing at the tail of the lineout will be of key interest to the tail defence and infield defenders because any maul successfully built at the tail has an incrementally greater chance of gaining critical forward momentum, which is particularly dangerous 5m out. The Blues have stacked three heavy maul defenders at the tail to guard against this very thing.

Near the touchline, the Blues have deployed three players to guard against any kind of short link-up between Coles, Perenara and Goosen. If we map out the defensive attention map pre-throw, we can see a pretty heavy emphasis on the front and the tail. 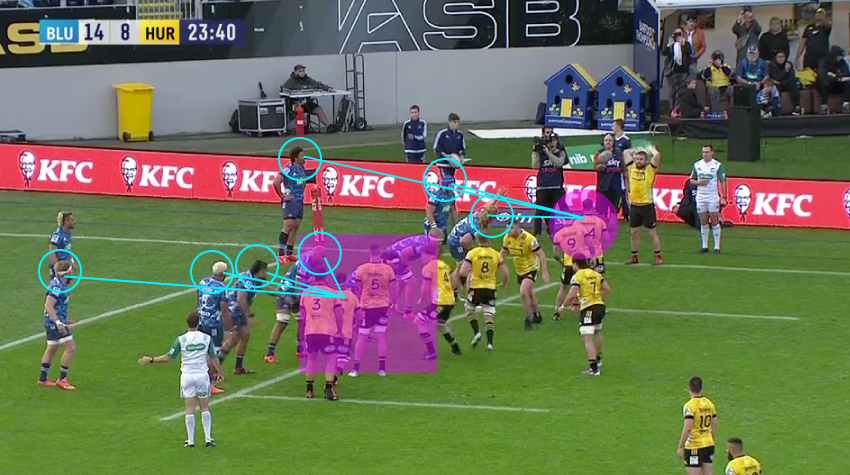 Let’s play through the entire scheme and come back to the details afterwards.

This is a real defensive attention grabber. The design is put together to create a cascading series of confusing events to overload the opposition up until the strike.

The first clue to the scheme is Yellow #3 Tyrel Lomax binding onto Blue #8 Hoskins Sotutu as the maul develops. The other Hurricanes forwards peel around from the front to lock in with Yellow #7 Du’Plessis Kirifi as he looks to receive the ball from Yellow #5 Scott Scrafton. The Blues covering winger and hooker are locked on the touchline side – the lineout scheme has taken them out of the game. 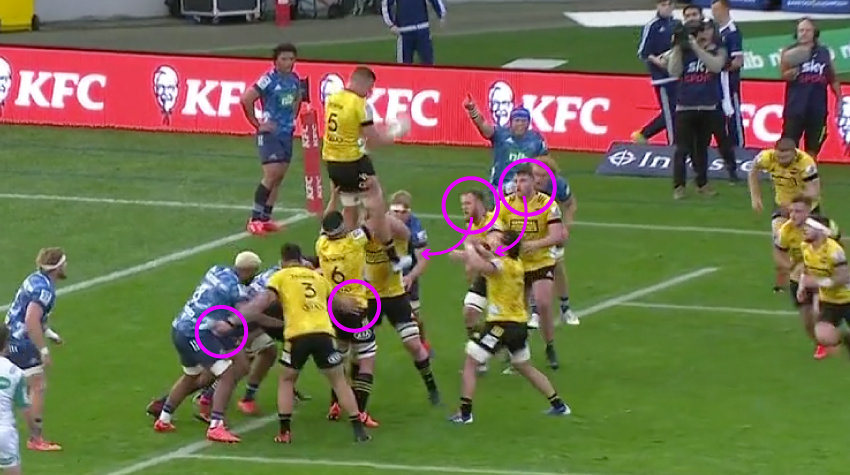 Lomax’s (Yellow #3) bind definitely looks like a pinch here – he’s encouraging Sotutu to commit to the maul while resisting engaging himself. Lomax is trying to create a clean lane for Coles to eventually run through.

This forces the Blues tail defender – #7 Blake Gibson – into a split-second decision moment as he watches Perenara and Goosen peel around from the front. 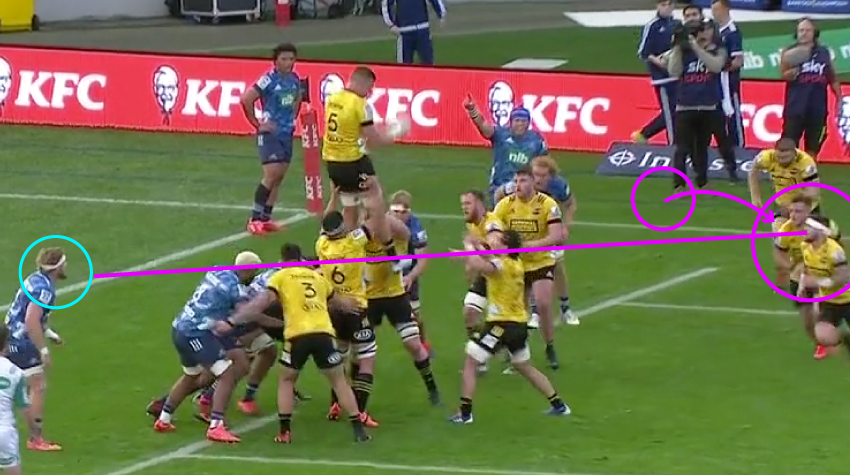 Gibson can’t commit to the maul until Perena and Goosen have finished their routes, which opens up an advantage for the Canes if they chose to drive this, but the scheme is a little more complex than that.

What’s pretty clear is that the Canes are trying to clear a lane – Lomax’s jersey bind and push inward on Sotutu is a direct indicator of this – but a lane for who? 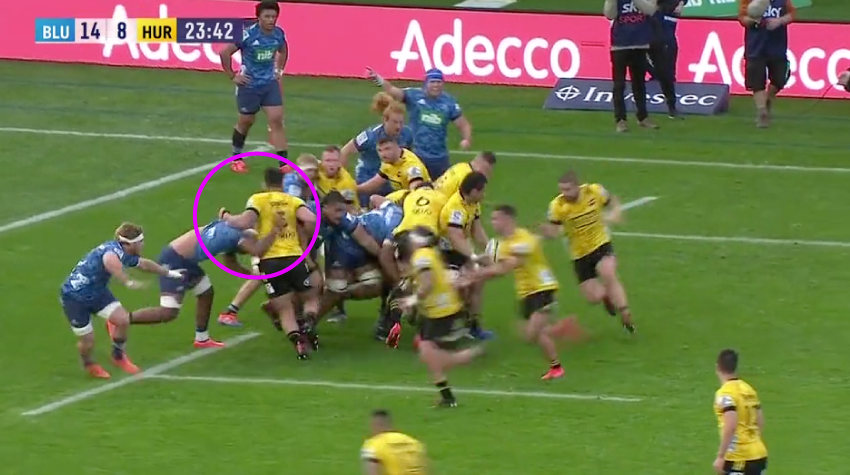 Realistically, Gibson has to watch for a swivel pass to Goosen and then a pop pass to Perenara. 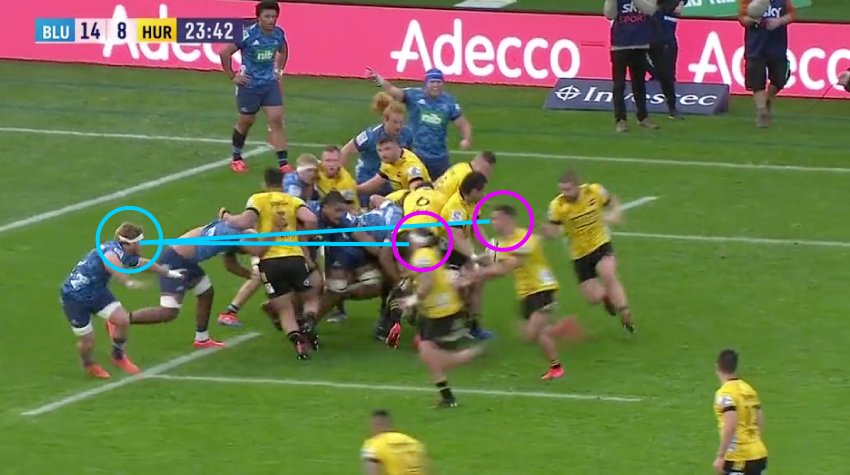 When this move is happening, that looks like a likely option for Gibson to worry about so he will naturally pull away to cover any link between the two while also looking to tackle the ball carrier.

Goosen’s exaggerated animation as he peels around is designed to draw Gibson’s eye for a split second to convince the Blues’ #7 that he’s got the ball and thus commit to his line.

Gibson is dragged away from the lane just as Sotutu wriggles free from Lomax’s grip. It’s all set up for the real target – Dane Coles – to blitz hard around the corner of the maul after working hard to be the third run option.

The gap is there for him to power through, even with Sotutu pulling away from Lomax slightly off-plan. 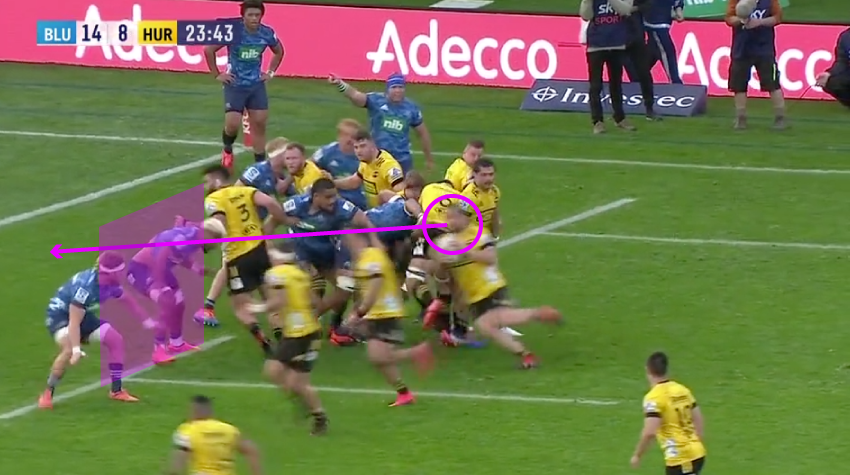 This probably would have been a try if Coles could have cut a little tighter on his route around the side of the maul after the cut.

Gibson does just enough to get a hand on Coles as he punches through the gap but would concede a penalty as he trailed after Coles post-tackle, and the Canes would score off the resulting scrum.

This was a nicely designed scheme.

A two-man decoy run from the front of the lineout to disguise the hooker as the third runner is a play that perfectly suited their personnel and could have worked just as easily with Coles or Asafu Aumua.

In fact, I can only Aumua’s explosivity on this scheme.

It’s a play I’ll be watching out for in the next few rounds of Super Rugby Aotearoa.