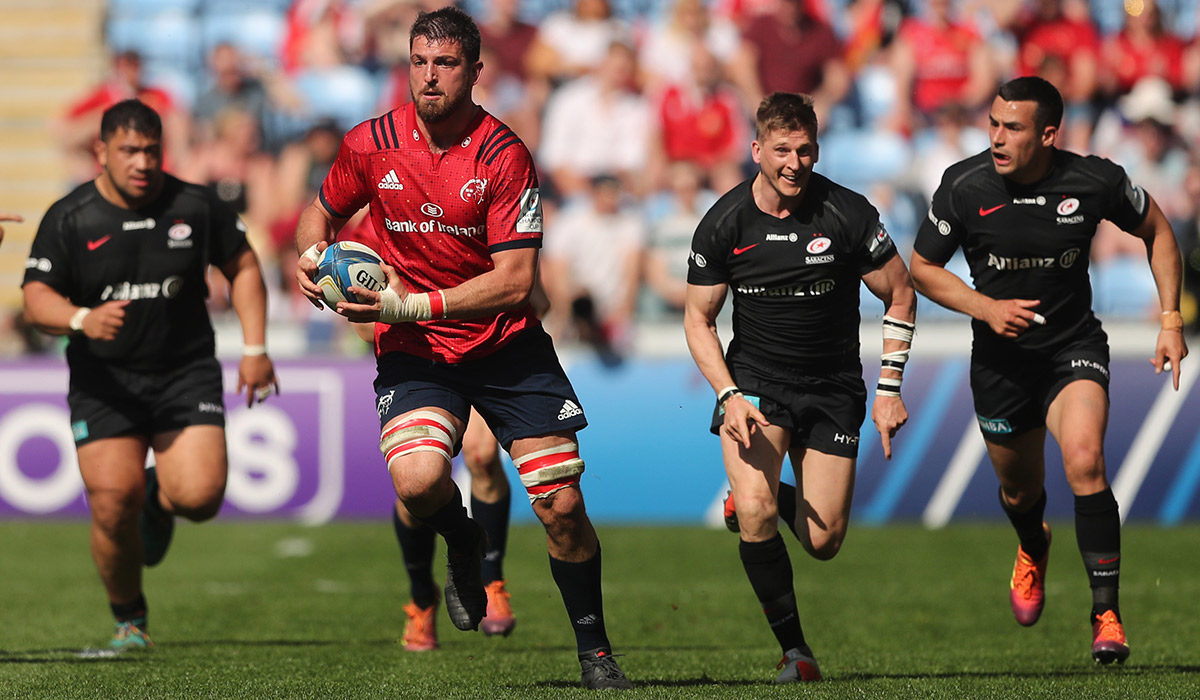 There are two primary states of play in the game of rugby union.

But there’s a third state that has become one of the primary areas of attacking development and defensive focus over the past two or three years – transition. We’ve covered this a fair bit on these pages since around 2017 and, if I was to pick one area of the game where I felt Munster were a little off over the last few months, it would be our work on transition ball.

To define it, “transition” is the state between attack and defence where the attacking team becomes the defending team and vice versa. The better you are at switching between those states, the better at scoring tries on transition you’ll be as a group. Your primary goal as a defensive side is to force the opposition into a position where they lose possession and you either score a try directly in the next possession (with as few rucks as possible) or, if that isn’t possible, taking a large territory gain to attack their set piece or force another transition event out of them closer to their try line.

To understand it further, we can sort transition events into certain brackets;

Planned Kick Transition: This is where the opposition have risked kicking the ball back to you through a box kick or other kick – it also counts for restarts.

Breakdown Transition: This is where you turn the ball over at the opposition’s ruck and attack in the aftermath, sometimes with a penalty advantage.

Error Transition: This is where you attack off an opposition error (forced or unforced), be it in contact – a knock on or gathered forward pass – or off the back of a poor kick.

Set Piece Transition: This is where you turn over the opposition’s set-piece clean and attack in the aftermath.

How teams approach these areas of transition are dependent largely on their overall defensive schemes and the various skill sets they have in key areas (back three/midfield/halfback/back row). For example, there’s not much point in being a transition-heavy side if you have a very heavy, set-piece dominant pack. In that instance, you’re better off going for a kicking to touch approach on transition as it gives you better kicking angles and puts your pack in a position to hurt the opposition in a way that plays to their strengths rather than forcing them to chase up and down the pitch and then try to support faraway breaks.

If you have a very quick back three with good aerial skills, a #10 that could easily play in the back three with their pace, a very mobile pack with world-class jackals and a classic second five style player in midfield, you want to be good in transition.

At the start of the season, I thought we looked excellent when it came to our transition attacks and converting transition opportunities but we’ve gotten more conservative since the turn of the year. A lot of that comes down to Joey Carbery being (more or less) missing since January because of the Six Nations and then a hamstring injury but it isn’t the full story.

When it comes to transition attack, you can be quite dependent on individual brilliance, which can be a bit of a put off for a lot of coaches because, in some ways, it isn’t directly coachable. You could work a player for an entire year and not get them close to the kind of off the cuff decision making,  execution and physical gifts (speed, agility) that the great counter-attackers have when they’re in space. Think Stuart Hogg, Beauden Barrett, Cheslin Kolbe – a lot of what these players do can’t be coached. It’s just in them.

But there are things that can be coached – structure, passing, offload routines and support lines – and, in years to come, I think we’ll see more and more attempts to structure transition as a way to exploit the one area of the game that isn’t being choked up by offside line speed and blitz defences. 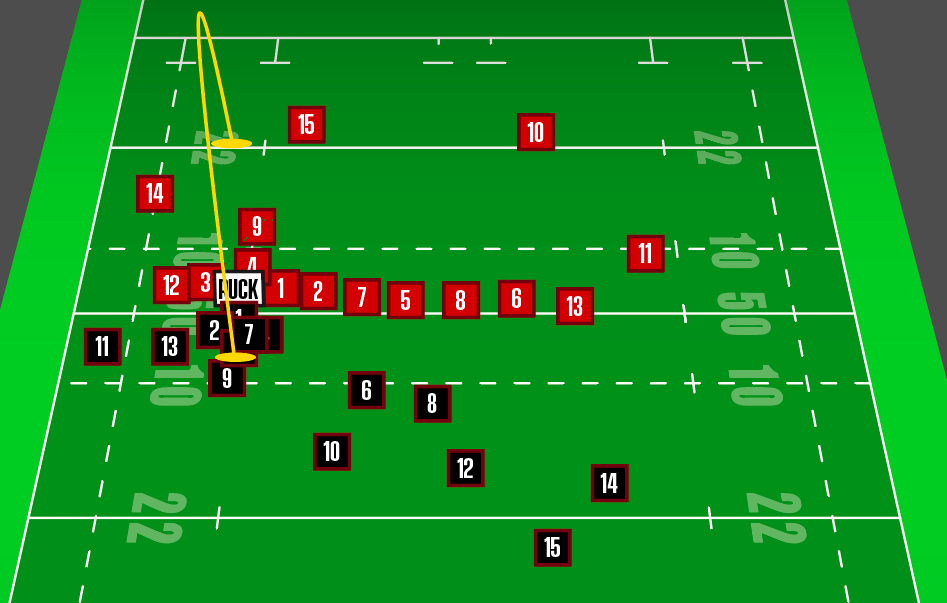 Here, Black #9 kicks from the back of an elongated ruck with Black #11 and #13 chasing into the backfield. It’s a good kick, let’s say, but we’d be confident that our fullback can take this under pressure with our primary line getting back well as ruck support.

What happens after the ball is secured is our transition attack. If we get clean possession, we want the ball into our counter-attackers’ hands so they can attack the opposition where they are weakest – far away from the ruck point.

Here, Red #9 has sent the ball to #10 who uses the retreating screen of red defenders to arc around into a position where he can find an isolation.

Once there, we’ll want to have three other transition attackers – who drifted out from the primary line after the kick went up – committing to a position inside the 15m trams to provide options for our primary counter-attacker to work with, gives excellent ruck support to prevent counter-transitions and, almost more importantly, they draw the opposition towards the touchline. That opens up the trams and the spaces inside the field. 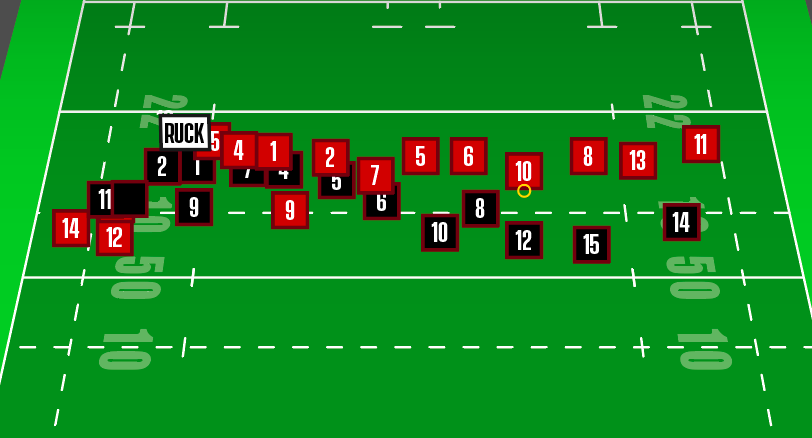 Red #10 has passing options off his left and right as well as carrying and kicking options on the inside and outside.

Here’s a rough idea of how it might work based on the try Carbery scored against Ulster this season based on an error transition.

One set up ruck and then – BAM – gone. Get Carbery into that edge position and you can create the kind of chaotic situations that players like him are good at executing.

Give your best players a chance to make something happen, and you’ll quite often find that they do just that. Give those counter-attackers players who can run aggressive support lines on their inside and outside and you’ll create an environment where you’ll score tries and add value to your defence.

If teams find it difficult to retain the ball phase for phase against your jackals, they’ll either have to kick to your counter-attack or risk carrying the ball negatively for more phases than they can afford.

This kind of transition work depends on your defensive structure – something I’ve detailed here – and Munster will be a little disappointed that we didn’t take the opportunities presented to us last weekend.

For a start, Saracens were very good in the transition events they gave up last weekend. It wasn’t quite a complete performance from Saracens, but it was quite close and we can have no complaints with the result – even if Garces did inflate the score a small bit.

It’s a good kick from Spencer but it’s slightly too far away from his chasers. Murray does a good job of tracking the line of the ball as he’s coming back to (a) block off the chasers and (b) give himself a few options after we (ideally) catch the ball. He can break as a support player or come directly behind the ruck as a passing option like he does here.

The key element of any transition event is time. If you don’t execute the opportunities as they present On the next phase, I think we had more expansive ideas in mind but couldn’t quite execute. Look here;

I think the idea was for Jean Kleyn to swivel the ball onto Bleyendaal here – look at his body position going into contact. If he wanted to nail this carry one on one, he’d look to straighten himself up to use his arms to power through but he’s side on from the start.

A swivel pass out the back to Bleyendaal would have opened up a chance for us to have a real crack at the Saracens edge defence. 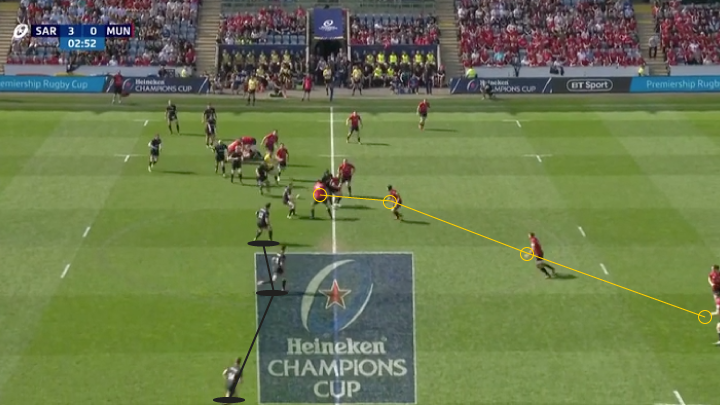 We retained the ball on this phase though so, while it’s not the worst result, we at least have something to work with but the window for the best transition attack was closing as Saracens reorganised themselves.

On the next phase, we still had options but the ball died a little when we hit Niall Scannell.

It isn’t his fault – the ball caught him on the inside shoulder when he needed it on the outside – but he was forced to carry when he took it in this position and had to reshape after collecting the pass.

I think there was a bit of miscommunication on Haley’s positioning here because, for me, the ball had to go to behind the screen here. 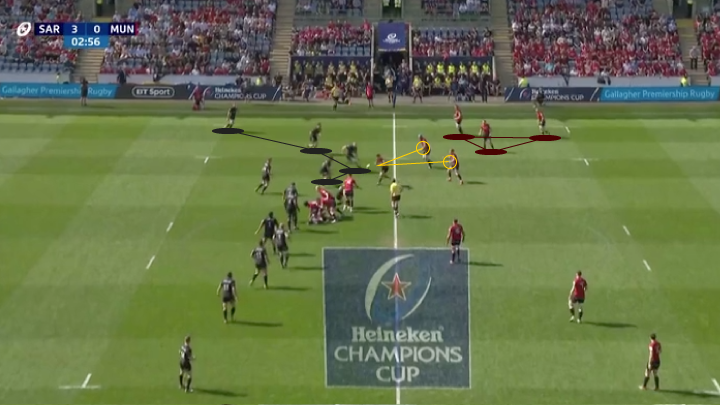 With Scannell, O’Mahony and Conway overloading the trams, we needed Haley to get his hands on this and attack the space behind Beirne to tee up our strike.

It didn’t happen and, with that, the window of transition closed.

We had another nibble at the opportunity after we reset inside with almost the exact same structure – Scannell and Beirne screening for Haley.

But Saracens had reset their numbers and even a shot out of the line by Billy Vunipola wasn’t enough to unlock the space for us.

We ended up turning over the ball a phase or two later.

Our second transition opportunity ended up being a 3 pointer for Saracens but should have been a penalty to Munster after Farrell caught Haley in the air.

Not a yellow card or anything like that but a penalty to Munster nonetheless.

You can see our transition attack taking shape as the ball comes down but it wasn’t to be in this case. 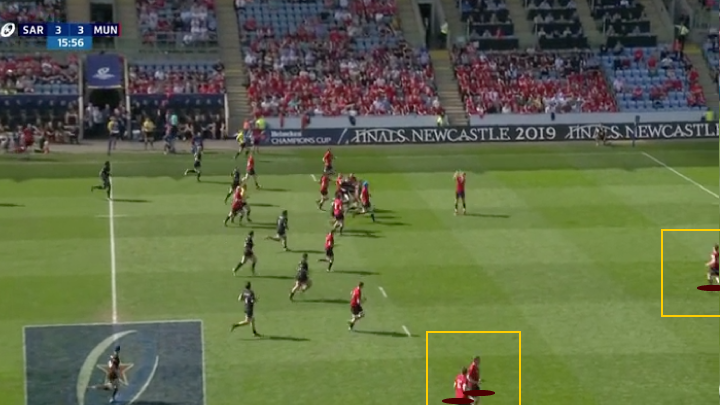 Our next transition opportunity came after the restart following Farrell’s successful penalty.

Conway’s excellent chase sets the ball up for O’Mahony.

Munster are away and we have a transition opportunity after the ball is retained on Kilcoyne’s carry. Once the ball comes back from the ruck, we’re looking at this; 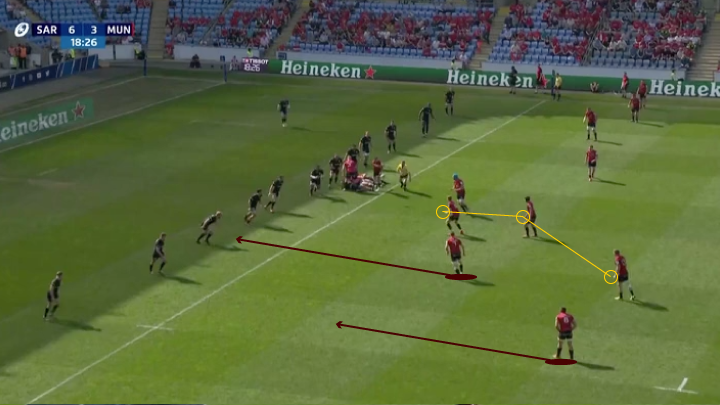 We have O’Donoghue and Stander to act as decoy/option runners with a clear creative line from Haley to Bleyendaal to Farrell, with Sweetnam waiting out of shot. Let’s have a look at how it breaks down.

We don’t get the release to put Sweetnam one on one with their covering winger. This is what we want in this situation – give the man a chance to make a play.

I think we’re let down by a few things. 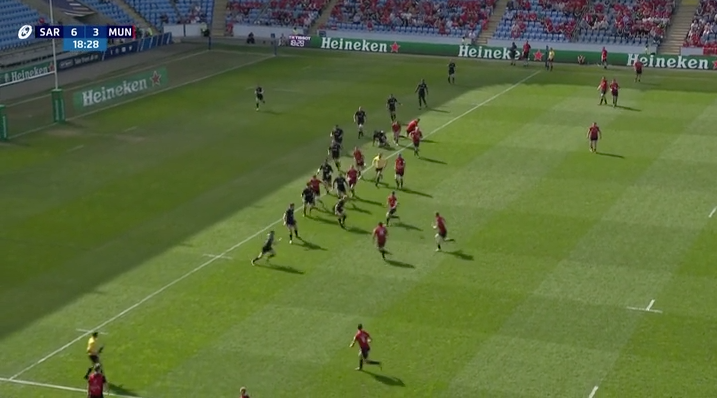 Bleyendaal’s approach line in this situation leaves the inside defence in little doubt where this is going – outside – and Stander doesn’t have nearly enough animation as he’s coming through on the decoy. It doesn’t look like he’s getting the ball so Strettle can make a call to shoot up and in on Farrell.

We lose possession a phase later when Bleyendaal gets blown up for this by Garces.

But at that stage, the transition opportunity was over and we were struggling to inject a bit of pace back into the sequence.

These weren’t the only incidents – I counted 7/8 opportunities where we could have executed a transition better – but we’ll be happy enough with how we converted Sweetnam’s try off a turned over scrum, however dodgy it looked.

If we want to beat the Leinster’s of this world in the PRO14, we will have to be cleverer with the opportunities we force them into coughing up and use time and structure to give our top guys a chance to make something happen for us.