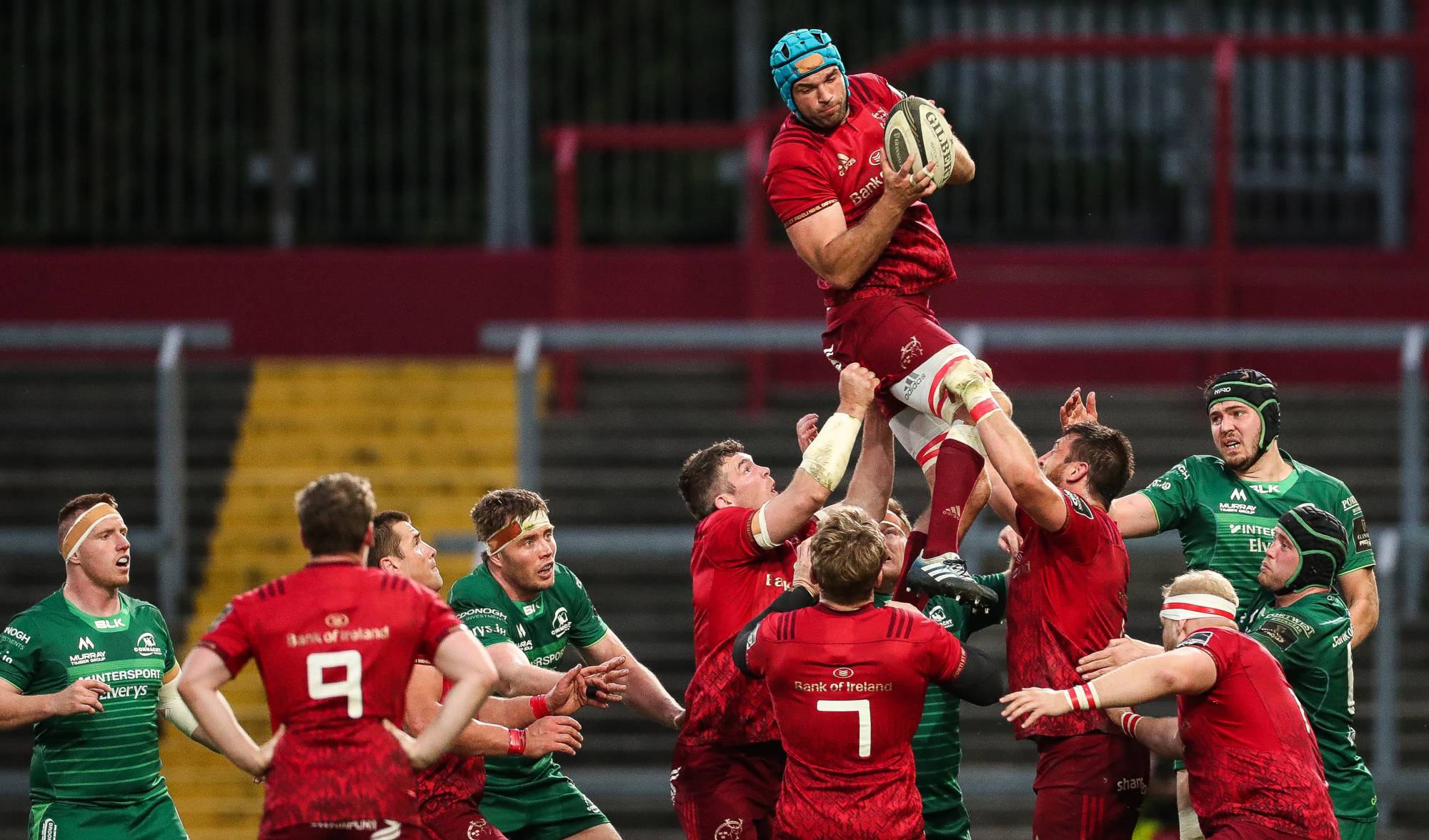 In the aftermath of the loss to Saracens, the need for Munster’s attack to improve was spoken about quite widely.

Munster are looking for a new addition with regards to attack in the coaching department but this shouldn’t be seen as a tacit criticism of Felix Jones. In my opinion, Munster’s attack is close to where it needs to be in some areas but needs an overarching hand to guide the small intangibles that turn a good attack into a lethal one.

We’ve been over transition attack last week – check it out here – but the biggest area for improvement as far as I’m concerned is our set-piece conversion, our multiphase structure and alignment choice and our individual decision-making process at key points of attacking sequences.

You can see what we’re trying to do – and how that might be improved with someone like Carbery running the primary playmaker role – but it’s the small moments that are catching us at the top end of competitions and I want to go some way to explaining those moments here, while using Calvin Nash as an example of how we’re looking to integrate players into certain stock roles. 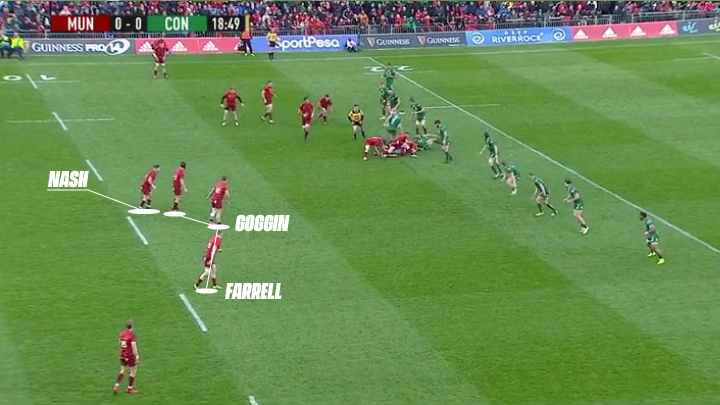 This is a fairly typical structure for us this season. This is a strike alignment created off Tyler Bleyendaal’s positioning while the forwards carry for a few setup phases in the aftermath of a lineout maul.

Nash is lurking behind Bleyendaal in a position we might expect to see Keith Earls take up. I call these structures “dagger plays” because they use a strong arm screen – Goggin and Farrell in this instance –  to draw out the defence while the “dagger” – Nash – hides behind Bleyendaal to land the killer blow from a short distance. This is a difficult route for Nash to run because it demands accurate footwork and a key action when it comes to the decision-making point of the play.

The key defensive player for Connacht in this instance is Bundee Aki, the edge defender while the key guy for us is Dan Goggin

Our two strong arm screen runners – Goggin and Farrell – have to sit down the middle three defenders to allow Bleyendaal and Nash to work through the phase. Goggin will take the ball from Cronin at first receiver, sit down the men on his line and then give Bleyendaal the ball in the second layer with Nash tracking behind him. 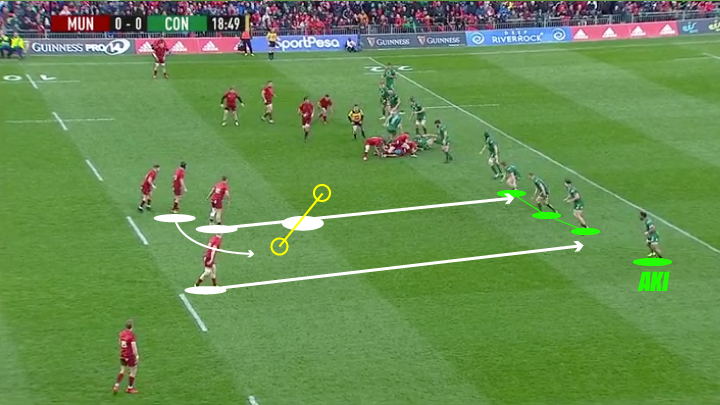 Once Bleyendaal takes the ball from Goggin, he should have Farrell in as a screen runner/option to tie up Daly and Bundee Aki before releasing Nash around the corner.

If it all goes to plan, we should get an isolation on Aki for Nash to bring his pace and agility into the frame.

The move breaks down – just about. Why? Small moments in the play design. 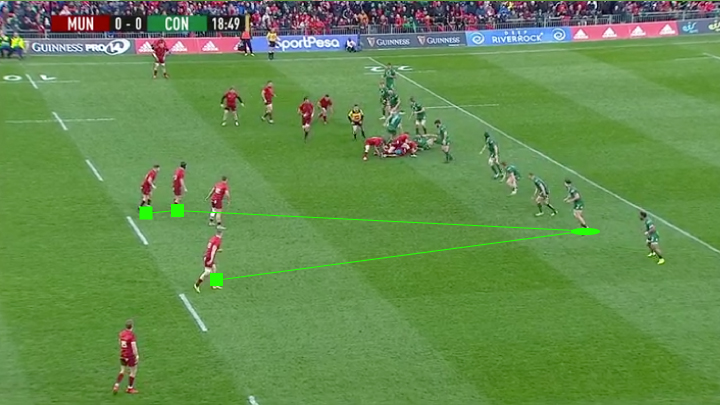 As this play develops, there are three threats relevant to you if you’re Tom Daly.

This third option is the most dangerous for Tom Daly in this instance but our play is based on the second option – Goggin hitting Farrell on the crash. The thing is, this scheme only works if we have the first option – a break from Bleyendaal with Nash in support – as a live option when the ball gets pulled back.

In particular, watch the moment before Goggin passes and right after. 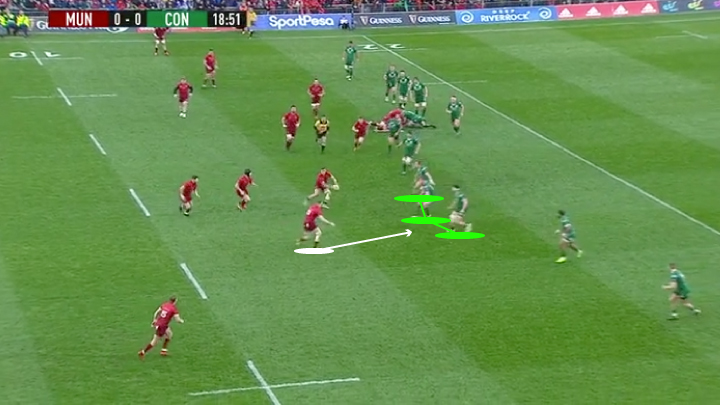 Goggin and Farrell are influencing the middle three defenders exactly like we’d have hoped for in this instance because Farrell is a live passing option. The minute Goggin goes to Bleyendaal in the second layer, what happens from Connacht’s perspective?

Tom Daly can now shoot up into the second layer because Farrell – Munster’s biggest carrying threat – is dead on this play as he’s ahead of the ball. Munster now have two options left – Bleyendaal cutting around the screen or popping the ball to Nash. 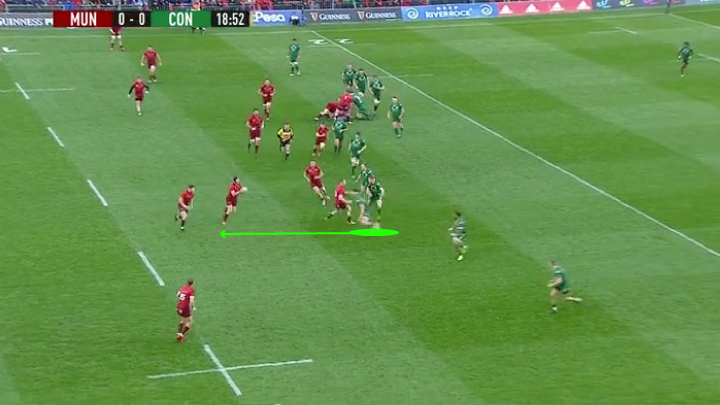 Daly can’t tackle Nash without the ball or afford to sit down on the line and wait for Munster to pass so he does what he should do and pressure the passer. Aki sees this and begins to take the space away from Nash if and likely when Bleyendaal passes it to him. Connacht will know that Bleyendaal doesn’t have the pace or agility to cut around the edge in this instance so Aki can take the space and pressure Nash immediately.

Nash only has half a second to make a decision after taking possession and rightly decides against a pressurised pass to Haley. Aki makes an excellent tackle, dominates the edge space and he’s matched by a good off the ball decision by Fitzgerald.

I’d look to make two small changes. Move Farrell back into the second layer and move Bleyendaal/Nash closer to him.

That immediately forces tougher decisions on the inside defenders, sits down Daly by keeping Farrell in the sequence longer as a passing option which, in turn, interests Aki and gives Bleyendaal more space to work and send Nash away on a more aggressive outside shoulder line with Haley and Conway waiting in support.

Ideally, I’d like to see Bleyendaal running a hard line on Farrell’s inside shoulder with Nash tracking close behind. 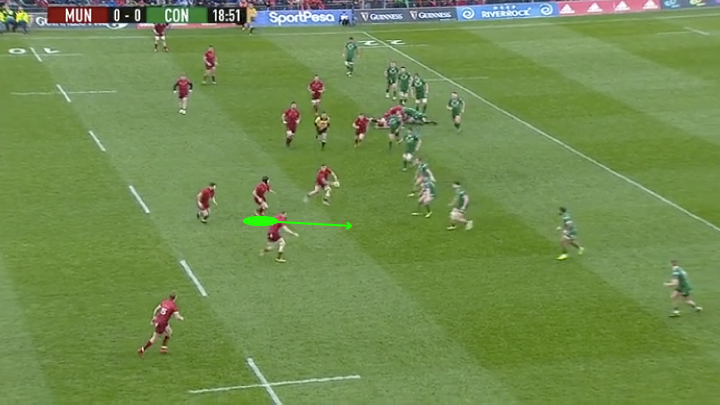 That opens up a pop pass to Farrell that Daly has to worry about and preserves the isolation on Aki, who can’t leave Farrell unattended.

Ultimately, it gives our playmaker more options for longer. Instead of having two options – carry himself or pop to Nash – we’d have three.

Options and our use of those options are the keys to improving our attack. Are our key threats kept alive long enough on plays? Are we giving our playmaker the tools to hurt opposition defences?

You can see that we’re building on our “option” attack on phase play too.

Look at these two examples; 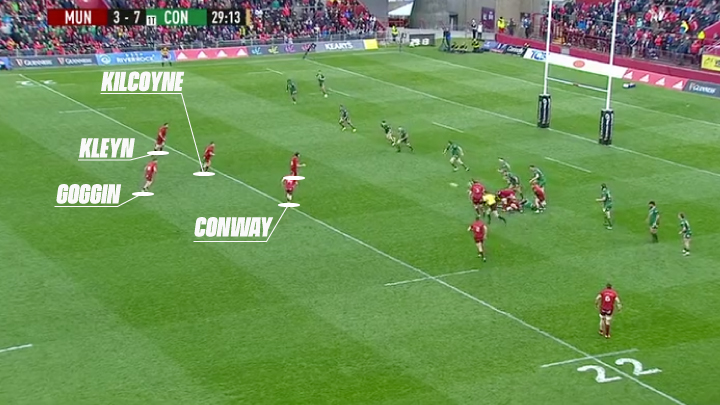 On this phase, Bleyendaal has five options to work with a few branching options thereafter.

All of these potential options should, in theory, make your chosen option easier to execute in this “X” structure.

Let’s have a look at what we picked.

Bleyendaal went with the pullback pass to Goggin behind the screen with a nice hinge onto Farrell, who gets taken down inside the 22 after another nice bit of defence from Aki.

This is pretty good stuff – Kleyn and Kilcoyne are viable options up until the last second – and the pass to Goggin was pretty accurate, even if it was a tad inside shoulder. Farrell’s hit up was pretty good and we’ve got decent options and field position in the aftermath.

After a nice Archer carry on the ruck recycle and a super dominant clear out from Kleyn, we ended up a short side overlap.

You can see our backs create this after the initial Farrell carry, with the big outside centre resetting back to first receiver and letting Cronin know all about where the space was after Connacht folded around onto Bleyendaal’s openside.

When we hit the space we could – and should – have scored a try.

The finish to this was either a Haley offload to Farrell or a finish himself in the corner but I’d have taken a ruck recycle here with our heavy forwards coming onto the ball at close range. Haley’s left arm elbow crook on the ball as he tried to fend Adeolokun was the issue here as he couldn’t keep control as he tried to shape for the offload post impact.

It’s a good example of structure and shape leading to a situation where players make a decision on the field to attack the opportunities created by the shape.

Here’s another example of the X structure from the game but with a slightly different execution.

It’s a little different this around – Kleyn is offering the inside option, Farrell is in the second layer, while Beirne is the outside option – but you can see how the options open up for Bleyendaal as the phase develops.

Bleyendaal one goes for Beirne, who looked for an offload on the outside shoulder only to be intercepted.

I’d like Kilcoyne to do a harder job on McKeon in this instance. I’m not talking about hitting him a belt – just tangle him up a little bit to keep him from resetting as quickly – and keep that offload line to Farrell open. 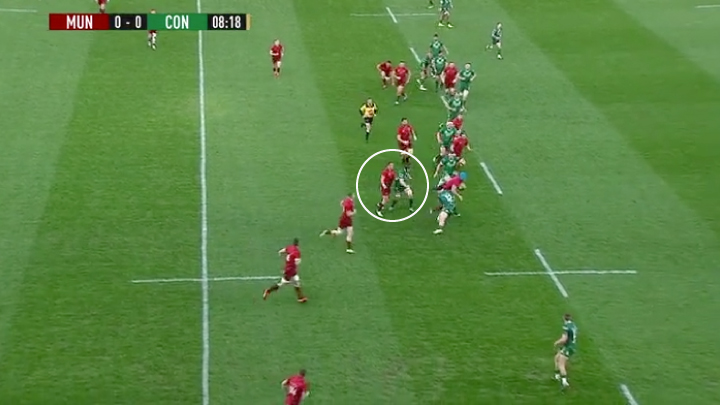 Small things. Little moments. These are the things we need to shape up as part of the overall attacking strategy. They aren’t big changes but the big changes, in a way, are easier. The little tweaks are the ones that give the most value in the end.