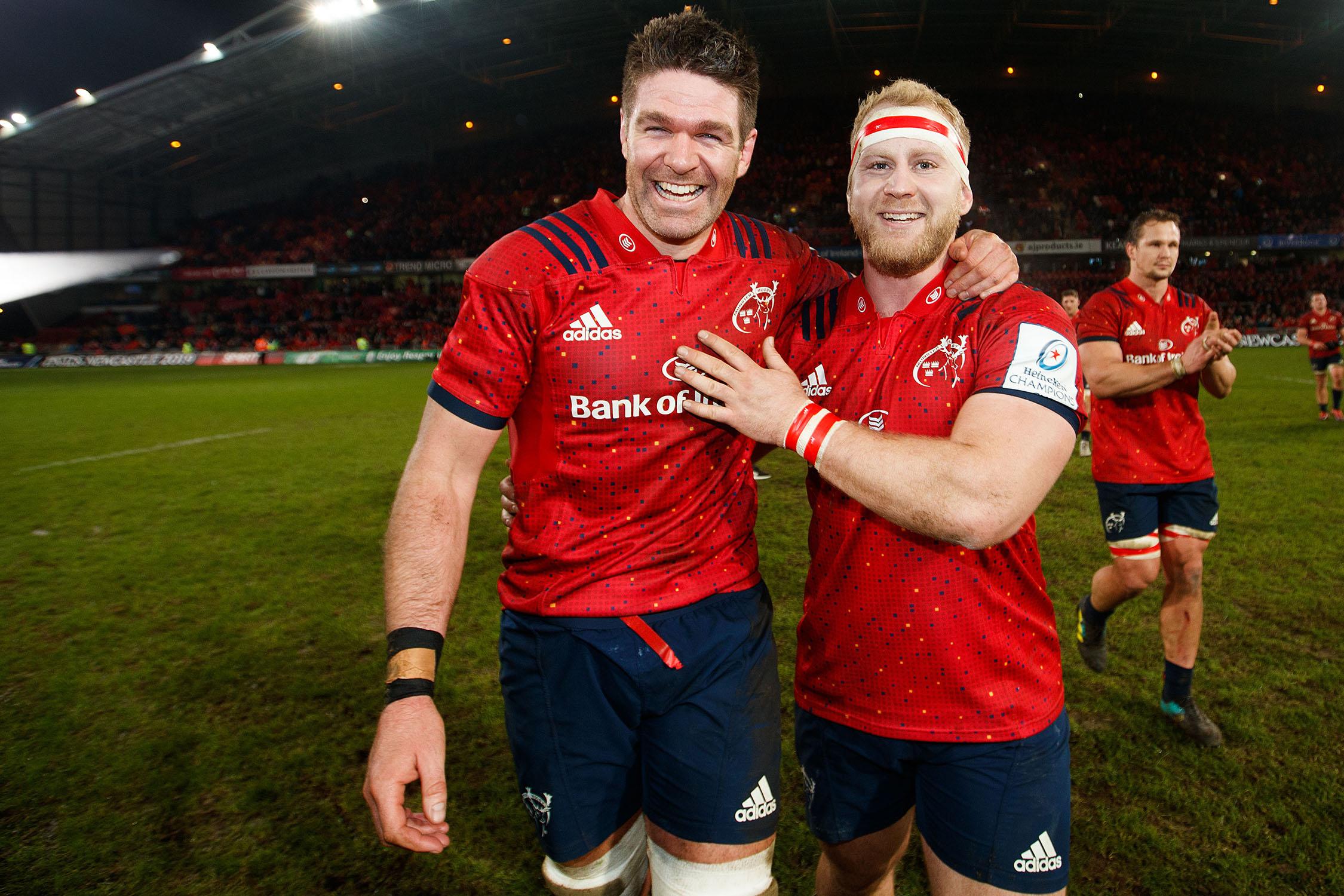 I’ve been trying to think of a clearer distillation of that than Billy Holland’s clean lineout steal in the 66th minute of Munster’s 9-7 win over Exeter last weekend but I’m coming up short. That was a classic binary moment where winning and losing boiled down to one incident.

Exeter had won a handy penalty off Garces at a previous lineout and kicked their way up to the 5m line, as they had looked to do all day. As Beirne and Kilcoyne made their way off, Exeter began to build their lineout shape and Munster would have known the stakes immediately. After 66 minutes of immensely physical defending, Munster would have known that keeping Exeter out off a 5m lineout maul would be incredibly difficult as would stopping their pick and drive game off the back of one. A try for Exeter at that stage would have likely ended in 7 points for the Chiefs and a mountain to climb for Munster with the bones of 10 minutes left to claw back an 8 point lead.

Stop the drive, or stop the ball – those were Munster’s two options.

Let’s have a look at what Munster were looking at. 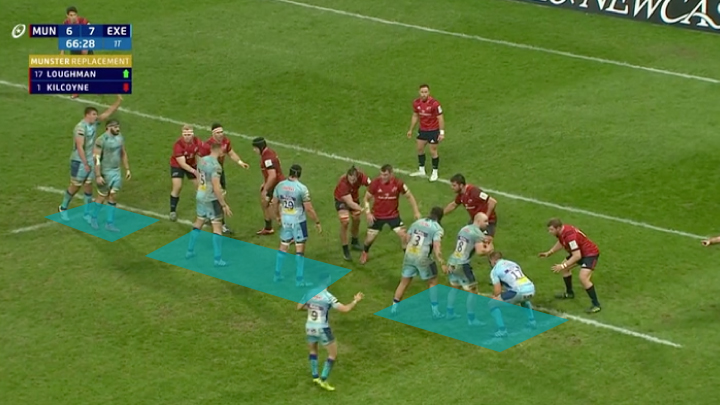 This was a full seven-man lineout with three viable outlet points for the throw. Here are Munster’s counter-launch options. 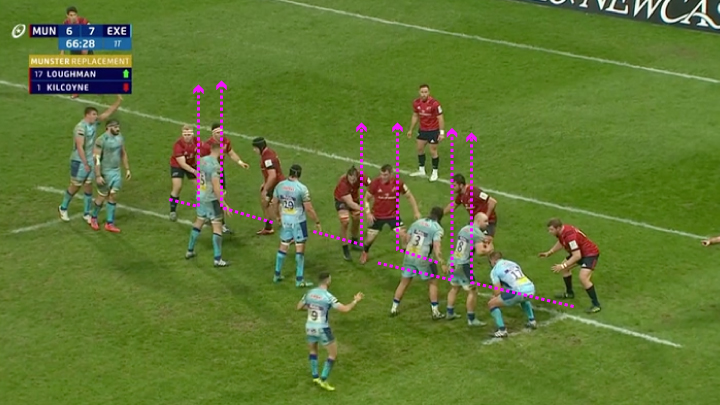 Munster have viable counter-launch pods in all three possible positions. Kleyn (lifted by O’Mahony and Archer) can challenge Kvesic at the front if Exeter want a low-risk ball but I’m not sure we’d even look to contest that pod. Kvesic is a good player but he’s not a guy I’d want bracing a maul against Jean Kleyn and Stephen Archer, even alongside Williams and Holmes and even if Exeter tried a zero-jump maul. I’d back Munster to drive that maul into touch just based on how long it would take the main thrust of their mauling power to get to that front position. 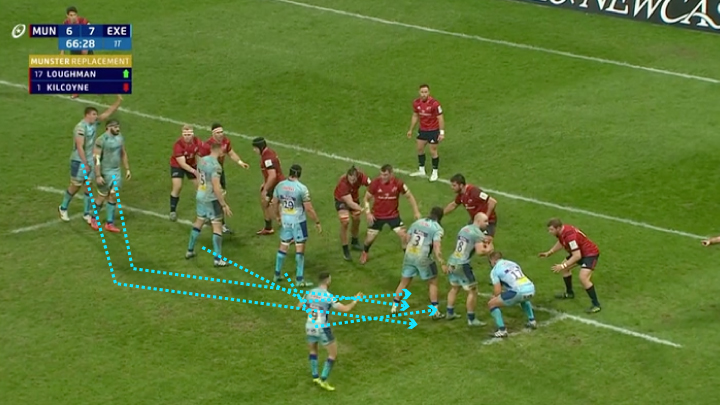 That would be dumb mauling and Exeter are not a side that engages in that kind of thing too often. Munster ruled out the possibility of the front as a likely destination pretty quickly. Archer would stay at the front to guard the possibility and Kleyn would watch it as Exeter were starting to move but Munster were looking primarily at the middle and tail as likely destinations. 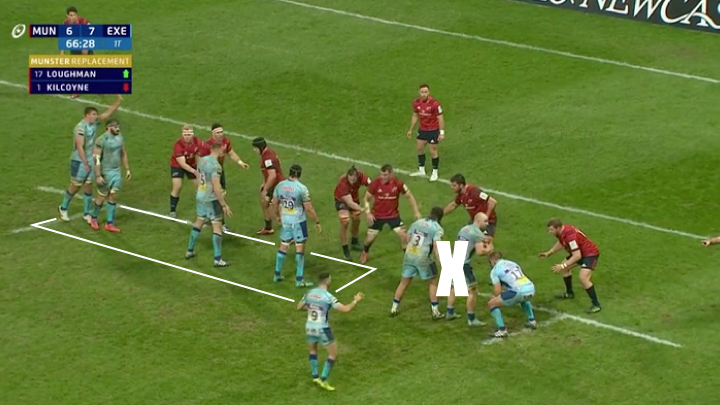 At this point, Munster would have mentally committed to getting two counter-launches into the air to get the maximum amount of disruption on the Chief’s throw because there were four likely Exeter jumpers in that white box.

The role of the lifters – Stander, Loughman with Holland and Botha and Kleyn with O’Mahony – was to watch the footwork of the opposition. Who’s feinting? Who’s lifting? Munster’s lifters would have to watch feet and help trigger the launches.

At this point, Munster are fairly confident that they know where this is going – to the tail. They just don’t know who it’s going to be thrown to but that doesn’t matter once you have a position to target.

Blue #19’s actions in the above GIF give the game away. His body shape screams “lifter”, which means the ball is going to be in one of two places based on Exeter’s alignment. Munster are going to jump in both. 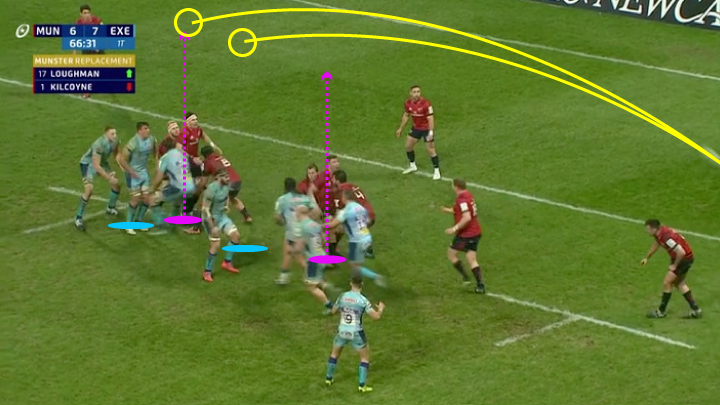 If we track both Munster pods’ jump onto the rough trajectory that the ball would need to go to to hit both positions, you can see how good a piece of lineout defence this was. 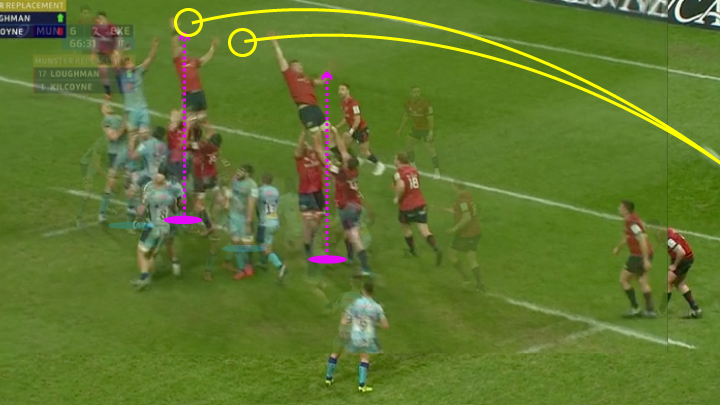 O’Mahony had his hand in the trajectory and Billy Holland – well, that was something else entirely.

Holland was stood at the tail of the lineout with Stander and Loughman. As the scheme unravelled, Holland would have known that he had two decisions to make. Jump in place on the initial throw or wait for the feint to then jump.

If Armand moved, Holland would have to leave O’Mahony to attack that position but if Holland thought it was a feint, he’d have to get into the air to contest on Skinner.

Watch Stander guide Holland’s counter-launch by watching Skinner’s lifting route on Armand while Holland watches the ball. Loughman tracks Hill’s feint to the back too, so by the time that Skinner sets in jump position, Holland is the favourite to win the race into the air because he’s jumping at the exact same time and, crucially, ahead of Skinner.

Let’s see how it played out all in the one sequence.

Holland took the ball clean as a whistle, brought it down and Munster won a penalty a few seconds later that would allow us to clear our lines.

There was no luck involved in this defensive lineout – just split second analysis, outstanding athleticism and excellent communication.