United Rugby Championship Round 3 :: Scarlets (A)

The last time we were in Parc Y Scarlets, Ben Healy won the game by kicking a last-minute penalty from the car park in the lashing rain. As ends to a game go, that was about as good as it gets. Air punching at home, shouting at no one in particular, heart racing – if you were watching live, you know what it was like to watch Munster slowly eat up the Scarlets lead with 14 men, only to go Full Munster in the last seconds to yoink the win at the death.

Victory from the jaws of defeat; you just love to see it.

Let’s not forget, however, that for the majority of this game, Munster were down on the scoreboard and seriously struggling to adapt to the referee on a sloppy, greasy, rainy day in Llanelli where every time Munster conceded a penalty, it seemed that Leigh Halfpenny made us pay on the scoreboard. You’d expect that from one of the best goalkickers in the game but scoring all 27 of any team’s points in a game is some superhuman stuff.

The flip side of that is that Munster conceded 9 of our 14 penalties in Halfpenny’s range and we could (and should) have lost that game as a result. That we managed to win is remarkable but that game is not a template for how to win this game.

The weather is expected to be pretty nice, actually – makes a change for Llanelli, to be fair – so we are expecting to ball and ball quite hard.

And I think we’ll need to if we want to come away with a win against a pretty strong Scarlets lineup. 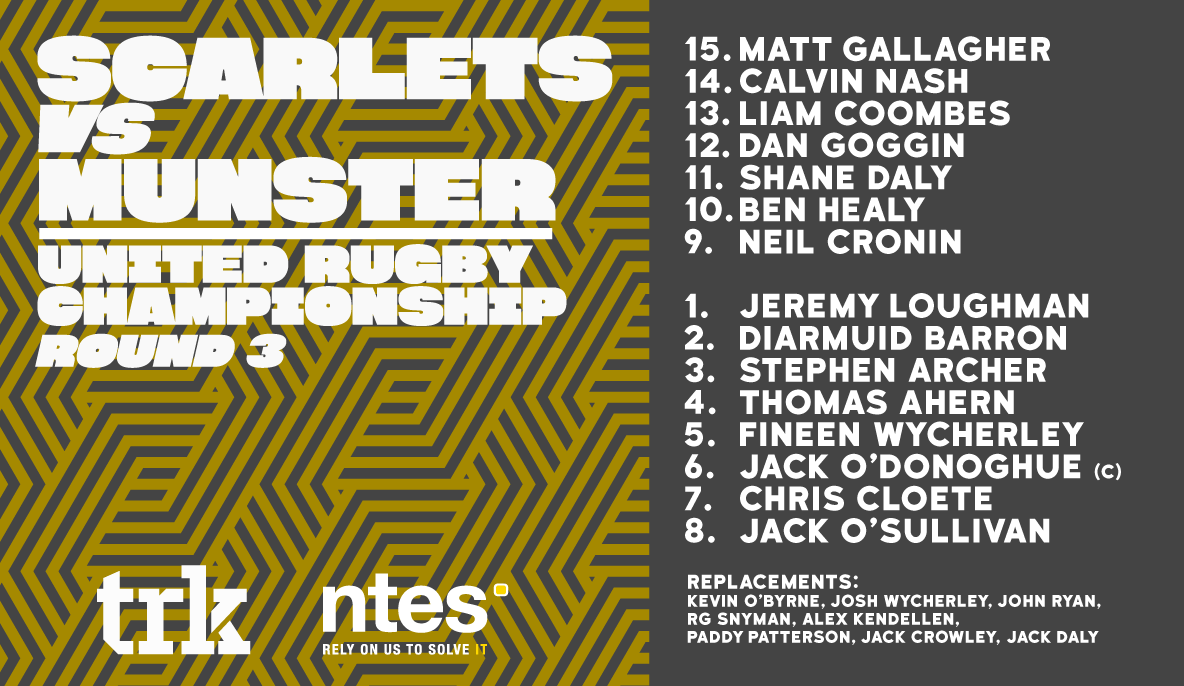 The transition in the post-Wayne Pivac has been far from seamless for the Scarlets, I think it’s fair to say.

They bounced from Brad Mooar to Glenn Delaney in successive seasons before hiring Peel straight from the Ulster backroom team to his first head coaching role this past off-season. How long he lasts remains to be seen but the odds are good on a decent crack of the whip, given he’s a former Scarlet player, a Welsh legend and pretty highly rated by all accounts.

Scarlets are – and always seem to have been, really – a superb attacking side and Wayne Peel seems to be continuing in that vein going on the evidence of the last two weeks. They’ve one loss and one win in the two rounds to date and some of the tries they scored in both games were very “Scarlets” if that makes sense. They are as dangerous on transition and off the setpiece as you remember, especially with their killer midfield and back three.

Despite having a number of injuries, Scarlets have named a pretty strong squad for this game.

It’s about as strong as they can go, really, given those injuries. They’ve brought back their Lions en-masse and have a pretty strong outside backline. Injury has bitten them a little bit at #10 and fullback – Rhys Patchell is out with a calf strain and Halfpenny/Williams are currently out for an undetermined period – but they seem to be doing OK rotating between Jones and the talented Sam Costelow at #10 while McNichol seems to be covering fullback with the kind of quality you’d expect.

The big area of concern for the Scarlets from an injury perspective is the second row, where they have been burned down to the bone due to injuries to Sam Lousi, Josh Helps and the loss of Jake Ball and Tevita Ratuva in the off-season. Aaron Shingler has been struggling with a back injury – it kept him out of last week’s game against the Lions – but he’s back starting in the second row for them here, despite nominally being a guy I’d describe as a Combo Flanker.

Their injury issues were so bad they had to get Lloyd Ashley in from the Ospreys as short term cover during the week and he’s gone straight into the team.

If you look at the last two games, you can see why.

First, the scrum against the Lions, where the Scarlets selected a pretty hefty front row to start and finish the game and yet struggled all night on both sides of the ball. Keep an eye on the second rows in all of these clips;

Next time you see someone scoffing at the idea of a tighthead lock, show them this montage of clips. Look at the props riding the hit pretty well until the locks begin to creak and lift up under pressure behind them, which depowers the Scarlets scrum and allows the Lions to splinter them.

The Scarlets were haunted that it didn’t cost them more penalties than it did. Your props can be big strong scrummagers – and they almost always are – but if your tighthead isn’t braced by a strong scrummager behind him, they’ll get pumped.

Why has Lloyd Ashley gone straight in this week, likely to scrummage on the tighthead side alongside Shingler? There’s your answer.

The other core area of concern for the Scarlets will be the lineout, which seems like an obvious issue when you’re down on locks but not just for the obvious “where are all our tall guys gone” reasons it might seem on the surface.

When you lose a lot of your senior locks, it seriously impinges on your ability to call the lineout effectively or with any real complexity. Look at the lineouts they lost against Edinburgh (with one thrown in from the Lions) to get an idea of why simplicity in the lineout can work against you.

I would imagine that one of Blade Thomson or Aaron Shingler will be calling for the Scarlets in this one, with Lloyd filling in on some front jumps given he’s only trained with the Scarlets this week. Given Shingler’s scrummaging load, I would expect Thomson to be a primary target for Owens on the majority of their lineout schemes and, even then, primarily in the middle of the lineout. That’s before you talk about the quality of their mauling.

I’d also expect them to try and bust out this “no jump” number based on a combination of their front feint and cut-out action seen in the above montage.

For Munster, the key will be to ensure Scarlets have a lot of lineouts. This will require us to kick long and deep when looking to exit. This is generally good practice anyway, given how strong the Scarlets are at the breakdown. If we can get the Scarlets up to 8+ lineouts, we can start to stress their calling structure for variety while using O’Donoghue, Ahern and Wycherley as key counter-launch roadblocks.

I think there’s immense value in placing O’Donoghue as a front counter-launcher with Ahern patrolling the middle space to attack Owens throw over O’Donoghue. If we want to make the Scarlets pay for having a smaller lineout, it’ll be like this – forcing Owens to throw high and slow, which will give Ahern/Snyman a chance to get their long wingspan into the Scarlets throwing lanes.

If we can disrupt them here, we’ll have a great shot at playing with the transitions and width that we’re looking for.