Playing the Dragons at home is one of those games where, all nonsense aside, the only criteria of success is five points, especially at this point in the season.

From a Munster perspective, we have eight games left in the regular season and a bonus-point win this Saturday would put us on 40 points after 11 games, which would be right up there with Ulster and Leinster with a game in hand. Leinster have a make or break test window game coming up against Ulster next week so, by the time Munster come back from South Africa, the top of the Irish Shield could well be within reach but none of that works unless you land your home game “bankers” like this one.

Dragons are better than their league position suggests and the “just” that often gets put before their name whenever you’re about to play them. They’re currently 15th after playing 9 games and while that’s a fair reflection on their win/loss record this season, it doesn’t give you the full picture of how they played against Leinster (where they arguably should have won), Ulster (which was played out the equivalent of a wind tunnel with the sprinklers on) and Connacht (where they won away from home with a bonus point). Those three games are enough to give me pause ahead of this one. On the other hand, Dragons’ Director of Rugby Dean Ryan is without Ross Moriarty, Will Rowlands, Leon Brown, Ben Carter and Taine Basham for this game but he was able to call on Aaron Wainwright who’s back from Welsh camp. The biggest factor here is that Dragons have only played three games since the 17th of December 2021.

Yes, you read that right.

Through the jigs and the reels with covid restrictions and pulled games, the Dragons have only managed to play Benetton twice and Ulster once since before Xmas so as far as recent performance levels go, there aren’t really any performances to discuss with any seriousness.

Munster, however, are more or less into a regular flow of games with a relatively settled pack as we’ve seen since the beginning of this test window block in February. The break we had last week was the last one we’ll have until the 29th of April so, from here on out, Munster will play every single week until Europe and our place in the URC playoffs is decided.

Starting that run of games out with a five-pointer is an important first step that doesn’t quite fit with the relative scale of the game. It might “just” be the Dragons but if we want this regular season campaign to play out the way we want it to, the only result of any value on Saturday night is a bonus-point win. 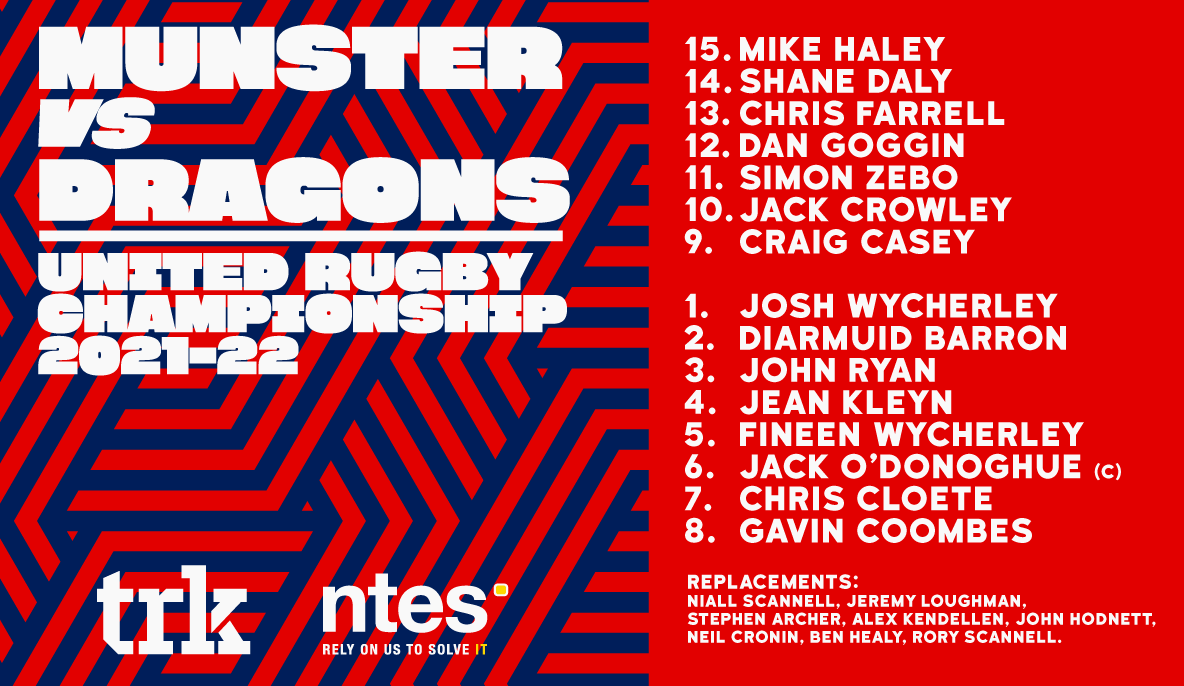 This particular Dragons side has a very distinct build in the pack that opens up a few opportunities for Munster, in theory at least.

They have gone as heavy as they can in the front five but gone with a “small forward” dominated back row. They have Huw Taylor as a second row/half-lock replacement and then two other small forward build backrows on a 6/2 split-bench. Some of this is down to the guys they have missing to the Welsh camp but it’s not too far away from the kind of pack build they normally go with – they are mobile, they compete well at the breakdown and they impact you in the tackle.

Dragons kick the third-most in the league – mostly off Sam Davies – so they are well used to playing without the ball and I would largely expect them to do the same here given the build of their pack. Ollie Griffiths is a key defensive player for them and I’d expect him to be a key tackler and poaching threat throughout.

From a Munster POV, the key to finding space against this Dragons side is in the midfield off the set-piece launch and the space this draws between the collision point and the origin of the set-piece. Fundamentally, this tactic looks to exploit the #10/#12 axis of Davies and Owen through the physical threat of Goggin and Farrell off the lineout and scrum, and the separation this causes between the Dragons’ small forward back row build and their slower, heavier, less athletic front five.

This is most visible off midfield scrums where Dragons’ scrumhalf and inside centre will rally to Davies defensive channel with the outside centre tugging in to cover the screen. Their mobile #8 and #7 fill the space around the collision with Davies’ channel, once again, being the rally point for Griffiths and Wainwright. 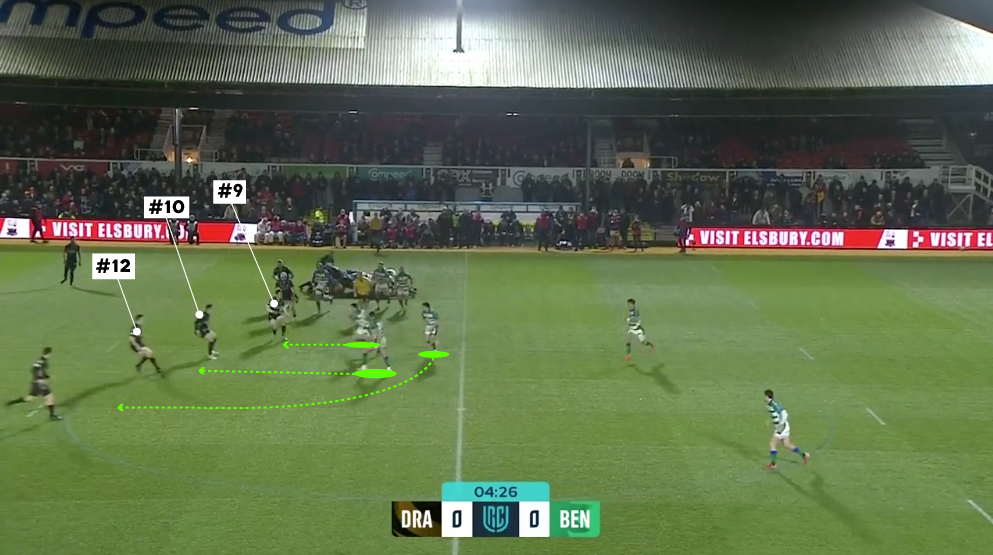 Benetton, in their recent URC game, consistently exposed the gap between the collision point and the launch but didn’t have the pass quality or the offensive clarity to manipulate the rest of the Dragons pack as they transitioned from the set-piece to the defensive line. 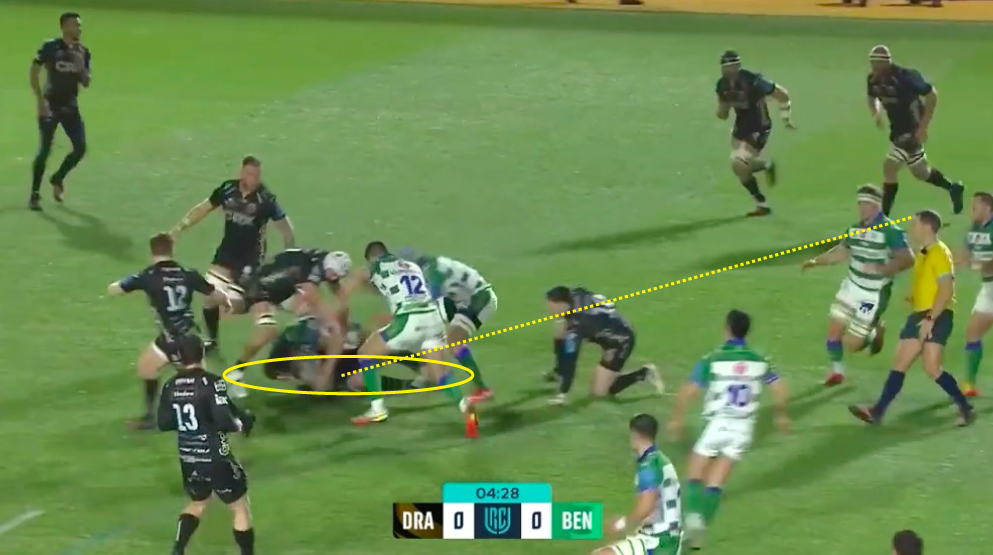 That space is there all day off the scrum launch, especially off the scrum as Dragons will be focusing as much heat as they can to keep Ryan from tearing into Bateman, who’s one of the most penalised loosehead props in the league. That opens the space to the inside shoulder of Davies too, especially when he defends the blindside behind Bateman.

That prevents the flanker from springing straight off the side of the scrum, which isolates Davies for the likes of Coombes to attack down the blind.

You’ll see the same thing off all of Dragons defensive set-piece transitions – the scrum and lineout/lineout maul.

That’s the key for Munster in this game. Our ruck point attack system as we transition off the set piece is perfect for exploiting this very drop-off in opposition defences.

Dragons will likely kick quite deep to soak up what has been a poor season from us on kick transition but if they overdo it on the kicks, there will be scrummages and we can go to work from there.