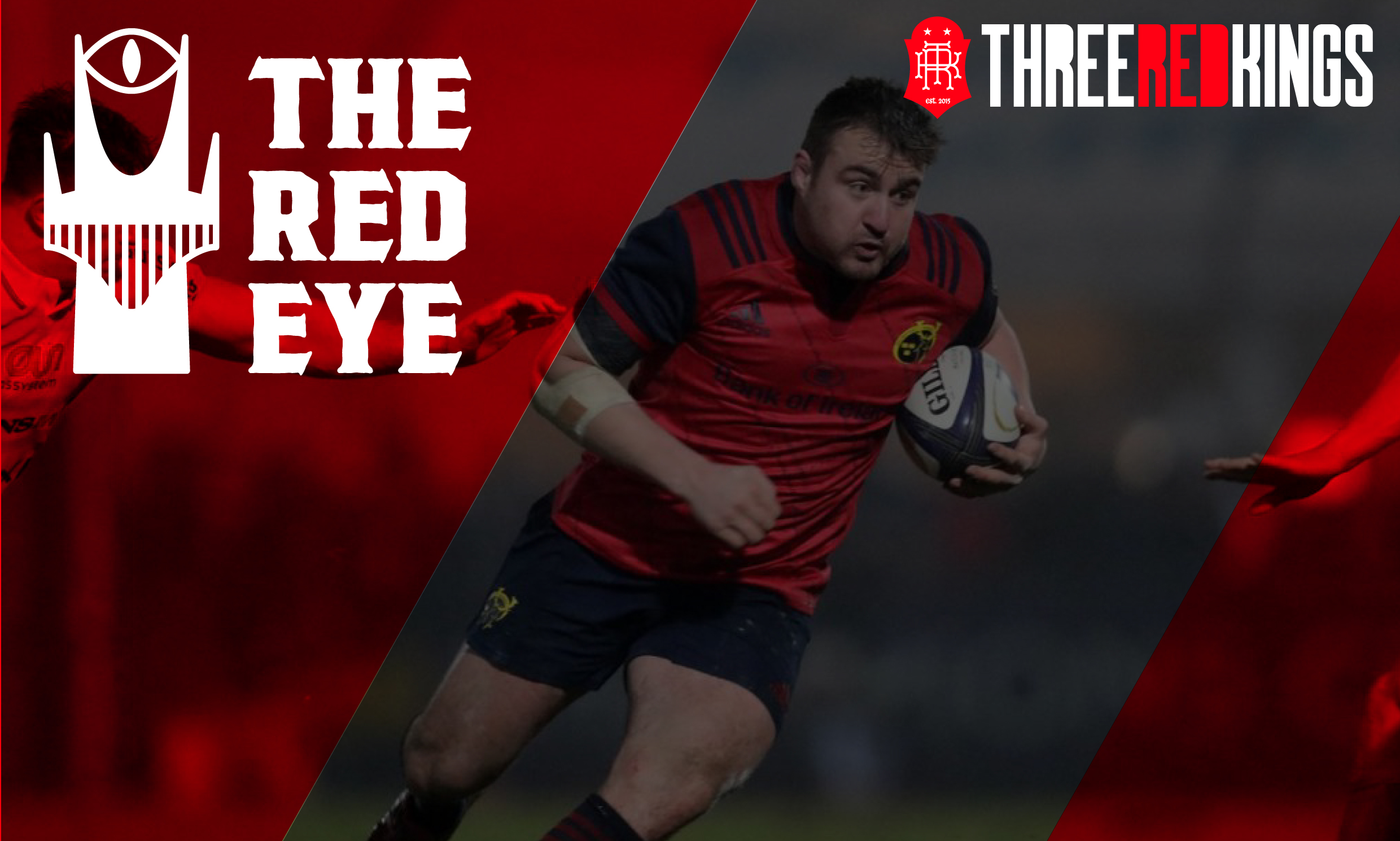 As with most things, context is everything.

On the face of it, you could say that Ulster have come into this InterPro game against Munster looking decidedly understrength bar the presence of Henderson, Cooney and Burns in their starting XV. But when you look a little deeper, you’ll see that Ulster have a lengthy injury list from just last week – Marcell Coetzee (shoulder), Wiehahn Herbst (groin), Rob Herring (toe), Sean Reidy (hamstring), Will Addison (back spasm) and Henry Speight (knee) – and guys like David Busby (knee), Louis Ludik (hamstring), Chris Henry (calf), Rob Lyttle (knee), Luke Marshall (knee), Kyle McCall (elbow), Marty Moore (calf) and Jordi Murphy (ankle) all on the shelf for the short/medium term. AND they’re just back from a two-week tour to South Africa.

Sure, Rory Best and Jacob Stockdale have returned to full training this week but, when you could possibly give them a run out at home next week against Connacht wouldn’t you leave them that extra week of preparation?

I probably would, if I were McFarland.

And that’s the challenge that faces Ulster this week and, conversely, Munster. Any side that has Iain Henderson in the pack and John Cooney running things ruck to ruck and kicking points is going to be dangerous but when you look at how strong Munster have gone comparatively, there can only be one result here that’s acceptable – a Munster W. We can talk about bonus points depending on how it goes but man for man, with home advantage, and after the rocket of last week as added motivation, this should be a solid enough Munster win.

The key words there are SHOULD and BE.

Here are the teams. 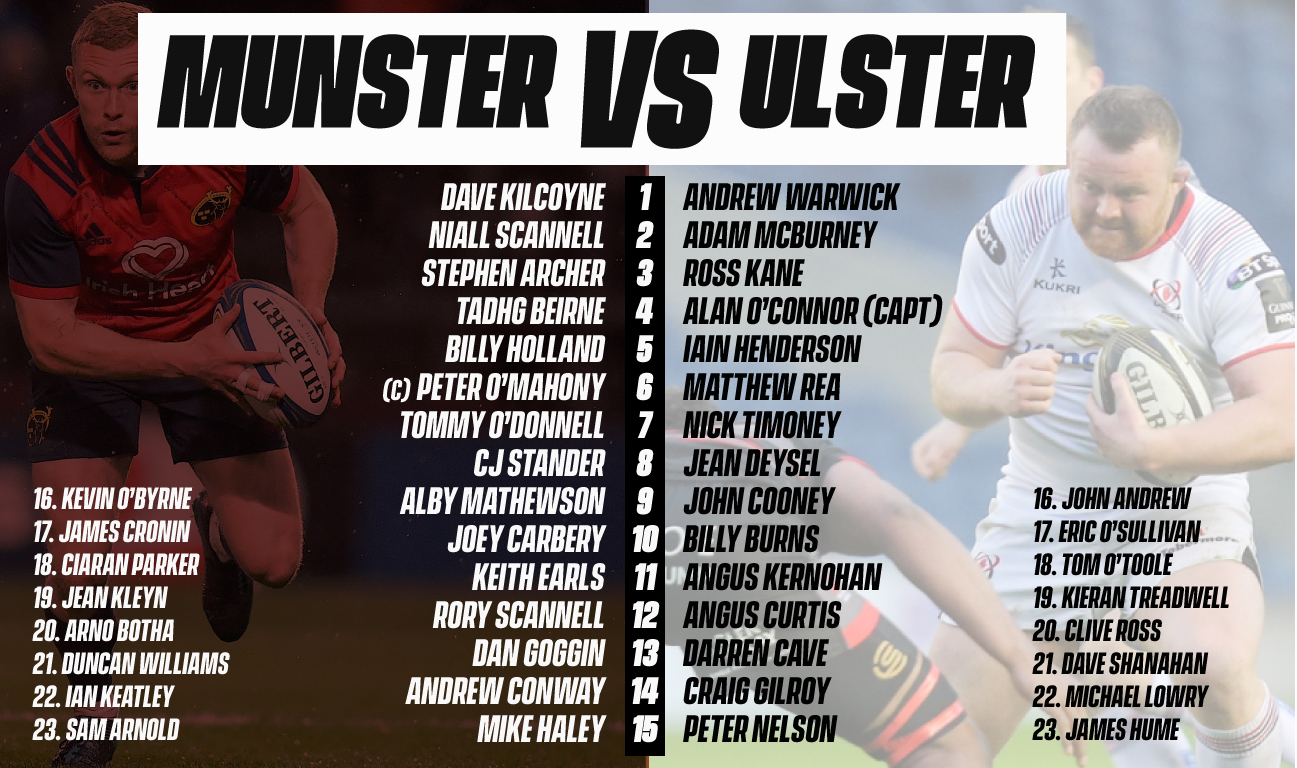 I’ll go into these teams in detail on the Blood & Thunder Podcast.

This report is based on the side Ulster have selected as opposed my thoughts on what you and I might deem Ulster’s strongest possible selection injury and rotation permitting.

Part of me was really looking forward to a possible set-piece showdown between Rory Best and Niall Scannell in this game but Best’s absence has put the kibosh on that. As it stands, I’m now looking forward to the impact Niall Scannell has on his return to the first XV. For me, Scannell is a criminally underrated player in this country – his scrummaging and set-piece work is usually top notch and his heavy ball carrying and rucking was outstanding on the successful Australian tour – but to prove he deserves to be in regular test consideration, he needs to have a stretch of uninjured rugby for Munster first. When he gets a run of games, his impact on Munster’s set-piece has been profound and it’s no surprise to see all of Munster’s statement scrummaging moments over the last few seasons – the Axel game, Edinburgh the same season, Racing 92 away, first half vs Ulster last season – have all had Niall Scannell in a central role.

The scrum will be a massive focus for Munster this week. It’s not all about the hooker, of course, just like it isn’t all about the tighthead prop but the addition of Niall Scannell ratchets up Munster’s scrum as an offensive weapon.

That isn’t to say that McBurney is a lightweight in comparison to Scannell but there’s around 10kg between them and Niall Scannell has become an expert at throwing his weight around at scrum-time thanks to his outstanding timing, pressure application and hip flexibility when striking his own ball.

Our last two losses have been pockmarked by a lottery at the scrum and defending multiple penalty lineouts in our own territory. It doesn’t matter that Ulster have selected a reduced side from what they might start in a Heineken Cup game here – if we give them the same opportunities they can and will hurt us.

Right now, Stuart McCloskey hasn’t been selected for this game – that isn’t to say he couldn’t make a miraculous last-minute appearance – but that omission does create a power problem for Ulster in the backfield.

For me, McCloskey is a key part of Ulster’s attacking strategy because of his ability to narrow and then work around opposition defences. What Ulster do have, is a lot of pace in the back three and three playmakers at 10, 12 and 13. The 10 – Billy Burns – is obvious here but I think without McCloskey we’ll see Ulster play with a much wider aspect on everything from their lineout plays to their phase work.

Ulster use a screen on most of their attacking openside plays with Cave as a key part of the wide attacking group. With McCloskey in situ, Ulster have a deeply credibly middle to wide channel threat on these types of plays. 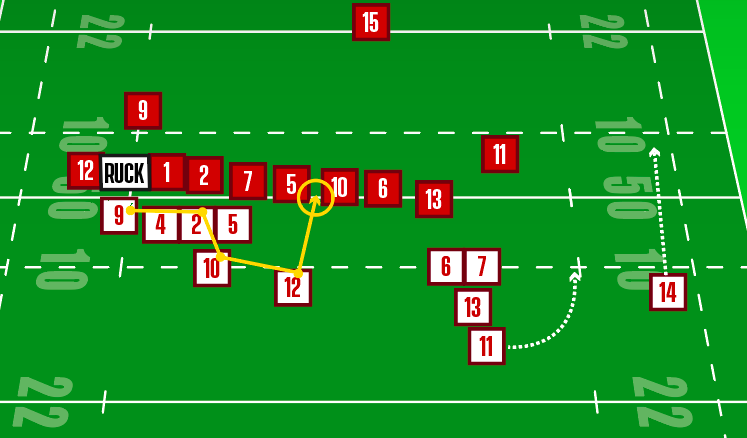 They may not always use this option but it gives Ulster a centrefield ruck option/threat that also has a viable chance of a line break or offloads at the point of contact.

Without McCloskey, Ulster will have to go wide and use the wide breaking ability of Cave with someone like Timoney, Gilroy and Kernohan on the loop overloading the wide area outside Goggin.

You’ll often see Timoney (or another back row other than Deysel) occupying the space in that wide channel and doubling up on that space. Ulster’s main threat in the backline here is the pace of Gilroy and Kernohan, so I think you’ll see them doubling up on each other’s wing wherever possible.

Here’s an example of how this might look off the lineout, but replace Speight – another power loss for Ulster – with Kernohan in this instance.

You’ll notice the relative width that Cooney and Burns get on that lineout scheme too. McBurney was quite comfortable throwing to O’Connor at the tail and that opens up a lot of the width and space that Ulster will want to play with here. That width starts with Cooney and Burns’ ability to run that angle off the set-piece or ruck.

You can get a look at Ulster’s double-layer attack structure here against the Cheetahs.

Addison’s clever use of the kick in this instance created a three-man chase pod in the wide channel and that’s exactly what Ulster will want to use against Munster’s narrow blitz and with Earls and Conway closing the door.

Look for them to try this little gimmick with Gilroy during this game – their double inside bluff.

It’s a clever little move that feints the target of an inside pass to Gilroy coming from deep.

If Ulster can’t drive through the phases close in – and I’d rate Henderson, Deysel and Timoney as their primary carriers – they’ll go for options like this in the outside channel.

In the lineout, Henderson is a key defensive player with an ability to steal the ball in the air and sack mauls almost on his own with his long wingspan and power. Mauling Ulster won’t be easy with Henderson defending on the floor, so I’d expect Munster to try and move him around so he’s the initial maul defender as a lifter, not a jumper. Henderson is a typical middle-line defensive player, which suits his ability to counter-jump but also give him a good look at starting a strong counter-maul. Ideally, we want to hit him in a position like this;

When Henderson is an initial counter-shover rather than the point defender with his hands over the top, Ulster tend to over-shove on Henderson’s side. This is natural, as you want to bolster your best mauler with additional pressure but that can leave Ulster vulnerable to getting pivoted around their strong side push.

Ulster can also be a little vulnerable to overloading the openside of their defence after an infield maul, so look for Munster to drive in towards the posts, land the maul and then attack the shortside with Conway breaking off Mathewson/Carbery.

On their own maul, I would expect O’Connor/Henderson to be the primary build player to keep Henderson’s power going forward. Munster will use O’Mahony along with Beirne and Holland. The Scarlets didn’t seem to rate Ulster’s power from long range all that much four rounds ago with a similar Ulster selection.

Red #4 lost his footing and that gave Ulster a good run up to build momentum but when Scarlets wanted to shut the door, they did so pretty easily. Ulster’s body positions at the front are pretty average here so that really helped Scarlets counter but Ulster shouldn’t be stopped with this much momentum.

The arrival of Dan McFarland to Ulster will do a lot of things but one of the key characteristics of McFarland’s way of going about things is aggression. Ulster are incredibly aggressive with their defensive alignment and press but it can leave them a little prone to a second pair of hands breaking their blitz.

Look at Patchell’s diagonal line across the defence here;

That creates a real pinch on the outside edge of Ulster’s defence. Scarlets’ didn’t use it here but you can see the space that Patchell and Blommetjies had after the drift. They had a two on two isolation with two players over.

Later in the quarter, we saw Ulster caught again in the wide channel.

Much like ourselves, they seem to be happy to give teams the outside and then flow to that space, so long as they don’t get driven up the middle.

Against Scarlets, Ulster had the physical presence of Speight and McCloskey in the outside edge spaces and that kind of power creates difficulties for an attack to work around. You can’t really hit the middle channel or the outside channel with a lot of certainties if you’re running into Speight, McCloskey or Stockdale.

In this game, Ulster won’t have this physicality at the edges and be more likely to either (a) blitz higher and harder to try to win collisions and dictate position while risking getting passed around – see above – or (b) lose that collision and set up an isolation in the wide areas that could see the Ulster inside defence scrambling across the field and their small back three defending a trio of Munster wide attackers.

If I’m prepping for this game, I’d want to work a decent openside position and use Carbery’s pace and deception across the line from first receiver to tempt out that blitz and then see what space arrives outside. With O’Donnell, Goggin and Scannell we have a mobile wider carrying group that can muscle up on the relatively small Ulster outside back division and create space for Earls, Haley and Conway on around the corner.

This should be a Munster win, as long as the set-piece holds to the level that it should across both halves.

I would expect Munster’s four-jumper lineout scheme to be a little more coherent in this game and, just looking at the way we’re set up, I’d expect O’Donnell to have a fairly prominent game almost as a second blindside – a lot of carrying and a lot of first up shots in defence.

If Mathewson and Carbery link as they should, it could be a big win. Munster certainly won’t be lacking for motivation after last week but putting that out onto the field with coherency is another thing entirely.