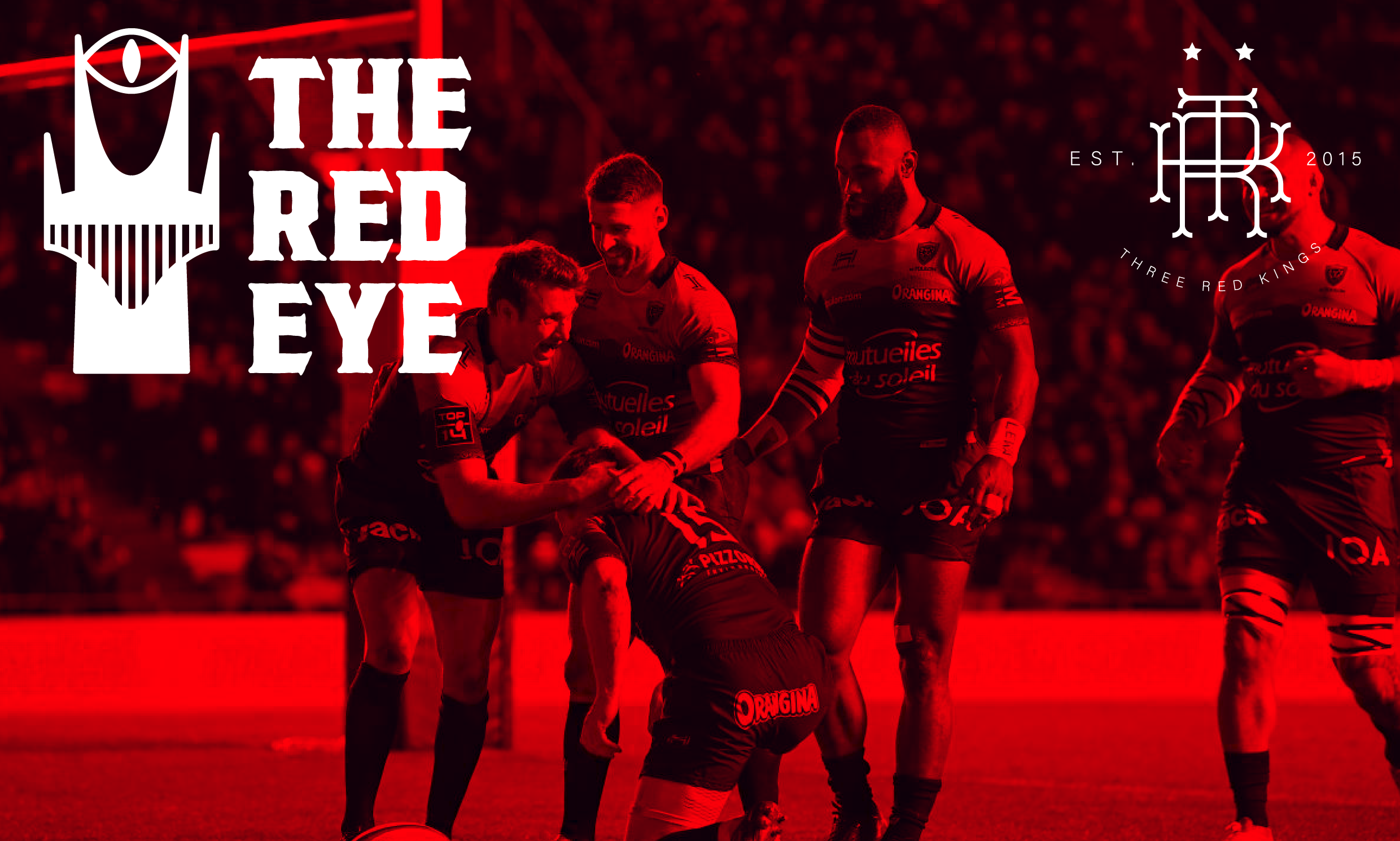 This is knockout rugby in Thomond Park. We can expect a lot of things from Toulon – including the bolshy talk about Thomond Park pre-game – but to win this game they’ll have to come through the fire of Munster playing at home in a European Cup quarter-final. Sure, Munster are down a few guys that probably would have started this game but come quarter past three on Saturday afternoon, none of that will matter.

When that whistle goes, the war begins.

Thomond Park should be rocking, but that’s only a part of the recipe that will take down Toulon.

When you’re playing a team like Toulon, you have to recognise where their power lies and manage it accordingly. For me, Toulon’s biggest advantage in this game is their combination of pace and power in the midfield and outside backs. They have a big pack – sure – but I don’t see them having a massive set piece advantage or a one on one collision advantage if they’re managed correctly. Their backs are an altogether different proposition and as far as I’m concerned, the best way to stop Toulon doing what they do is cutting off the supply to where their main power differential lies.

I’ll get to that later but first, let’s have a look at the teams.

The selection of Jack O’Donoghue at openside might look like a “needs must” selection but I think it’ll play a large part in Munster’s overall game plan. His ability as an aerial counter jumper will be important in this one, as will his ability as an agile, destructive counter-mauler.

Munster will need as much aerial disruption as possible to take away two of Toulon’s main weapons.

The first is Toulon’s strike running power off set-piece will be a real danger in this game. Toulon will look at Munster’s 10/12/13 alignment off the set piece as something they can really target.

They’ll be looking to get Nonu, Bastareud but especially the likes of Tuisova and Radradra running hard into the Munster 10/12 channel off lineout and scrum.

The selection of O’Donoghue gives Munster two excellent counter jumping options that only burn one lifter and that could be a useful way to pressure Toulon’s ability to get their heavy wingers working off at an angle around the tail of the lineout. I thought Scarlets did this quite well by competing on almost every throw. That limited Toulon to playing off balls thrown to the front and that allowed Scarlets’ tail gunners (that’ll be Marshall for Munster) to support the 10 channel and crowd out Nonu and Tuisova when they were used as an option.

If we can squeeze Guirado’s throw – he’s prone to overthrows, especially when Toulon want to throw to the tail for their prefered maul position – we can take away a lot of Toulon’s dynamism off the lineout.

Toulon took the ball at the front to play wide into the centres on these two examples and that pattern generally stands firm for most of the games I’ve seen them play in when they’ve felt a little under pressure in the air.

Off scrum, I’d expect to see this kind of pattern at least once on either side of the field;

Tuisova hits the ball up off 9, the Toulon backrow angle in on ruck support with Nonu and Trinh-Duc floats off to hit Bastareaud or Radradra on the recycle. It can be particularly devasting if Tuisova gets ground into the 10/12 channel like this because it can collapse the outside edge and give Toulon just one wide pass to get the likes of Bastareaud running into space occupied by back three players or support defenders approaching at bad angles.

Toulon will run this against Munster too;

They’ll use Bastareaud to narrow Scannell and Arnold into Keatley and then spring Trinh-Duc into a position where the likes of Ashton or their wingers can attack in space.

The second weapon is Toulon’s maul and their work off the maul. I’d rate it as quite good, physically very strong if a little slow in construction and technical application. That is to say, it’s a little monodirectional when it gets set up and can be repelled with good technical placement on landing given the generally slow nature of their construction.

That said, they are physically very strong once they get the maul in place and one look at the actual size of these guys can be pretty intimidating. I think this aspect of the game is partly why Stephen Archer has got the nod to start in this one, given his strong counter-mauling ability. In fact, Munster have kept the same counter-mauling unit in place for most of our big games this year – GIF Room article here.

Toulon like to use the threat of their maul as a basis for a few feints and narrow side breaks off the back of non-moving mauls.

This looks like a blown throw that works out but look at the movements;

This was a planned gimmick off the lineout to work against the expectations of the lineout defenders. Toulon like to run movements like this quite a bit and they’re quite good at disguising the setup and using their physical threat to “trick” the opposition, especially early on.

The first few lineouts are a big part of a game from a physical tempo point of view and Toulon know that teams will be looking to put a marker down physically. This is when Toulon will look to use this desire for confrontation to take the contest away like the above GIF.

They also like to use “half mauls” to attack the short side.

They use plays like this to bring Escade around the corner against the front lifter with the likes of Guirado and both heavy wingers as support, especially early in the contest.

Starve The Beast, Work The Beast

Toulon’s defensive work on multiphase sets has been a consistent weakness for them over the course of the season, especially in the Champions Cup. Whenever they were forced to defend 5+ phases at pace, the likelihood of a line break or discipline lapse increased incrementally. You might say that such a thing is true of all teams but the selection that Toulon have gone with for this game is particularly vulnerable to it.

The spacing issues start to show after phase 3/4 if you can get any kind of dynamic possession. Munster’s chained fringe carry game could be particularly effective here but the biggest thing is to maintain possession by any means. Munster’s rucking will have to be unbelievable accurate in the initial ruck strike because Nigel Owens will punish any work off the feet or beyond the ruck – as happened quite a bit in the Bath v Toulon game where Owens was the referee. Toulon will be looking to flop over the top in a similar way to what France did against Ireland in Paris in the Six Nations but accurate rucking with good wide ruck patterns (as laid out here last week) could be a good tactic to negate this and get Toulon moving.

That’s another reason why I think O’Donoghue got the nod over Copeland when the decision was being made on our backrow composition – O’Donoghue’s pace, low entry angle and aggression at the ruck will be vital in maintaining possession over the lateral distance that we’ll need to pressure Toulon.

On the one hand, looking at Nonu and Bastareaud’s name on an opposition teamsheet is never a good thing. Could you ask for a more powerful midfield combination? I know that’s a bit Chandler Bing – not my first time being accused of that – but it’s genuine. One is a two time World Cup-winning All Black and the other is a multi-time European Cup-winning midfielder who changed the definition of what a “ball carrying #13” should and even could be.

They are as threatening a midfield duo as there is in the club game but that isn’t to say that they don’t have vulnerabilities.

On multiphase possession, Bastareud and Nonu tend to end up defending quite a lot of “edge space” if you cluster heavy phases on one side of the pitch. 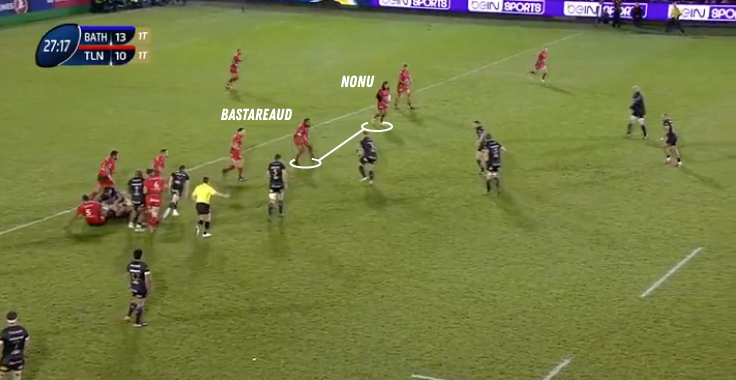 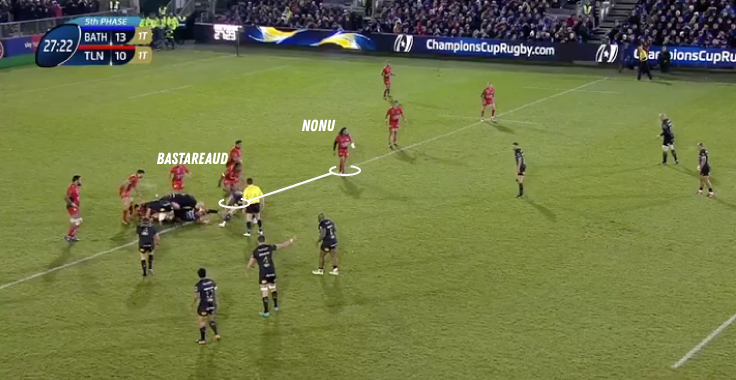 When you cycle through their forward defence pattern – usually within 1-4 phases off of set piece – you can get a crack at Nonu and Bastareaud in this kind of space. Why do they have this space? Neither man is the quickest when it comes to covering lateral space so they tend to give themselves shortcuts on the outside.

That’s why space like this gets preserved despite the ball moving well away from the previous ruck;

This odd spacing on certain plays is a side effect of both men’s biggest physical advantage – their size and power. It shows itself in scenarios like the above. But this isn’t the only one.

With enough pace on the ball, Bastareaud, in particular, can be isolated in quite a bit of space by running hard decoy lines at Trinc-Duc.

Nonu is prone to overcompensating for Trinh-Duc defensively. That exposes Bastareaud in a lot of space and it happens a lot more than you’d think would be possible.

The same thing happens off lineout.

You have to earn Toulon’s respect in the carry to expose this situation, but do that and the space will be there.

The presence of Chris Aston as fullback gives Toulon some excellent second layer attacking options but exposes them a little under the high ball. I’d be comfortable saying that all of Toulon’s back three are a little vulnerable under the high ball and being turned across the shoulder. Keatley and Scannell will have huge responsibility to get good “wiper” kicks across the top of both wingers. Murray’s box kicking could find a great return targeting the space behind Bastareaud but, as ever, loose kicking will be punished by these guys as ruthlessly as you might expect.

The selection of Ashton at 15 means that Toulon only have one kicking option and, as a result, one exit option. That puts a lot of the kicking load on their flyhalf. Targetting Trinh-Duc under the high ball in the backfield could be a good territory getter if we pressure his reception and then force their back three or Nonu to exit.

This game will be difficult.

As challenges go, this is about as big as it gets. The Thomond Park effect will not be enough on its own to win but it can play a part – under high balls, in the maul, in the scrum and on defensive sets. I think Munster will have an edge in the maul and in the scrum to the point where it might surprise people. Our selection seems to place a big emphasis on the final twenty minutes from a set piece perspective. Toulon have been excellent in finishing out games, especially in the Champions Cup and that has largely been on the back of scrum and maul dominance that has grown as the game’s dragged on.

Ideally, Munster will be bringing Scannell, Cronin, Ryan and Grobler on for the last 20/25 minutes so, as power replacements go, I think we’re well set to manage this game well as it drifts into the championship minutes. Toulon have been slow starters this season so if we start well, we could well shock them out of the contest early on but – again – we’ll need to play as well as we have all season to do it.

If we starve them of possession, force them to infringe, stay spotless at the ruck while maximising aggression and retention, we’ll have every chance. Thomond Park will, hopefully, do the rest.