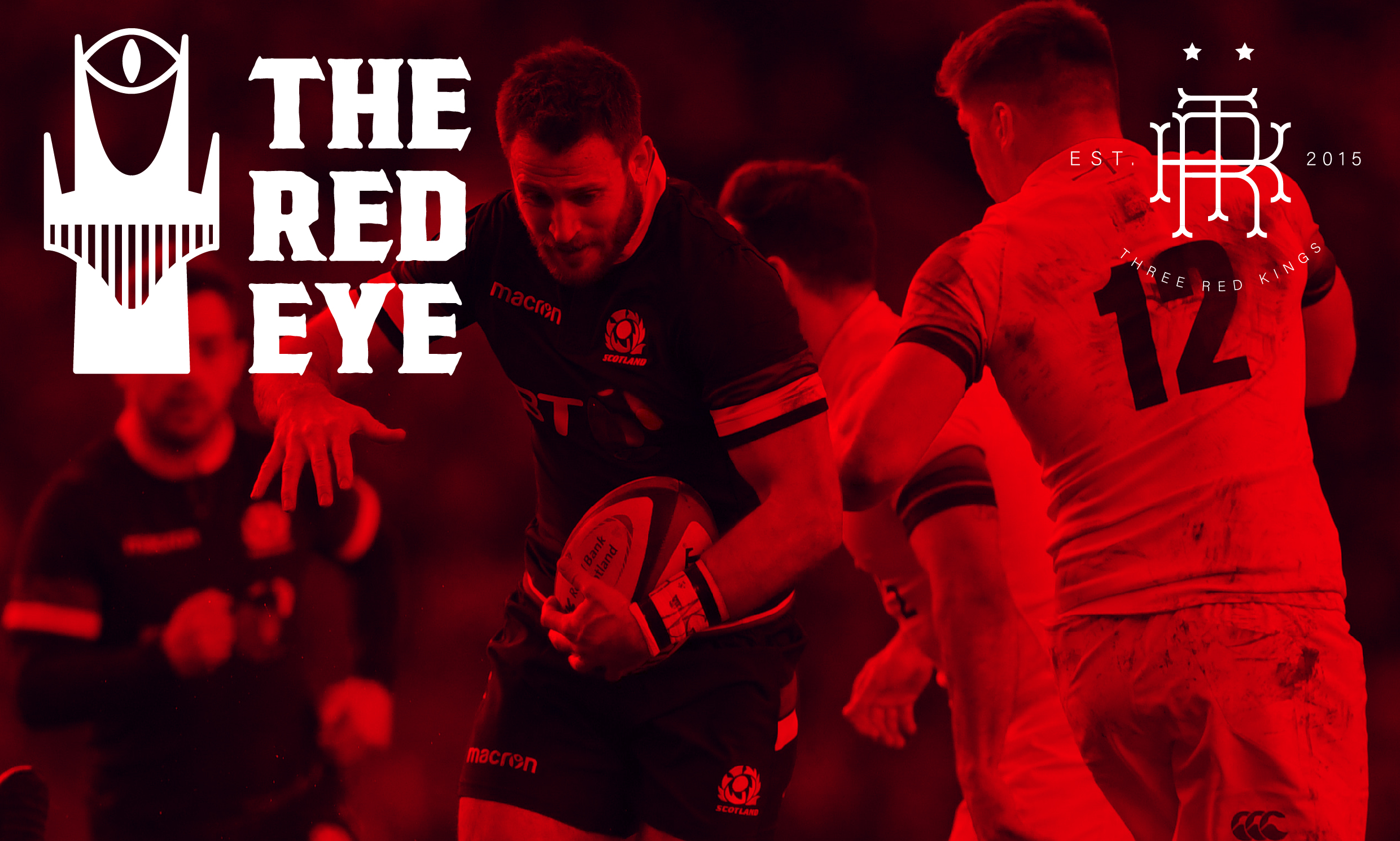 Scotland are almost perfectly attuned to playing to their strengths.

Scotland have no such worries about identity. They, through the work of Vern Cotter and Gregor Townsend, have found a style of rugby that plays into their current strengths and tries to mitigate their weaknesses.

The way they structure their play is based on three truths:

These three things feed into what Scotland try to do on the ball. This translates to a need to play a wider alignment ruck to ruck and pass to pass, at a quicker pace, and with a high ball in play time to pit their fitness and mobility against yours – unless they are badly losing the possession battle.

All of these elements tie together to highlight Scotland’s overall “intention” when they have possession. Everything they do with the ball will serve these principles.

To the Scots, their ideal wide ruck or off centre set-piece is almost the start of a race.

Look at this pattern off a lineout;

That’s three long-range passes to get the ball to the far touchline as quickly as they possibly can. Why do they do this, rather than hit up in the midfield? Because they want to get their advantages in play. “Are your forwards fit enough and quick enough to catch us on the other side of the pitch? See you over there.”

That’s the Scottish looking to highlight a strength but it’s also hiding a weakness – none of the guys they could stack outside the lineout have the dynamism to win that gain line up the middle of the pitch. Promote strength, hide weakness.

Here’s the picture they found after this wide play hit the deck; 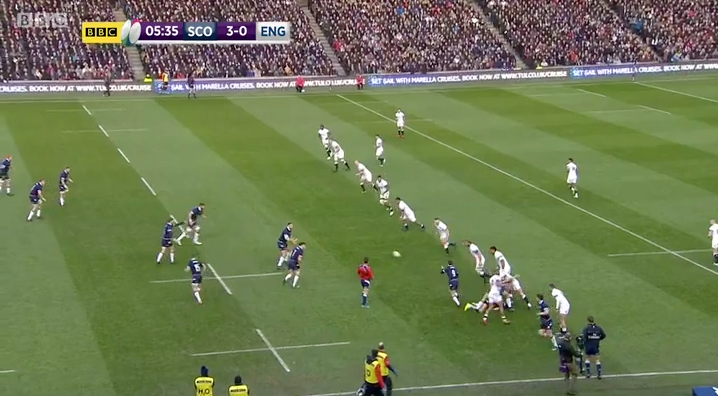 Does that English alignment look familiar?

Once Scotland make a wide strike like this, they’ll look to come back across the pitch with one or two probing forward carries that probably won’t make much ground but will, hopefully, get good tempo on the recycle. A lot of their best attacks are based on this small gainline, quick recycle style. They did that reasonably well in this instance but you’ll see how vulnerable they were to a steal on the second ruck that involved Russell tipping the ball back inside for Horne.

Lawes was another half-second away from getting the reward from Owens here and he can feel slightly hard done given the speed that Owens blew up some Scottish steals before and after this.

A key aspect to defending against Scotland and Finn Russell can be seen in Cole’s actions prior to Russell getting possession on the above GIF;

That hard blitz does enough to cut off the outside pass option from Russell and force him to come back inside to the English heavy cover. I think Ireland will look to disrupt Scotland in a similar way because it allows you to retain that narrow alignment and pressure Russell – two desirable traits to have against Scotland.

The way Scotland cleaned up after this slow second ruck reveals their dependence on width as an attacking strategy. Look at what happened;

Look at the width on that pass from Russell to McInally! The pass to Huw Jones gets a lot of praise – and rightly so – but this pass here was a fairly impressive piece of handling. It wasn’t for show either, as this was exactly what they needed on this phase to get them outside of England’s edge defence. 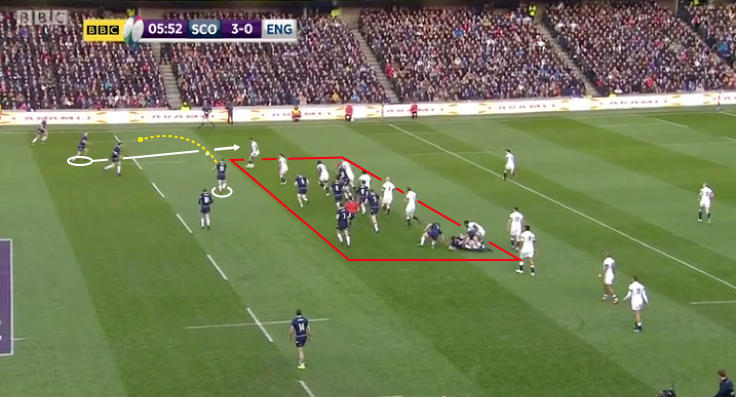 This pass has to get outside the last English defender because even with a 3-1 overlap, Scotland will be wary of the English cover getting across and crushing them on the next phase because of the slow pace of that second ruck.

Look at what happens when McInally gets scragged on the edge;

After a few more wide passes – look at the one Laidlaw threw to McInally – Scotland end up getting beaten on the gainline and robbed on the floor by Robshaw. The ball slowed down and Scotland were forced to narrow their carrying routes and their main creative outlets dropped well away from the gain line.

When you get Scotland lining up inside your edge defender, they’re automatically in a weaker position because they don’t have the forward grunt to speed up this ball in close quarters (remember, the first rucks at the start of this sequence were on the opposite side of the field to the lineout that started them) and they’re too deep from the gainline to generate the width they need.

Scotland want quick ball and the suggestion of an overlap on the last defender so they can attack with width and pace.

Look at what happens when they get that quick ruck;

They will put pace on the ball and look to get the likes of Hogg, Maitland and Jones in possession with space to do damage. Pay attention to how flat they are to the gain line when they’re getting the ball wide.

Like I wrote earlier, they’ll often treat those wide rucks as the starting line of a race because their fowards will win that race more often than not. They’ll see how far they can move your forwards across the pitch before attacking back against the grain and then launching an overlap attack back where the attack started if they don’t breakaway earlier in the sequence.

When you slow their ruck ball consistently, you’ll force them into riskier passes or forward exchanges that they tend to lose man on man and metre for metre more often than not.

What must Ireland do?

We have to work Scotland’s weaknesses and play the type of game that works to our strengths. What do Ireland have? Very strong forward defenders. What do we want? Scotland losing three forwards per ruck on their possession as they struggle to get the ball back to Russell or Horne at first receiver. We have to be aggressive when defending Scotland because Russell can be “rattled” in the same way that Ireland managed to do to Sanchez against Argentina.

We have to slow the game down, force Scotland to burn three forwards per ruck to a max two Irish tacklers and then use a narrow D blitzer on the outside shoulder of the first receiver to pressure the wide pass option, and force Scotland to come back inside.

That allows us to use our narrow alignment, target the “supply route” between their 9, 10, 12 and 13 and force them into collisions they don’t want with the likes of Furlong, Healy, Ryan, Stander, Leavy and O’Mahony.

We’ll need to use our back three to “shut the door” on Scotland’s wide play, guard against the kick over the top and watch for the reverse ball to Maitland near the fringe of the ruck.

A lot of talk has gone into the breakdown battle in this game. I spoke about what Ireland should do on our ball, but Wales showed the way to go with Scotland on their ball. Show them absolutely no respect whatsoever.

Look at the mess Shingler makes of this wide ruck all on his own;

He’s bullying Barclay, Watson and Gray on this ruck, and that slows the Scottish possession right down and forces them to try and “restart” the pace through the forwards. This is where Scotland fall down – the likes of Barclay, Watson, Gray, Gilchrist and Watson just don’t have the grunt to commit defensive numbers. Every time the ball gets slowed or they lose the gain line, it increases the pressure on their first reciever to make something happen.

Scotland lose three forwards to the rucks following straight on from the one Shingler ruined – to just one Welsh tackler on each. When they get the ball wide to Russell, he’s running into red shirts and looking to ship the ball on to avoid taking contact. We can force this kind of scenario and expose Russell to the likes of Aki and Leavy in the wider channels.

Any time that we can get hard shoulders into Russell, we’ll lower his effectiveness incrementally.

If beat the Scots up on their own possession and narrow their wide passing game with intelligent blitzing, we’ll do what Leinster and Munster have done to Glasgow teams in the last two Champions’ Cup campaigns – gobble their forwards up and then pick off the backs behind the gain line.

Scotland are a dangerous side but an unproven one. They’re dangerous in Murrayfield but it’s been their work away from Edinburgh that has repeatedly undone them over the past few years. I think Ireland’s pack should have too much for them as long as we impose our game on them early. We need to starve them of the ball, hurt them on their possession and punish them at the set-piece. If we do that well enough, there’s a bonus point win here. If we don’t… well, we all remember Murrayfield 2017, don’t we?

I’ll go over the Ireland team selection in detail in the Blood & Thunder Podcast.