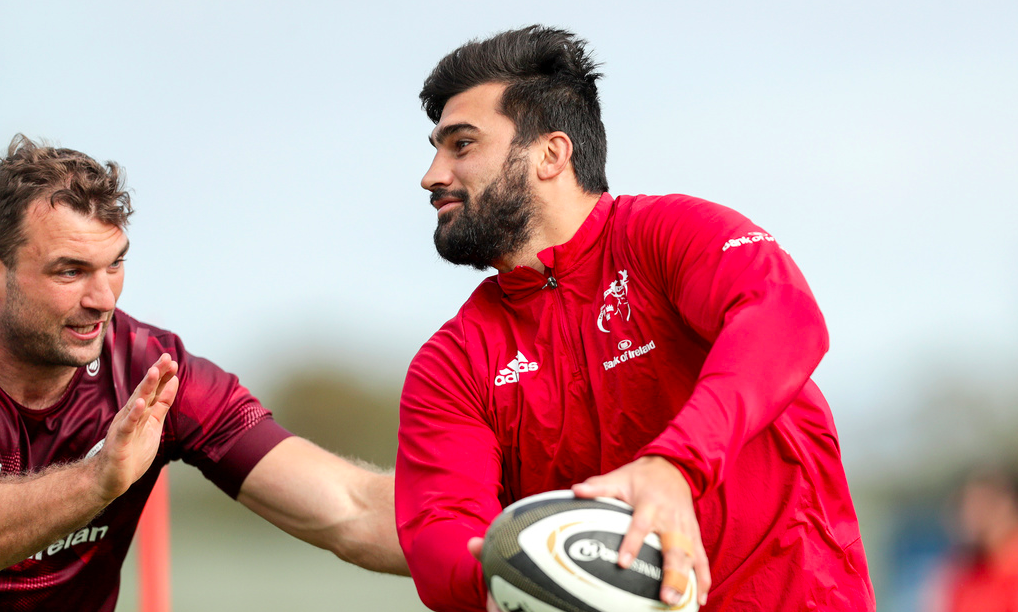 By Tom Savage7 min read
The last time Munster started a league campaign in Llanelli was the 2016/2017 campaign. Rassie Erasmus was in the coaching box and Munster scored a big away win. That season would live long in the memory for reasons outside of what happens inside the white lines but, as you likely remember, it ended in an unsuccessfully contested PRO12 final in the Aviva Stadium against the same opposition.

Expectations for that season were pretty low if I recall correctly. The poor finish in both league and Europe the year before saw to that but the general expectation was that Munster would have to improve. That’s a strange kind pressure all of its own. Before that 2016/17 season, Billy Holland spoke about the “no-win” situation of needing to win on the last day of the then PRO12 season to even qualify for the Champions Cup (against Scarlets yet again). Win, Holland said, and you’re disgracing Munster Rugby by even being in the position to have to win the game in the first place. Lose, and you disgrace Munster Rugby in a way that would be unfathomable – a season without elite-level European rugby.

As we know, Munster went on to re-establish their status as a European contender that year with statement wins in both league and Europe under the guidance of Rassie Erasmus before ultimately falling short after a deep run in both competitions. 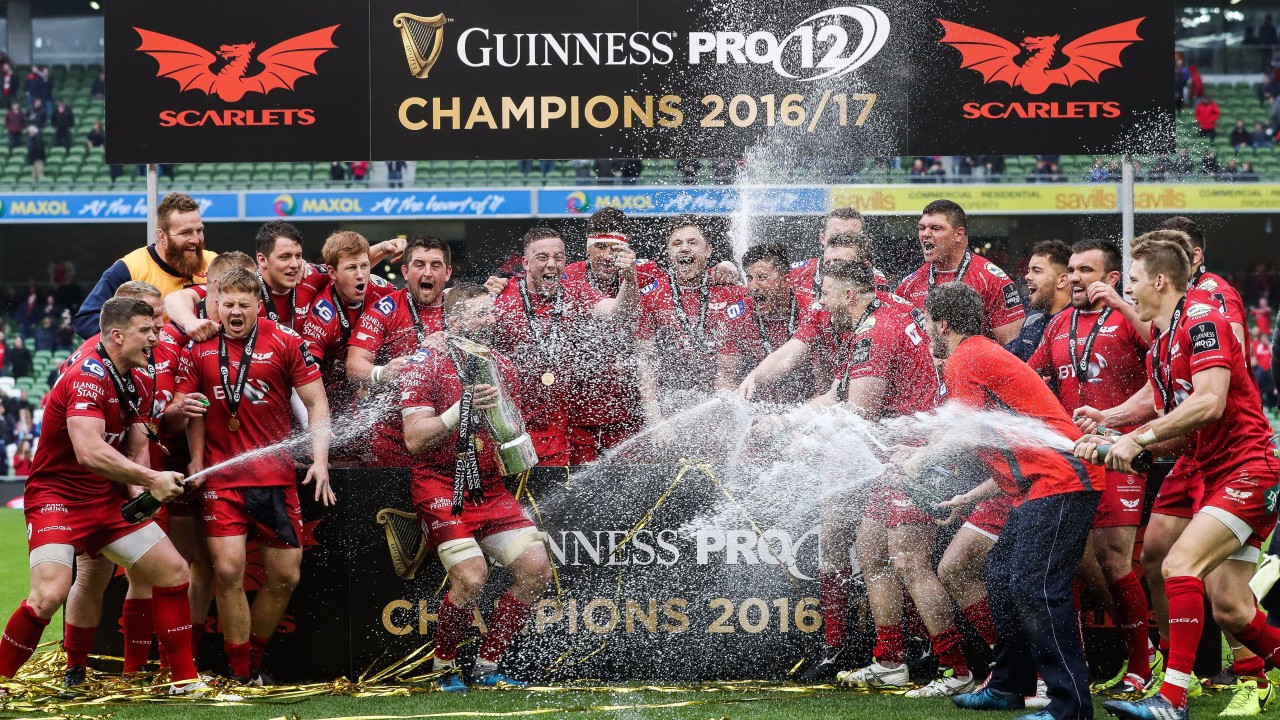 In a lot of ways, we’ve been untangling the aftermath of that season for the last three years.

When Erasmus and Nienaber announced they’d be leaving for the Springboks mid-way through 2017/18 it required a change of head coach and defence coach halfway through the season. There’s a reason why rugby clubs, as a general rule, do not tend to make coaching changes mid-way through a season if they can help it at all because of the snarl-up it creates from a cohesion and planning perspective. Coaches do the majority of their on-field building in the eight weeks of the preseason – this goes double for a new coach bedding in any kind of new system – and that’s before you get into the cycle of retention and recruitment that is the metaphorical lungs of a professional sports set up.

The season after the mid-way switch to Van Graan, we started the new term with a brand new, game plan defining flyhalf in Joey Carbery, a head coach entering his first full pre-season and ended it with our attack coach and forward coach declining new contracts, which meant Munster would have to hire two system-defining replacement coaches during the preseason in a World Cup year that would ultimately get derailed by a once in a century global pandemic.

This season, after three seasons of untangling, Munster can finally say that they have an established, un-disrupted coaching group, stability in key playmaking positions (in that we know that Carbery will likely play no part in the first half of the season at least), world-class talent added in key areas and a core of young, eminently ready players ready to march up the depth chart.

With that, Munster face into a different kind of pressure this season – to succeed.

I wouldn’t go so far as to say it’s “shit or bust” for Van Graan and this senior group of Munster players but I’ll put it like this – when you sign two World Cup winners (yes, I know RG is injured), you put a target on your back for others to knock you down a peg.

When you finish in a PRO14 semi-final three seasons in a row, the senior players in the squad have to put a target on their own backs to either move beyond that level or accept that they can’t and be moved on in increments where contracting cycles allow.

The secret to any successful sports franchise is the unpleasant reality of “win, or we’ll find someone who can”. This is the cycle that Munster enters into this season. It’s time to win. It’s at least time to start getting to finals. You hear people talk about how failure is “not an option” ahead of a season like this. That’s 100% incorrect. Failure is the most readily available option there is but the

This opening block of games against our chief in-conference rivals (away to Scarlets this weekend and at home to Edinburgh next week) gives Van Graan and his coaching staff an opportunity to strike early, killer blows in the race for a home semi-final.

Win these first two games and the rest of the season will flow that little bit easier. Let’s have a look at the match-day squad selected to do so. 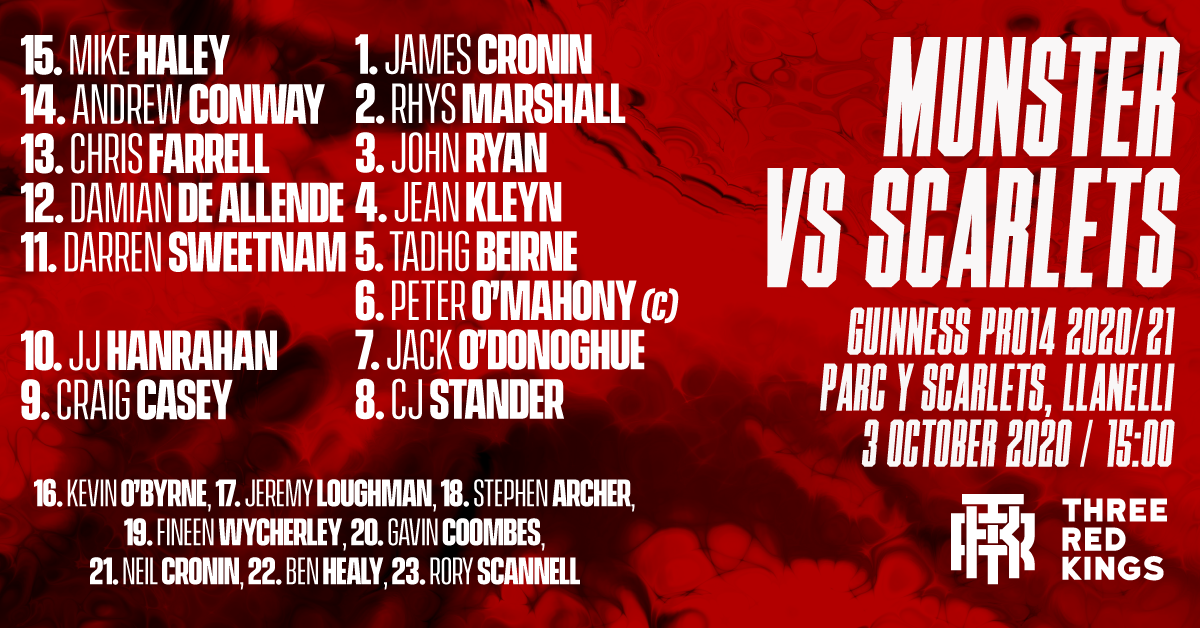 Depending on where you get your weather – I prefer looking at the patterns in the moss on the ditch outside my house, personally – this game is likely to be played out in consistent rain and with a stiff breeze blowing across the pitch. All you really needed to do was to realise that this game was being played in Llanelli in October and the forecast would have been obvious.

What does this mean for the game? Well, if the forecast holds, it means that the kicking game, lineout and tight collision winning will become incrementally more important than they otherwise might have been.

Our last game before the lockdown was against the Scarlets in Thomond Park and it was largely played out in the same conditions but the strength of the selections has changed considerably.

I watched Scarlets play Toulon in the European Challenge Cup quarter-final a few weeks ago in heavy enough underfoot conditions and I felt they struggled to bring their best-attacking game as a result. A lot of that came down to selection, in my opinion, as they looked for gain line parity against a Toulon side they expected to give up a bit of size to. Neither side really impressed all that much, for me, and I think that was largely down to the physical pressure Scarlets were under and felt they had to react to.

Their selection for this game looks like it’s aimed at the same overall concept as that Toulon game – match the opposition physically and look to play off  I’d expect Ball, Kalamafoni and Owens to be Scarlets primary forward ball carriers with their main phase play concept being a 3-2-X central forward alignment.

What do I mean by this?

Have a look at this phase play shape used by Scarlets against Cardiff during the PRO14 restart.

You can see the pod shape in the layers of the Scarlets’ attack. In this instance, it’s a pretty clear 3-2-2 with Jones, Halfpenny and Evans acting as handling/breaking options behind each pod. 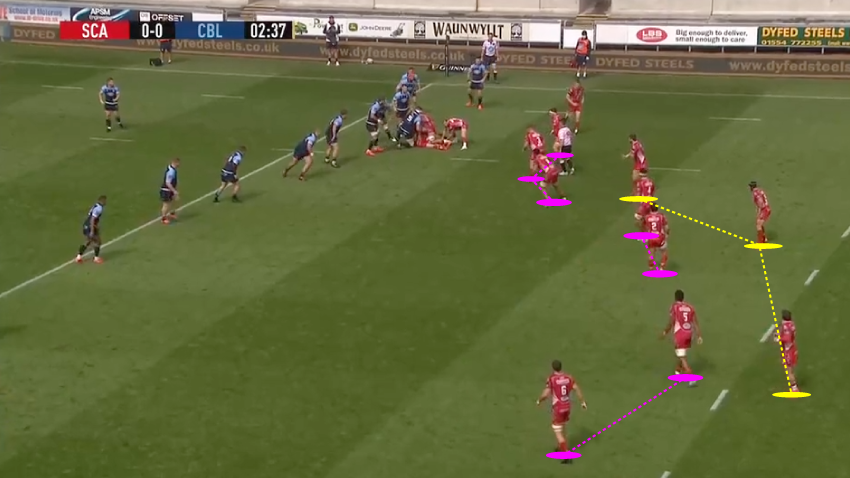 You’ll likely see Davies and Hughes involved in an overload on one of the Two pods but they were involved in the previous phase on this occasion and are out of the play. This rough shape is a good guide to how Scarlets like to attack.

The two-man pod in the central position is an important shape for them, as they have a few different plays they like to use off the back of it. Have a look at this example against Toulon when they were able to keep their midfield alive on the play.

The screen splits to open up an overload between the midfield, full-back, wide winger and wing forward for the Scarlets but the key to this is Jones and Williams looping behind the screen as paired runners. 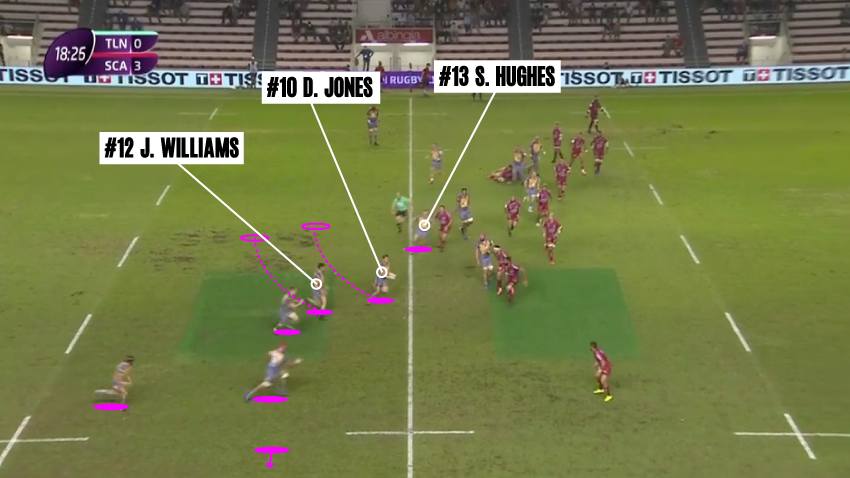 Steff Hughes takes the ball off #9 and picks out Jones through the screen to open up a big overload for the Scarlets in the wide channels (Ken Owens is part of the wide two-pod with Thomson but he’s off-screen). That paired running action by Jones with a variety of other backs makes up a big portion of Scarlets wide work when they use that 3-2-2 shape.

Have a look at him run a shortened version of it here.

Halfpenny is the paired runner on this play but he isn’t where Jones expected him to be. The pullback option to the paired runner is Jones go-to if opposition teams start shooting on him beyond the two-man screen. It didn’t work on this occasion but you can see the intent.

The wrinkle here is that this came against the grain. The three-man pod secured the ball in a central position so that the Scarlets could break back the other way where they had the pre-called screens in place. Jones and Halfpenny feinted the same way play before the ball recycled before breaking back to create the overlap.

From a defensive POV, the important part is to stop and slow Scarlets three-man set ups to force them to reset. Gainline dominance will be crucial here – I mean, it always is – but the jackal threat of Cronin, O’Mahony, Beirne and Stander will be crucial in establishing a viable threat on their initial setups to draw their wider 2-2 set up closer to the ruck and prevent Jones and whoever from sliding across the field. A relatively high outside press by De Allende, Farrell and Sweetnam/Conway will be important in encouraging Scarlets back inside for our jackals to attack.

Whoever gets the most traction at the defensive breakdown will have an immediate leg up in this contest. It’s all set up for Stander, O’Mahony and Beirne to have big games over the ball and at the set-piece with Coombes/Wycherley playing a big ball-carrying and physical pressure role off the bench.