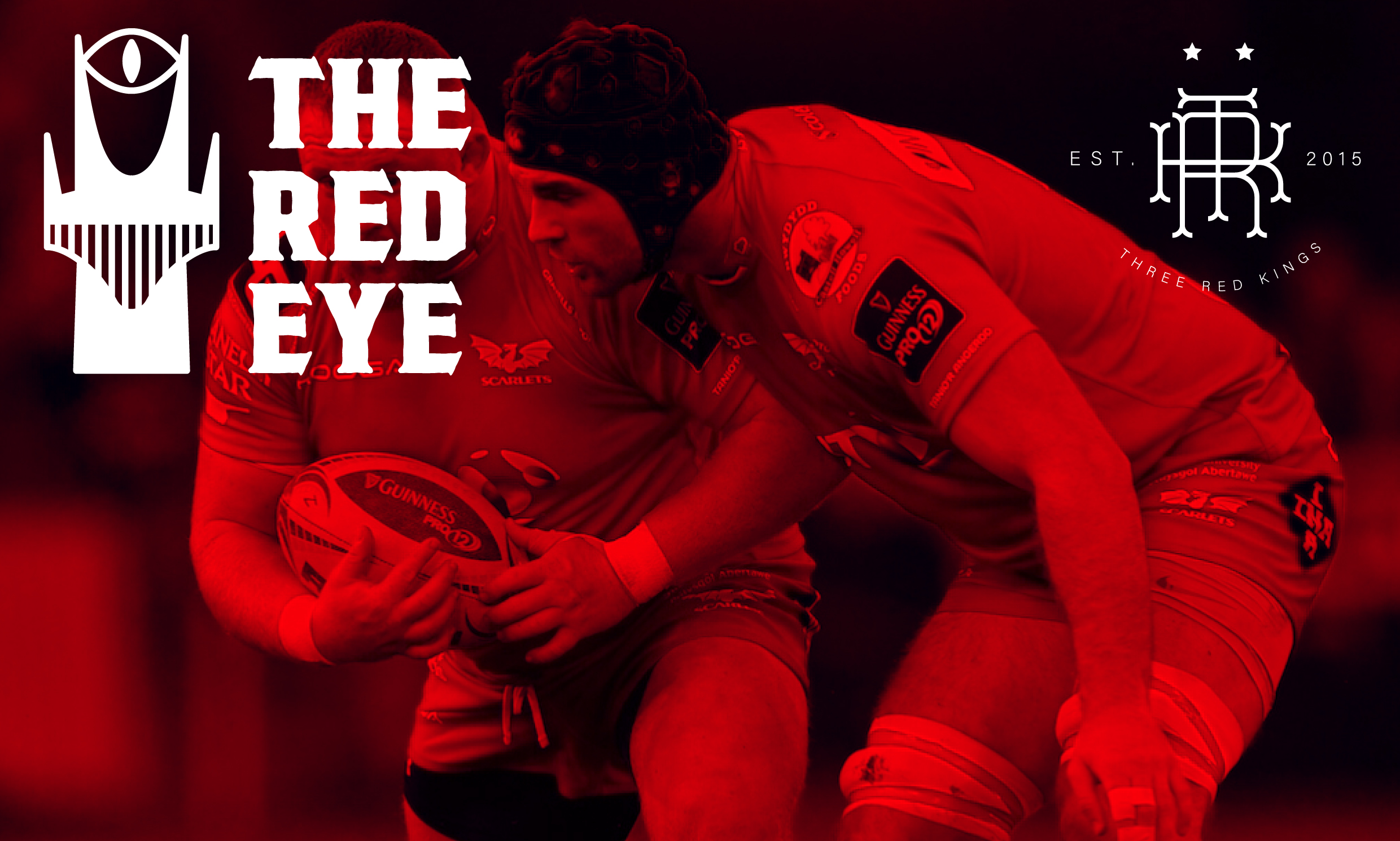 The challenge posed by Scarlets is up there with the most arduous available in the PRO14.

It’s not just that they have excellent players – and they do – it’s that the players they do have are drenched in the “style” of rugby that has propelled them to a home European Champions Cup quarter-final next week, alternating top of Conference B with Leinster and, last season, the last Guinness PRO12 trophy. You might remember that game. I certainly can’t forget it. I’ve watched it 8 times in the interim between then and now. Every time I watch it back, the shock of that opening 30-minute blast remains the same. We were scorched, man. Call it “end of season fatigue”, call it “a lack of energy and accuracy”, you can call it what you like but the reality of it is, Scarlets gobbled up every single error that Munster made and punished us ruthlessly.

As a display of attacking quality in transition – off kick turnover and regular turnover – that PRO12 final performance has few peers. The new conference system of the PRO14 has meant that Munster and Scarlets have not played each other since last year’s final and we meet this weekend in a state of flux. The West Walians have broadly continued the form that won them the trophy last season, with a few stand out performances in both Europe and in the PRO14. Munster, on the other hand, have struggled for consistency with results, performances and, more recently, injuries.

That largely informs the context of the game this weekend. Scarlets are looking to build cohesion ahead of La Rochelle with a lot of test guys rotated back into their squad while Munster are going as strong as we dare with some positions so thin numbers wise you can see the bone through the skin.

But does that mean that Munster have insurmountable odds to overcome in this game?

This is Thomond Park. Scarlets might have gone stronger than we have team selection wise but, like any side with a particular style, they can be attacked and beaten.

Let’s have a look at who’s going to try to do the job.

You can’t look at Scarlets with any kind of detail without noticing how good they are at the breakdown. Tadhg Beirne is an obvious standout in the second row in this aspect of the game but he’s joined by Shingler, James Davies and Boyde who are all skilled operators over the ball. The Scarlets are absolutely lethal when playing on turnover ball and they are amongst the very best in Europe at facilitating that scenario, be it in the tight exchanges or the loose.

Some of these examples lead to turnovers, some were close, but all of them show their mentality, physical ability and decision making on what rucks they want to attack;

You’ll see Scarlets attacking rucks all over the pitch, in all the channels. They are supremely skilled at it. Like all teams with a particular set of skills, they have a plethora of little gimmicks that allow those skills to shine. On the first three GIFs, you’ll see Scarlets hinging into Leinster’s clean out lanes after the tackle to disrupt the ruck support on any breakdown with a bit of separation on it;

Those little half-seconds won here and there give guys like Beirne the time and space they need to work.

To combat this, the instinctive thing to do would be to play off #9 and attack in narrow, tight phases of one carrier/two set cleaners to prevent Scarlets from getting over the ball.

You’d cycle your carrying pods in narrow channels off the preceding ruck looking for dominant gain line or Scarlets committing numbers. The 10/12 (or 15) would then work off the space created to try and engineer a wider break.

I’m not saying that this kind of alignment wouldn’t work – it would certainly be effective with good forward tempo deep enough inside the Scarlets 22 – but playing like this for extended phases between the 22s is a recipe for disaster against Scarlets. Their ability to turn over the ball in all kinds of circumstances makes every attacking ruck a dangerous prospect, let alone upping the potential cost of spilt balls in contact or on the floor.

The narrower you’re aligned in attack, the worse you’ll be exposed on a turnover against the Scarlets be it right away, or within one or two recycles.

They will go wide at the first invitation and they are perfectly set up to get that ball into the parts of the pitch that provide the most amount of disruption to attack with their pacey, steppy, elusive wingers.

In a lot of ways, attacking narrow against the Scarlets suits them down to the ground.

Scarlets know what they’re good at and, crucially, what they’re weak at and have a system that’s perfectly suited to facilitate what they want to do on a rugby pitch.

Scarlets know that nominally “bigger” teams will try to plough through them off #9 so, defensively, they align quite narrow off most defensive rucks. 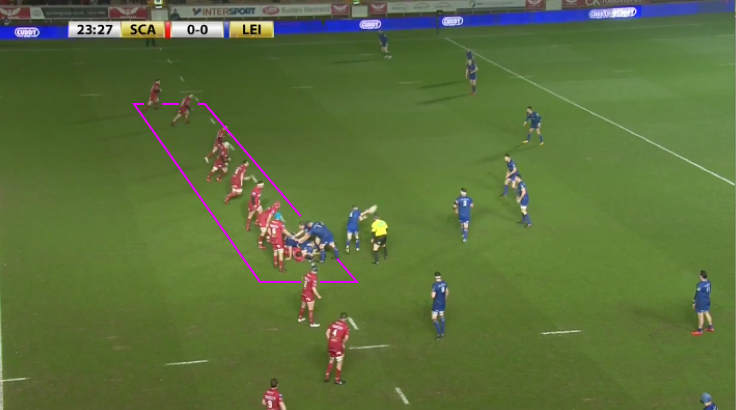 This gives them tight protection close to the ruck, multi-man tackling options, disrupting bodies to swing beyond the tackle and, of course, jackaling options on any ruck that strays too far from support.

Leinster ID’d this tendency and tried to attack them with cross-field kicks and kick through plays, to mixed success.

That cross-field option should be there a lot if Munster can hang onto possession for a few phases. Scarlets give up a fair bit of space on their outside edge to facilitate their turnover game, so accurate kicking could unlock cross-field opportunities or possession pressure where the likes of Nash, Arnold and Wootton can pressure the likes of Varndell, Williams and Evans with their backs to the Munster posts.

That narrow Scarlets alignment is also vulnerable to being hit hard in the second channel. 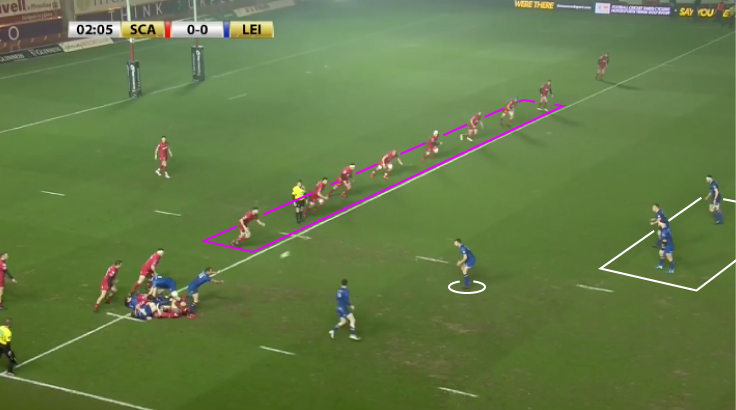 Leinster worked this quite well by widening their ruck alignment when attacking Scarlets.

They still used a tight three-man carrying pod with one designated cleaner and two support options, but they spaced out the impact points on the Scarlets defensive line. This increased the defensive risk for Scarlets and disincentivised jackal attempts.

This is where Scarlets want to be attacked because they can reasonably expect to defend the initial charge and have back up numbers to flood the fringes, which increases the chance of a Beirne or Davies getting over the ball and disrupting. 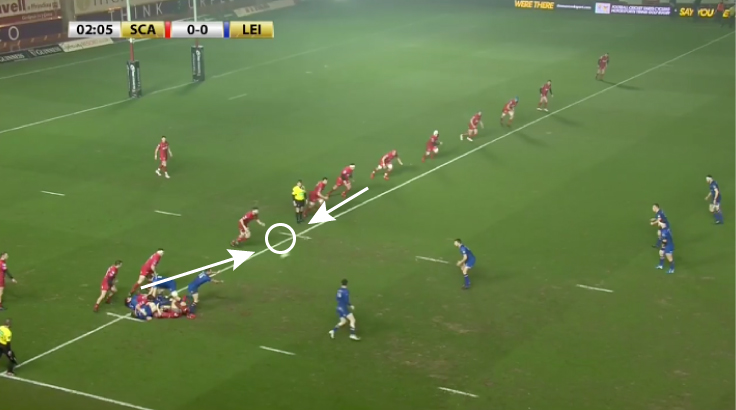 Where I think you want to get at Scarlets off a wide ruck is here; 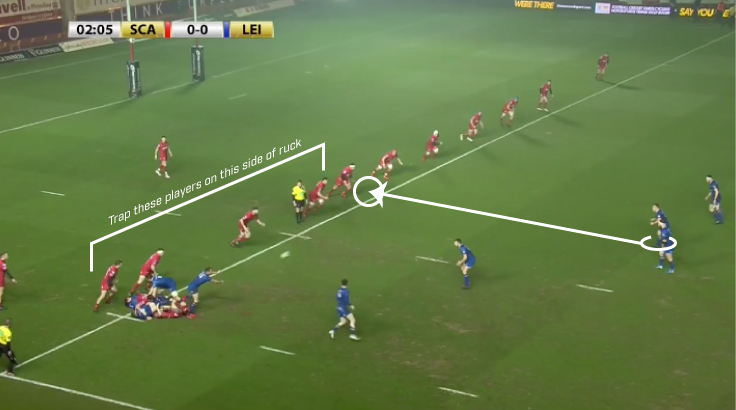 This ruck placement will trap enough Scarlets on the blindside that you can attack the next phase in exactly the same way, but with a better look at a disrupted Scarlets line. 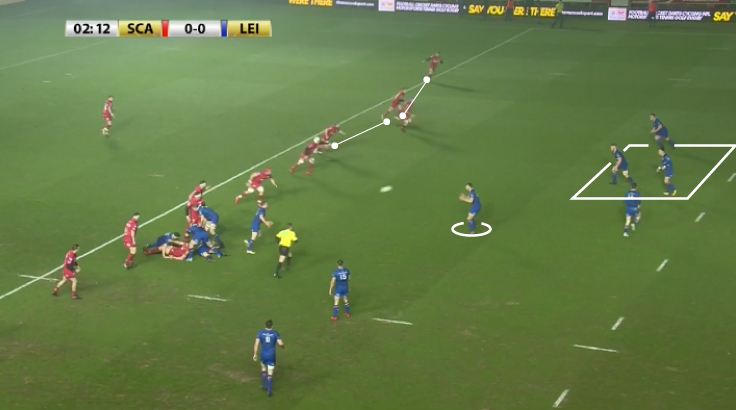 The same pattern is there – a pod of three heavy carriers waiting in midfield being stitched together by #10 and with a winger rotating behind.

Leinster decided to take the kick option off this phase – I think Byrne was put off by Scarlets line speed – but you can see the spacing that this wider ruck alignment produced.

The kick wasn’t a bad option here given how patchy Scarlets were on the edge, but look at the lateral space they had to fill if this went to another ruck. 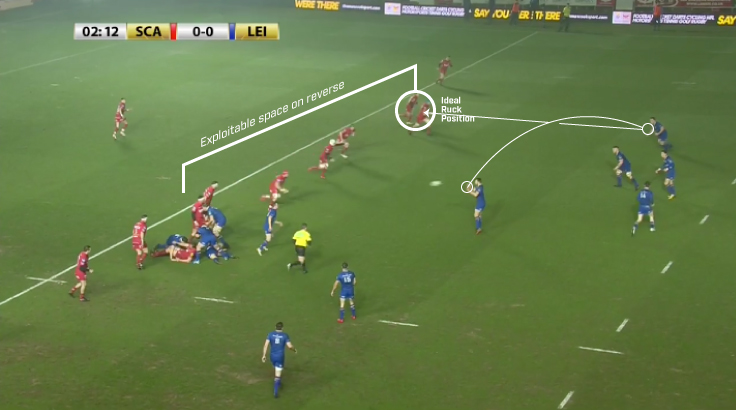 Obviously, this requires an ability to stick together a series of passes that beat Scarlets line speed and maintain possession once you take contact but this kind of alignment takes away a lot of the risk of running a lot of phases against the PRO12 champions.

Phase 1 and 2 come back into play on the reverse if Phase 3 can hold onto the ball. We’ve got a ballplayer at 12 and a flyhalf at 15 – why not use them?

Put a bit of pace on these wide alignments and you can start biting into Scarlets in a way that’ll hurt them.

Like every other side, they’re vulnerable when they give up quick ball and gain line. A wider alignment increases the chances for the likes of Kilcoyne, Kleyn, O’Donnell and Copeland to get good one on ones but the ruck support has to – has to – be accurate or Scarlets will pick us apart on turnover.

The usual work-ons apply here too – we need to improve our maul setups and our running off the break. Kicking loosely to Steph Evans is still as bad an idea as it was last week so one of our three kickers need to make sure anything that goes down the line from loose play stays there.

There’s probably a bit of joy to be had in targeting Varndell with kicks on the turn and Evans under box kicks but the risk here is that our kickers aren’t working with the accuracy that they need to be successful. It is a high-risk play on a dry night, as this is predicted to be, so I wouldn’t expect to see a lot of box kicking. Cross-field kicks are much more likely and will give Calvin Nash an easier job against some serious wing opposition.

It won’t be easy but Munster have the wherewithal to get the win here if we bring the accuracy that we sorely lacked last week.