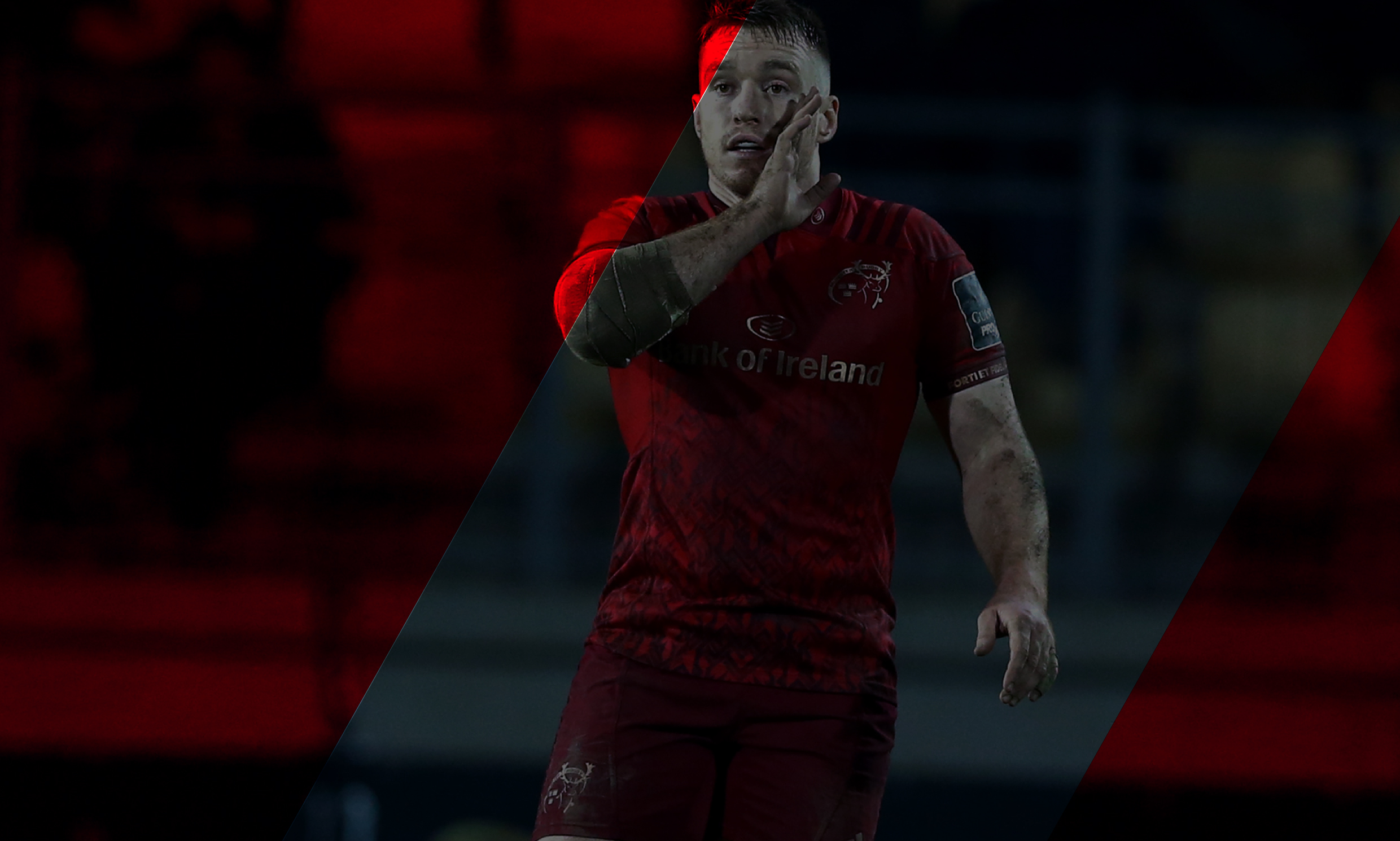 This week will decide a lot.

Munster travel over to the Scarlets with a one-point lead at the top of Conference A and the knowledge that any kind of win will put them firmly in the box seat as the regular PRO14 season draws to a close. Win this, and Munster will have three home games in the last four rounds to hammer home top spot and tick off a squad goal they’ll have targetted in preseason – finish top, get a home semi-final, make life easier for yourself on the road to winning a trophy.

We saw last year that a home quarter-final in Conference A of the PRO14 leads to one place if you manage to win it – the RDS. And while Munster will back themselves to get a result there if need be, ideally when you play Leinster you want it to be in a final. We saw last year how difficult it is to win an away semi-final in Dublin, so avoiding Leinster until the last day of the season in Glasgow is imperative. Glasgow, though, are breathing down Munster’s collective neck as the finish line enters the view. Over the last 10 rounds, Munster have outscored Glasgow by 11 points if we look at match points gained and that explains how Glasgow’s early season lead (8 points at one stage) has been gradually reeled in. That’s a testament to Munster only losing one game in that period (away to Ulster) and picking up a fine rake of bonus points at home. Glasgow, on the other hand, had a very stick Christmas period that saw them lose twice to Edinburgh and then away to Treviso.

It’s tight at the top, essentially. Any slip-ups could be costly, especially with a one-point lead. Both Munster and Glasgow are all but guaranteed a playoff spot at this stage but avoiding that home quarter-final (and extra game) is key. Coaches all over the PRO14 will be working out what’s required over the next few weeks.

Glasgow will probably pick up five points away to Zebre this weekend but have to face Ulster (H), Leinster (A) and Edinburgh (H) in their last three games. Ulster and Edinburgh will be clawing for points at that stage given how Conference B is shaping up, and going to play Leinster in the RDS is a tough prospect for any side. Meanwhile, Munster take on Zebre in Thomond Park after the Scarlets, then they face Cardiff in Cork, then Treviso in Italy and then finally Connacht on the last day of the regular season. Whatever about Glasgow, Munster will be looking to take 18 points from that last sequence of games regardless of what happens this weekend. If Munster manage to win in Llanelli this Saturday, it’ll make finishing top of the conference that much easier, even if they find themselves behind Glasgow by the end of this round.

It’s the winning the Llanelli that’s the thing.

The Scarlets haven’t been close to their best this season – if we define their “best” as being the way they won the PRO12 in 2017 and how they went to the semi-final of the Heineken Cup and final of the PRO14 last season – but they haven’t been all that bad, either. They currently find themselves 5th in Conference B and three points off the playoff spots as they currently stand, but that’s a product of their away form (9th in the combined conferences) rather than how they perform in Parc Y Scarlets. Their home form is joint third in the combined conferences, level on points earned with Glasgow and the Ospreys.

This will not be a walk in the park, not that anyone thought it was going to be. 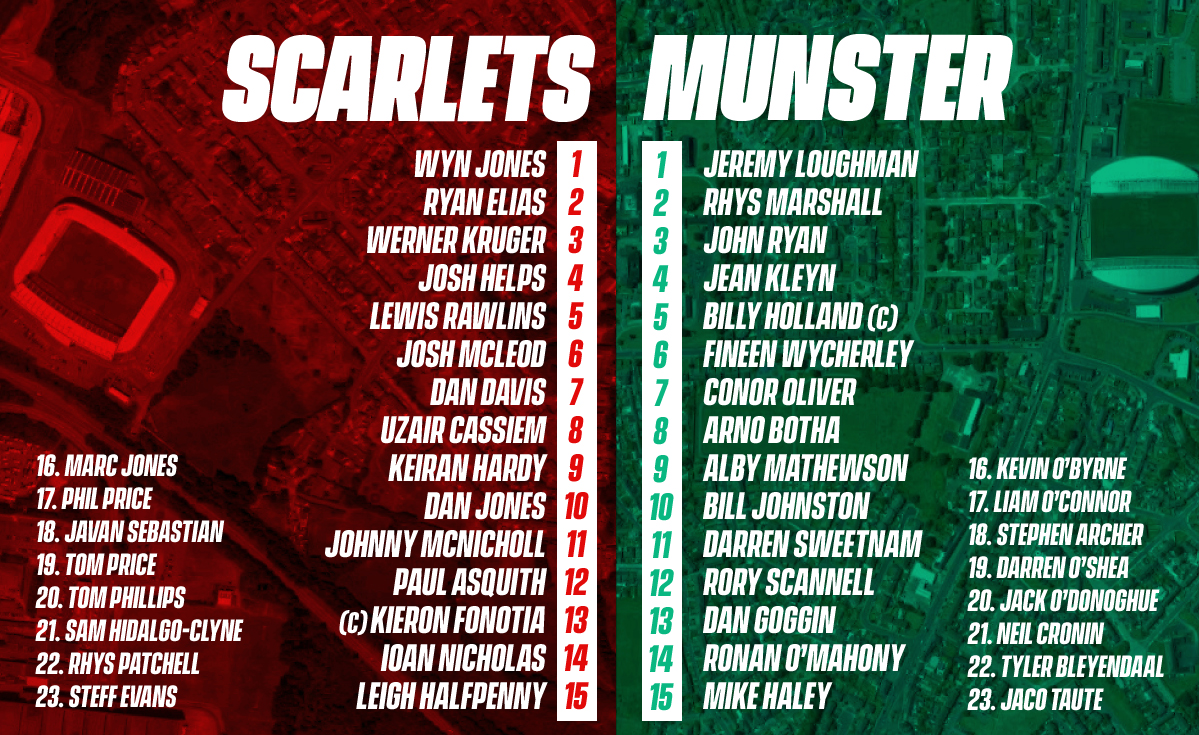 I’ve decided to change this up slightly. I’ll be assessing specific facets of the opposition’s set piece, defensive structure and other stuff in the Blood & Thunder Podcast – and here – so here I thought it would be cool to show where I rate the opposition (and Munster) as a whole in a European context as first choice units and then, depending on the how far away both Munster and the opposition are from what I would consider “full strength”, how the teams actually taking the field rate against each other.

Guinness PRO14 Round 16: Scarlets vs Munster

Blitzing All The Way

If there’s one thing that stands out to this new, Beirne and Barclay-less Scarlets, it’s how different their defence has been. You just don’t lose the number of turnovers that Tadhg Beirne won for the Scarlets last year (37 from both from the lineout, clean ruck turnovers and turnover penalties won) without suffering somewhere, and that seems to be in defence and in their ability to structure where their attacks take place.

The defensive dip in performance is notable though when we look at the raw statistics. The Scarlets conceded 43 tries and 365 points during the regular season in 2017/2018. This season, they’ve conceded 43 tries and 369 points with five games still to play. That’s not all down to Beirne and Barclay, of course, but it’s illustrative that the Scarlets aren’t winning as many of the turnovers that made them so tough to play against for the last two seasons.

I’ll talk about that in the Blood & Thunder Podcast.

Offensively, the Scarlets are still a fantastic side to watch and a dangerous side to defend against.

The Scarlets, as ever, want width and tempo in their attacking schemes. Wayne Pivac’s side are perfectly attuned to playing the game he wants all through the depth chart (something you’d expect after five years in charge) and they’re really good at maintaining that playing style through test windows. When they lose their test quality guys, they don’t really lose fluency with it, such is the quality and longevity of Pivac’s style.

Ultimately, the Scarlets want to pressure your defensive awareness and decision making in the #13 channel on openside and centre-field plays. They do this by generating width and passing points in multi-layered attacks.

Have a look at this attack against the Cheetahs last week;

Nicholas (playing in #14 today but #11 last week) drifted infield to the second layer to act as a second receiver off Jones. He was then able to bring McNicholls into the line with the Cheetahs edge-defence creating jagged lines for McNicholls to attack.

This is a variant of the Scarlets “Superload” that we’ve spoken about before. Look at Davis (red #7) and Elias (red #2) on the wing here.

Their presence in the wider channel means that the opposition’s edge defence has to make a lot of decisions as the ball hits the second layer. The Cheetahs didn’t know if they were blitzing or drifting in this instance, but Munster will have to mix it between the two – blitz and then drift. The Scarlets quite like playing against a team that will blitz hard into their attacking lines because it gives them corners to play around and they’re excellent at doing this. You might scrag them as they hit the break in the aftermath (and McNicholl has the most amount of clean breaks in the PRO14 this season so far) but at that stage, you’re already under their thumb.

Munster will have to take the space between the Scarlets’ attacking layers and our gain line and then drift with their carriers. 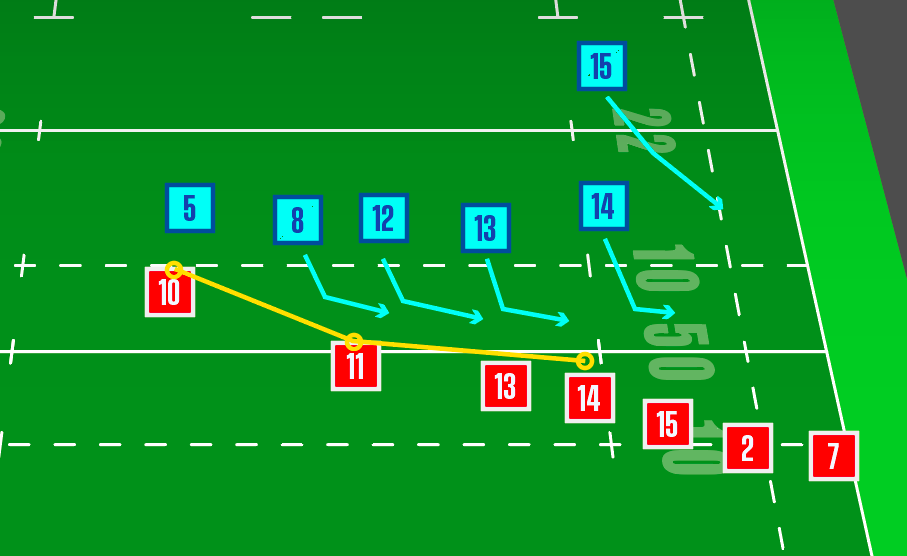 If we can protect against getting stepped on our inside shoulders and against the grain offloads, the touchline will be our friend and we can crowd them out. The Scarlets aren’t really built for going hard to through the phases with their forwards. They can do it, sure, but it’s not their preferred game. They want to create width and separation to make it easier for their carriers to find isolations and their runners to find space and angles.

Look at how they play after the break above;

They are winding up on those passes to get the ball to the opposite edge where the space is. They know that trucking the ball up through the forwards leads to slow ball, the opposition resetting and the chance evaporating, so they don’t hang around. The Scarlets want passes to create space, and space to create decisions for the opposition.

Even the way they attack off scrum follows these principles.

Four passes from base of the scrum to McNicholls, with the quality of the passing used to go around the Cheetahs’ blitz. Orange #11 shot onto Halfpenny’s line and that created the opportunity for McNicholls to isolate the fullback. The Cheetahs winger is always fighting a bad angle as he looks to recover, but the Scarlets have won a key battle here in that they have wide ruck position while losing only three attackers. The Cheetahs have to cluster on that wide ruck and immediately give up space and angles to the Scarlets attack on the openside play.

Look at the potential carrying and passing options on this; 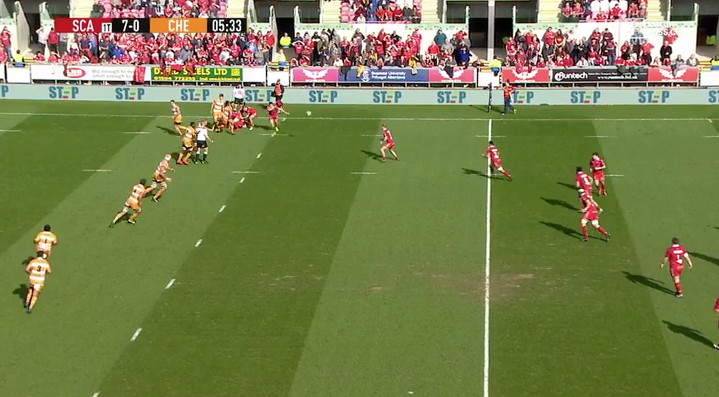 The Scarlets aren’t lining up flat to the gain line because they don’t need that – they have two distinct layers and are standing way back from the gain line. They want the Cheetahs to shoot out and create space.

Nicholas steps in as second receiver again, which means that two forwards are in the wide channel on the opposite side of the pitch where he would traditionally be. The Scarlets hit it up the middle and create another superload, by using the tight ruck to trap the bulk of the Cheetahs defence on the blindside.

It doesn’t quite work here, but you can see how it would work. If Kruger hangs onto the ball here, he has Elias and McLeod hitting outside him. This is the Scarlets other main philosophy in attack – our backs onto your forwards in space and our forwards into your backs in tight. They just switch around where that happens. Their backs attack your forwards up the middle when they’ve hit you on a wide ruck and they look to get their forwards one on one with your backs once they have you running.

The Scarlets also like to attack the space adjacent to the scrum because they know that forwards will cluster around that point and create isolations elsewhere.

Look at this scrum position; 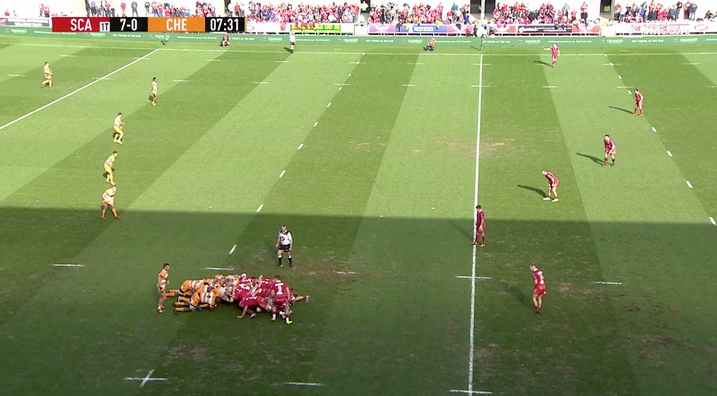 The Scarlets attack the space alongside this scrum to create a distinct space between forwards and backs.

All but one of the Cheetahs’ forwards – their openside – has been trapped on the blindside of the ruck. 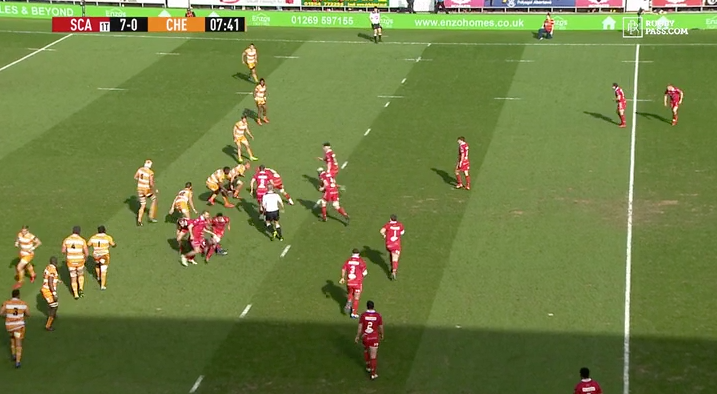 When the next carry comes in – targetted at the openside – the Cheetahs’ only have their giant lock Du Preez on the ball side of the ruck.

Now, when the Scarlets hit the space off this centre-field ruck, they can be confident that there’s going to be a lane to pass back too off their inside shoulder. Let’s see how it plays out.

McNicholl floats off his wing as a passing option at second receiver behind a screen before hitting the inside shoulder for an offload from the wide pod. This makes him hard to track for the inside defence, as he disappears once he passes but then runs into a traditional winger position after the ball moves on.

Try for the Scarlets.

They might not be the force they were last year and be missing a fair few players here but they are still incredibly dangerous. Munster will have to defend with real structure and intelligence to stop these guys stealing a one or two try lead before we’ve even hit our straps.

The Scarlets were very good against the Cheetahs last week but Munster will have to impose the heavy game plan that saw the Southern Province beat up the Scarlets in Thomond Park last Spring if they’ll want to succeed. That is a game that Munster will need to repeat the template for this week. Do that, and a home semi is theirs for the taking, whatever the table says this evening.