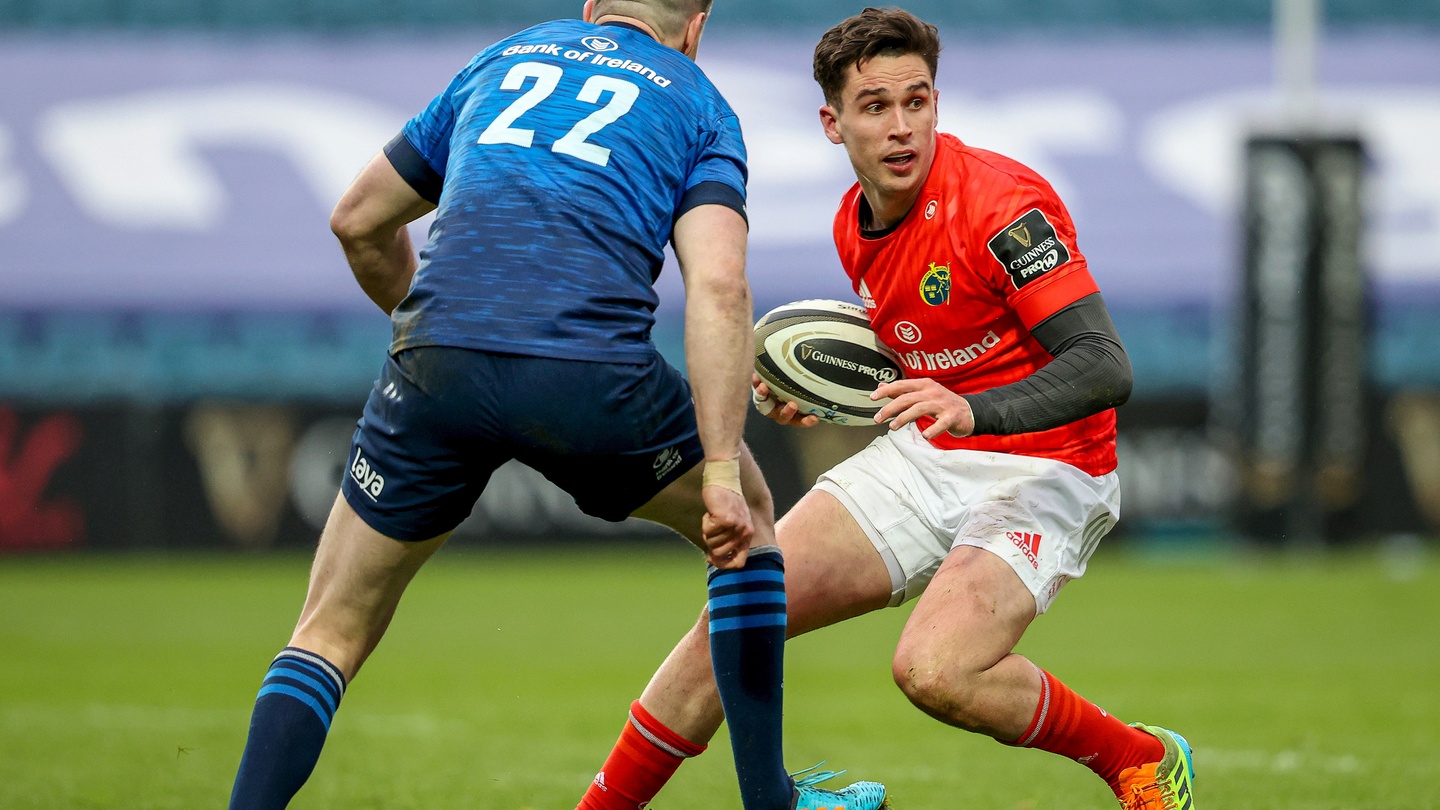 By Tom Savage5 min read
SponsoredNTES
Leinster are pretty confident that they have Munster’s number at this stage. Why wouldn’t they? Munster have only managed to beat Leinster twice in the twelve meetings between the clubs since 2016/17 and the games over the last year have taken on a very familiar pattern.

If Munster kick well, we lose by 3 points or less because, traditionally at this stage, we can’t impact Leinster physically in the third quarter and beyond. If Munster kick poorly, we lose by 10 points plus because we can’t impact Leinster physically at any point and so end up defending for long stretches in areas of the field where Leinster are comfortable. The key part of all these defeats has been Leinster’s power differential in the front five.

Leinster’s team selection for this game is, I believe, an expression of the most rotated team they believe they can go with while still applying the principles that have consistently won games for them in this fixture. The selection of Andrew Porter to start alone is a sign that Leinster are taking this game seriously. Leinster, more than anyone, understand the value of momentum so while it would be tempting to keep key players like Porter on ice with Furlong, Kelleher and Healy, they know that denying Munster an away win in the RDS is valuable enough to risk Porter for 60+ minutes.

I think Leinster will also be quite interested to see how Dan Sheehan plays in the Heavy Power Hooker role usually occupied by Ronan Kelleher – if it takes even partially, Leinster will have a lot of the advantages they have relied on to win over the last few fixtures.

Munster’s selection brings a tonne of pressure with it.

Every single senior player has been backed to start, bar Conway who finds himself out of the squad after a few average performances relative to what we know he’s capable of. Without forecasting a defeat before a ball is kicked, if this starting selection eats another loss on Saturday, where to from there? You could be forgiven for thinking this game is a bit of a nothing burger but, for me, it’s of huge significance because of the ramifications of a win or a loss for Munster’s senior players and the coaches who backed them with selection.

Sure, there could well be IRFU instructions at play (never mind potential Lions auditions for guys like Murray, Earls, Beirne, maybe even O’Mahony and Stander) but when you select Archer, Scannell, Beirne, O’Mahony, Stander, Murray, Carbery and Earls to start and set the table for the younger talent selected on the bench en-masse to finish, you invite pressure on the result. If the senior players cannot set the table or, worse still, they play the guts of 70 minutes and still lose, there will be an unpleasant, bloody mouth feeling post-game that will take some time to shift. For some, it might never shift.

Leinster have bigger and better things to plan for so they can afford to go with a new halfback pairing and rotate out some (but far from all) of their key players. They are where everyone wants to be – winning and building. We are in a spot where we need a win from somewhere, anywhere, against Leinster to show that we still can. 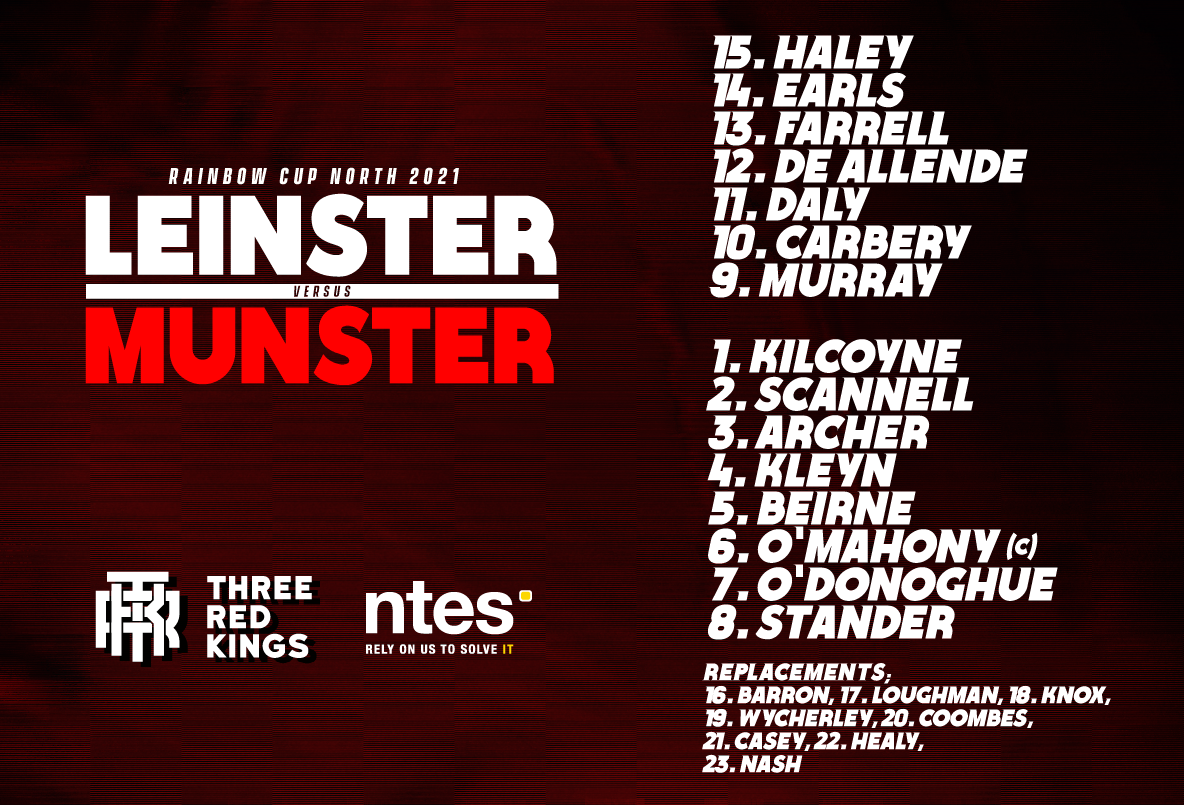 The key for Munster will be how we manage our bench transition.

I had a number of raised eyebrows in my mentions about Gavin Coombes being “on the bench” for this one but he, along with Wycherley and Knox should give us something close to the power off the bench that we’ve been looking for against Leinster over the last few games.

That transition to the bench after 50/60 minutes is a key component to managing this game, presuming we’re still in with a chance of winning at that stage. As recently as a month ago, Munster brought Stephen Archer, Kevin O’Byrne, Billy Holland and Jack O’Donoghue off the bench to impact the game in the second half and while they are all good players in their specific roles, they are not guys with the physical profile to impact Leinster where and how Leinster worry about being impacted.

I’ve covered Leinster a lot over the last year. I’ve done three Red Eyes over the last year. So believe me when I tell you that they are not an unbeatable juggernaut. They could well win another star this season but it won’t be because they are impossible to beat. If you pressure them on the gainline consistently they are as vulnerable as any other team.

Just have a look at Exeter’s second try from the recent Quarter-Final in Sandy Park. It starts off as a retained Exeter box kick (remember those?) and, right off that retained kick, Exeter generated a big gain line win off #9, which opened up space for a wider attack. Right after that soft edge was retained, another collision win off #9 sets up a wider foray off a screen – 00:29 seconds – because Leinster have compressed around the lost collision.

The eventual try-scoring opportunity came when Exeter went back to the same wide position, forced a compression with an effective pick and go, doubled down on that compression with another carry off #9 and then found an isolated tight five forward on the edge of the line when they returned to the screen structure. Try.

All you need to do is threaten Leinster off #9 in their half, and you’ll get chances like this. It’s easy writing it out than it is to do it, I’ll tell you that. Munster have consistently struggled to impact Leinster in this way over an entire 80 minutes.

You can even see the opportunities it presented for Exeter when they got moderately extended possession off this full lineout.

Can you force Leinster in conceding a compression by winning the gainline or committing defenders to a position or getting the ball outside their forward line and winning that particular collision to open up the backline? Can you then extend the ball accurately to your wider structure to pick out your isolations?

The lineout will be a key part of creating these scenarios. Without Henshaw – the best defensive midfielder in Europe, for my money – Leinster will naturally be concerned about the impact that De Allende and Farrell could potentially have on the covering line of Penny, Byrne and O’Loughlin. I’d imagine that Leinster will want to keep Doris in that outside line to protect against the possible compression/gainline win that De Allende, in particular, can create. That extension between Penny and Doris at the edge of the forward line with Byrne and O’Loughlin at 10/12 could be something Munster can work with, both as a direct ball-carrying threat and as a chokepoint for the Leinster defence for wider attacks or split attacks back against the grain.

If you can do all of these things, you will score tries if you are accurate.

Whether Munster can do this, well, we’ll just have to wait and see.