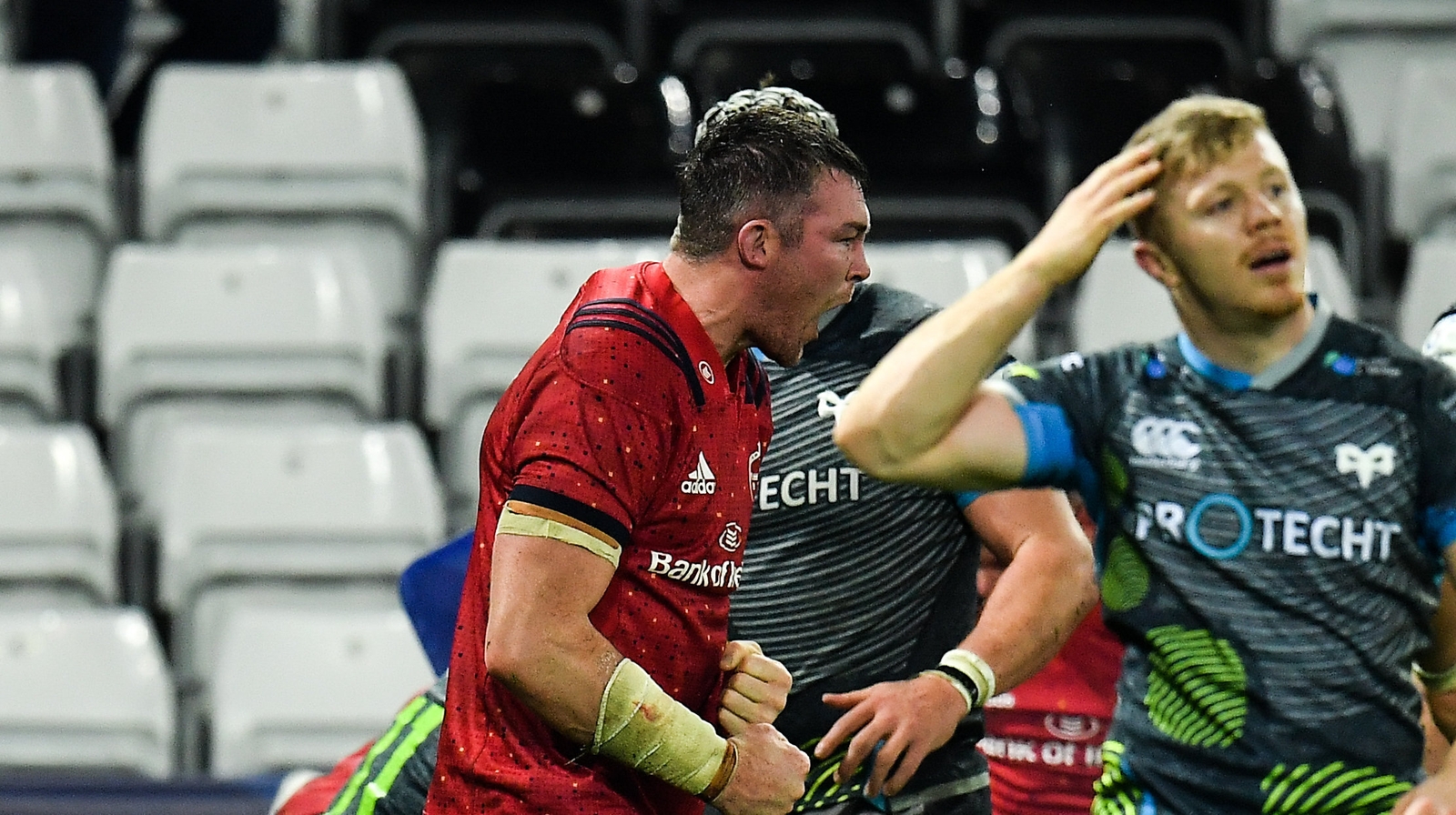 There’s a strong hint of Narrative Voodoo around this one.

Simon Zebo and Donnacha Ryan both starting on their return to Thomond Park? I’ve seen this story so often I can almost recite the lines off by heart.  When Ronan O’Gara was involved with Racing on the coaching side it was almost inevitable that Munster would be drawn against them in the pool stages and beyond. Donnacha Ryan signing for them only added to the Narrative Voodoo and, when Simon Zebo decided to head to Paris before last season it was really only a matter of time before we’d be drawn together again. It was inevitable.

The laws of Narrative Voodoo tells us that headlines like “Zebo Breaks Munster Hearts” and “Ryan Leads Racing Raid of Thomond Park” are not only annoying to read, but also highly likely. I’m only mentioning these cursed headlines now to try to counter Narrative Voodoo with the infinitely more powerful TRK Jinx.

Let’s hold the less memorable but infinitely preferable “Miserable Return To Thomond Park for Zebo & Ryan” close to our chests like a totem to ward against the dark magick of Narrative Voodoo.

And then let’s get to the teamsheets.

If I was to break down Racing into two key areas, it would be their offensive and defensive lineout and the attacking work of Finn Russell.

I’ll start with Russell because he’s a simpler thing to describe in writing and finish with the lineout on the Blood & Thunder Podcast. Finn Russell, quite simply, is an incredibly gifted, deeply skilled attacking halfback with an all-encompassing skillset. He can pass off both sides with great range and accuracy. He’s got an excellent break, with top-end pace and evasive agility in the tackle. He can offload. He can kick pass, he can grubber, he can chip. The only thing that I think he can’t do with consistency is tactically control games from 0 to 80 and what I mean by that is that he’s an excellent reactive player but can struggle to move his pieces around the board when faced with an unreliable source of possession.

The old idiom of “forwards win games, backs by how much” could have been written exclusively about Finn Russell. Racing dominated possession and territory against Saracens so Finn Russell ended up with a lot of possessions – 50 in total, which is massive. He had 11 kicks, 26 passes and 13 carries and did a great job of involving Racing’s danger outside backs like Vakatawa and Dulin.

Russell is at his most dangerous when he’s coming onto third or fourth phase possession on a flat approach angle.

Here’s a good example of what that looks like;

He takes a long pass from Machenaud right at the edge of the play and unlocks space for Dulin to attack the edge of Sarries defensive press. He’s super comfortable operating in those close quarters spaces

Here are a few more looks at Russell’s breaks against Saracens and have a look for a common theme.

Did you see it? All the breaks involved him attacking tight five forwards in space on a shallow angle off the breakdown. He’s not really taking any of these breaks from the pocket behind a pod of forwards so he’s always attacking the line as soon as he takes possession. From there, he can break with his deceptive carry of the ball, footwork and acceleration or find guys like Vakatawa in the wide spaces.

If you can’t properly squeeze Russell’s possession on these narrow phases he’s got the range as a linkman to bring in their real dangermen, Virimi Vakatawa and Simon Zebo.

Vakatawa’s presence on the edge here is so dangerous. He’s a power runner and, as you can see above, an able offloader of the ball. He’s most dangerous in that 15m space running hard and straight at edge defenders. If you can prevent Russell disrupting the space inside, you can go some way to stopping Vakatawa and thus Racing.

The remedy? A very mobile pack – back row in particular – that balances the need to stop Racing in the tight exchanges off Machenaud with the ability to slide out onto Russell’s preferred space. We can’t give Russell the kinds of looks that Sarries gave him; we’ll need O’Donoghue, Beirne, O’Mahony and Stander filling the wider spaces off the ruck to pressurise Russell’s possession. 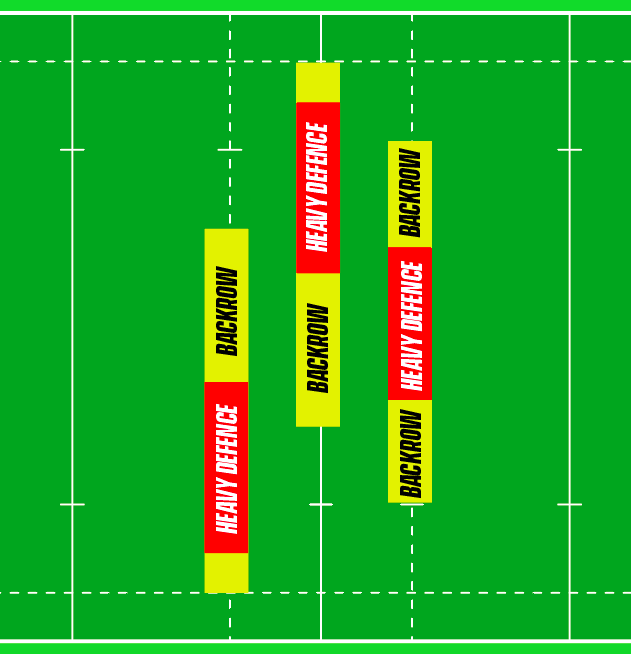 This will put a lot of pressure on our heavier defenders but I think we match up well with Racing in this department, on paper at least. Racing’s primary carrying outlets are Chat, Claassen and then they vary it quite a bit but when they get a fair bit of possession they are very good – Russell again – at spreading the ball wide to the wings.

The key will be to managing Russell’s “out” options on those big openside plays. 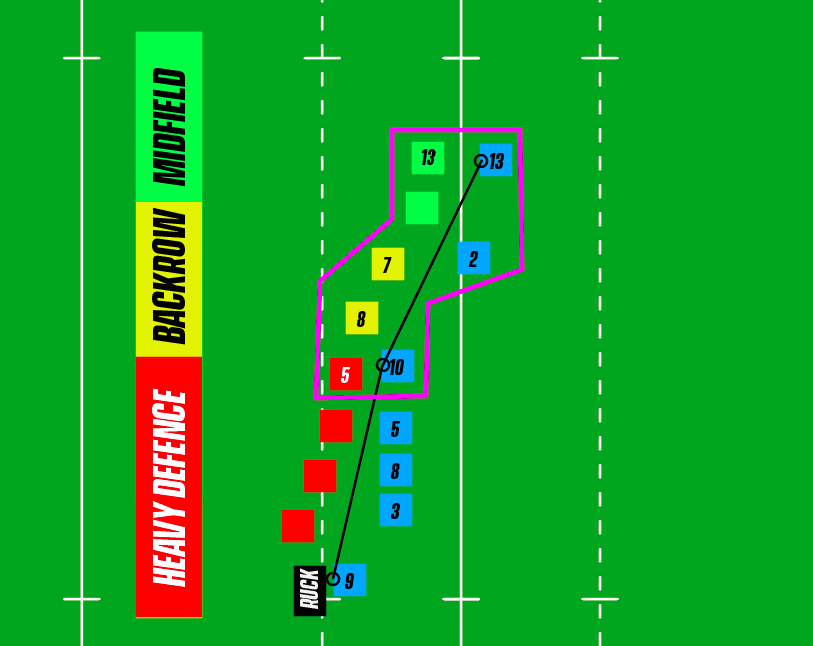 We want Beirne to be the link man in defence between our heavy defence (Loughman, Scannell, Ryan, Kleyn) and our back row/midfield press. The key will be to prevent Russell from breaking by making a solid “hinge” between the players covering him and his release options outside. We want to make Racing fear the turnover and too much contact on Russell at that hinge while pressurising the outside pass to Vakitawa or Chat. Haley, Earls and Conway will be vital in covering Russell’s chip kicks and grubbers from his classic wide, flat position directly off Machenaud.

If we can pressurise Russell and his pass options, we’ll go a long way to getting the win here.