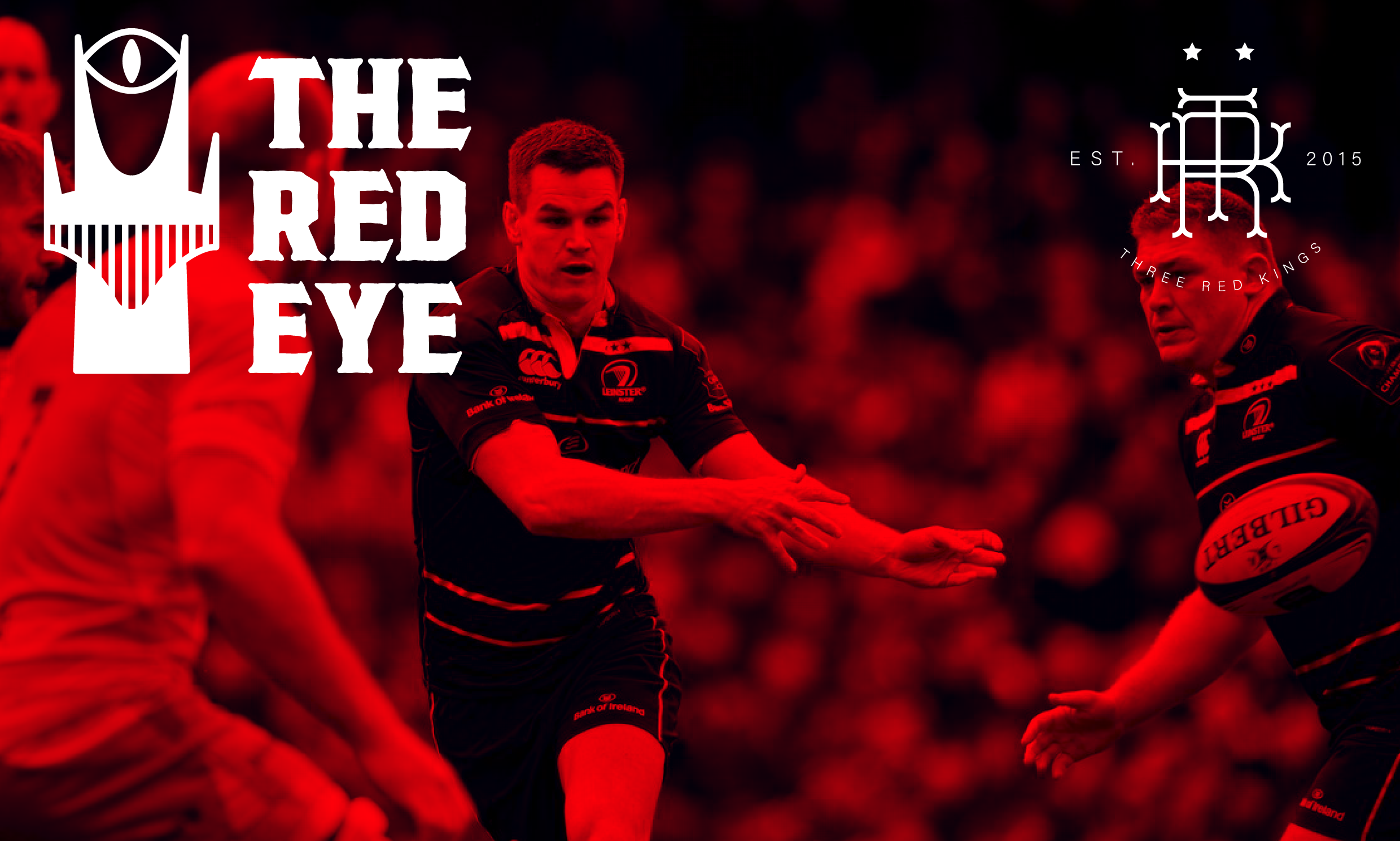 Scarlets lost their semi-final game to Leinster three times – in the 37th minute, the 50th minute and, finally, when Romain Poite blew the final whistle.

This PRO14 final is one that can’t help but be defined by these two sides previous A1 meeting in the Champions Cup final of just over a month ago. That 38-16 defeat was as comprehensive a loss as the Scarlets have shipped in quite some time and can’t help but be a dominant factor in assessing this game both externally and internally for both sides.

This essentially acts as a back-to-back style game for the analysts of both sides, in that it gives you a recent, full strength, A1 game between the sides to assess when and where it all went wrong – or right, in Leinster’s case.

One narrative that has come to prominence in the last few weeks is “freshness” but, looking at the 23s, Leinster are able to bring in quite a bit more heavy machinery for this game than Scarlets have managed. Leinster have brought back Leavy, Kearney and Sexton for this game after skipping the semi-final while Scarlets have been forced into a back five reshuffle in the pack with Beirne dropping back to #8 with Lewis Rawlins coming into the second row. They can, however, bring back Leigh Halfpenny who will be a key component in managing Leinster’s breakdown approach in the middle of the field.

The report here is on these particular Leinster/Scarlets selections as it pertains to selection in specific positions.

Based on the result of the last game between these two selections, and the relative strength and freshness of Sexton, Kearney and Leavy, I can only lean towards a Leinster win.

From a blue POV, the recipe is simple – do what you did last time and bridge over the Scarlets expected adjustments. As for the Scarlets? They need a big turnaround to bridge the gap from a month ago.

Here are some of the areas I think they can come close to narrowing the gap.

If there’s one area of the game that Scarlets can look to against the very best sides in Europe, it’s their ability to win turnover ball at the breakdown. Will Boyde, James Davies, Aaron Shingler and, of course, Tadhg Beirne have 71 breakdown turnovers between them in the regular PRO14 season and, when they’re on form over the ball, they are a key component of the Scarlets ability to slice team to pieces in transition.

The problem against Leinster was that Scarlets weren’t able to get the reward over the ball that they traditionally get. Beirne, in particular, was very well targetted by Leinster at the breakdown, even if the time margins between a successful clean out and a turnover penalty were very slim on occasion.

Stuart Berry, as we saw last weekend, is not afraid to reward jackaling players on the ground so the Scarlets will be looking to take advantage where possible. The sheer physicality of Leinster’s rucking at the breakdown was enough to not only prevent Scarlets from winning clean turnovers but also maintain multiple phases of possession in dangerous areas of the pitch.

In the interim, the Scarlets will have seen the relative success attained by Racing 92 and Munster in the breakdown collisions but, to duplicate that tactic, Scarlets will need to change their system slightly.

When the Scarlets defend big openside phases, they use a compact blitz to meet the line of the ball carrier and create scenarios that play into their main defensive strength – their ability to turn over the ball at the breakdown.

This system is good for creating “pockets of disruption” around the front of rucks that stall the attacking cleanout and give the likes of Beirne, Shingler and Davies time and space to get over the ball and win a turnover. This is a tactic to get around the relative “lightness” of their pack when it contains, essentially, two opensides in the back row when Barclay is playing and it’s quite effective for playing to their strengths.

When it works well, the opposition make ground in contact but find that the Scarlets have clamped over the ball and stolen possession in the space between tackle and cleanout.

Here’s a brief example of the concept;

The defending player tackles his man and then looks to swing around the opposition side of the ruck to disrupt the cleanout and give the jackal time and space to work.

Too often against Leinster, they didn’t get that space and ended up ceding ground and quick ball, which is a killer against this Leinster side.

That’s why it’s not a surprise to see Pivac opt for a slightly heavier alignment in his pack for this in the absence of the influential Barclay. Having Beirne at 8 doesn’t take anything away from Scarlets with the ball in hand and adding two big physical second rows will up their ability to get a better stop on Leinster’s phase play up the middle of the pitch.

Working Off The Maul

Another massive factor in the previous game in the Aviva was Leinster’s ability to punish the Scarlets within a few phases of the lineout.

Initially, I thought that the Scarlets had set a good tone for their work in maul d with Beirne – as you’d expect – to the fore.

That looked like good video work to me. I’ve thought that some of Leinster’s maul constructions with Leave as a lifter around the middle of the pitch have been a little vulnerable and Beirne certainly took advantage of that with a strong sack.

Leinster adapted well to this initial set back though and used the maul as a platform to get their elite setpiece phase play into the game regularly.

Leinster are supremely dangerous when they’re coming around the corner like this because they’ve got so many options to run off what, essentially, is two or three setups. This kind of expandable simplicity is a key part of the way Graham Henry coaches strike moves off the lineout so it’s no surprise to Leinster’s work go through the roof in this area of the game since “Ted” spent a few weeks there last season.

Leinster were able to manipulate the Scarlets repeatedly and they’ll look to do the same in this final. Will Scarlets go after Leinster in the air? I think they have to and risk a suboptimal maul position because if Leinster can compress and then stretch them like this, they’ll make ground again and again. Losing Henshaw will be a blow to Leinster as he’s a vital part of their deceptions off the lineout and this could be an area that bails Scarlets out a little.

Without Henshaw, Leinster tend to spread their strike plays a little wider to make up for the internal calculations that defences make in his absence. In practice, Hadleigh Parkes and Rhys Patchell will feel a little more comfortable lining up across from Nacewa and Sexton than they would Henshaw and Sexton, so that might require them using shorter lineout constructions to get Leavy and/or Conan into the game but that creates the kind of clustered midfield that isn’t ideal. Look for Leinster to stretch Ringrose and Larmour out for a few long-range passes off the top of the lineout to get them running one on one with Williams/McNicholl/Halfpenny.

From a Leinster perspective, they need to be careful how they turn the ball over to Scarlets. It’s a well worked cliche at this point, but the Scarlets are set up to play off the possession they take from you and that you give them.

Kearney and Sexton will have a lot of responsibility on their exits but who else would you want in that scenario? The key part will be McGrath’s box kicking. If Scarlets can get close to parity when Leinster attack through the middle of the pitch, Leinster will kick after three or four phases of neutral movement. If McGrath kicks well, then Leinster can manage the Scarlets transition but if they can’t, then the Scarlets are designed to attack that disrupted space.

Normally, teams look to box kick to the wings to ensure they have a big blitz to work with if they don’t retain possession but Scarlets are really, really good at getting at the edge from that possession.

They use their forwards handling to “shift” numbers beyond the edge and generate excellent attacking angles for their back three and midfield. The heavy screen in the middle of the pitch holds the Leinster blitz and Beirne’s pass out the back for Patchell gives Scarlets the “step out” they need to attack the edge with good numbers. 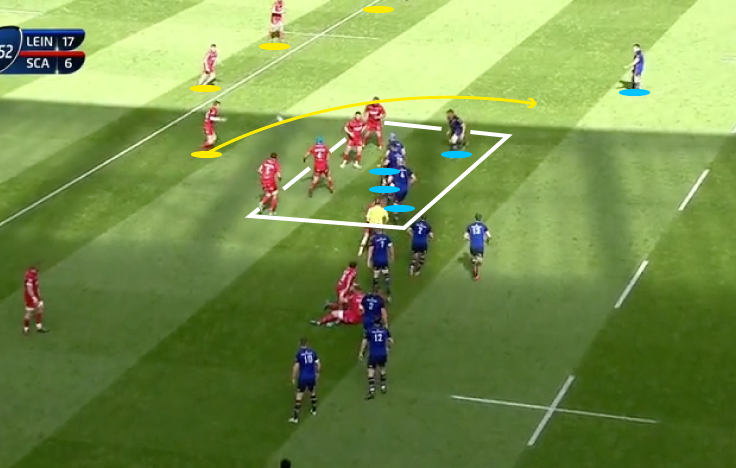 If they don’t breach the 22 with that kind of movement, they’ll look to work the ball back into the middle of the pitch in a zig-zag pattern to force the opposition to constantly reload and realign along centre-field rucks. Once the Scarlets sneak numbers onto a tram, they strike with overlaps and tight handling.

They couldn’t do this with regularity against Leinster, such was the physical pressure they endured in contact. When they move the ball on phase play, you’ll constantly see that heavy screen – look at here off a Hadleigh Parkes carry;

The heavy screen narrows Leinster after the carry and gives Evans space to attack the edge on the next phase. 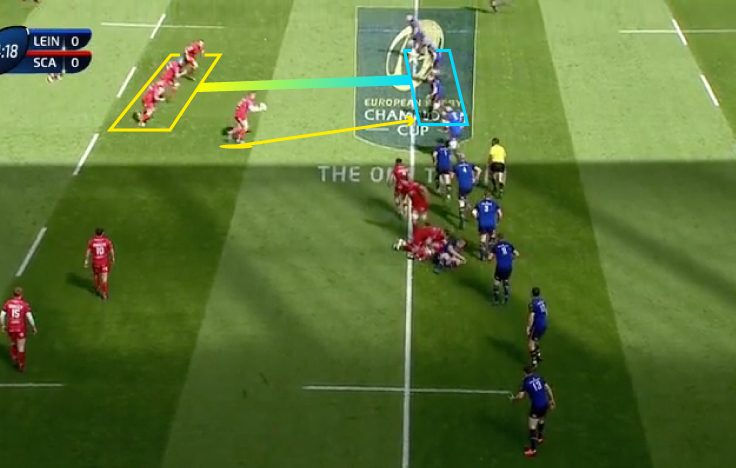 It buys a penalty from a forward scrambling to get across to the space but the Scarlets will be looking to take greater advantage of these kinds of scenarios than they did.

This will be a key area of responsibility for Larmour/Lowe to step up and make good decisions on. I think the Scarlets will look to test the decision making of those two players in the trams, just as they did to Adam Byrne in the RDS 12 months ago. In the semi-final, Leinster had a super experienced back three making elite decisions on where and when to “shut the door” on the wing. They have Kearney watching the back but the decision making of Larmour and Lowe will be the key to shepherding the Scarlets as they probe Leinster’s decision making across the pitch.

If Leinster can suffocate the Scarlets attempts to go wide, read their screens and force them into narrow carrying patterns, they can force the Scarlets into hasty, high risk plays like this;

They’ll always be a threat but, once you see stuff like this, you know you’ve got the Scarlets under pressure.

I can’t really see beyond a Leinster win but if the Scarlets can improve their defensive power, get an extra half a second at the breakdown and test the IQ of Larmour and Lowe, they can score tries against this Leinster side.

With Halfpenny in the side, any breakdown indiscretion from Leinster on either side of the ball becomes dangerous and that is where Stuart Berry’s week of review after the semi-final could prove to be sticky for the European champions.

Regardless, I expect them to come through in a similar fashion as last month, albeit a little tighter on the scoreboard.