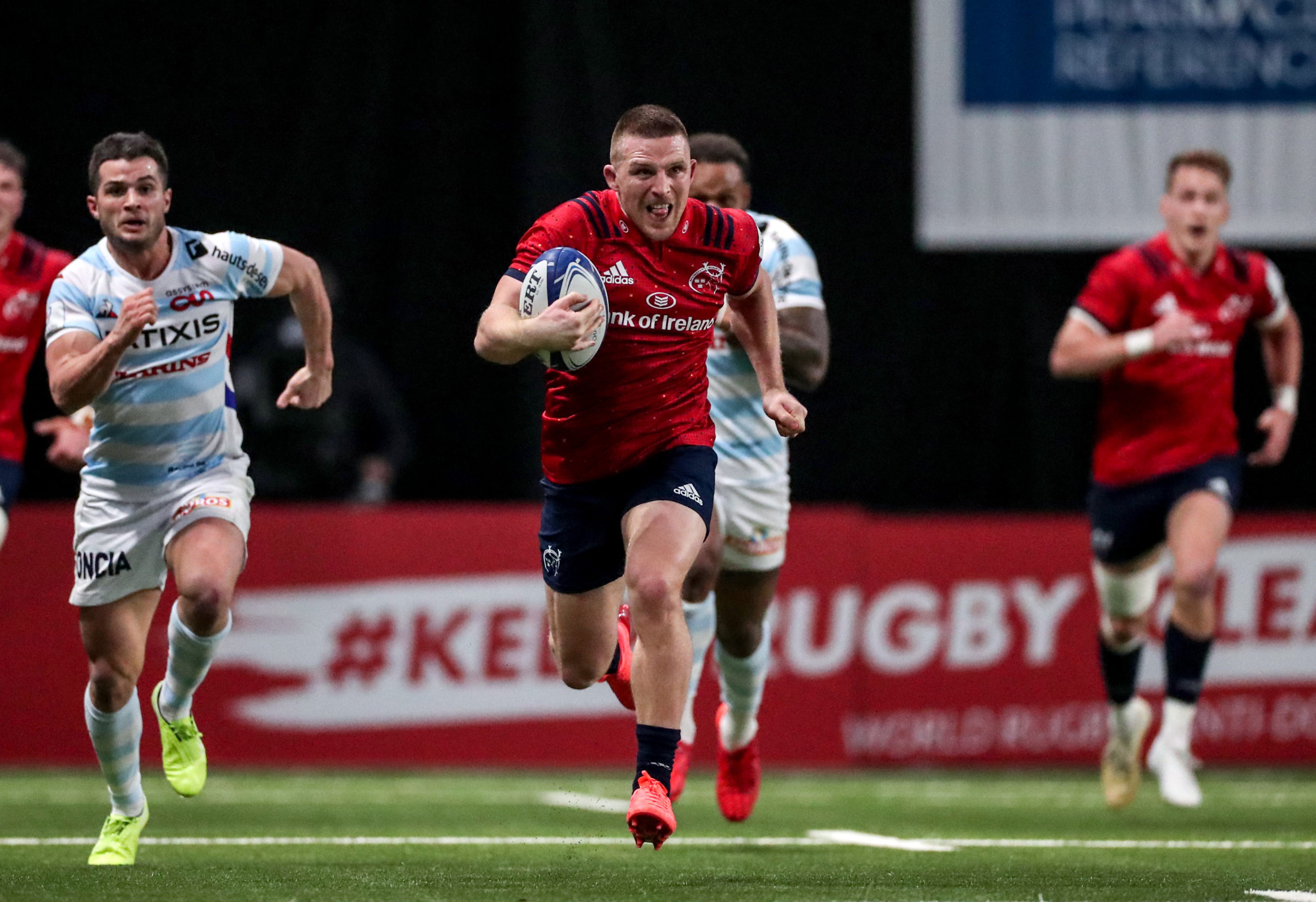 Munster’s future in this pool is firmly in the hands of others.

Our part of the job is relatively simple, at least when it comes to typing it out; we have to win and hope that we better Saracens result by three clear points to finish second.

If Saracens win, then nothing we do will be good enough to qualify for the knockouts. If Sarries lose, we’ll still need a bonus-point win and results to go our way elsewhere to sneak into the last eight.

But, ultimately, that’s not where we aspire to be. Munster, as a club, want to be shooting for the top seeding in Round Six but here we are, down the other end hoping for the best but facing a likely scenario of being effectively out of the Champions Cup before a ball has been funted in anger.

We’ll look back at frustrating moments against Racing and Saracens in Limerick and ponder on what might have been in Allianz Park with a mix of frustration and acceptance that we are where we are right now. This pool contained the two sides who’ve dumped us out of Europe at the semi-final stage over the past three seasons and if this season has shown us anything, it’s that the gap that was there on those three days is still there today, albeit reduced somewhat depending on the context.

We’re unlikely to get another chance to close the gap this season, but this last round of the Champions Cup provides an opportunity to illustrate our intent for the rest of the season. We’re on a poor enough run since December – two wins in six – so whatever happens later in the season, beating Ospreys this Sunday is a must.

On paper, you’d be forgiven for thinking that this was a no-brainer. Ospreys have lost every game in this pool and, in fact, have won one game all season; a 24-20 win over Benetton in Round 2 of the PRO14. But Ospreys season has been distorted by a lack of access to their top internationals for much of their fifteen games so far this season.

Yes, they’ve been poor, but add the likes of Alun Wyn Jones, Justin Tipuric, Adam Beard, Owen Watkin and George North to any side and they’ll improve – Jones and Tipuric in particular. They come to Thomond Park with nothing to lose and armed with the knowledge that Munster are under pressure to produce something for the home crowd at the back end of some disappointing results. Can the Ospreys frustrate their way to a win? They have the quality for it onfield and, crucially, a pack that can cause us trouble physically.

This game will need caution if it’s to go the way we’re visualising.

The Ospreys are a familiar enough foe for us this season.

This will be our third game against them this season, but the first time that they will have big names like Alun Wyn Jones, Justin Tipuric and George North included in their starting XV. As a natural by-product of these two previous contests, I’ve ended up covering the Ospreys quite a bit this season already but I’ll have a look at how they went last week against Saracens and try to extrapolate a way for Munster to approach this game offensively.

Saracens might have rotated their selection for last week’s game at the Liberty Stadium but they kept their front five relatively strong – Carré, Kruis, Singleton, Lamositele and Skelton started with Koch and Kpoku coming off the bench. They had the set-piece in mind, yes, but Saracens knew how difficult it would be to gain traction against Ospreys key forward defenders – Lydiate, Jones and Beard – in settled phase play.

The same problem will be present this week for us as Ospreys have selected Tipuric, Lydiate, Jones, Davies and Baker in their starting pack. With this pack configuration, the Ospreys will be very strong in the middle of the field. Ospreys might have lost to a 14 man Saracens side last weekend but they played quite well and, in my opinion, were undone by the weather limiting their ability to play with the width that hurt Saracens at key points. The rain brought the game back to Ospreys’ close-in offensive phase play and played into Saracens’ hands. The Ospreys dominated possession in both halves but handling errors and lost offensive close-in collisions did them in, in my opinion. Essentially, the weather narrowed the scope of the contest in the second half – as it did in Limerick in Round 3 – and Saracens had the size and power to keep Ospreys out as the Swansea region tired, even with a man disadvantage.

So when you read “Ospreys couldn’t even beat a Saracens B-team with 14 men”, treat it with the scepticism it deserves. The weather and Ospreys inability to gain traction on the Saracens centre-field defence cost them more anything.

Munster will expect to dominate possession in this contest but, as we’ve seen in Musgrave Park and at times in the Liberty, the Ospreys are well capable of hanging onto the ball for multiple phases. If I’m whoever is coaching the Ospreys these days, I’m thinking that I try to make Munster’s phase possession as expensive as possible. If that means hanging onto the ball for long periods without going anywhere, so be it.

When I look at how we stack up with Ospreys from a ball-carrying perspective, I can see a lot of our set-up carries coming from Kilcoyne and Stander off #9 and, if quick-ball is generated, hitting Wycherley/Farrell or swivelling something off Holland to Hanrahan with wingers coming inside. 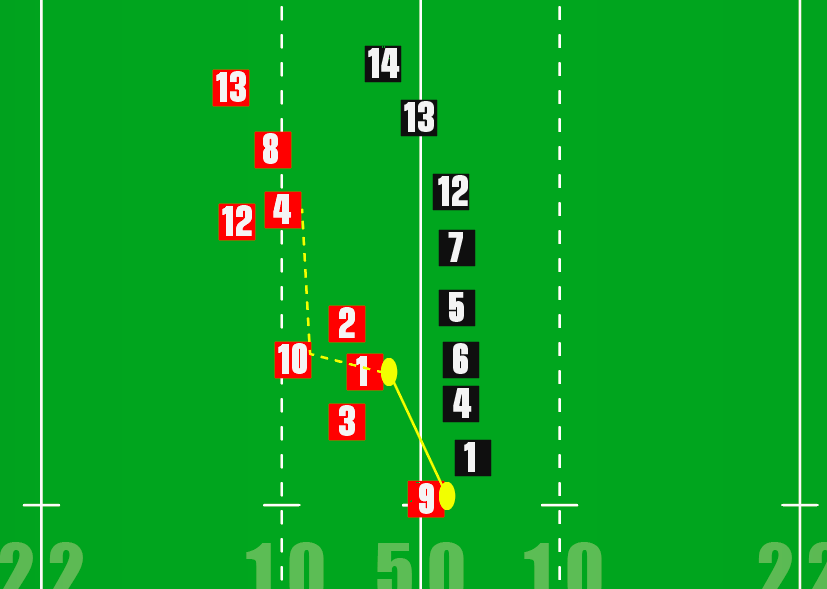 Last week, we alternated between 2-3-2-1 and 1-3-3-1 quite fluidly with Stander gradually taking a wider position as the game wore on. Too often I felt that Niall Scannell took an advanced position in the Midfield Two that meant he got multiple possessions of the ball but was unable to affect much in the way of gainline or effectively committing defenders. I’d expect to see him move closer to the ruck with Wycherley on the field. That Midfield Two position is vital to hurting Ospreys. 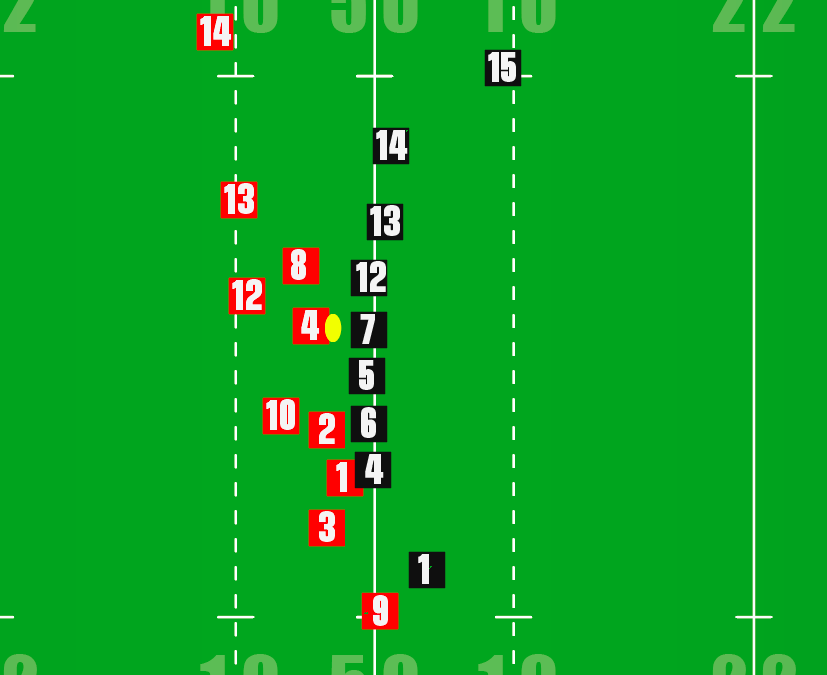 Our effectiveness in this position will be crucial to our success in this game. We’ll probably run into tough enough resistance off #9 but if we can move the ball towards the seam between Tipuric and Williams in midfield, we’ll be able to attack Ospreys tendency to over blitz on the edges of their defensive line, especially if North and Dirksen exhibit the same patterns as they did last weekend.

Also, the way that Ospreys rotate their backrow around is something that can provide opportunities, especially with Baker and Lydiate filling gaps in wider areas. Watch Lydiate here;

The same principle works off the side of mauls. Saracens got good value out of dragging Ospreys defensive maul deep infield – around the 15m line – to attack their cover defenders off the maul break.

Saracens attack Marfo and Otten on the extended blindside of this maul with a late switch by Manu Vunipola;

If Tipuric is covering the openside of these maul breaks – as you’d expect – then I think we can get at Smith/Otten/Baker/Lydiate on the break with the right use of Nash/Conway and Hanrahan off the break.

If Munster can avoid trouble at the scrum and effectively launch off both scrum and lineout at Price (and the compression around Price) in the #10 channel, we have a way to consistently hurt the Ospreys until they lose interest in the contest.