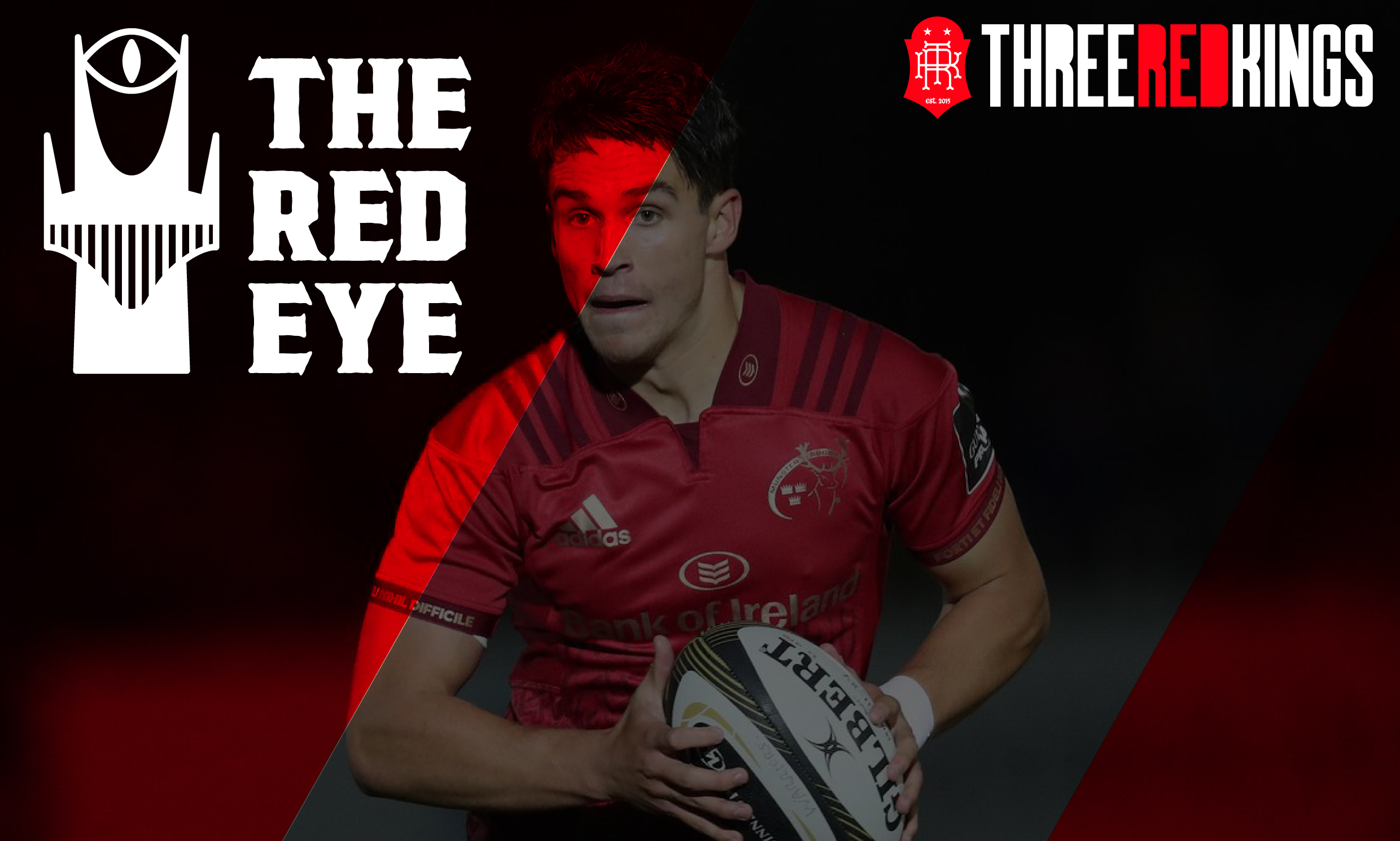 There were two Red Eyes prepared for this game.

The first one was based on an Ospreys side that the likes of Williams, Davies, Jones, Tipuric, Lydiate and North in it. The second was the reduced one you’ll see here, in case the Ospreys decided to ditch their internationals for Friday’s trip to Cork.

So – are the Ospreys “disrespecting the league”? That accusation has often been laid at the door of the Irish provinces but the Ospreys selection decision for this fixture, their first away game, makes a lot of sense when you look at this round in context.

The Ospreys gave their test stars an early run out in the first two rounds against Edinburgh and the Cheetahs – two winnable home games – and have rested their top guys from a potentially abrasive clash in Cork against a Munster side who traditionally bring more senior guys in their second home game of the PRO14. Allen Clarke will also know that away form in the Conference format isn’t the biggest indicator of playoff qualification – just look at Munster and the Cheetahs away record last season for an indicator of that – so at this point in the season with 9 points already in the bag, it makes sense for them to depower for this one.

We might not like that but it doesn’t mean that five points for Munster are a guarantee here – just highly likely. 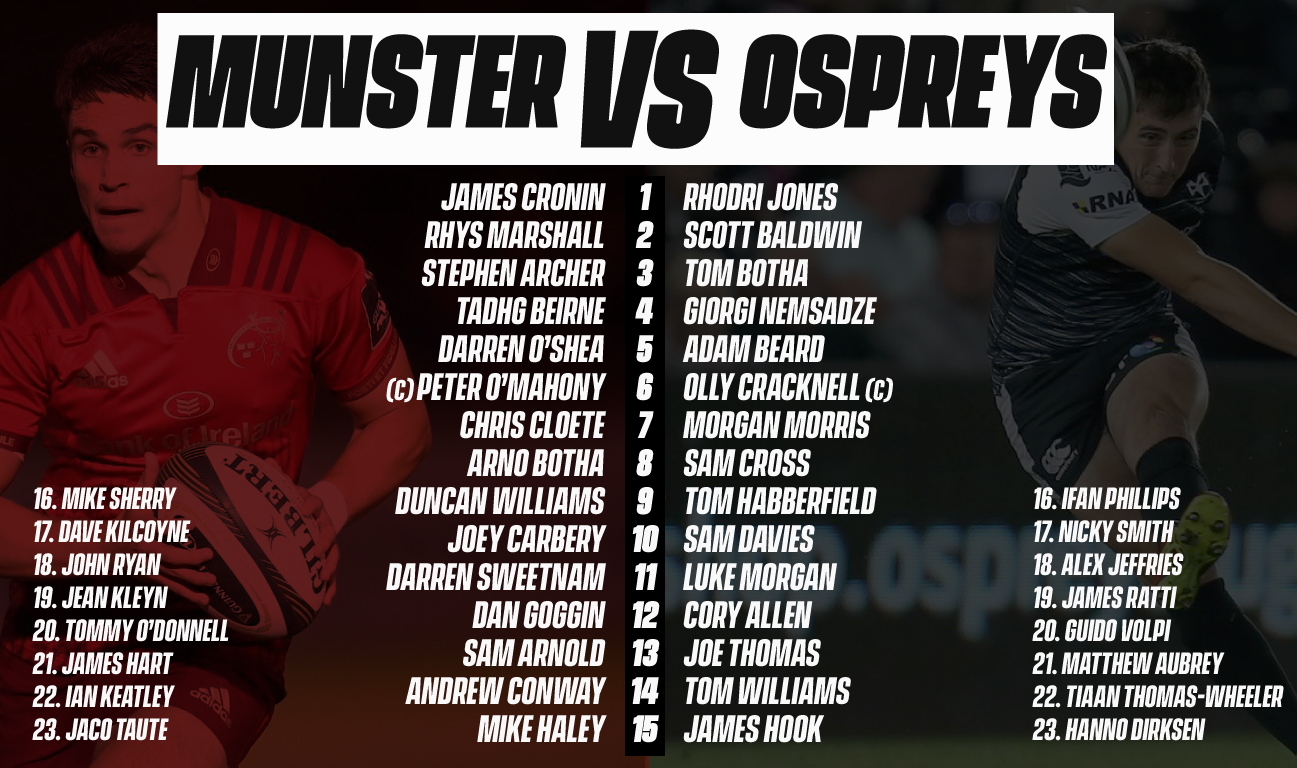 I’ll go into these teams in detail on the Blood & Thunder Podcast.

The Ospreys work in the first two games against Edinburgh and the Cheetahs was quite good but very little of it has relevance for this one. The main reason for that is the quality drop off in key members of their pack – the Ospreys without Bradley Davies, Alun Wyn Jones, James King, Justin Tipuric, Dan Lydiate, Scott Williams, Owen Watkin, Dan Evans and George North is quite a different proposition than the side who are named here. That isn’t a slight on the guys who are selected – Scott Baldwin, Sam Davies and Olly Cracknell are quality players – but it does change the complexion of how this game is assessed and executed from a Munster perspective.

The Ospreys have it quite simple. The unsaid message here for the Ospreys squad is that this game is an OK one to lose, with a losing bonus point being something worthy of praise. Their selection shows the priority for this fixture and, far from demotivating a team, that can actually free up some of the younger guys to have a proper lash at this game without much on the line.

Munster will be 20 point favourites in this one just based on the teamsheets and with that comes a little pressure – the pump challenge. When you’re a heavy, heavy favourite to win a game it can sometimes change up your processes and make you play outside yourself.

This version of the Ospreys is quite a good matchup, stylistically, for the type of game we want to play with the squad we’ve selected. If you look at the way that the Ospreys attack with ball in hand when Sam Davies is playing, you’ll see plenty of width on their passing.

They like to get the ball to a wide tram pod quite quickly and have decent hands across the pitch to do it.

When George North is on the field, the Ospreys can stack their forwards on the other side of the pitch to this action because of the power North has a wide ball carrier. North isn’t playing here but they’ll use Tom Williams – 6’3″ and 100kg to duplicate North’s role on these patterns. This frees up Tipuric as a midfield distributor and allows them to flood the other wing with heavy ball carriers. Here’s a rough example of how that looks after North’s carry.

The presence of that forward pod makes a steal on that phase quite unlikely, so they get a chance to come back across the pitch where the likes of Tipuric (who lurks in midfield a lot as a passer and centre field ruck cleaner) can switch to a potential ball-carrying role as the Ospreys mix and match on the finish phase.

When they come back across the field again in the aftermath of those phases – wide back pod > heavy forward pod > mix and match wide pod – they are vulnerable to getting turned over. Imagine how Chris Cloete might attack this breakdown at the end of phase 9.

Edinburgh slowed this one down considerably and when that happens, you’ll usually get a kick of some description out of the Ospreys through Davies or one of the midfielders.

They’ll send Luke Morgan after stabbed kicks like this one quite often if they run out of angle and momentum.

Expect Davies and Hook to switch it up at first receiver quite often to allow Davies to slide around the corner in between the 12/13 on second or third phase possession with Cory Allen being the primary back line hit up for the Ospreys off the maul and scrum. That’s when you’ll see Davies attacking the line with the likes of Thomas, Williams and Morgan coming around into the tramlines onto Arnold and Conway.

The problem for the Ospreys is the relative ability gap between Davies/Jones/Lydiate/Tipuric/King and the guys who are replacing them on everything from ball carrying to set piece. Cracknell and Cross are two decently sized lads in the back row but Morgan Morris vs Chris Cloete at openside looks a bit of a physical mismatch as it stands right now. We’ll see how it goes.

Munster’s scrum and lineout need to be leagues better than they were in Scotstoun to get the expected result in this fixture.

Against Glasgow, Munster were driven in at loosehead while our tighthead side and hooker was popped up and walked around.

Another ref might well have thrown his arm up the other way on these scrums but the perception of dominance benefited Glasgow as far as Ben Jnr was concerned and that will be true tonight with Stuart Berry. Munster must get initial dominance by any means in the early going of the first half.

If we can get scrum dominance, we can get at the Ospreys on their openside by targeting Davies channel because of the relative inexperience of Morris coming off the side of the scrum. The same goes with full lineouts, where Morris will be stationed as a tail gunner. Edinburgh pushed Ospreys quite close in the Liberty and one of the hallmarks of that game was a super solid lineout platform.

Well yes, in the case of the Ospreys, that old chestnut usually is a good idea when Sam Davies is playing – and not because he’s a weak defender.

Look at the way that Ospreys’ back row and hooker cluster around Davies on this lineout defensive set. 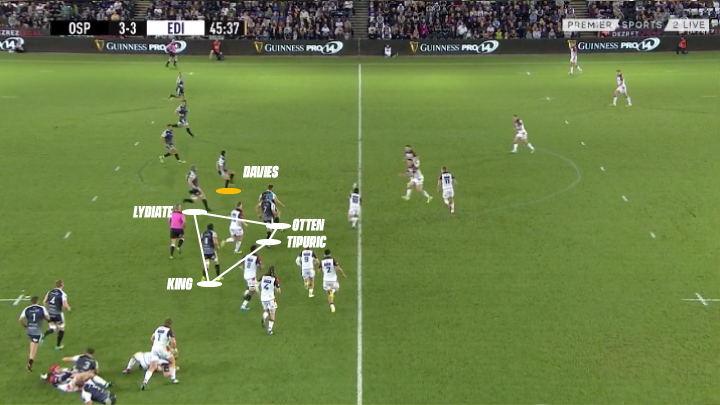 Look at the space outside and, more importantly back on the inside as the separation between mobile forwards and Ospreys heavy lifters becomes apparent? 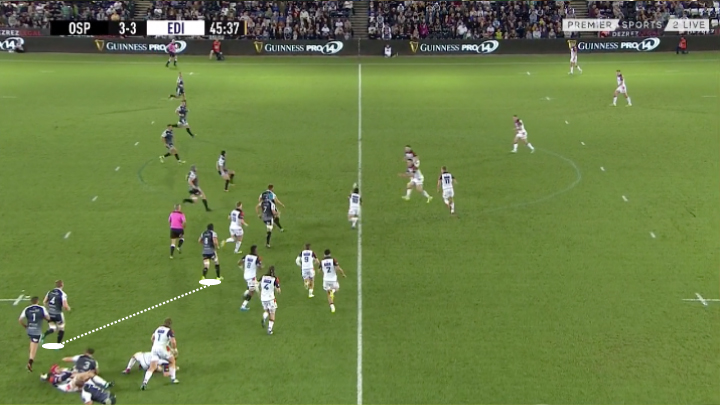 That gives Munster tip on options outside of Davies and reliable space to reverse the play to after the first phase especially because the Ospreys tend to overload on the openside when they defend lineout possession targeted at Davies channel.

Look at the alignment near Jones as Edinburgh carry this into contact.

If the Ospreys don’t slow that possession down, Jones would be left looking at this alignment on the next phase; 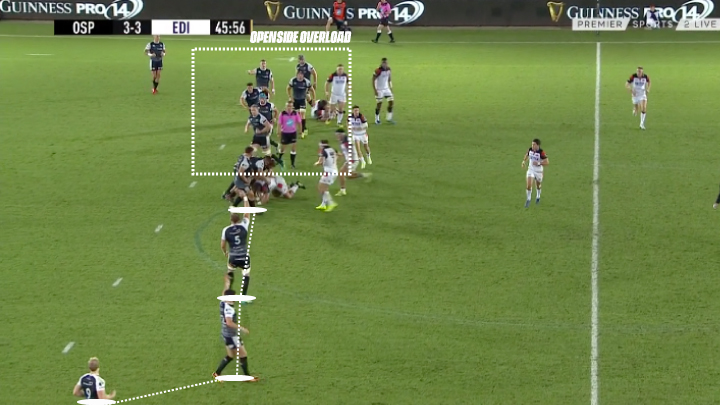 If our rucking is accurate – and you’d imagine it will be with O’Mahony/Beirne/Cloete/Cronin on the field, then we can have a real go off the Ospreys defensive reload and that goes double the more we can attack them off set piece.

If we can get Carbery effective weapons to use in the middle of the pitch – Goggin and Arnold switching on hit up lines – with Sweetnam and Haley stepping in as first receiver and as a deep-lying strike runners, we can overload Davies and Allen at 10/12 on first phase and on any back on back isolations we can work on multiphase possession.

Goggin and Arnold will primarily be hitting the ball up in this one as a kind of mini-forward pod. Expect to see a lot of Cloete and O’Mahony in the wide areas of the pitch, as well as Beirne operating as a heavy pivot. I’d expect to see Cloete being used as a kick target for Carbery on certain resets, especially on whatever side Morgan and Hook are covering.

This should be a healthy Munster win, but only if the scrum and lineout return to the level they were at against the Cheetahs.