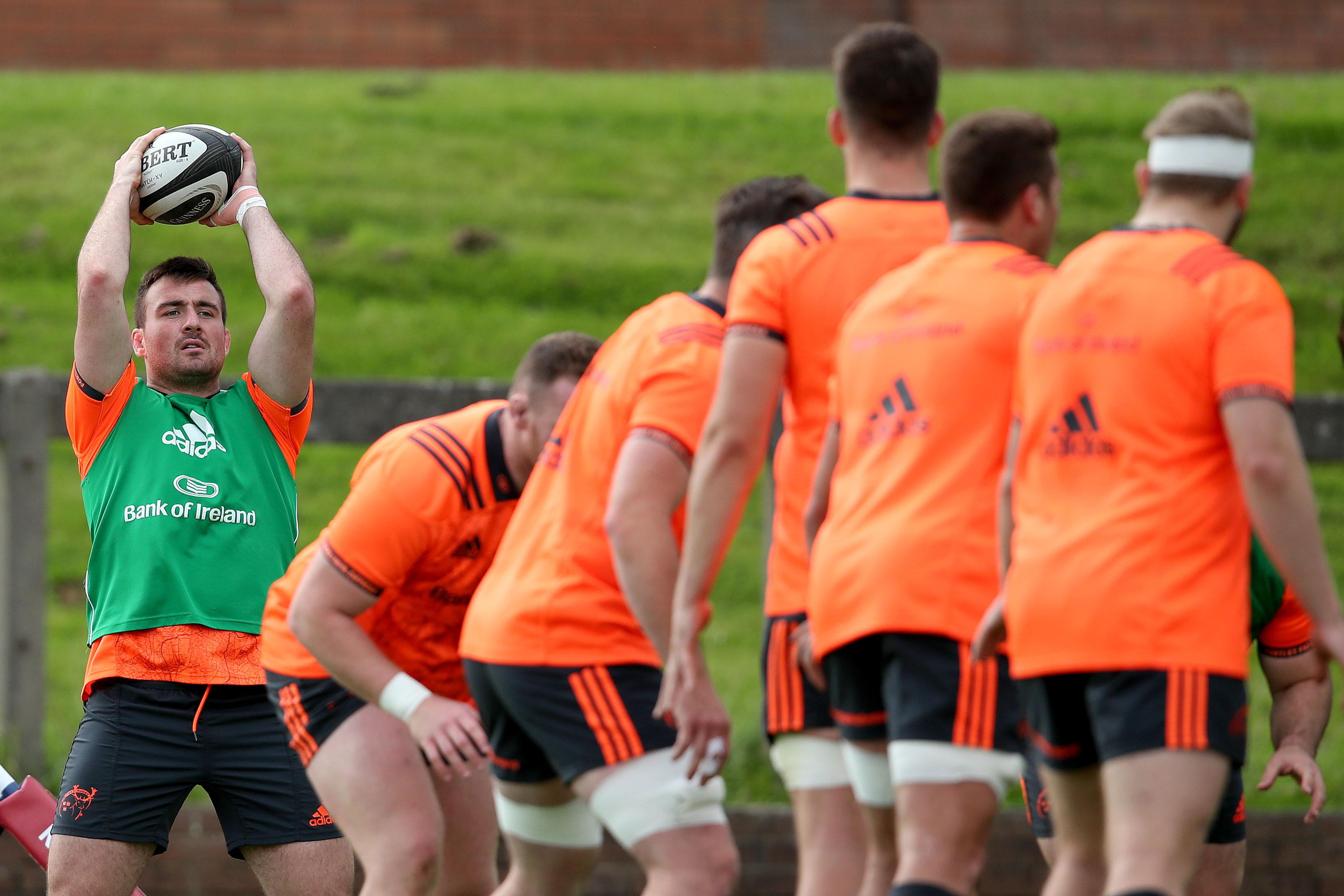 The Red Eye is a new feature that I thought might be a cool thing for Premium TRK readers. Before Munster play anyone, I try to look at our opposition’s last few games to get a read on the kind of threats they offer so I decided to put my pre-game notes into a weekly scouting article for your perusal.

This week’s game sees Bad Guy Inc. travel to Ospreylia for a Guinness Pro14 Conference A  clash that has quite a bit riding on it, even at this early stage. From a season momentum and perception point of view, neither side can really afford to lose and the “in-conference” nature of this tie means a win can  -even at this early stage – make a real difference to your final playoff standing.

The Ospreys are coming off a disappointing non-bonus point home win against Zebre and a really disappointing away loss to Glasgow – all “in-conference” – so they can’t really afford to lose against us this weekend, as if they ever could.

For our part, I feel Munster need to make a bit of a statement after two handy enough wins against Benetton and the Toyota Cheetahs. This is the game that will be listed as the first “real” game of the season against a side we beat 3 times last season.

Last season’s matches provided a similar story on every occasion bar 20 minutes in the Liberty Stadium – Ospreys spending most of their time running into Munster’s defence for not very much gain. That’s why Munster have more combined metres gained (+151m) over the three games when we only had the ball 45% of the time.

Most of those numbers came directly in the forward exchanges, as they did when Munster played everyone bar Leinster, Saracens and the Scarlets.

The result of this game will likely rest on Munster repeating this defensive dominance – or not, as the case might be.

Let’s have a look at how Ospreys did last time out against Glasgow.

The final score of 31-10 to Glasgow doesn’t really reflect the game as a whole. Ospreys had an awful lot of the ball and really should have come away with a losing bonus point at the very least. That they didn’t says a lot about their issues with forward carrying, at least in this game.

To get a proper idea, we need to look at their lineout set up. I’ve listed them here;

Yes, I do this for every game.

Anyway – what do we notice about these lineouts? First, let’s have a look at the individual traits I spotted.

We can tell that their loosehead lifter is the man to track when it comes to who the target jumper – he was involved in almost half of their lifts, even when he had to move to the middle to do so.

Their tighthead – Fia – is a decent lifter but he isn’t very mobile so he stays at the tail as a close range lifter in most cases. He’s also a bit of a forward drifter after (and sometimes before) the lift which doesn’t sell their maul feints very well at all.

Other random notes is how “looky” their #8 is when he’s a set lifter – he can’t help but stare at his target’s feet, even when he’s decoying. Generally their speed into the air is average enough so there might be value in actively challenging them in their primary target zone – the rear of the lineout.

Have a look at their target zones on the table – six of their throws are to the rear of the middle or tail. This tells me a few things; they don’t really want to engage in attacking mauls if they can avoid it and they want to get their backs onto the ball as quickly as possible.

The Ospreys mauled once in this game and got turned over, so minus the likes of Alun Wyn Jones, I think they’ll want to keep any lineout ball moving to the backs if at all possible. This tells me that Munster might be able to afford to burn a counter jumper in the rear middle without much worry of a maul, especially if the ball is outside our 10m line.

When we look at the Ospreys forward carrying numbers in this game, we get an idea of why they’re so “backs” focused of their lineout.

Glasgow’s numbers are blown out by Ashe making 73m off 9 carries, but even without his numbers (inflated by an intercept try) the Scots comfortably out carried the Ospreys pack on a carry per metre basis.

This was a problem for the Ospreys last season and it reared its head again in this game. When you’re getting out carried on 65% possession and with 63% territory, it tells a story of forwards that are struggling to get over the gain line.

But to say that the Ospreys are toothless is far from the truth.

The Ospreys backline is a bit of a quandary. They have some talented footballers back there – Davies, Allen, Hassler, Evans, Fonotia and Giles are a pacey, dangerous crew who run some exceedingly clever lines.

Evans link with Sam Davies is particularly dangerous and that combo had Glasgow in trouble on a few occasions – like for their try in the first half.

Look at how late he comes into the line here; Davies flat line times the gap perfectly and Glasgow are sliced open right up the middle. Evans tracks Davies at 45 degrees until the point of the pass and, using Fia as a “corner” he isolates Glasgow’s #5 extremely well and gets under the posts.

The Ospreys ran this Davies to Evans deep line a few minutes before this try and almost scored another try off the back of it.

Evans tracks Davies from deep and use Fia as a “corner” – this time outside him – and it’s only a good last ditch tackle from Russell that saves the day for Glasgow.

When Fia is the outside forward on phase 3/4 we have to watch for Evans deep run either side, especially when Davies has possession.

In general, Ospreys run a lot of decoy action in midfield off Davies. He’s a real focus for Ospreys patterns, and for good reason – he takes the ball flat to the line almost every time and has the pace, step and passing to tear teams apart when he’s on form. Just like he did to Munster last season for 20 minutes in the Liberty Stadium.

Here’s a move the Ospreys use quite a bit and their timing on it is quite good;

Look at that hard line from Fia! Davies pass to Allen is perfect but Russell’s excellent wide read stops this move. Tipuric’s reset is worth looking at – a hard pull back on his footwork to give that pass option – and that tells me this was a pre called routine to get Tipuric and that wide pod off down the wing. Well done Russell – but Ospreys’ desire to get wide is the hall mark of most of their best work.

Look at these examples;

On our ball, there are a few areas I feel Munster could well be successful. As with the games last season, Munster should have some joy in the tight forward channels that Glasgow had in the previous game and, on last season’s evidence, the good forward gains we’ve had in the last few games against the Ospreys.

Other than that, we’ve a few key areas I think we can exploit.

Lineout Maul / Speed In The Air

I mentioned earlier about Ospreys average speed in the air. They can get away with that on their own ball but in defence, it often makes them a target around their jump pods.

This slow pace in the air means their opposition can often claim clean ball at the peak of the jump with little in the way of a counter challenge.

Look at this example at the tail of the lineout;

If I’m the Ospreys forward coach, I’m wondering what Bradley Davies was doing here; he’s extremely fortunate that Glasgow didn’t take this ball down and maul right through that sloppy pocket his half jump (that King & Fia had to step in to “lift”) left in the most vulnerable maul position in the lineout.

This wasn’t the only lost cause lineout Ospreys tried to jump for;

Maddening. Why is King trying to jump with Tipuric behind him? If Glasgow send this one to hand, they could have easily mauled through that pocket of disruption at the tail.

Their alignment, too, leaves a lot to be desired;

Again, they’re fortunate that Glasgow went to the half back here (they were trying to make an alley for #9 to attack in front of Tipuric) instead of, again, mauling the shit out of this from the middle back towards the touchline. Clustering to the back like this means that any ball to the front takes extra time to (1) get in position defensively and (2) counter maul.

Why did Ospreys leave two lineout defenders guarding half the line? If they leave that kind of space for Munster to attack we’ll maul penalties out of them all day like they’re a broken ATM spitting out fifties.

Otherwise known as the “Sam Davies Equation”. Everything this mercurial young flyhalf gives you in attack (and he brings an awful lot) he costs you in defence. It’s not that he’s not a brave defender – he certainly doesn’t shy away from contact – it’s just that he struggles to make dominant tackles and there’s nowhere that is shown up more than on set piece defence.

Have a look here;

He’s too eager to get a “physics hit” – basically using his pace to try to up the volume of his hit – and shoots out of the line. Glasgow ship the ball into space and rush into the disrupted line to score under the posts.

These defensive issues are recognised by those around him – look at how the outside defence narrow around the 10 channel.

Habberfield and Allen have to cluster around Davies because of the hard decoy line and that has a knock on effect on the space out wide. Imagine Chris Farrell or Jaco Taute hitting that line?

This defensive narrowing isn’t isolated to set piece either – look at it pop up here after two phases;

Munster’s powerful midfield and lineout maul can be used to expose this structural weakness in the Ospreys’ defensive pattern. The 10 is usually an endemic weakness on set piece anyway but Davies slight frame and defensive weakness (made 4 tackles and missed 5 against Glasgow) mean that he can be targeted again and again.

He has a few other exploitable traits too.

His propensity to throw a pass he’s committed to on the gain line regardless of what’s outside him;

Something for our midfield, back row and wingers to pay attention to.

Beating Ospreys certainly won’t be easy but we do have the roadmap to victory. In essence, it’s the same as last season – let them have the ball, hurt them in defence, track their deep runners and then maul until they gas and the game can be won.