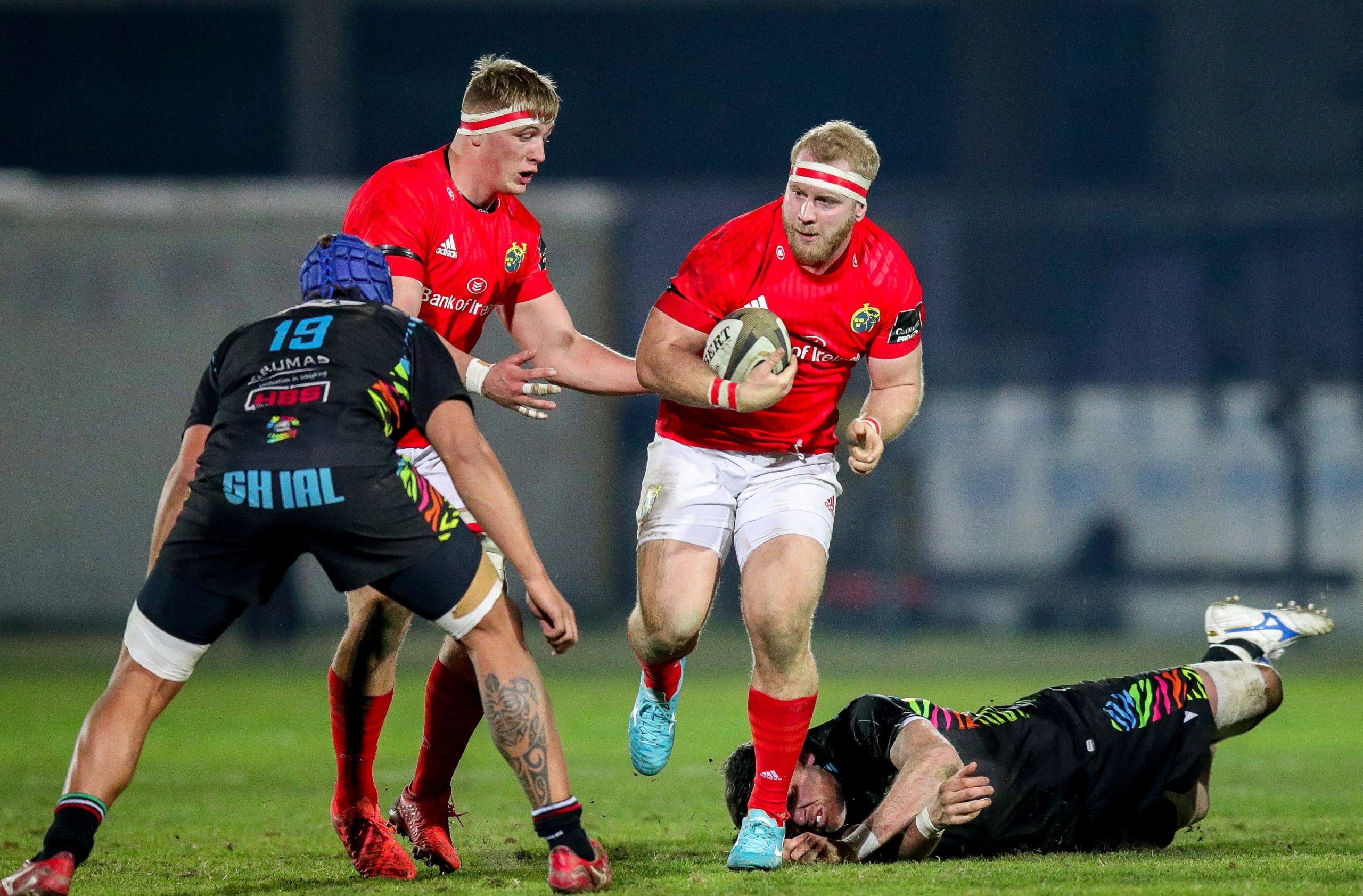 The first weather forecast for this game changed how both sides would have to approach it.

Storm Jorge – like the other bus full of storm people since October of last year – is arriving this weekend and bringing high winds and rain, which is particularly awkward because I didn’t get him anything. Why can’t he just bring a bag of cans or a swiss roll, like normal people?

This is an important game. Munster currently sit second in Conference B, two points behind Edinburgh and three points ahead of this weekend’s opponents, the Scarlets. A loss for Munster here – with the balance of games yet to come – would make finishing top of the conference a hairy affair. A win for Munster puts a workable distance between ourselves and Scarlets and zones in on the two-horse race that we’re looking for. Edinburgh’s schedule – coronavirus allowing – has them playing Cardiff at home on Friday night and then heading for a two-week tour of South Africa with their game against the Cheetahs being a likely sticking point for them. Then they have a Challenge Cup quarter-final, then they have Benetton at home (as it stands).

They play Ulster in Belfast thereafter – another sticky game – and before taking on the Ospreys. That Ospreys game could well be followed by a Challenge Cup semi-final and then Munster go to Murrayfield for what could be a pool decider. But to get to that point, we’ve got to deal with the Scarlets, who will only get better from here as they re-integrate Liam Williams back into the squad, clean up their injury list and get the rest of their Welsh internationals back after the Six Nations.

A win here, with a trip to Llanelli to come, is vital.

Anyway, outside of all that, Storm Jorge changes the context under which this game is likely to be played.

Whatever happens, it’s probably going to be wet – either raining during the game or with a pitch that has previously been heavily rained on – and almost certainly being played in high winds. With that in mind, it’s no surprise to see both sides go with a 6/2 bench split for this game. The logic is sound, from both coaches, and will have likely coloured their selection and tactical decision making for the week. The weather conditions aren’t conducive to wide passing so it stands to reason that more ball will be carried through the forwards and, ultimately, be a game decided primarily on the set-piece and the quality of your territorial game.

Adverse weather, like we expect here, asks a key question of your squad.

What is the most effective way to move the ball up the field when expansive passing opportunities are relatively limited?

If you’re playing into the wind, you need to carry the ball a lot because you probably won’t be able to exit through the box kick with much distance. Passing the ball too much beyond #10 is a risk too because greasy conditions plus a strong wind (with behind you or into you) usually equals a lot of spilled ball, a lot of fly hacks and a lot of players sliding for a ball as it skids over the try line 40m behind where it all started.

We want to avoid that if at all possible but we still need to move the ball down the field effectively. That puts a lot of responsibility on the #10 to control the game through tactical kicking. Kicking off #9 in strong winds (especially when playing into the wind) can mean a dramatic loss off distance high trajectory exits so giving the #10 more kicking opportunities is sensible. They can adjust their trajectory and have a better chance of threading the backfield needle on “with the wind” touch finders or hoisting contestable kicks a fair distance away when playing into the wind.

That brings us to the opposition.

Based on their last few games, what do Scarlets want to avoid in this game? Defensive lineouts.

They’ve had a torrid time on their lineout over the last two rounds. Their home game to Edinburgh – played in broadly similar conditions to what we expect here – was dominated by Edinburgh’s reading of the Scarlets’ lineout schemes. The Scarlets have selected the same pack for this game so, all things being equal, a lot of the same looks should be there.

The key man for them is Aaron Shingler.

Or, more specifically, their back row front jumper which, in this game, will likely be Aaron Shingler.

Almost all of Scarlets lineout schemes were targeted to Shingler as a jumper at the Two or used Shingler as a decoy jumper to open up a timing window for Lousi or Rawlins to take the ball at Four. 69% of their visible lineouts over the last two games have used these two schemes. Against Edinburgh in adverse weather conditions, they made up 100% of the lineouts that were broadcast in full.

Shingler jumping at the front straight up or with a rock back feint generally looked like (A) in the below graphic. The Shingler jump feint looks a lot like (B) with a double jump feint sometimes being used by #4 to get #5 into the air. 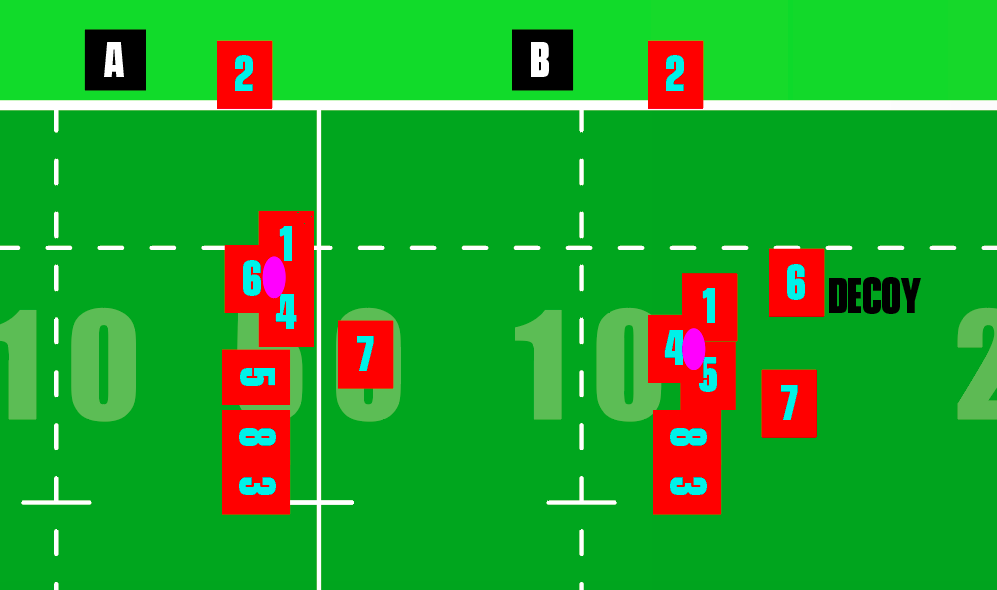 Let’s have a look at the first scheme; Shingler (or back row jumper) jumping at a pace ball at Two. Look at the similarities on each scheme with regards to position and how they time the jump. Once the line is set, it’s generally a short-timer from throw to jump with slight variations on the exact jumping position.

You see a lot of Edinburgh hands getting on those throws, right? They had a dedicated jumper marking that spot at the front and timing off Davies, who looks a bit

With the wind we’re expecting in this game, Scarlets will look to hit the same kind of positions as Davies is a little iffy when the ball goes further back in the line.

The other primary scheme – back row front jumper decoy throw to Four- looks like this;

You can see the double feint variation there – where the second row behind Shingler feints a lift or jump – but the overall theory behind the scheme stretches across all of these lineouts.

When we look at the lifters in these examples, it’s mostly Red #1 (Price) or the original back lifter (Red #4 or Red #5) so those individuals give you key parts of their launch architecture on these schemes.

They like throwing to Red #6 and usually use Red #1 and #5 to lift him at Two. When they go off that scheme, they generally use Red #1 to lift Red #4/5 at Four with feint variants.

So what does this knowledge give us?

Clear instructions to tightly mark the front of the lineout with an explosive jumper – Wycherley – to attack their A Scheme to Shingler and put Holland in position to read the movements of the middle position to target any of their B Scheme throws.

Once Shingler goes off, you see Scarlets start to use their second-row jumpers as forward running decoys to hide more expansive throws to the tail.

We only saw these against the Kings in good conditions, though, so these may not appear here if the weather is as predicted.

If we can get disrupt their lineout, we can hurt their launches and decrease the quality of their attacking platform and, more importantly, their kicking platform. If we spend some of our possessions in driving the ball low into touch, we can pressure Scarlets in a way that could lead to errors on their part on scrappy possession or even clean turnovers in dangerous areas of the pitch.

That’s an efficient way to move up the field when we’re against the wind or a way to buy 30m+ when we have the wind at our back. If we can rattle Davies throw and force Scarlets to narrow their lineout, we know where they have tended to throw in similar conditions so we can attack their possession with confidence.