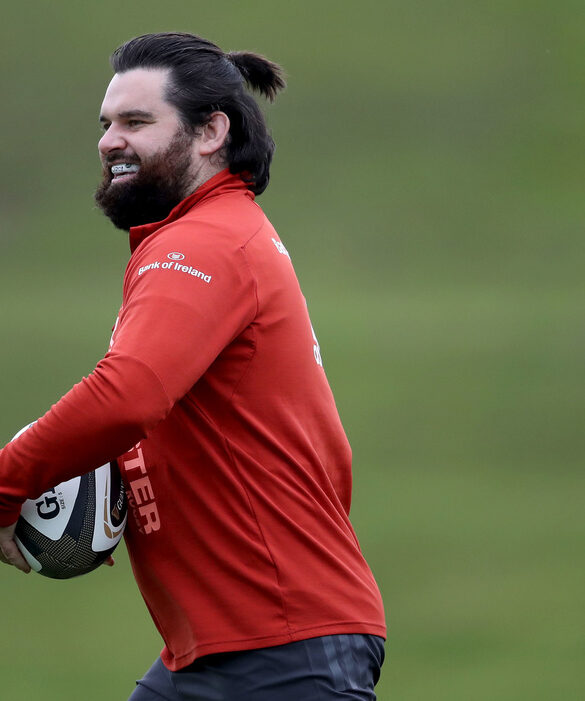 By Tom Savage6 min read
So it’s Monday Night Munster and the first instalment of a 16-week block of games that, we hope, will entail PRO14 and Champions Cup up until the end of January. I say “hope” because if this year has taught us anything, it’s that nothing is for sure until the game is kicked off. England thought they were playing the Barbarians this weekend but the Trattoria Twelve had other ideas.

My point is, the coronavirus has changed everything and as we head into a level five lockdown here in Ireland, we’re reminded every day of the privilege we’re afforded by having our jobs continue. The elite sports exception means that rugby continues but we only exist as long as the bubbles we erect around our squads remain intact. An entire industry depends on the sanctity of that bubble. You can catch COVID19 off someone standing too close to you in a shop if you’ve got bad luck but if you expose yourself to parties or other activities that are against the rules right now, hundreds of jobs could be at stake. It’s too much pressure for any group of young men really but it’s what we’re asking of the senior and academy players all over this island over the next few months.

We’ve seen what happens when a small group bins off the rules for a few pints and a pizza this week. A game that charities, the RFU, the Barbarians, a TV outside broadcast unit and others were reliant on, never mind some players in line for debuts that they might never get back, got cancelled on a few days notice because a group of people thought their fun was more important.

It’s a privilege that our business gets to continue while others have their doors closed. We must respect that gift and strive to go above and beyond what the government recommend until this is all over so that we can keep the show on this road. We are six bad months away from disaster in this sport, so players have to be athletes and monks until the country can relax a little.

Anything less would be disrespectful to fellow professionals, the non-playing people who depend on this industry directly at the provinces and the IRFU and would be a smirk in the face to the hundreds of thousands of people currently wondering if their business will survive the year.

It isn’t fair, it sucks, but it’s what has to happen if we want the game we love to continue mostly as we’ve known it.

Anyway – the rugby. Cardiff Blues will rock up to Thomond Park this Monday night on top of Conference B with the best defensive record in the early going of the season. They’ve conceded the lowest amount of tries and points, sure, but they’ve won the most turnovers in the league over the first two rounds. They’re tough to break down because they do such a good job of winning back the ball on the floor and in contact.

Sure, their win away to Zebre first up was a bit of a slog but they looked really impressive last time out against Connacht and they come into this game with a lot of momentum. The same is true of Munster. Our two early-season wins over the teams projected to be our primary opponents in the conference this year can’t help but build confidence. Last-minute wins over strong Scarlets and Edinburgh teams back to back? What’s not to like?

As ever though, test window PRO14 rugby provides a challenge all of its own and, for the time being at least, it plays a large role in the winning and losing of this tournament, at least from the perspective of earning your playoff positioning. So, while the internationals are away, the importance of the games goes up, in my opinion. Leinster have dominated their conference repeatedly by bossing games in these windows and coasting to a top-placed finish. The onus will be on this Munster team to begin to do the same and no better time than right here against a confident Cardiff Blues outfit that, while shorn of their internationals, will still be a dangerous opponent. 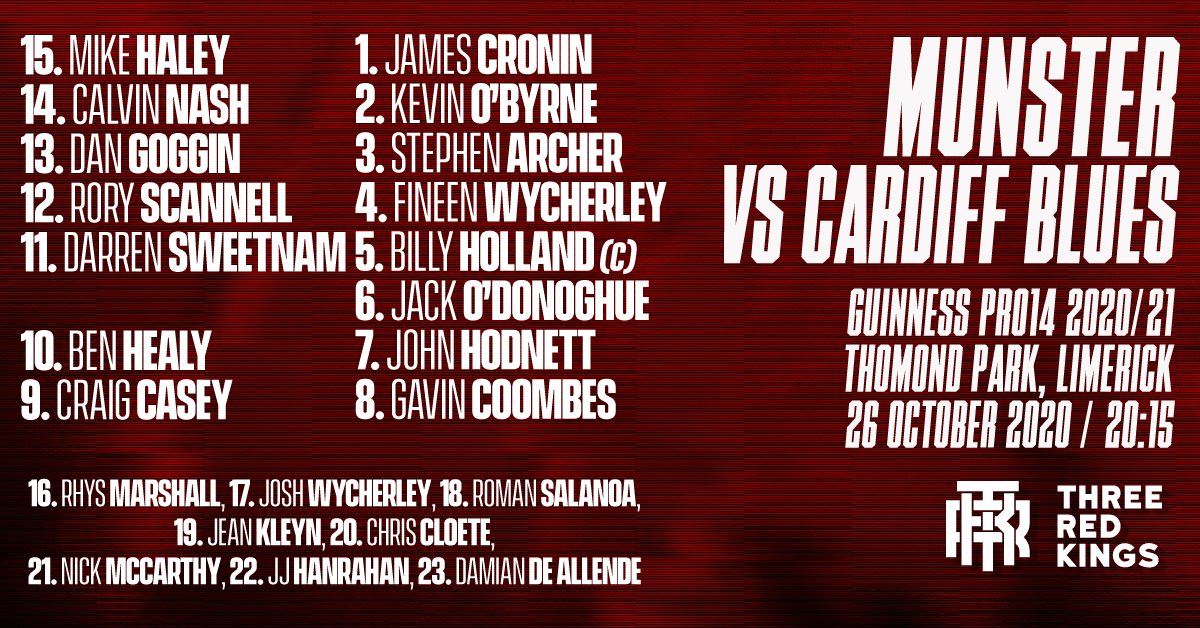 Cardiff’s defensive work speaks for itself in that Munster cannot afford to be sloppy at our attacking breakdown if we want to beat these guys but their attack is worth speaking about too.

The Blues use a variation of the 3-2-X oscillating shape that is becoming more and more common around elite rugby but it’s their action on the reverse that marks them out as a little different.

Have a look at this sequence here.

You can see the basics of the shape here – three hit up off the wide ruck, the next phase hits a splitting two pod off #10 and the third phase hits the wide forward on the edge of the play. Three phases move them across the field and they get the width that any good 3-2-X shape needs to run as it comes back across the field.

One really good benefit of 3-2-X (and a positional challenge) is the versatility it gives you on the reverse as long you (a) get the width you need and (b) don’t burn numbers securing the wide ruck. This is a good example; 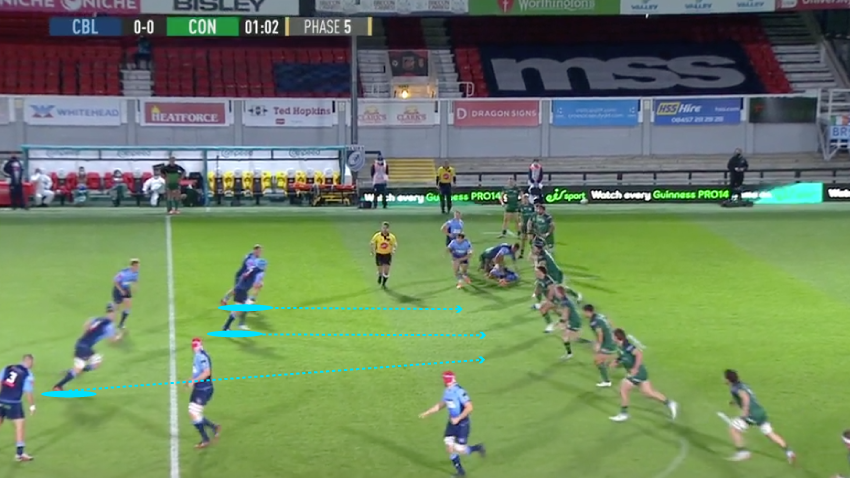 A late-arriving deep runner from midfield pinches in extra Connacht defenders and the next phase looks more like a 1-3-3-1 shape than anything – have a look;

The wide three pod splits around Evans, which opens a passing lane to Morgan who has Lee-Lo, Adams and Botham (Ian Botham’s grandson, btw) as the wide forward breaking outside with Williams supporting on the inside.

The splitting three pod combined with Morgan’s slide across the space creates a massive 4 on 1 isolation on Alex Wootton in the secondary defensive line and the fullback in backfield coverage.

When the play swings around the edge, Wootton has very few good options and Cardiff have managed to engineer a massive overload through regular phase play.

Cardiff can mix up their action on that reverse 3-3-1 too if they spot the opposition drifting out wider to cover the wide three pod and the slider – Evans can break back inside and their scrumhalf is always running that hard support line for an offload.

The keys to this are Cardiff’s explosive outside backs – Lee-Lo, Halaholo, Adams and Amos – who surge around these forward shapes with forwards like Botham, Robinson and Myhill well capable of keeping up with them. Cardiff’s ideal selection would have Josh Adams and Owen Lane in a twin Power Winger set up but Amos is well capable of filling the same role. Cardiff will often “unhinge” a winger to loop around and overload a side of the field within a few phases of a set piece.

Amos loops off his wing to pair up with Adams and gets a pass to score the opening try. Cardiff will be without Adams in this one – a pretty big loss to their overall effectiveness with this scheme – but they still have explosive runners to take advantage of wide compressions. The key for Munster will be making good reads and readjustments as Cardiff set up for that reverse 3-3-1. Ideally, we’ll attack them at their most vulnerable point – the wide ruck at the end of the first progression across the field.

From an offensive perspective, this is a great opportunity to get a look at Coombes, Wycherley, Hodnett and Goggin as collision winners and key parts of our overall attacking scheme. Cardiff are far from pushovers but if Hodnett and Coombes, in particular, can build on what we’ve seen from them already I think Munster have the ability to stress Cardiff in a way they haven’t seen yet this season.