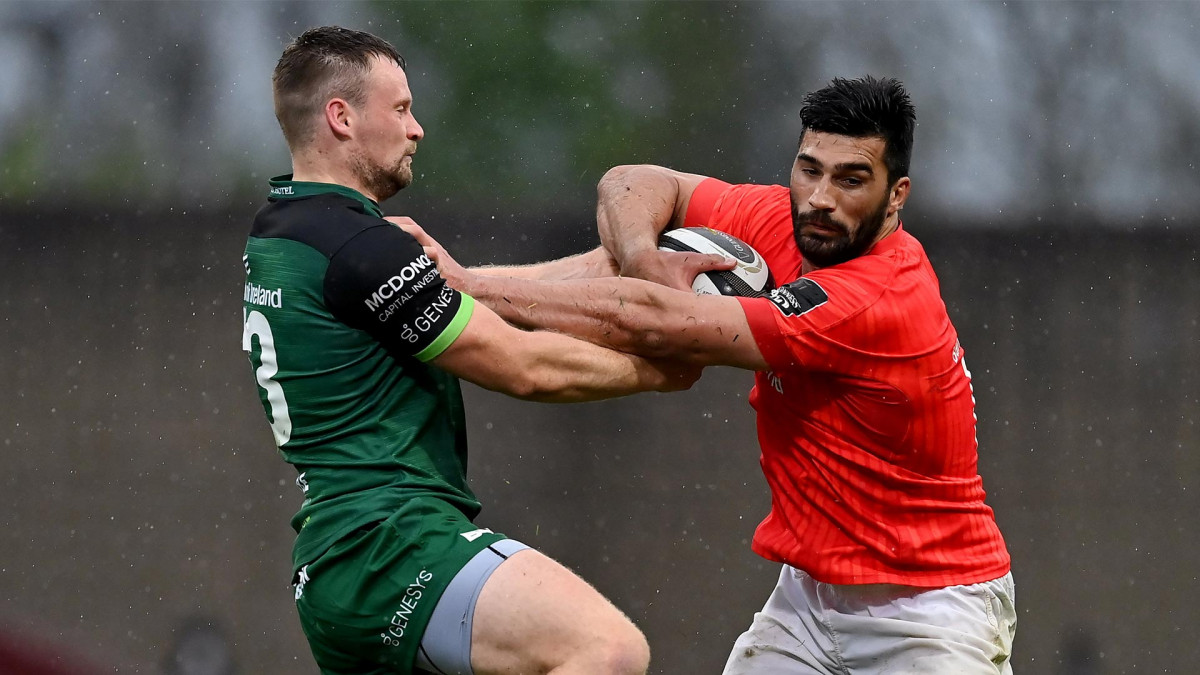 By Tom Savage5 min read
The loss to Connacht hasn’t gotten any better with age, let’s put it that way. More like a carton of milk than a bottle of fine wine, in that regard, take it from me because I’ve watched that game back five times in full over the last two weeks. I’m a masochist, you know this. It’s part of the appeal of this site. I pore through the painful footage so you don’t have to.

My crib notes for that Connacht defeat can be boiled down to the following bullet points;

The sting of defeat in the last round really put to bed the idea that this is a “nothing” tournament. There’s no doubting that it’s a new, one-off tournament – the PRO16 (not the name it’ll be called when it’s all said and done, but it’ll do for now) will be a different format – but wins are still wins and losses are still losses. Connacht, for example, certainly didn’t celebrate at the final whistle like a team who’d just won a meaningless game, let’s put it that way. When good teams play each other, the result is always important.

That brings us to this weekend. Munster can still win this block of the side of the tournament but we need (a) Benetton to slip up over the next two games at least once and (b) two bonus-point wins. The two remaining games, Cardiff in Thomond Park this weekend and Zebre in Parma next weekend, seem eminently bonus-pointable™ on paper but they come with their own challenges.

Squad rotation, for example, which Munster have committed to doing evenly throughout the squad, where injury allows. Johann Van Graan confirmed as much in the aftermath of the defeat to Connacht two weeks ago.

As a group we said there are lads that are going to get opportunities in the coming few weeks; we are not going to vary from that just because we have lost the game.

This comes with benefits – such as an engaged group who know they’re all going to get minutes across a block of games, fitness allowing – and drawbacks, such as players coming in cold and finding it difficult to get up to the pitch of the game, which I think affected a few of the guys against Connacht.

As with two weeks ago, if Munster are “off” in this game, we will likely lose this game because Cardiff are a dangerous, chronically undervalued opponent who are stronger than they have been the last few times we’ve played them. I’ve covered Cardiff quite extensively this season, both pre and post-Dai Young, and they are a side that can really threaten us if given the position to do so. 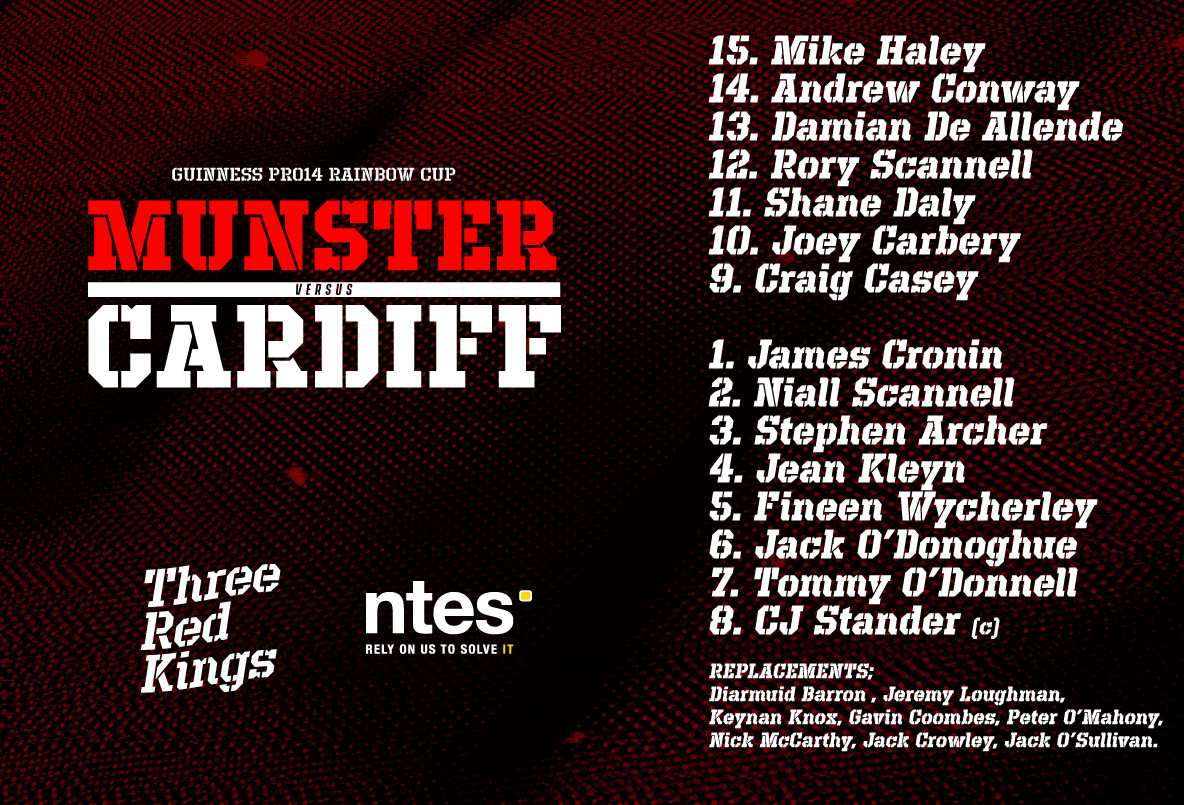 The management of position will be a key part of this game. That is true of every game but it’s particularly true when you’re playing Cardiff, who I rate as a much better attacking side than the stats currently show.

As I covered in previous Red Eye articles, Cardiff run a pretty tight 1-3-3-1 shape under Dai Young that hinges on the variety and accuracy of their halfback pairing, Tomos Williams and Jarrod Evans, their power wingers and their outside strike runners.

Cardiff’s role division in the backs plays into their system really well, in my opinion. If you’re going to play a 1-3-3-1 as Cardiff do – where they hit two pods of three forwards in the space between the lateral 15m lines – with options on the screen, the power you carry in the wide channels has to be (a) actually powerful and (b) you have to be able to support the wide surges that win the wide ruck positions that make the system run.

The wider the ruck position on the phase, the better the action between the two pods of three as far as Cardiff are concerned. When the ruck positions are more compressed after two hits off the three pod, their action becomes a little more complex and open to possible intercepts when Evans or Thomas go wide.

Cardiff usually run with Halaholo and Lee-Lo in midfield but, with Lee-Lo out of contention for the last few weeks, they’ve made a few changes to their midfield. Ben Thomas, who started at #10 against Munster back in February, starts at #12 again in this game after impressing against Scarlets in the last round. Does that change the four hitters/two passers outside back role division that Cardiff usually go with? No – with Amos at fullback, Cardiff keep the same system but with Ben Thomas, it seems like they have a better fit with the 1-3-3-1 system with Lee-lo out.

With Adams, Harries and Amos – all power outside backs when it comes to classification – providing those wide ruck points and, on occasion, looping around as pullback options, Cardiff have the ability to consistently hurt you with just their basic system.

You can see how Thomas fits in well as a central second playmaker here;

When you throw in Evans ability to break and beat defenders from that natural hinge point between the pods – he beat 28 defenders during the last PRO14 season, the eighth highest in the league – and you’ve got a team that you don’t really want to be defending in your half for multiple phases. They will get wide surges through Adams, Harries, Halaholo and Amos, they will stretch their two pods across the pitch and Evans/Thomas/Halaholo will break up the middle if any of our forward defenders overcommit to their forward units.

Cardiff’s biggest weakness, for me, is playing out of their own half. A relatively conservative kicking game off #10 that puts their back three under pressure to kick in return – Amos, in particular – could pay dividends but, in reality, I think any scenario that puts Tomos Williams and Jarrod Evans in a position where they have to exit accurately has the potential to give us good launching points in their half.

Any strategy that puts Cardiff inside their own 10m line for their starter plays is a good move, for me, even if it means playing quite conservatively in our own half initially. With the right kind of wing pressure on the chase off #9 and #10, we have the mobility and work-rate in our back to be really aggressive in their half of the field on D and at the break down if we have the kicking game to pin them in place.