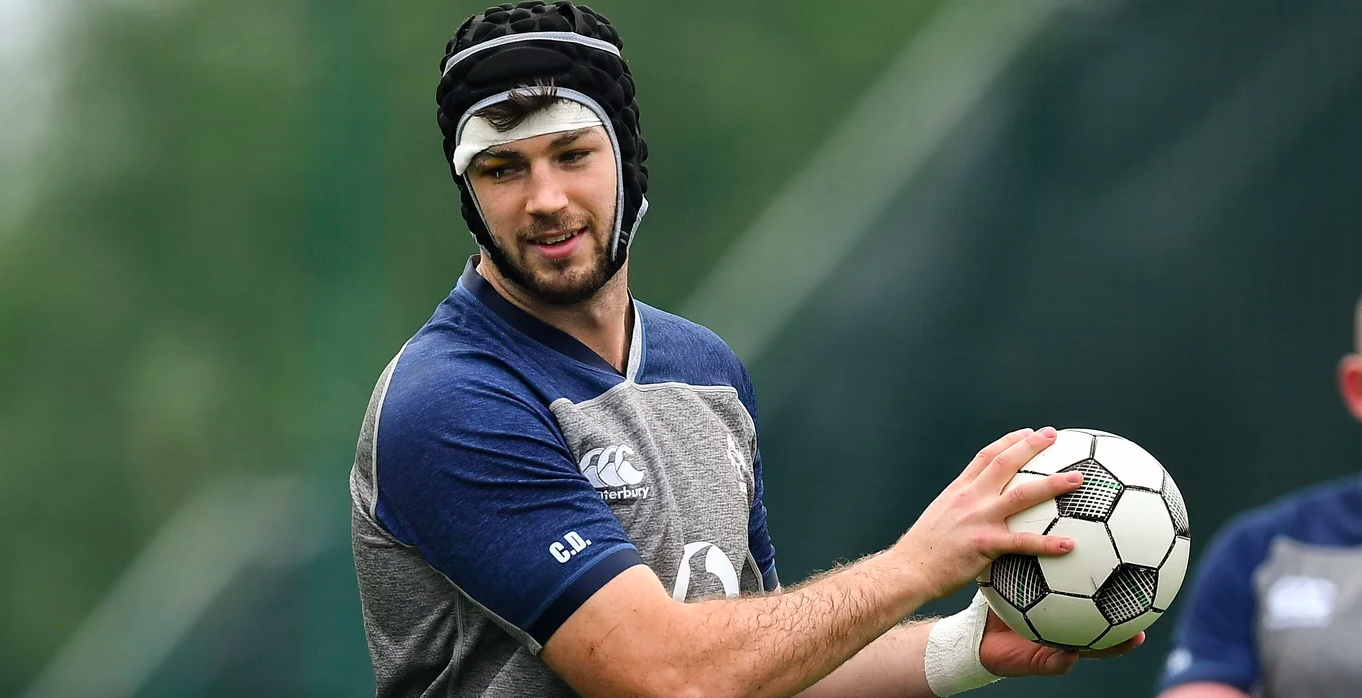 This game isn’t really about Scotland.

They’re a dangerous outfit, albeit a reduced one without Finn Russell, but any side with the likes of Hamish Watson and Stuart Hogg in it will need serious quelling. Scotland certainly won’t want for motivation either. Ireland let the air out of the Scots tyres in Yokohama, pulled them out the windows and then beat them out the gate with a physical, grinding display that set the tone for a disappointing Scottish exit in the pool stages. Why wouldn’t they come to the Aviva this weekend and want to spoil the party?

It’s the dawn of a brand new era in Irish rugby and I’m beyond excited to see where it leads.

I’ve covered this Scotland side quite a bit over the last year.

I’ve got GIF Rooms, Wally Ratings and Red Eyes going into how this Ireland side stack up against Gregor Townsend’s Scotland and for the most part, all of these observations still hold true this weekend despite a few debuts and left-field selection calls. I think that Scotland’s main issue against the bigger nations – front five platform setting – isn’t something that can be fixed inside six months and most of the problems they’ve had with Ireland in the last 18 months haven’t gone away, or been made any bit easier by Finn Russell chilling out in Paris this weekend rather than chilling out onfield at the Aviva.

Scotland are a worse side without him, and that’s just a fact. It doesn’t mean that they can’t win this game, it just makes it infinitely more difficult without the matchwinning moments that Finn Russell regularly produces.

A lot of Scotland’s work will be based off their set-piece launch and on transition as I would expect Ireland to dominate key spells of settled phase play possession in this game.

The real question is how we expect Ireland to play with that possession.

Mike Catt has taken over from Joe Schmidt as the man steering Ireland’s attack in the aftermath of the World Cup and it’s only when you take a look back at Schmidt’s tenure do you realise the scale of the man’s influence on Irish rugby. There are players in this squad who have vast amounts of time playing on Schmidt run teams (for Leinster first and then Ireland) and I don’t expect everything to be “deprogrammed” all in one go.

So if you think that watching a Schmidt-less Ireland means that we won’t be going to the kick chase off a slow box kick, I think you’re probably going to be really disappointed around six times. All teams box kick for position off slow ball or to exit, and that won’t change here. What will change?

I think a lot will come down to Mike Catt.

There were a few raised eyebrows when Catt was announced as the new Irish attack coach but the synergy made sense. Farrell had worked with Catt previously at England, so there was a clear link there. That said, the reaction to Catt’s appointment was a little lukewarm. When the IRFU announced in June 2019 that he had been signed to take over Ireland’s attack after the World Cup, there wasn’t parties in the street, let’s put it that way. I would hear variants of “well, Italy aren’t any great shakes, are they?” as reasons as to why this coaching hire was a low-key one.

And yes, if we look purely at results, you can see plain as day that Italy have had a very difficult time of it over the last few years. Since Catt took over Italy’s attack in March 2016, Italy have marked only ONE win over a Tier One nation – a 20-18 win over South Africa in November 2016 – and have lost every single Six Nations game since that point.

How has their attack gone? Well, they scored the 4th most amount of tries in the 2018 Six Nations (12 tries) but have bounced between 5th and 6th in tries scored every other season. Nothing remarkable. Yet, as someone who has a vested interest in Italian rugby and who’s watched all of their 2019 games, I’d have to say that Italy have improved from an attacking perspective.

They are certainly better on transition and they have a system that seems like it suits their players but they have been consistently undone by a collection of incomplete test level front five forwards, halfbacks and link players in my opinion.

The problem has been that while Italy have improved on their structures and style since the 2011-2015 era, their opponents in the Six Nations have continued to improve relative to Italy’s improvements in the years since.

Italy have improved, but not by enough to regularly compete with the other Six Nations sides who have also improved over the same time period.

I’ll caveat that by saying that there are two Italys.

Since 2017 – a year into the O’Shea/Catt run – Italy have gone 1-1 with Japan and Fiji and then put away the likes of Georgia, Canada, Russia and Namibia without much in the way of fuss. When they’ve played in these games, they’ve approached them like a “big” team, which is a marked difference to how they approach much of their Six Nations opponents.

So what can we learn from how Catt likes to play from this “Two Italys” theory?

Against Big Teams, Italy have tended to play a pretty deep 1-3-3-1 forward shape.

You can see the two pods of three in the central space here with Federico Ruzza operating as the wide pod lone forward. There’s quite a bit of separation (width and depth) between the primary attacking line of the forwards and the backs and wide pod forwards.

What do I mean by “separation” in this instance?

I’m referring to the space between the primary screen line and the secondary line attacking off the link player. 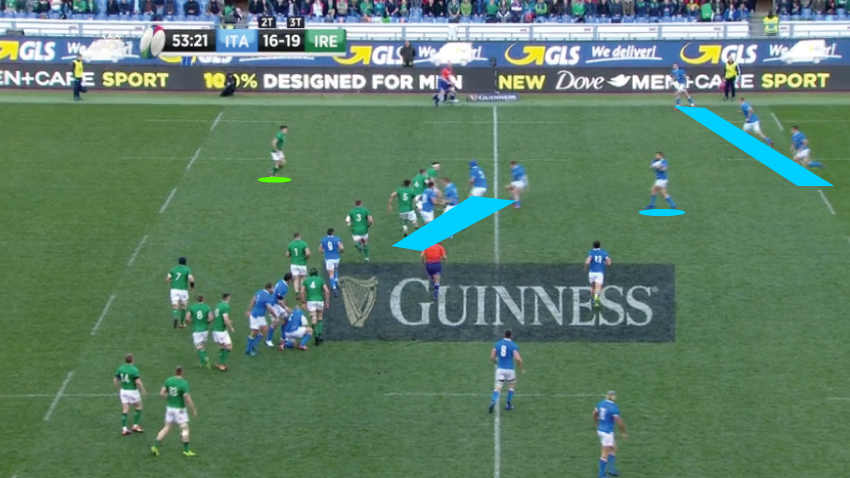 It’s quite a deep secondary line, relatively speaking. The idea seems to be that the cluster of Italian forwards scrags and blocks the edge of the Irish defence to create an overload situation on Stockdale and Murray covering in the backfield. 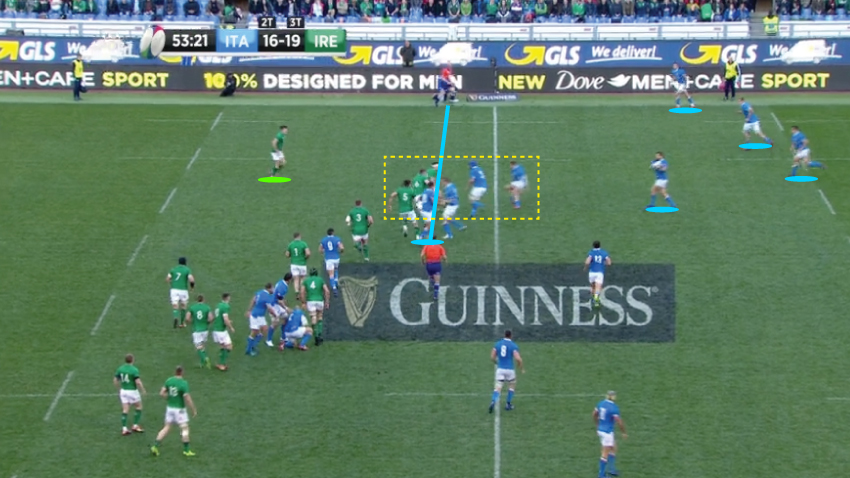 This will only work if the link player – Hayward – can successfully stick the edge defenders with his attack/pass line once he takes possession.

If he can do that correctly, the overload is absolutely on because Ireland have heavier forwards defending that edge space. 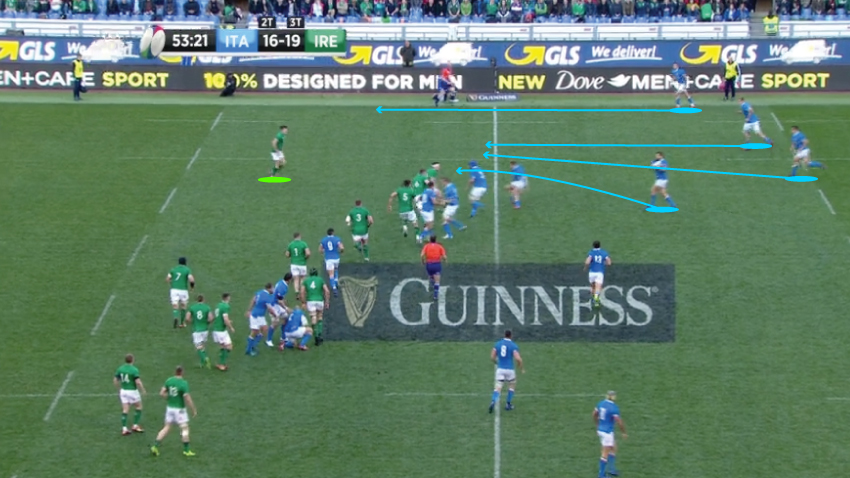 But Hayward plays a nothing pass to Luca Morisi without committing even one defender and, from there, Ireland can slide across to crowd the space and, barring a mistake, kill a direct try-scoring opportunity.

I want my link player attacking that edge to keep Scannell tied up at the edge, prevent Stockdale from drifting out and increase that space between Stockdale and Kearney coming up on the cover. All of a sudden, you’d have an attackable space between Stockdale, Scannell and Kearney that you could pin in place and attack the gaps. Incomplete link player play killed this move – a pretty common complaint.

Italy used the 1-3-3-1 variant – essentially two pods of three in the central spaces – against the bigger teams to help win the collision battle, something that they weren’t able to do consistently across a full 80 minutes against big sides.

They got good width on both of their Three Pod hit-ups with some nice fadeaway lines by Tuivati (Blue #6) and Ghiraldini (Blue #2) as they moved between the phases.

That concept of using quite a bit of depth behind a powerful screen of forwards (especially in edge spaces) if something that maximised Italy’s strengths, namely the group of big ball-carrying back five players they brought in over the last three years. The priority was loading central spaces with big ball carriers to try and make the most of their possession against bigger, better-conditioned Tier 1 teams but it never really paid off over the 80 minutes. They wanted the centre-field solidity and outside depth that two banks of three gave them against bigger teams but I felt they didn’t really have the conditioning for it.

Against the smaller sides, though, you got to see a little more of what I think Catt will bring to Ireland.

Even against the bigger sides – and especially when they had Jake Polledri available – you would occasionally see Italy switching to a 1-3-2-2. They would use this shape much more regularly against sides they expected to a bit of dominance over.

It allows for a more segmented set of heavy carriers in midfield, which in turn allows for more interplay between those forwards and the supporting backs. The risks of those Two Pods are that they are more vulnerable to losing collisions on the feet and getting stolen on the floor, but when they expect to win those collisions, it gives you a lot of variety. 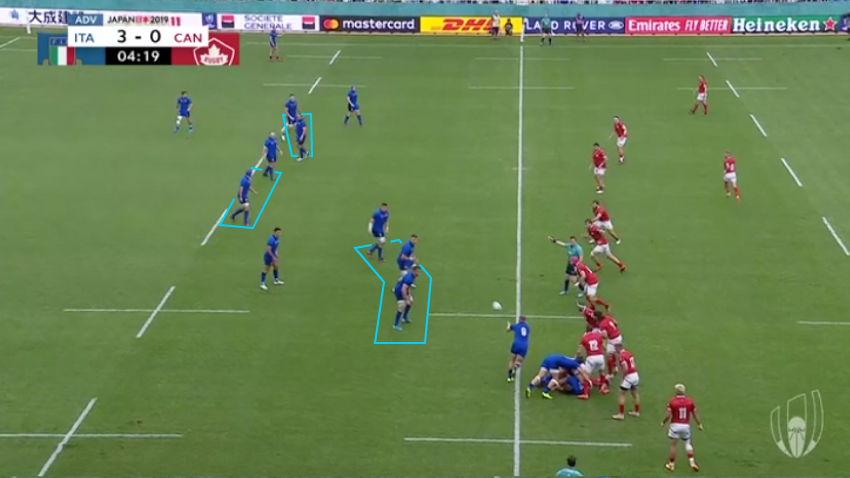 I think this kind of shape could really work for Ireland. When we look at how Italy attacked weaker nations with this shape we can get a real idea of how Ireland might look under Catt.

When Italy played weaker sides, they consistently used their big ball carriers to set a platform for the backs to slide around the corner on. Offloads were encouraged (if not always landed) and when Italy had their full complement of guys, they could (and often did) play what was on, even off 9.

When you look at the 1-3-2-2 shape, you can begin to see how Farrell might have been thinking for his first selection. Why include Doris from the start rather than off the bench?

Because we need a pacey, dynamic ball carrier to vary through the lines. In the below example, I’ve put Doris and Stander in the wider pod of Two, but they could swap between any of the positions here.

I would not be at all surprised to see Ryan and Henderson hitting off #10 more to use their pace and power to set the best kind of central platform with Furlong and Healy committing numbers close in. Van Der Flier, Herring, Henderson and Bundee Aki are the primary ruck support players in my opinion, but I think we’ll see Van Der Flier, in particular, taking up a wider, pacier carrying role to augment certain reverse plays off centre-field position.

If you go through the starting selection, we have loaded up with dynamic, hard running forwards. I have a bit of concern over our variety in the lineout from the start but Stander and Doris are very decent backrow jumpers. Doris, while untested at this level, has all the raw materials to really shine. I think he’ll be more suited to taking ball further out from the breakdown here and, if that sticks, he could have a massive game.

It’ll be really exciting to see how it goes.