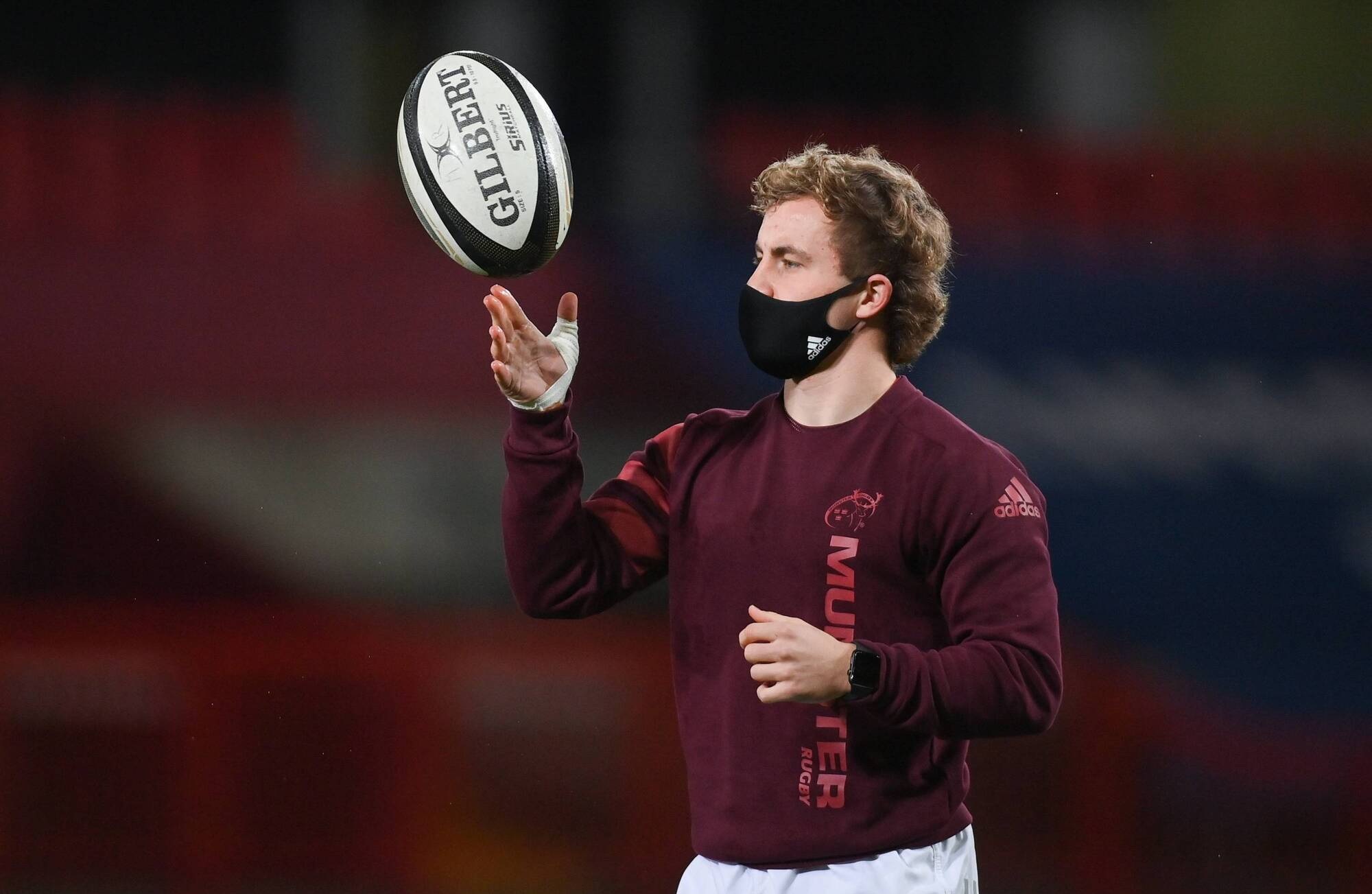 By Tom Savage5 min read
Munster are two bonus-point wins clear at the top of Conference B with five games left to play. Any flavour of win this weekend would move Munster to within a bonus-point win of securing a final with a few rounds yet to play. That’s the rough arithmetic of it anyway and, as ever, it can go up or down depending on results elsewhere. It’s like this, though; everyone else has to be perfect to catch us whereas we have the most cherished of all things in a log run-in – wiggle room.

Tight races can focus the mind, yes, but give me space to move any day of the week. Sure, wiggle room is only as good as your ability to use it productively but a test-window game against an Edinburgh side harder hit by the Six Nations than we are presents an opportunity to increase the pressure on our chasers.

When you’re in a tight race at the top of the log, your chasers put on the pressure on you with every win. When you have that precious, precious wiggle room you can go into games with a mindset of projecting that pressure downwards on those that would try to overtake you. With every game you take away from them, their window of opportunity gets narrower and narrower until it closes with the kind of slam that only cold hard maths can produce.

Even then, Edinburgh remain a team with good depth outside their test internationals. Sure, they are a less dangerous outfit without Duhan Van Der Merwe, Hamish Watson and Rory Sutherland but this would be true of any team. Even without most of their current starting Scottish internationals, they still have guys like Nick Haining, Viliame Mata, Pierre Schoeman, the exciting Boan Venter making his debut and underrated transition runners like Damian Hoyland and Eroni Sau available to them. Not all test window games are created equally and, in context, playing this Edinburgh side away during a Six Nations off-week deserves all the Category 1 strength you can muster.

With that in mind, Munster have selected accordingly. 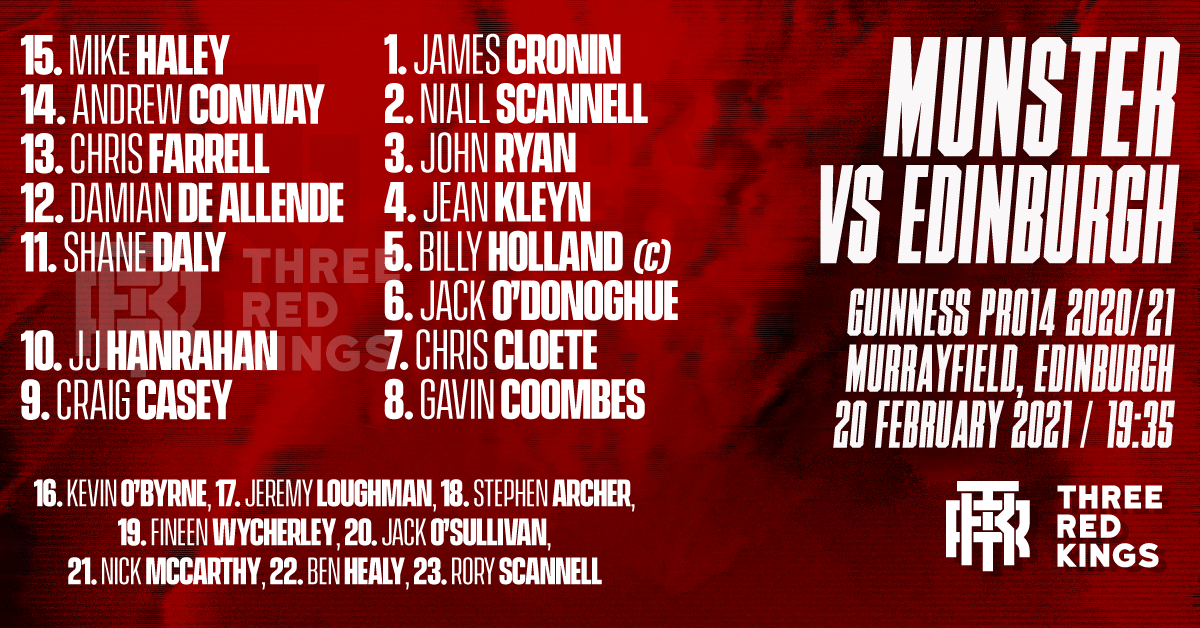 This has the feel of a game that’s going to be tighter than it might seem when taken at face value.

Munster have quite a strong side out when you consider how many guys in this matchday selection would start for us in a Champions Cup game but that shouldn’t be taken as an invitation to a walkover. Edinburgh have had some unbalanced results over the last few months but they’ve been badly affected by test callups and the unavailability of key players like Mata and others. A lot was made over their 40 point whooping in the RDS earlier in the season but that Edinburgh test window selection was quite a bit weaker than this one.

When you look at Edinburgh’s big defeats to Irish provinces in the last five PRO14 games, that has primarily been a function of conceding early and then losing control of the scoreboard before their lack of depth off the bench cost them down the stretch. When you look at their game against Ulster, for example, they were right in that game with 50 minutes on the clock but conceded four tries in the last 20 minutes.

Typically, playing Edinburgh at their strongest means dealing with the defensive range and coverage given to them by their standout wing-forward pairing of Jamie Ritchie and Hamish Watson.

In practicality, this means that both Ritchie and Watson cover a lot of defensive ground as they progress across the pitch with the flow of the attack’s possession.

Watch them here from the #MUNvEDI game earlier in the season. They work in a pair, tracking and stopping when needs be.

Right at the end when Munster played away from the space covered by Watson and Ritchie, a lane of playable space opens up for Scannell to kick through for what was almost a Jack O’Donoghue try.

If you look at this kick transition set you can see Watson and Ritchie covering the edges of the defensive line;

This is something that both players can do quite comfortably because they are athletic, rangy runners more than capable of cutting off a passing sequence in the wide channels by stepping deep into passing lanes but also with their lateral speed. That enhances their ability to cover across the field with the progression of the ball to handle opposition width.

The good news is; Watson and Ritchie aren’t selected here as both are with Scotland. Edinburgh have, instead, selected Nick Haining, Luke Crosbie and Viliame Mata in their back row which is a big, heavy-set selection of Power Forwards. Crosbie is vaguely similar to Ritchie in that he’s tall – 6’5″- but deceptively quick for that size but the quality of his coverage isn’t quite at the same level as Jamie Ritchie. Haining and Mata aren’t one-dimensional hitters but I would rate them as being more comfortable defending the heavier channels closer to the ruck as opposed to the edges of the primary defensive line.

That in itself opens up a bit of separation in the Edinburgh defensive set up. Look at how narrow Edinburgh’s forwards end up on this set of defensive phases against Ulster;

Ulster worked the ball through the middle of the centre of the field and, when the released the ball outside, they had a flow overload in the wide trams that ended in the opening try. Why is this important for Munster? We are starting Chris Farrell and Damian De Allende.

Munster can push away at the centre of the field to draw in Haining and Mata before looking to release out or find deep-stacked width off forward screens to pressurise the Edinburgh forward line.

We want to increase traffic for De Allende and Farrell onto Van Der Walt, Dean and Bennett outside the coverage of Crosbie, Haining and Mata. That opens up lanes for us on the outside and inside shoulders of our midfield hitters for late-arriving forwards or pocket runners like Conway. This concept also opens up huge opportunities for forcing massive opensides on maul breaks.

If we can pinch in the bulk of the Edinburgh pack in our maul drives, we can attack Crosbie’s lateral progression across the pitch by using Farrell and De Allende to compress the Edinburgh 10/12/13.

That last example; a staggered chop line from Farrell cutting off the first forward defender for De Allende to find Conway on an inside pocket route – a route where he’s tracking De Allende as if he was tied to his back pocket, essentially – has the potential to crack open this Edinburgh side if executed accurately.

This game will be tight but Munster have the ball carrying impact and wide-bore structure to consistently stress Edinburgh into linebreaks or collision point penalties (high tackles and ruck infringements). If we take those opportunities and build an early lead, there’s a healthy winning margin here for us.