Is it that long since the last Munster Wally Ratings of the 2017/2018 season?

It’s just about three months in actual time but it feels like an aeon has shifted in relative time. A season that ended in disappointment in Bordeaux and Dublin has morphed into a new campaign that seems to bristle with expectation, ambition and that most dangerous thing of all – hope. The areas that Munster needed to address – tight five and 10 – have been bolstered by the arrival of two genuinely international quality names in Tadhg Beirne and Joey Carbery, while Mike Haley and Arno Botha immediately add to Munster’s starting 23 in a palpable way. Bar the injury affected scrumhalf and openside positions, this is as strong a Munster squad as I can remember since the days of 2008 and, while that’s great, it brings with it the expectation to smash the glass ceiling that we’ve butted against for the last two years and win a trophy.

In a season with just two trophies to win, that’s easier said than done.

We’ll get an initial look at where we are this weekend against the Cheetahs in Round One of the PRO14. Nothing is won or lost at this stage in the season – just ask Glasgow – but the early structures we see this weekend will give us a glimpse of where we’re at after our first full preseason under Van Graan and Ferreira. When I say it’ll be worth watching after the two preseason games I saw this August, believe me.

Here are the teams; 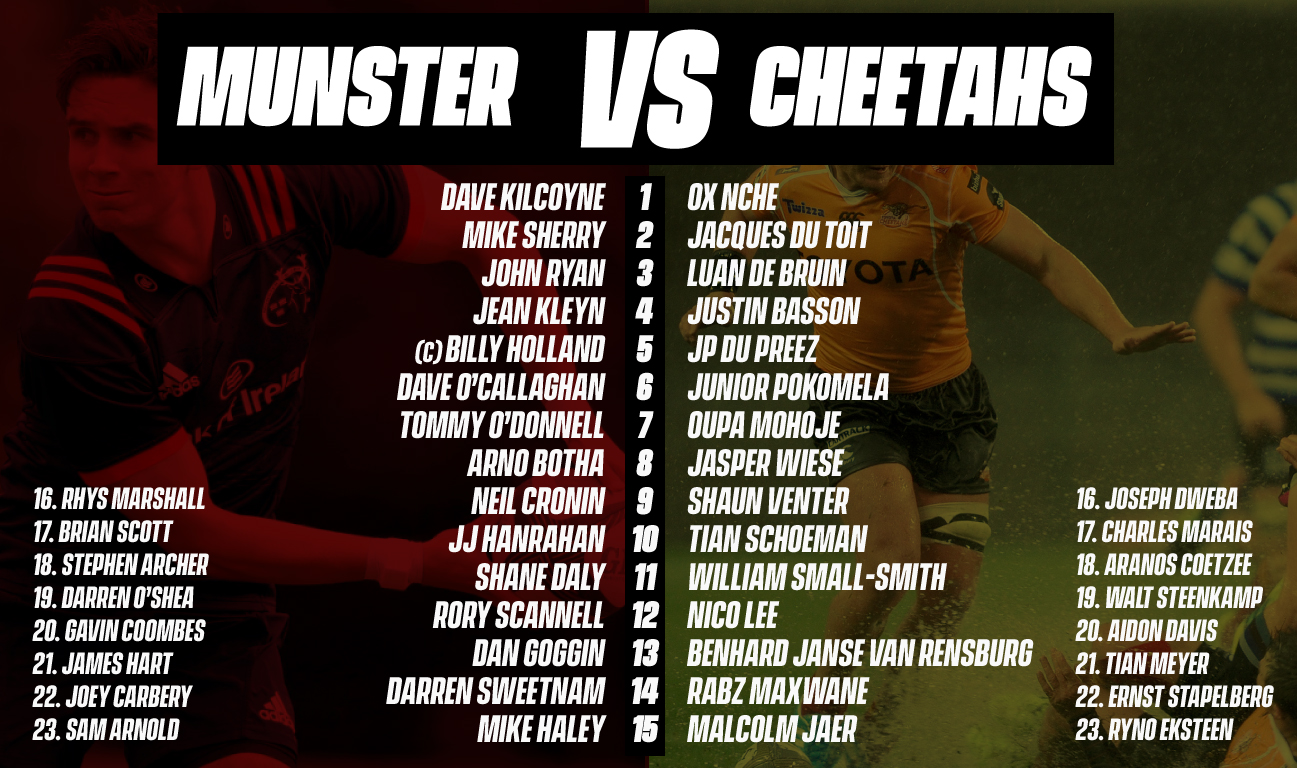 I’ll go over these teams in the Blood & Thunder Match Day Podcast.

A rating based on the two Currie Cup games I watched of the Cheetahs in the build up this game where most of their starting side for tomorrow’s game were playing.

The basic tenet of the Cheetahs game plan is running the ball. That’s trite analysis in one way – I mean, the clue is in the franchise name – but it really does define what the Cheetahs like to do when in possession of the ball. That seems to have been built upon during the preseason for the Cheetahs if their work in the Currie Cup is any indicator.

We should not pretend that this isn’t a much changed Cheetahs side than the one that surprised the PRO14 last season. They’ve lost a lot of quality in the offseason – Francois Venter, Uzair Cassiem, Johan Goosen and Clayton Blommetjies to name a few – and seem to be in a rebuilding phase. Tian Schoeman is an important signing for them, and I think he can be a solid option for them going forward. Their key guys this year are going to be Ox Nche, Malcolm Jaer, Oupa Mahoje, JP du Preez and Joseph Dweba, a powerful running hooker who’s on the bench for this one.

The Cheetahs shipped a bad loss to Western Province last week but the awful weather conditions make that game a tough one to appraise as it pertains to this weekend. For me, the most useful game was their 34-12 loss to the Blue Bulls the week before.

Let’s have a look.

The Cheetahs – a lot like Munster in some ways – do most of their best attacking work off first phase strike moves and in transition off the lineout, breakdown and kickaways. The Cheetahs are especially dangerous when attacking off stolen lineout ball, something they managed quite a bit against the Blue Bulls through the work of the 6’10” JP du Preez.

These two GIFs show everything about how the Cheetahs like to attack off transition lineout ball;

They aren’t afraid to get width on the ball, they have decent hands across the big openside and they can get the ball out of the tackle with regularity. This is a decent linebreak opportunity generated on the opposite side of the pitch of the transition, and this is a real illustration of what the Cheetahs want to do, especially off of your set piece.

The remedy to this is attacking Du Preez’s slow speed into the air by switching up the space he marks and the speed of the throw. His large wingspan makes any slow ball to the front or middle a live danger with this guy but if we can freeze him in the middle, we can attack the front or the back of the tail with decently paced throw.

Ball retention is massively important against the Cheetahs given how they like to play off scrappy transitions.

Look at their mentality off this knock on the turnover in midfield – the accuracy isn’t there but look at the speed of their reset to attacking position;

The Cheetahs aren’t a side that’s built to hammer hard over multiple phases very often in a game. They can find themselves overpowered when the game slows down to a one-out forward battle so surprise, pace and deception are their biggest weapons – where better to use that then off the lineout?

The Cheetahs have a tendency to swarm hit the 10 channel with a pod of one runner and two set cleaners on their ball off the top before coming back inside to hit the opposition forwards as they transition to a midfield defensive set.

The conditions made this tricky against Western Province last week but they’ll be going for it in Thomond Park this weekend.

When they maul, they like to build off Du Preez, who’s massive wingspan make him an excellent platform to construct a shape around.

The Cheetahs aren’t the most destructive from long range in the maul – Du Preez’s height and their relative lack of grunt around him work against them here – but they are tricky to deal with off the break.

Look at the pace of Schoeman’s pass to the midfield here and the willingness to kick deep into the backfield;

This kind of position – where the Cheetahs outside backs are running against opposition cover on the turn – is a key point that the Cheetahs will try to engineer in open play and off of the set piece. 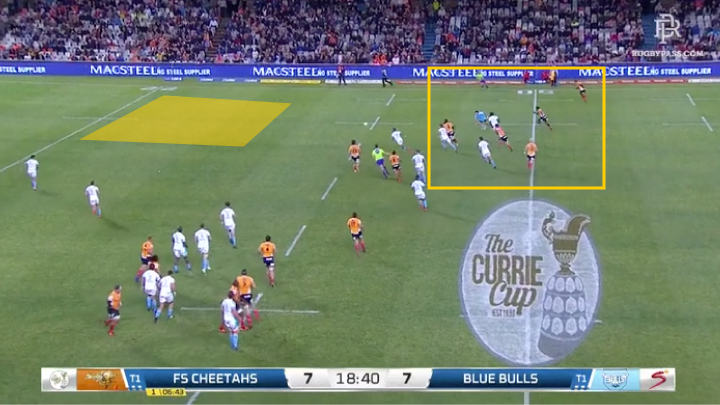 This quality is a key part of the Cheetahs attacking strategy and its why you’ll see them stand quite deep to the gainline on some of their attacking plays. They look to draw the opposition midfield and loose forwards into deep water so they can then play around them

Look at how they attack the disrupted space on the edge and the number of runners they get in support – dangerous. Dan Goggin and Darren Sweetnam will need to be very conservative on their press for this game. I’d be happy enough to give them the outside to make them take the space rather than give them an isolated player to pass around.

The Cheetahs are a decent side but they have a few defensive issues that have presented themselves again and again over the last two Currie Cup games.

This kind of isolated blitz is a common enough tactic from Benhard Janse van Rensburg;

Why do this? They want to corral the opposition into narrow attacks that don’t stress the cardio of their tight five. Pay close attention to Du Preez (tall guy, scrumcap) in the above GIF and how slow he transitions across in the C position.

When you see the outside centre blitzing hard in this circumstance, it’s to cut off the openside so they don’t get caught in the space outside Du Preez. 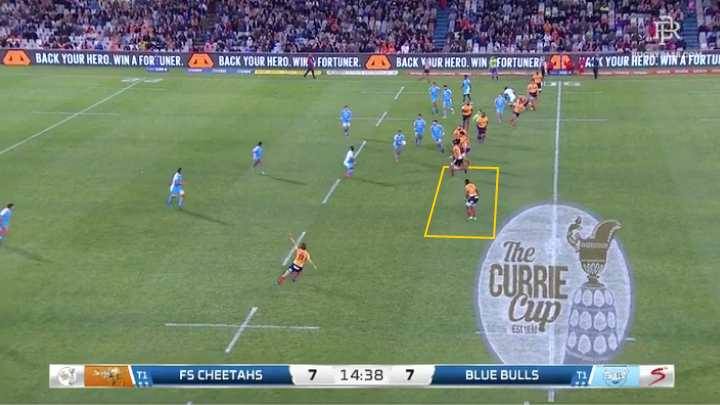 This kind of blitzing happens a lot for the Cheetahs, and it leaves gaps to play around right on the gain line especially when their C defender shoots right out onto the ball carrier ahead of his support.

A tip on pass, or a switch loop could be just the job against the Cheetahs if they defend like this on Saturday night.

This also manifests itself in some pretty ordinary ruck defence, which I’d expect Neil Cronin and others to have a regular pop off. Look at the spacing on these defensive sets; 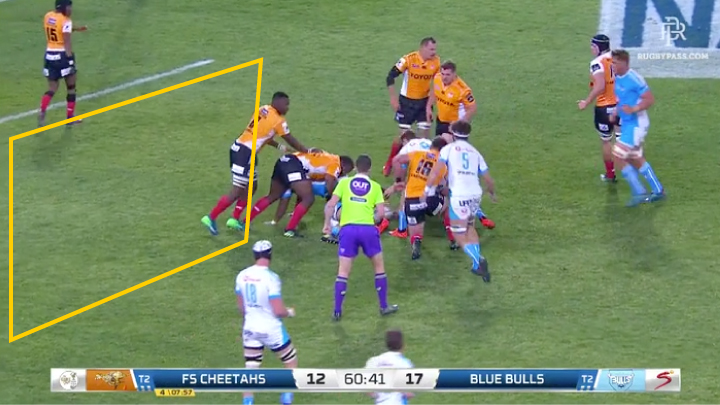 The Cheetahs have a tendency to cluster on breakdowns that come in the aftermath of a linebreak and that can be exploited with clever runners and breaks from halfbacks.

If Munster play to their potential, they will win this game but they can’t do that slinging the ball around, at least initially.

The Cheetahs can be broken by pinning them to one side of the field and then attacking the other side with width and intelligence, especially if we can beat their blitz to the edge.

We’ll have plenty of scope to attack them around the ruck, too, especially as they reset off a few left/right phases. We’ll need pace and incision from first receiver too and with Hanrahan and Carbery, I think we’ll get it. If we can disrupt their work at C, there will be chances up the middle of the pitch.

Our scrum and lineout will need to be sharper than they have been in preseason to date and in this regard, this is quite a big game for Mike Sherry. If we are solid here, the win should come relatively easily but Du Perez’s wingspan and size will be a real problem for our lineout if left to his own devices. That will be the objective for Holland to crack.

Either way, it’s it’s good to be back.