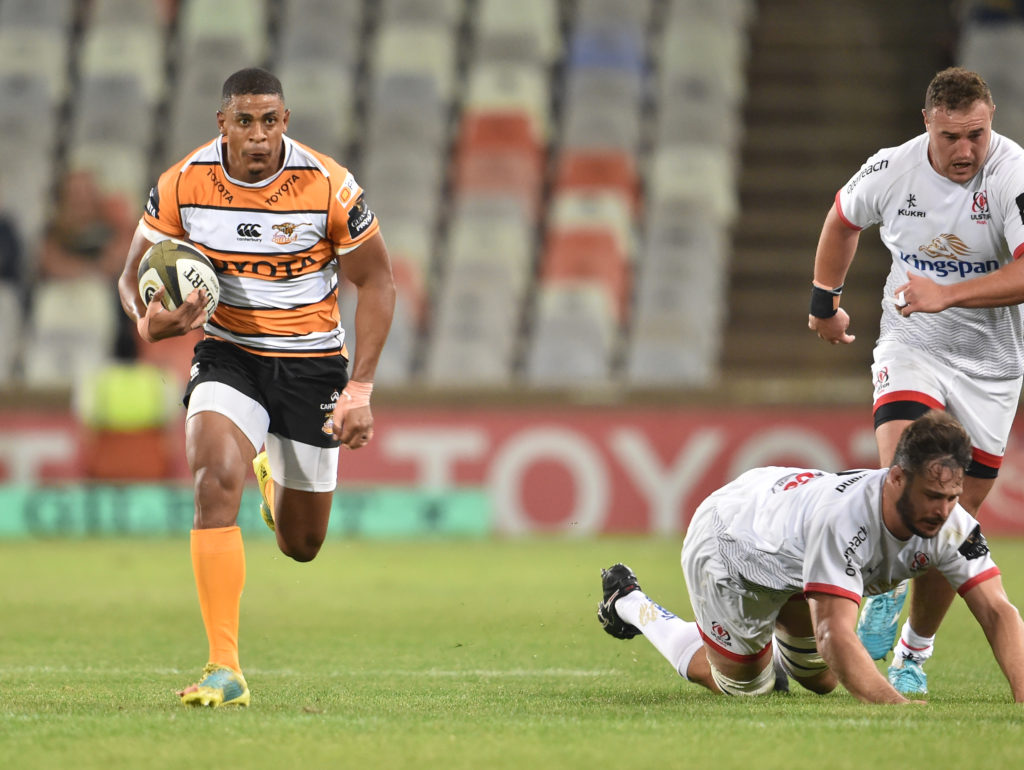 Is there a more difficult game than the Cheetahs in Bloemfontein in the PRO14 right now?

Leinster are always tough in the RDS, sure, but they’ve almost an entire squad away at the World Cup at the moment. The Cheetahs, on the other hand, have just one player missing because of the World Cup and the guys that were left behind have a Currie Cup winners’ medal in their back pocket, sit on top of Conference A and have scored 111 points and 16 tries in two games in their last two games in the Toyota Stadium. And all while playing expansive, high paced rugby that has left both Glasgow and Ulster grabbing for fresh air both literally and figuratively.

This will be the biggest test of Munster’s season to date from both an opposition and environmental perspective, once you bring altitude into the equation. Munster have selected a XV that reflects the scale of that challenge and it’ll be interesting to see how Munster’s new attacking style stacks up against the width and tempo of the Cheetahs.

Let’s get to the teams.

I’ve had a look at the Cheetahs’ two previous home games against Glasgow and Ulster and two aspects of the opposition’s performance in both games stuck out to me.

Both had almost zero control from #10 with regards to kicking the ball in either game and both Glasgow and Ulster had a nightmare at the lineout. That might go some way to illustrate why Munster picked the players we did at 10 and 12 for this one – experienced left-footed and right-footed kickers that can operate on both sides of the ruck – and why we went with our most experienced and, for my money, best lineout caller in Billy Holland, from the start.

If Munster can nail our exits and take advantage of the lineout opportunities we’ll get from the Cheetahs’ exits, we’ll be on the road to getting a result here.

The biggest aspect of the Cheetahs is their attack and if you watched their performances against Ulster/Glasgow you couldn’t help but be impressed by the ambition of it. The Cheetahs play with a lot of width, a lot of tempo and a lot of hands through the ball wherever possible. Sure, they’re dangerous on kick transition, but that’s been true for the last three seasons and hasn’t changed. Don’t kick loosely to the Cheetahs in Bloemfontein is such a truism it’s barely worth saying.

The interesting thing is their recent behaviour on their phase play.

Here’s an average of their ruck decisions over the last two games in the four quarters of the pitch.

If you noticed the Cheetahs looking for a lot of width in Q2 and Q3, you weren’t imagining things. The Cheetahs passed to #10 and beyond 43 times from Q2 and Q3 in the last two games and scored four tries off the back of linebreaks generated from those ruck decisions.

Everything that the Cheetahs do in a game, from their selection to their work off the set-piece, has its roots in these decisions in Q2 and Q3 and, if anything, I would expect them to double down on their expansive work in Q2/Q3 in this fixture.

Why? Look at their midfield trio – Janse Van Rensburg at #13, Fouche at #12 and Schoeman at #10. Swanepoel started the last two games #12 for the Cheetahs and played more of a “hitter” role, especially against Ulster before he went off injured on 30 minutes. Fouche, his replacement, played a similar role but, to my eyes, less effectively as he’s not a natural carrier of the ball. Janse Van Rensburg acted as a second passing option against Ulster – quite successfully – but Fouche could play the same role with his skillset.

Ultimately, all of the Cheetahs dangerous runners are better taking the ball in the RUN ZONE. Their back three, obviously, are really dangerous in that part of the field, Smith and Volmink in particular but their backrow and front row are equally dangerous there; Nche, Dwebe, Polomela, Weise and Venter are all exceptionally talented carriers of the ball with any kind of space to work with. They can offload, pass under pressure and have surprising pace and acceleration.

When you take that fact – and it is a fact – and combine it with the Q2 and Q3 ruck decision numbers off 10, you have an idea of where the Cheetahs want to play, and how they intend to get there.

Let’s have a look at a common starter play for the Cheetahs off a lineout.

Small-Smith gets bundled into touch on this one but you get an excellent idea of how the Cheetahs want to play off the lineout here. There are two “pinch runners” – two forwards – running decoy lines to allow the midfield to play across the pitch and stress Ulster’s defensive reset.

The Cheetahs would then go to work on their most dangerous play structure – big openside attacking sequences. Here’s one from a similar position to above, but this time it’s against Glasgow.

Look at the play characteristics; a wide pass to a two-man forward pod who swing the ball back on a screen to Schoeman, he goes wide to Fouche, and he feeds Janse Van Rensburg. Their two lock forwards selected for here – Steenkamp and Manjezi – are incredibly comfortable on the ball and have no issues passing back on the screen and should be expected to do that in Q2 and Q3 more often than not, given ruck decision numbers we’ve seen from the Cheetahs to date.

One thing I felt Ulster failed to do was attack the Cheetahs ball transfer as they went across the pitch. Look at how comfortable Ox Nche is in possession here.

If I’m the Ulster defence coach, I’d want to know why Treadwell isn’t pressurising this crucial part of the Cheetahs attacking transfer instead of bumping into him after the ball is gone. Either hit him, or drift with the ball. Munster will have to ensure we attack the Cheetahs attempts to go wide, given we know thats where they want to go but we’ll have to make sure that we have good defensive alignments and pace in our back five and midfield to cover the lateral space with the aggressive line speed we’ll need to pressure their passing lanes.

Timing our forward movements when the ball is in the air will be crucial. The Cheetahs – Pienaar and Schoeman in particular – get a lot of air on their big openside passes and it’s the slowest part of their attack.

Ideally, we want to use the Cheetahs lack of centre-field power carriers and their need to get the ball wide to the edges to work to our advantage from a defensive POV.

The Cheetahs need a lot of depth from the gain line to stack their ball carriers in dangerous positions. So when the ball is in the air from Pienaar and Schoeman on their way across the pitch in Q2, we need to push up hard into their passing lanes. 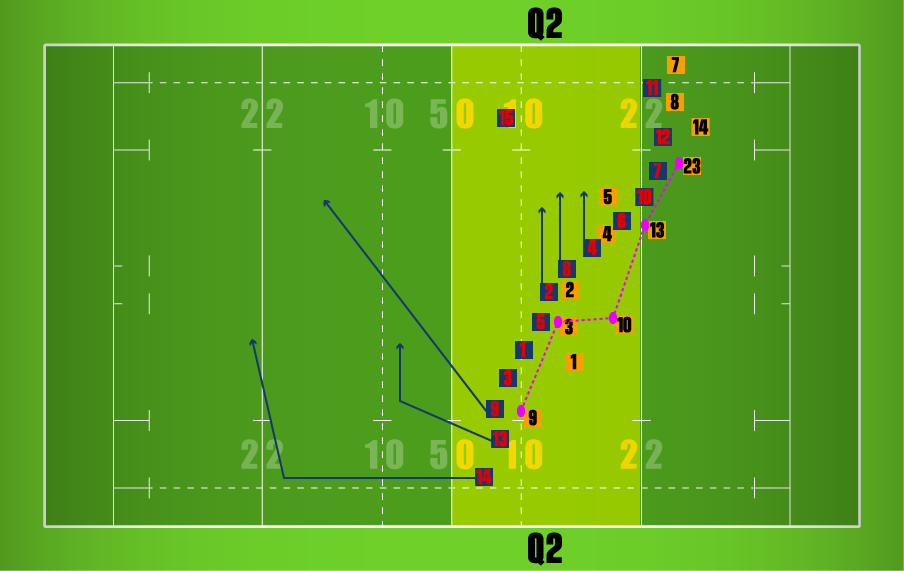 I’ve given us an ideal alignment here – as opposed to the next example – but this is a good illustration of what I mean. We must avoid the Cheetahs rucks, fill the field on openside plays and advance into the Cheetahs passing lanes whenever their forward pods take the ball. Our inside defenders – in this example, Holland, Loughman and Archer – have to cover the ball carrier and the tip on pass, Marshall (Navy #2) has to advance onto the outside carrier in that three man pod while taking care not to get scragged. He’s also covering the break from Schoeman. Botha and Wycherley have to advance hard into Schoeman’s passing lane to pressure his pass across the pitch and then follow the ball across to mop up any breaks.

If we can’t stop Schoeman passing, Bleyendaal, O’Donnell and O’Donoghue have to spike into the wide pod to catch them on receipt of the ball while also watching Janse Van Rensburg on the break.

The role of Daly and Haley will be vital here. 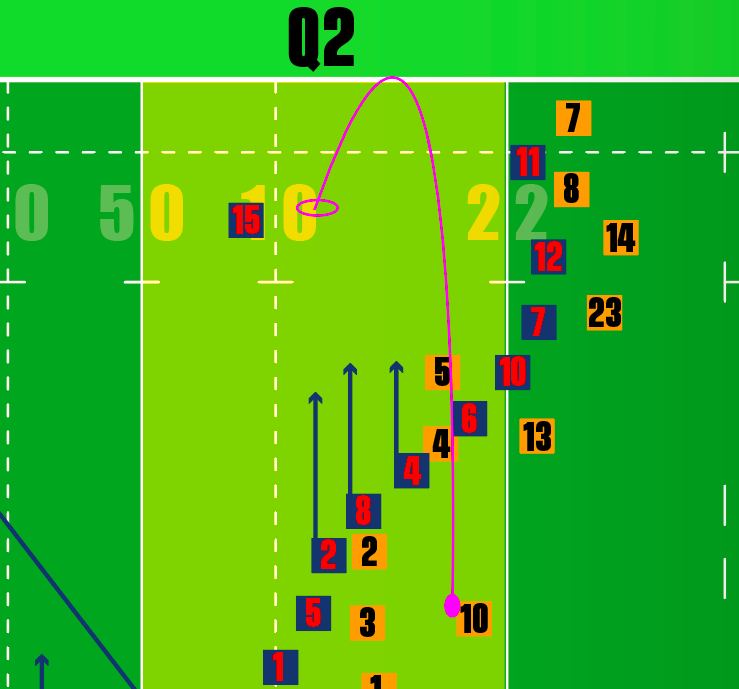 Daly will have to watch angled kicks from Orange #13 and Orange #23 (who’ll be #12 on the day) if they get cut off by our line speed. Haley will also have to aggressively cover the backfield behind the primary defensive line to dissuade Schoeman or others from targeting the space with a crossfield kick.

When you don’t take the Cheetahs space and trust your inside defenders on Big Openside Plays, disaster awaits.

Here, the Cheetahs use their forwards to spread the ball wide and deep to generate attacking options in edge spaces. Look at the width of the initial pass and the depth of the runners in the second layer.

They want to drag Ulster out of the line and then play around the corners that come when Ulster don’t commit to their blitz. Ideally, given that we know where and how the Cheetahs want to play, we want to have an aggressive blitz on defensive phases like this, as shown above. 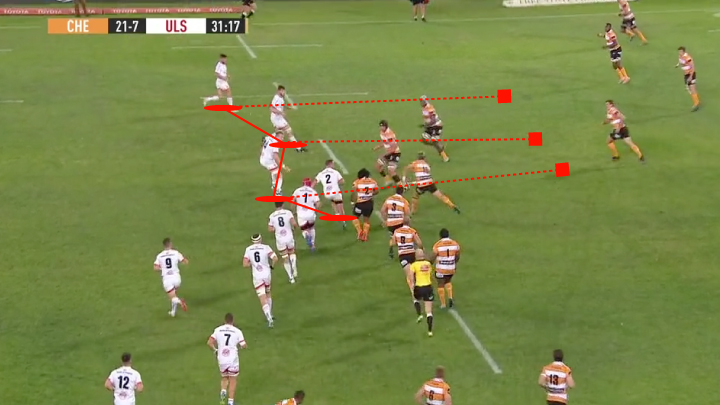 You can’t allow the Cheetahs to have this kind of width and depth. Pienaar’s long base from the ruck chopped a lot of Ulster’s forward defenders out of the picture and the Cheetahs are well stocked on their midfield forward pod to chop out the remaining Ulster forwards tracking across. 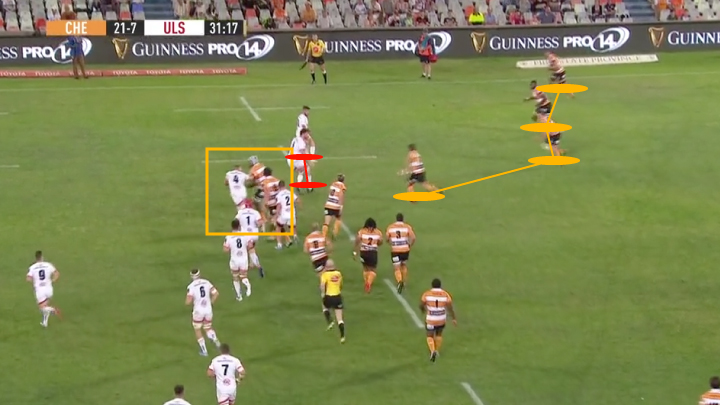 The screen players take out White #4 and White #2 to leave Fouche running onto White #5 in space. The results are predictable. This linebreak earned the Cheetahs the field position that would lead to their bonus point try a few minutes later.

How did White #2, White #4 and White #5 end up defending the edge space with the backrow and midfield on the other side of the pitch?

They lost a lineout three phases prior.

The Cheetahs are excellent at maintaining your bad transition alignments across three or four phases because of the width they like to use. Essentially, they don’t give you a lot of centre-field rucks that you can slow ball and reset your edge defence with.

Munster will have to ensure we kick into the stands, pressure the Cheetahs lineout – which we can get at – and ensure we don’t cough up too many lineout turnovers of our own. If we can cut off their passing lanes on Big Openside Plays, we can force them to hand us multiple kick transition opportunities.