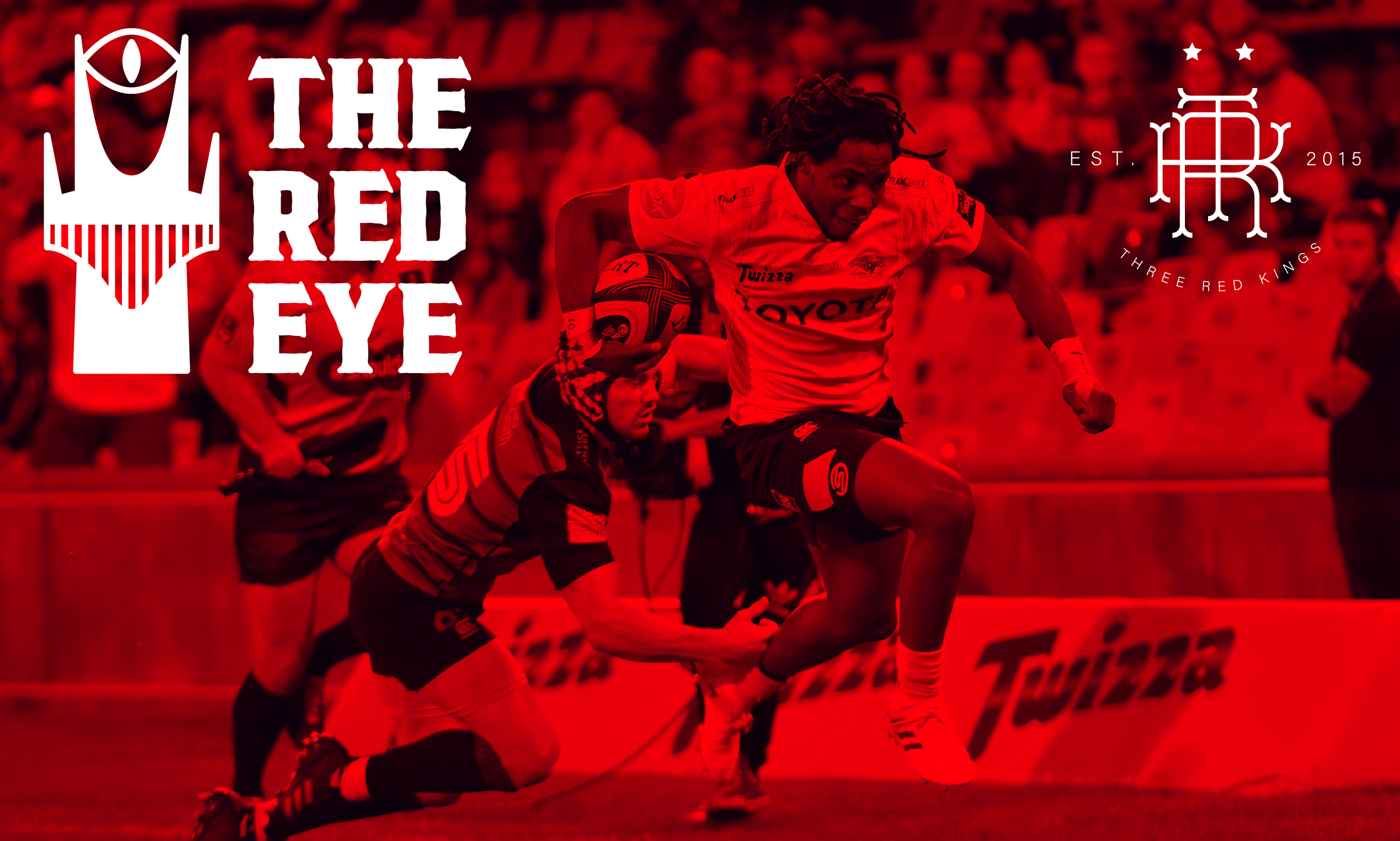 Playing the Toyota Cheetahs in the Free State Stadium in Bloemfontein is a unique challenge.

It’s not an impossible challenge by any means but as physical examinations go, they don’t get much tougher than the rarified air of the Highveld. When you’re playing 1,395m above sea level, the ball bounces higher, travels further and that’s before we get to the physiological effects of reduced oxygen; headaches, dizziness and a feeling of sudden tiredness that can bring “the wall” closer than you ever imagined.

That is what awaits Munster in Round 20 of the PRO14, with a chance to wrap up a home quarter-final with a game to spare as the reward.

The Cheetahs have been a tough crew to crack at home this season. They have only one loss on the books in 9 games at the Free State Stadium and that was a narrow 26-29 slide to Conference A leaders Glasgow all the way back in Round 6.

It’s been all “W” since then but that defeat, like their wins, has a common thread through it – a lot of points conceded by the Cheetahs.

So the Cheetahs tend to concede a lot of points but that hasn’t translated into the kind of losses you’d expect.

Like I said, this will be a unique challenge.

When you play at altitude your body reacts differently.

Teams tend to notice a bit of a lung burn after the first 10 minutes that they wouldn’t normally experience until way later in the game. The Cheetahs are excellent at causing that burn and exploiting it with their style of play which places a priority on keeping a high attacking tempo and denying the opposition a chance to reset defensively.

Both these examples illustrate the key principle of the Cheetah’s attacking style once they get field position – high-intensity narrow carries with a premium on moving the ball in the tackle and preventing the opposition from planting pillars and forcing the Cheetahs into slower attacking scenarios where they are less effective.

When the Cheetahs get high tempo attacking ball they can be incredibly dangerous, especially with dangerous heavy runners like Ox Nche, Oupa Mohoje, and Uzair Cassiem well able to carry in the wider channels with serious pace – and usually for big gains. The above passages of play are incredibly hard to defend against because the Cheetahs are dictating the tempo of the engagement and when they get the opportunity to play this way, they tend to score tries.

How do the Cheetahs construct these opportunities?

In general, the Cheetahs only play with the kind of high intensity offloading you see above when the situation allows it. They’re excellent at generating these scenarios off lineout possession (and I’ll get to that) but they generate field position through play patterns like the below. 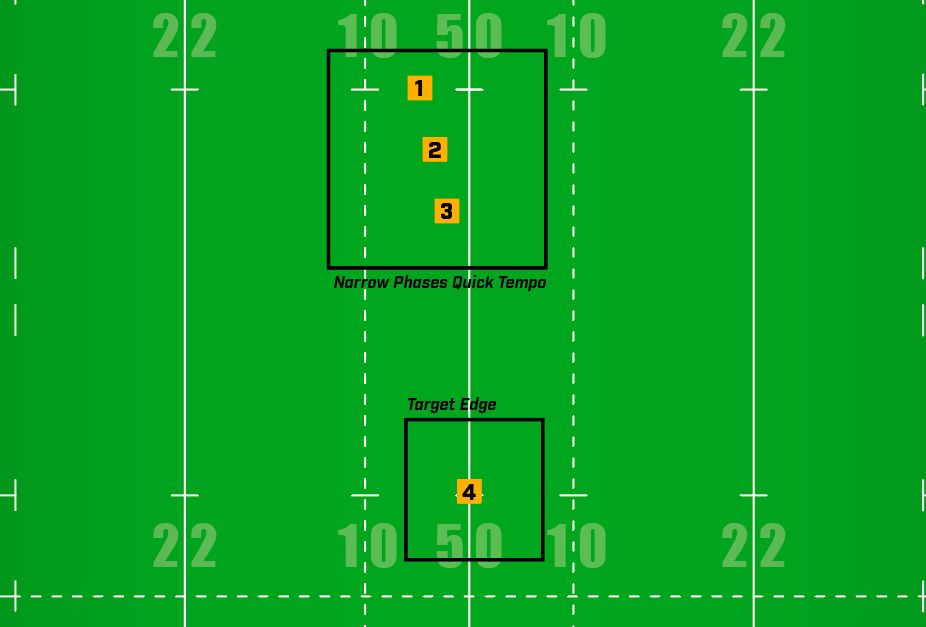 They will work the ball in narrow phases (1,2,3) to generate pace on the carry or until they feel they’ve generated workable space on the edge for their backline to surge into (4). They are fairly strict on this kind of phase play and don’t really separate into set positional pods (a 2-4-2 or 1-3-3-1) unless they’re in the direct aftermath of a scrum or lineout.

A lot of the time, the Cheetahs phase play between the 22s will look like this;

The forwards will cluster together to work the ball in narrow phases until a carry to the midfield exposes an overlap or even numbers situation in space. Once the Cheetahs get that space they’ll go wide quickly and have a good range of wide passing amongst their backs to make sure they get their lightning-fast back three into one on ones with the outside centre or covering wingers.

They want to narrow you with heavy phases and then hit wide-wide. Once they get a linebreak, they’ll tend to use their forwards to pop high intensity carries (again, with a narrow focus) but add in offloads and passes from the tackle once they have dynamic possession to work with.

In general, you won’t see the Cheetahs forwards spreading passes between each other over long distances in midfield, and their general attacking shape reflects this.

What they don’t want is the game to slow down into tight one on one forward carries because, as you’ll see from the above examples, they tend to lose a concerning amount of those. If they lose enough of them in a sequence, they’ll kick the ball away but expose themselves to kick transitions on the opposite side of the field given their propensity to use their forwards in narrow clusters.

When they move the ball near the 22, they’ll use the same narrow patterns to retain possession and generate space for their pacey backs to exploit.

Even on this play, you can see the rough pattern taking shape. 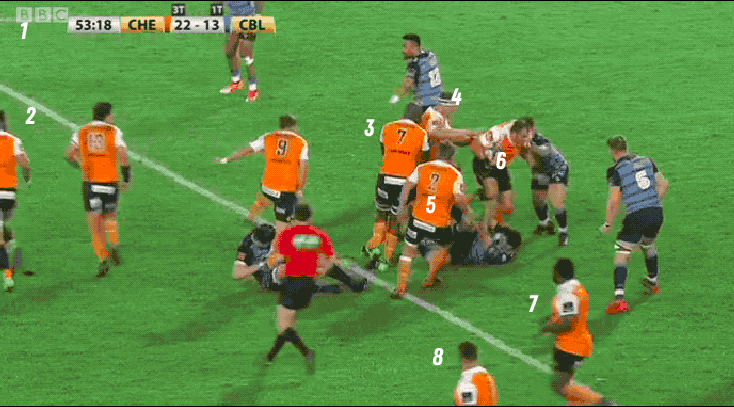 All of the forwards are in a narrow 15m box, with two moving off to provide a right-hand side carrying option. They’ll mix this pattern up with a wider pass to a back three player if they spot a mismatch but in general, the Cheetahs will use this style until they can generate a favourable ruck, broken tackle or tight offload. Once they get behind you, they’re lethal.

It’ll be vital for Munster to nail their tackles – obviously – but they’ll need to add value to the tackle by slowing down the recycle and forcing the Cheetahs to burn 5/6 tight phases before either going for a high percentage wide pass or kicking away. Slowing down their phase speed will be more important than usual here because of the incremental damage of altitude to your cardio. We want slow defensive sets with slow ruck recycle speeds to tempt the Cheetahs into offensive penalties but, more importantly, to ensure we don’t get run off our feet early.

The Cheetahs have a decent scrum on both sides of the put in, but I think they’ll be in for a hot time with our starting front five. We won’t have Kleyn’s power on the tighthead side but I think Munster should have enough to have a decent early advantage in this one, but we’ll see how it does as the game wears on.

The Cheetah lineout is vulnerable to Peter O’Mahony. You could say that about every lineout in the world and it’d be true but the Cheetahs are particularly vulnerable.

From what I’ve seen of their hooker and starting pack, I’d be comfortable in saying that they have a fairly basic call setup without much movement through the line. Their primary jumpers aren’t the quickest into the air and that’s in part due to some iffy lifting, especially in the front half of the lineout.

That’s a recipe for a few Peter O’Mahony specials at the front of the lineout and I really think that van Jaarsveld can be rattled here. If we can narrow the Cheetah’s lineout ambition to the point where they’re either chucking the ball over the top or planting guys at the front to deal with O’Mahony, we’ll be a long way to getting a win here.

The Cheetahs maul is pretty good but it’s mostly used as a feint for wider plays to generate the kind of high tempo ball they excel at.

You’ll see them try plays like this initially – especially when you see Cassiem lining up at the front of the lineout – but you’ll have spotted the speed of Cassiem’s jump at the front as something O’Mahony or O’Donoghue might possibly interfere with.

The Cheetahs use a fair amount of maul feints, in part because of their general weakness in the maul. They don’t have a bad maul – it just isn’t a massive strength of theirs most of the time. As I’ve mentioned before, the slower you are in the air, the harder it is to maul effectively unless you can disguise the point of landing. The Cheetahs don’t really use an awful lot of lineout movement prior to the throw so that can mean that they get stuffed in the maul more often than you’d expect for a South African side.

In attack, I think Munster can have a real cut off the Cheetahs if we can land out of the range of their two starting locks who are pretty good defensive maulers.

Where can Munster attack the Cheetahs?

The scrum and maul is a good place to start but you can also catch the Cheetahs on multiphase sets with their defensive alignment. This isn’t a cardio issue, like the Kings, it’s their overeagerness to win collisions early that costs them linebreaks.

Man for man, the Cheetahs aren’t your typical South African pack. They’re not soft by any means but they tend to blitz a little harder than a side that’s more secure in their one on one physicality.

Look at how they get caught at the edge here;

Mahoje, Hugo and Cassiem get disconnected on a fairly simple defensive blitz and give up a huge linebreak that forces Blommetjies to cough up a yellow card.

You can see Hugo get disconnected again on this phase;

Hugo’s “C” line is badly disconnected from those inside him and that leaves a massive gap up the side of the ruck that you could easily see the likes of Hanrahan and Hart combining to unlock.

They also tend to narrow defensively in the aftermath of a kick transition;

So the kind of pullback passing I highlighted yesterday on big openside plays directly after a kick return could show up huge here.

They aren’t the biggest from 1-5 and they aren’t the quickest in the back row. That forces the Cheetahs to give up space further out if you take them through a few tight phases and that can leave Venter and Niel Marais with a lot of space to defend.

What’s the best way to attack the Cheetahs?

Remember this article? It’ll be vital in this game.

The Cheetahs have a defensive hitch in their midfield lineout defence. It slopes. 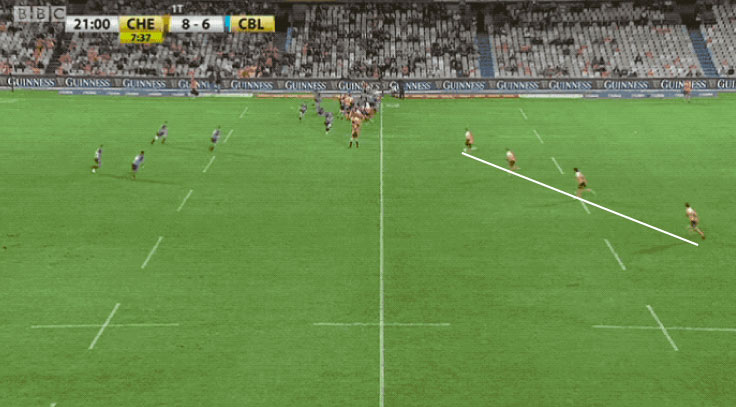 Is this a defensive style choice?

It’s possible they’re trying a soft drift (up and out) but this style gave up so many line breaks and missed tackles that it had to be a failure of some kind. They gave up a tonne of diagonal space to the Blues on multiple occasions and this has been present in a lot of their games this season. Just like on phase play, they get disconnected way too easily in these scenarios.

With a bit of ingenuity and pace from first receiver – Hanrahan’s speciality – Munster could find great success in attacking this diagonal space, especially with a clean supply of ball off the back of the lineout. There are clean breaks to be had if we can get Goggin, Arnold and Conway into these kinds of scenarios and if Cheetahs don’t start out with this sloped defence, they’ll fall into it sooner rather than later.

It’ll be tough, for sure, but the Cheetahs give up enough points and defensive chinks that a win is more than possible if we can dictate the pace of the game, keep our accuracy with ball in hand and keep our discipline.