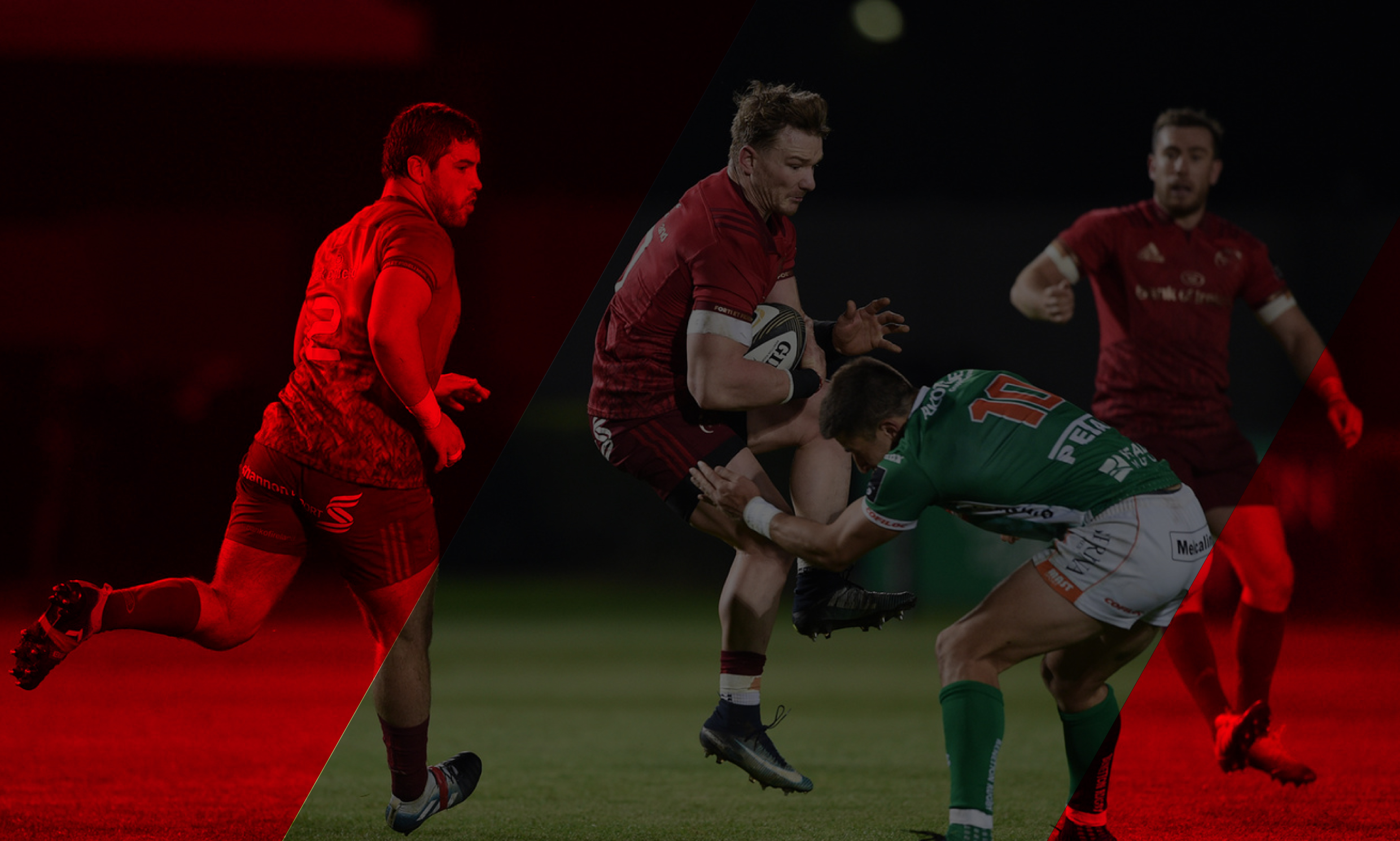 We’ve been here before.

Quarter-finals in knock out rugby? Obviously. Playing at home against that season’s Conference B surprise package? Uh… yeah, that’s a bit weird actually. Playing a full strength Benetton side a few weeks after playing them in Treviso? OK – now it’s proper spooky.

However, it would be a mistake to assume that familiarity will lead to a predicted result. Make no mistake, Benetton have a game that can hurt this Munster side in Thomond Park this weekend. I don’t expect Benetton to win here, don’t get me wrong, but I thought the same last year against Edinburgh and that one went right down to the wire and the same thing can happen here.

It has to be said, though, as quarter-finals go, this is a handy one for Munster Rugby, let’s be clear about that but with that comes a massive pressure differential. Benetton are in dreamland already – Champions Cup qualification secured and the first Italian side to make the playoffs – so even training in May is a bonus to these guys. They will rock up to Thomond Park with nothing at all to lose and, despite a heavily rotated Munster side getting a bonus point win in Treviso a few weeks back, Benetton will have little or no fear of this coming weekend. Why would they? No one expected them to be here so what is there to worry about?

But when we look at Benetton, I think we’re seeing a team that have excelled in punishing teams for weakened selections and then beating everyone that they might have expected to beat at the start of the season.

All of their statement draws away from home this season – Leinster, Ulster – were against weakened selections and their four away wins came against Zebre, the Southern Kings and the Dragons. That doesn’t sound that impressive but what if I told you that was the fourth best away record in the combined conferences? Those two away draws did them the world of good in the hunt for the third spot especially when they had an 11 game away schedule this season. They only lost three times at home all season – all to Irish provinces – and defeated everyone else that came to Treviso.

Benetton have no statement victories over full-strength opponents in the PRO14 this season so let’s hope they don’t start this weekend. 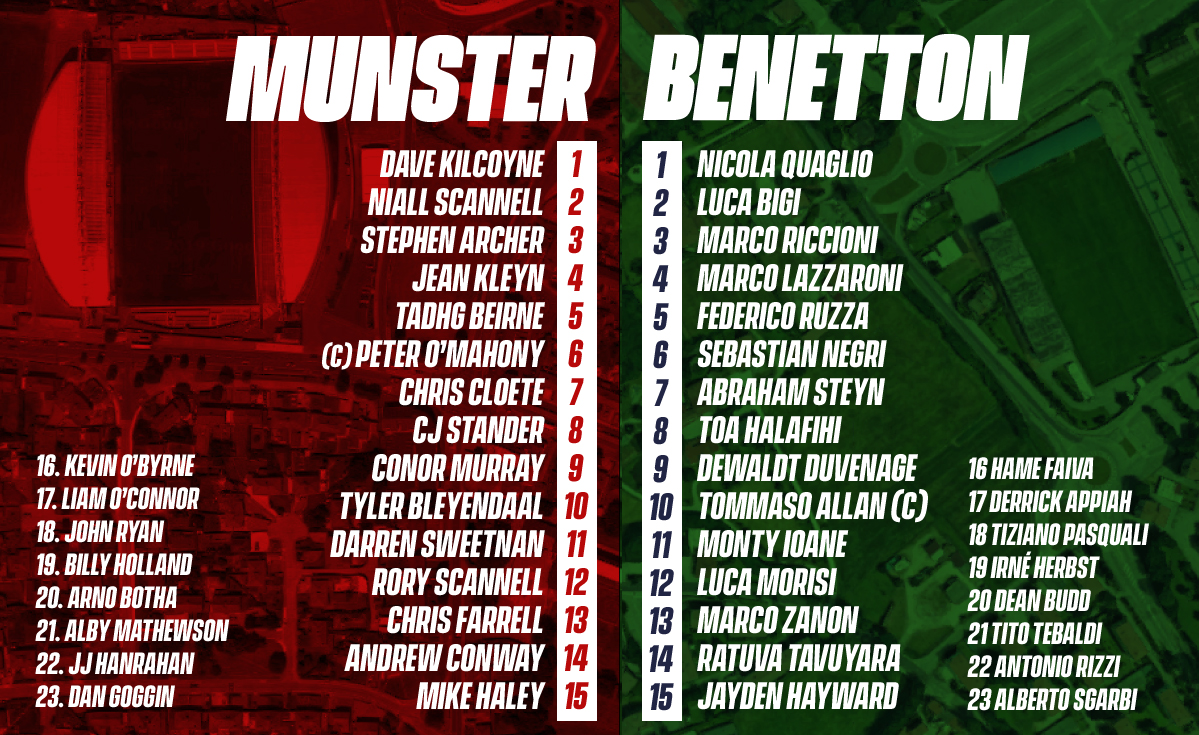 I’ve decided to change this up slightly. I’ll be assessing specific facets of the opposition’s set piece, defensive structure and other stuff in the Blood & Thunder Podcast – and here – so here I thought it would be cool to show where I rate the opposition (and Munster) as a whole in a European context as first choice units and then, depending on the how far away both Munster and the opposition are from what I would consider “full strength”, how the teams actually taking the field rate against each other.

It isn’t very often in the modern game that you get to take a direct, full strength measure of an opponent a few weeks before playing them in a knockout game. Teams who find themselves in those situations usually like to keep their cards close to their chest – see Saracens vs Exeter in the Gallagher Premiership this weekend, for example – because you don’t want to give the opposition video analysts a direct point of reference to how you play.

It’s one thing to watch a team play at full-strength against someone else, it’s another thing to have direct metrics for how they play against you with only a few weeks of a difference between games. Munster won quite well in Treviso a few weeks back with a heavily rotated side taking out Benetton at virtually full-strength bar a few lads dropping out last minute.

From a Munster POV, we have to examine how we conceded the points we did in this game and look at how we can possibly prevent that here. From an attacking perspective, most of what I spoke about here still applies.

There are two main times that Benetton pressure hurt us in that game, so let’s have a look at how they managed it.

First things first, Benetton did an excellent job of managing where the game was played. I wrote in the Red Eye from a few weeks back that Benetton would want to avoid kicking to touch all that often.

Benetton – and Tomasso Allan in particular – will try to keep the ball infield when they kick unless they can try to get one of Tavuyara or Ioane running onto a shallow, angled kick from the flanks.

Benetton want transition events so you’ll often see Hayward or Allan booting the ball down the middle of the field to invite a kickback – where they’ll attack through Hayward, Allan, Tavuyara and Ioane with the latter two players in particular well capable of flinging an offload to a support runner. Ioane and Tavuyara have 29 and 27 offloads between them this season, so I’d expect the same to continue here.

This held out to be mostly true.

Munster had seven lineouts all game – mostly from penalty advantage – compared to Benetton’s fifteen. A lot of Benetton’s kicking – what kicking they did from central first receiver positions – looked like this from Allan.

The idea here was to tempt a kickback from Munster, which they often got, although in this instance the Munster exit lead to a lineout that Benetton ultimately scored from. In the early going of this game, Benetton did a great job of kicking from positive positions to pressurise the Munster exit.

Look at this sequence here;

This is an excellent kick from Duvenage – and very easy to botch or cough up a transition on – and from the resulting lineout, Munster exit quite poorly, even though the maul platform was ideal.

I’m not sure if this was a contestable, a touch finder or a mixture of both, but by losing the contest off a maul set up, Benetton had a clear gap of broken field to aim for. 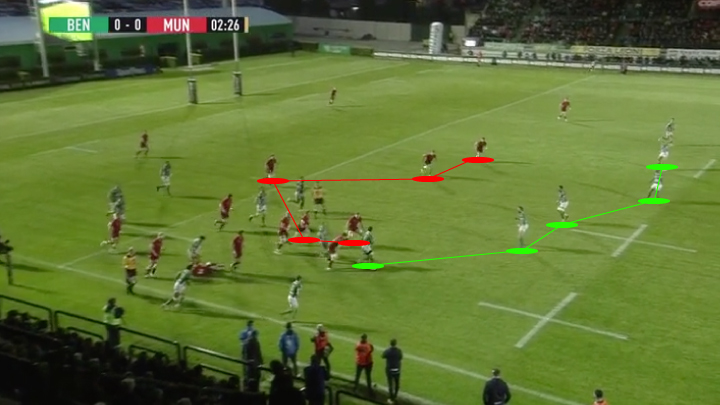 We just about closed the door on this opportunity, but Benetton went wide-wide on the next phase to stress our defensive edge reset.

Getting the ball into Tavuyara’s hands at the end of this transition attempt is exactly what Benetton want from these kinds of situations and he almost gets an offload away that would have created a 2-1 isolation on Conway.

From there, Benetton try to inject tempo around the ruck, carrying tight off the recycle and trying to prevent a ruck reset;

We do well enough to keep structure here but the pace of their reset tempts us offside on the last ruck. That gives Benetton a great 5m lineout possession, from which they earn their first three points.

Benetton are very dangerous from these positions and we’ll need multiple breakdown threats to keep them from chaining these high tempo phases together so I’m not at all surprised to see Cloete selected at openside instead of O’Donoghue for this one.

Their first try came from another poor exit in the aftermath of a breakdown transition. After resetting post-steal, we set up for a long box kick contestable kick.

As well as being dull, these long kicking rucks act in much the same way as kicking off the back of a maul, with all the transition trouble that comes with that.

There are seven Munster players in shot here – more than I’d be happy with in a maul in this position. 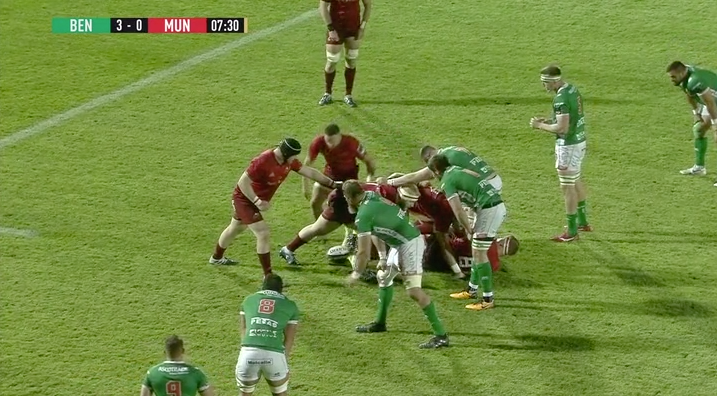 When Mathewson kicks, you can see the cluster of forwards moving up through the line and creating the space that Benetton would attack through Tavuyara.

It’s not even a bad kick, really, but when Sweetnam can’t influence the high ball, you can see the same “maul space” appearing in the aftermath. 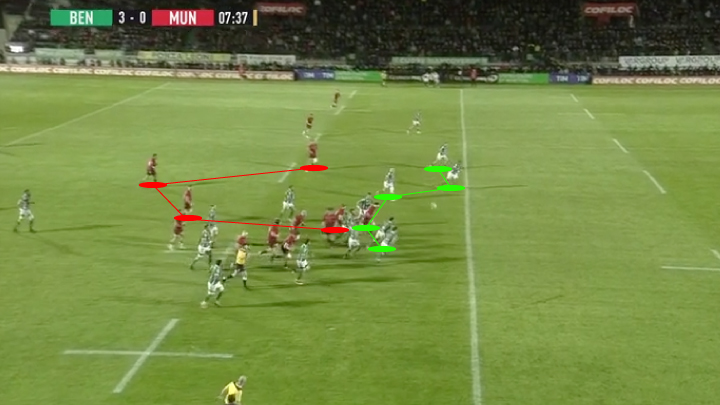 Benetton are in rough position to attack the transition by the first bounce, while we’re chasing the landing. Look at our shape around the cluster of forwards – they’ve all stayed in the same lane as the kick launch – and the space it leaves on the outside.

Look at the space in the aftermath of the last two kicks;

If we leave similar spacing in this one, we’ll give Benetton the same transition opportunities and, like here, they will score them. This took it to 10-0.

Munster fought back with two tries but Benetton’s next score game from a penalty earned in the aftermath of this kick transition off, you guessed it, maul position.

Their next three-pointer game off a lineout in the aftermath of the kick downfield from Allan shown above.

Benetton should have scored from a kick transition later in the half off a poor kick downfield from Haley;

Only a monster tackle from Arnold saved another try under the posts here after Tavuyara’s outrageous chip on the edge of Munster’s defence. He and Ioane are exactly who Benetton want to get the ball to on transition events like these and it’ll be up to Munster to limit their transition opportunities.

I’m not saying that we shouldn’t kick, we just have to kick well. All of our points in the second half came in the aftermath of kicks – good kicks.

Each of these three kicks lead to 17 of the 20 points that Munster scored in the second hand. The quality of Munster’s kicking – box kicking, edge kicking and kicking from first receiver – will be hugely important.

If we can manage to be accurate there, we’ll be right where we need to be.